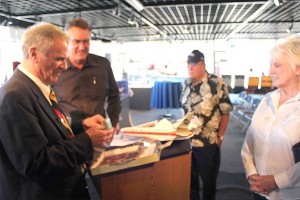 On Sept 24, 2013, my dear friend John Clayton, radio news professional and former public relations director for Continental Airlines, recalls great moments from his years with “The Proud Bird with the Golden Tail.”

As luck would have it, I had jotted down the time of the venue weeks before but I punched in the wrong number and I thought it started an hour later. So by the time I got to the Flight Path Learning Center, John’s lecture was almost over. Despite my tardiness and cameras that were misbehaving, I did capture whatever was left of his interesting story.

The room was packed. His audience comprised mostly of seniors who I guess were linked to Continental at some point in their lives. In fact, I was fortunate to be given a seat with a view of John (even though it was through a glass display — as evidenced in the video).

John must have chocked 3 times as the memory of his adult career melted away in the hands of failed management. John, in his inimitable style, had several “final remarks” yet the crowd did not seem to mind. Such was his hold of the audience.

After his talk, people lined up to greet him. He had many fans. John, although visibly tired from speaking a full hour standing up, was the perfect gentleman and was patient with everyone. One of the last people he conversed with was a girl who seemed not yet in her teens. She said her dream was to work in the airline industry. John gave her fatherly advise and told her one of the perks of working for the airlines is having a free pass to anywhere as long as there was space in the plane. Her little eyes brightened up.

If anyone is interested, John will have a return engagement at the Flight Path Learning Center (http://www.flightpath.us/) on November 7, 10am (mark the time correctly!). This time he will be paying tribute to the day that changed the course of World War II. It’s called the “Annual Salute to Military Aviation: D-Day Remembered.