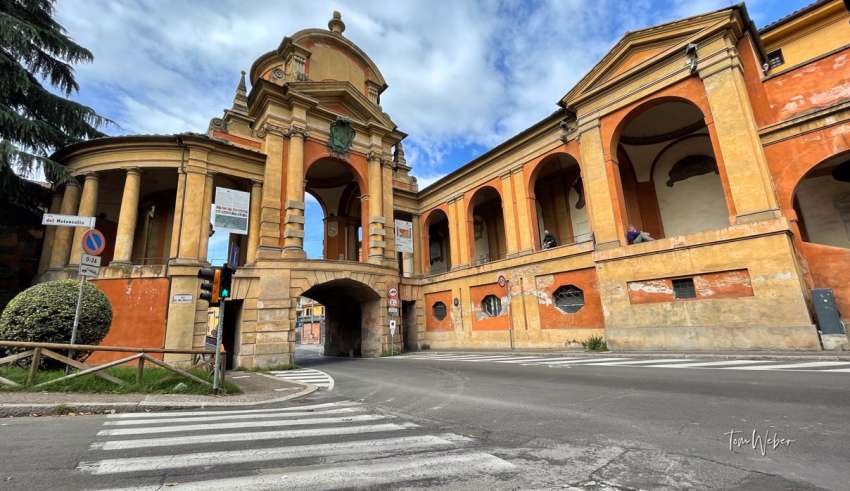 Bologna, the capital city of the Emilia-Romagna region of central Italy, had, until recently, three unique sides to its personality: La Dotta (The Learned), because the oldest university (1088) in the western world, where the poet Dante studied, was founded here; La Rossa (The Red), because of the terracotta-colored roofs, and, to a lesser degree, its penchant for left-leaning politics; and, La Grassa (The Fat), because of all of the great, original cuisine found within its postal code, like ragù, lasagne, mortadella, along with Lambrusco and Pignoletto wines.

The triumverate of this ancient medieval grid of a city — the very first Italian commune to abolish slavery in the 13th century — has stood the test of time, but now there’s a new moniker nudging its way to the forefront of Bologna’s spirit and spotlighting all of those ornate arcades. Last year, UNESCO listed 12 of the most significant sections of the archways of Bologna as a World Heritage Site, recognising them as an identifying element of the metropolis and proclaiming The Learned, The Fat and The Red (insert trumpet sounds here), La Città dei Portici (The City of Arcades).

No other city on the planet has more arcades than Bologna. In the centro storico alone, there are more than 42 km of covered walkways, with an addional 20 km of porticoes meandering outside the city gates. It’s an international record that the city has been holding onto for more than 900 years and that today, together with its remaining 22 neck-craning towers, including the leaning Garisenda Tower, and tasty tortellini — in brodo or with butter and sage — are the cornerstones of Bologna’s urban identity

Strolling through the vaulted passageways — dry when it rains, shady and cool when it’s hot — you find yourself surrounded by these architectural masterpieces built out of brick, stone or wood since the 12th century.

The most famous and longest arcade in the world, stretching 3.79 km, is the Portico of San Luca. It starts at Porto Saragozza, one of the city’s original 12 gates, and is supported by a devilish 666 arches.

If you’re on foot — the absolute best way to experience this grand portico — you arrive at the halfway mark, Arco del Meloncello, crack a left and then it’s all uphill from there, sans defibullators, to reach the Sanctuary of the Madonna of San Luca. Catch your breath, have a look around, then do an about-face and head back, the best part of the walk, because it’s all downhill.

If you’re in a hurry, you can hop on the San Luca Express, a tourist train that leaves Piazza Maggiore just about every half hour between 10:00 am and 5:30 pm. Or, catch bus 20 in the city center and ride it to Arco Meloncello, alight and climb the remaining 2 km in the shadows of the remaining porticoes up to the sanctuary.

Either on foot, tourist train or bus, you’ve got to experience the Portico of San Luca, just like you have to savor ragù, when visiting Bologna. Afterall, she’s not called La Grassa for nothing, nor La Città dei Portici.

A major transportation hub, almost all trains — local, regional or the super-fast, high-speed Frecce or Italo — stop at Bologna’s main railway station. From there, hail a taxi for the ride to your hotel.

National and international flights take off and land at Bologna’s Guglielmo Marconi Airport. From there, hail a taxi for the 15-20 min. ride to the city center, or hop on the Marconi Express that zips you to the main train station in just 7 min.

For the best hotels, restaurants, city itineraries and current and future calendar of events, look no further than the Bologna Convention and Visitors Bureau’s website: Welcome to Bologna.