Riding on the heals (not the boot) of Stanley Tucci: Searching for Italy series, Trivia 52 will be devoted to the gastronomic regions of Italy. As always, no one will see your answers except for you.

You have completed Global Trivia 52. 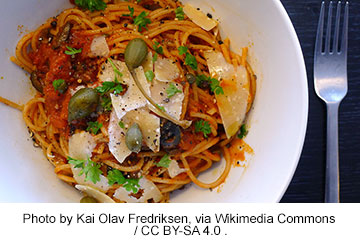 Do Italians twirl long pasta in a spoon?

Eating a bowl of spaghetti can be a challenge. Probably the most unwieldy of all pasta types is predestined to splash sauce everywhere – and especially on the places it shouldn’t. No cutlery seems capable of delivering the long pasta strand safely from dish to mouth. Good thing, then, that there are at least spoons to twirl the spaghetti against, right? Delia Martina Landwehrmann, Executive Chef at LSG Sky Chefs, knows whether doing so is socially acceptable in Italy.

“Absolutely not,” says Italy expert Landwehrmann. “Eating spaghetti with a spoon will, at the least, be met with double takes from locals. What’s even worse is cutting it with a knife. Etiquette dictates we only use the fork and the plate. To avoid an awkward bite due to too many noodles being grabbed, it’s best to fork up noodles from the edge of the dish and not in the middle.”

The fact that eating spaghetti causes so many problems for non-Italians could have something to do with another widespread misconception. After all, pasta is usually eaten as an appetizer and not as a main course. It is therefore served with less sauce than chefs in other countries who simply want to feed their guests. This also explains how Italians manage to avoid stains. 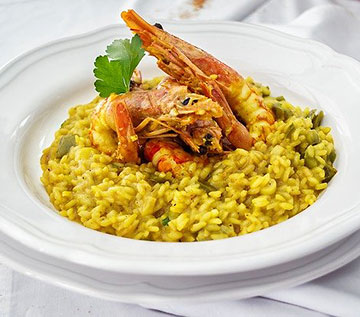 Name the region that claims risotto as its birthplace. 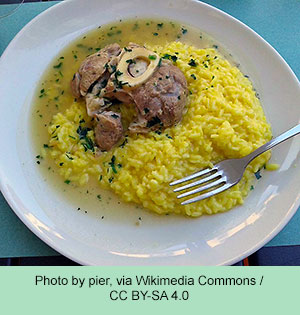 The Origin of Risotto

It was in Milan, Lombardy where risotto alla Milanese was born. Milan had been under Spanish rule for almost two centuries (hence the similar evolution of paella in Spain), and rice had become a staple. Slow-cooking also dominated the culinary landscape of the region, with Osso Bucco a long-held favorite.

History tells us that a master glazier of Milan's duomo to thank for risotto alla Milanese, the creamy rice dish that gets its vivid color and flavor from saffron. In 1574, the master hired a disciple nicknamed Zafferano because he used saffron to stain the glass gold. The master teased, "You'll be putting saffron in your risotto next!" Well, it happened that his daughter was to be married. At the celebration, a table held four steaming pots of risotto. The guests were amazed to see it was tinted gold — the wedding gift of all wedding gifts.

What You Will Need

Heat stock and saffron in a 2-qt. saucepan over medium heat; keep warm. Heat butter in a 4-qt. saucepan over medium-high heat. Add onions; cook until soft, about 4 minutes. Add rice; cook until lightly toasted, about 4 minutes. Add wine; cook until evaporated, about 2 minutes. Add 1⁄2 cup warm stock; cook, stirring, until absorbed, about 2 minutes. Continue adding stock, 1⁄2 cup at a time, and cooking until absorbed before adding more, until rice is tender and creamy, about 16 minutes total. Stir in marrow, if using, and Parmesan; season with salt and pepper. 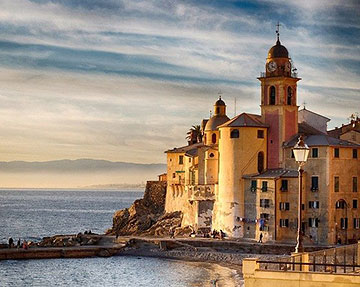 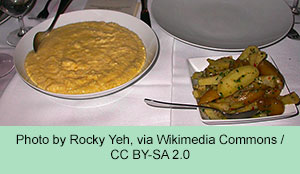 If I wanted to be racist, I would refer to Paolo as a 'polentone' as he was born in Bergamo, a city in Northern Italy.

Terrone  is a slur for southern Italians. A terrone is exactly the stereotypical wop.

Insult widely used by northern Italians to call those living in the southern (some would even say mid-south) part of Italy.

Northern Italian: "These terroni have given us such a bad name... going around acting like the terroni/wops they are, you see how everyone identifies the entire country with them!?"

Terrone: "We got the sun, pizza, spaghetti and the sea! beautiful Italia!" 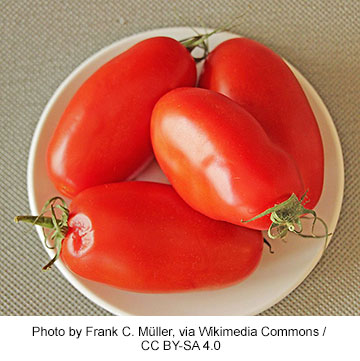 San Marzano tomatoes are native to the Campania region surrounding Naples, Italy, and are grown in a unique Mediterranean micro-climate with nutrient-rich volcanic soil from Mount Vesuvius. 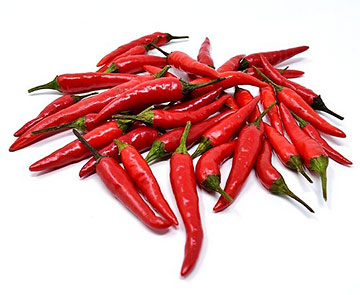 Name the region that produces the most Chili Peppers in Italy.

The black peppercorn was highly expensive, so many Southern Italians, particularly in Calabria, used chili pepper as an alternative. With Southern Italians as the main immigrant group from Italy, people often incorrectly assume that all Italian cooking means the inclusion of the spicy, red hot pepper. 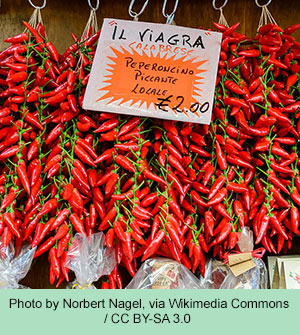 The use of black pepper in India, where it was originally found, dates back to at least 2000 BCE ‒ back when human civilization was just starting out (it’s comforting to know that mankind knew good cuisine before anything else).

In Europe on the other hand, similar to the history of many of the world’s most popular spices, to find black pepper meant looking in the pantries of the wealthiest families of the time. Also referred to as “black gold,” black peppercorns held as currency throughout the Middle Ages, and were an extremely prized trade good, most likely because it could only be found in one unique geographical area. Evidence supports the presence of black pepper in trade routes from as early as 1000 BCE when traders from South Arabia had a monopoly on exotic goods and traded with the Ancient Greeks and Romans, where it became widely popular despite its cost. In fact, in order to protect the exotic nature of black pepper, traders often exaggerated the lengths they went to for their customers ‒ wouldn’t you buy seasoning guarded by a dragon?

“Diavoletto” or Little Evil: The Chili Pepper from Southern Italy

One of the most beautiful colors of summer in southern Italy is the deep red of chili pepper. In particularly, Calabria is the main producer and consumer of chili pepper – peperoncino in Italian.

The chili pepper plant has 85 varieties and they can be distinguished based on their level of sweetness. On the scale which measures the heat of peppers, peperoncino ranges in the middle.

Peperoncino: from South America to Worldwide

Chili peppers were grown in 4000 BC in Central America, but it was only with the arrival of the Spanish during the Colonialism that the plant was introduced also in Europe and then in Asia and Africa.

Typically, hot countries have a spicy cuisine as a natural means of cooling down the body through perspiration. In effect, hot peppers contain a substance that produce a burning sensation in mouth and eyes, runny nose and perspiration. This is all a plus in the hot climates where perspiration helps to cool down the body.

Today, this spice seems to be growing in popularity around the globe. Hot pepper adds like fish, vegetable, pasta sauces, soups and eggs. In Southern Italy ground chili peppers are added to special cured meats and cheeses too, or they are preserved in oil to produce a spicy version.