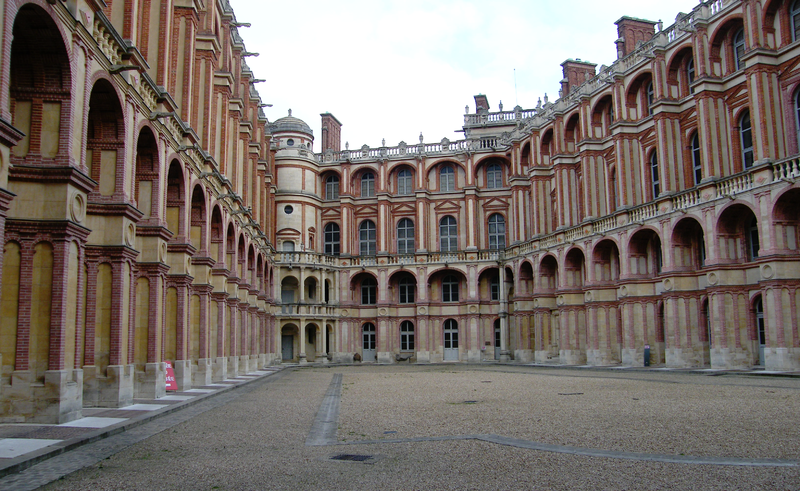 “The Château de Saint-Germain-en-Laye was one of the three main royal palaces of the French monarchy,” explained our guide. Standing beside her on the courtyard, we listened to her words with rapt attention: “The French royalty was once nomadic, where they would travel between the Château and its two other monarchical residences: Château de Fontainebleau and Palais du Louvre.” Then added, “This would all change when Louis XIV, the ‘Sun King,’ transitioned the royal residences into one, with the newly constructed Château de Versailles, still the largest palace in Europe today.”

I was a little cloudy on the Château’s history, but did recall that our Sun King – who still leads the pack with the longest royal reign in history – had transformed the Palais du Louvre into the Louvre Museum. A trip to Paris would never be complete unless there was a stroll from the Louvre to the Place de la Concorde through the Tuileries Garden. I’ve always found its open-air space of green lawns, gardens and monuments enchanting; as they once were when becoming a public park after the French Revolution, giving poverty-stricken Parisians a temporary reprieve from their haphazard living quarters on dark medieval streets

The Château de Saint-Germain-en-Laye (Château-Vieux: Old Castle) is considered a shining star in the Rayonnant (radiant) period of French Gothic architecture. Gradually built on the foundations of a medieval fortress; its overall architectural design consists of a pentagon with five walls and five angles. The inner courtyard and moats are spread over an area of 12,000 square feet. Our guide pointed out its grand portals and west wall, adorned by a large Gothic rose window.

The Château has housed the court of James II of England in exile, a cavalry school under Napoleon I (Bonaparte) in 1809, and finally a military prison with the advent of the French Revolution in 1848. Among its most famous prisoners was Rouget de Lisle, composer of the French National anthem, La Marseillaise. In 1863, the Châteauit was classified as a monument historique.

King James II, known in France as Chevalier de St. George, lies buried in the nearby Church of Saint-Germain. During the final Jacobite uprising of 1745, Charles Edward Stuart (the Young Pretender, Bonnie Prince Charlie) was unsuccessful in his attempt to take the British crown. A few of his Jacobite supporters – the few who managed to survive the English rout of the Highland clans at the Battle of Culloden – found safety at the Château de Saint-Germain-en-Laye, with new French names. The Bonnie Prince, himself, bailed to France, disguised as a woman.

Our guide turned our attention to the exterior of its chapel, one of the most popular fixtures in the Château. In 1238, Baldwin II of Constantinople presented Louis XIV with the relic of the Crown of Thorns, which purportedly had been transferred to him from Jerusalem. It was temporarily housed within the Château’s chapel, becoming one of the first French palaces to have a royal chapel used for religious services. With the Crown of Thorns or not, our groups couldn’t wait to experience the chapel’s interior. But, when our guide attempted to access its door, she was surprised to find it locked. She charged over to the administration office, pleading the importance for it to be opened. But their reply was simple: “It’s locked today.”

Throughout Europe, tour guides are highly educated and are required to take courses – not only about historical facts and stats, but how to address a tour group and even how they should stand in position when doing so. Not unlike Western European waiters or “butter boy” cabbies in London, it is a proud life-long profession, approached with utter professionalism.

So, our guide landed back on her feet, and spoke about the Musée d’Archéologie Nationale, also located within the Château. In the 19th century, Napoleon III, nephew of Napoleon I, initiated restoration of the castle, and laid the groundworks for National Museum of Antiquities, which soon displayed the archeological objects of France, the largest collection of prehistoric art in the world.

Our group followed her into the museum; overwhelmed by its collection of 30,000 artifacts and its astute prehistoric history. The museum traces the life of humankind in France where its periods are presented in chronological order: Paleolithic, Neolithic, Bronze Age, Iron Age, Roman period in Gaul, and the first Middle Ages, during the Merovingian Gaul era. La Dame de Brassempouy (the Venus of Brassempouy), is considered the oldest known realistic depiction of a human face in history. The fragmentary ivory figurine was broken from a mammoth tusk, approximately 25,000 years ago during the Ice Age, a period when humans made great progress in tool making and weaponry. At 2.2 cm in height and 1.9 cm wide, la Dame is surprisingly tiny, consisting of a triangular face of a woman in headdress, and seems to convey a sense of contentment and serenity. Perhaps the Ice Age was not as bad as I thought.

The tour was rapidly closing with our bus pulling up to the curb. But we managed to make a madcap dash to the Château’s grounds and gardens. Laid out in an Italian Renaissance garden-style, a precursor for the French formal garden, they were created by French landscape architect André Le Nôtre between1662 and 1674. From its cobblestoned Grand Terrace (Terrace of Le Nôtre), we could see the Seine River Valley and Paris in the distance. On its grounds is also the War Memorial of Saint-Germain-en-Laye, and WW II German bunkers still in place by the Terrace’s far left side.

It was a fun and satisfying day; the day of our final tour of the many we enjoyed with the AmaLyra’s tour groups and guides. Now, it was time to return to the AmaLyra for a final evening at the vessel’s dinner tables, to be shared with our new friends, and perhaps with the sound of a few D-Day Clickers in the background.