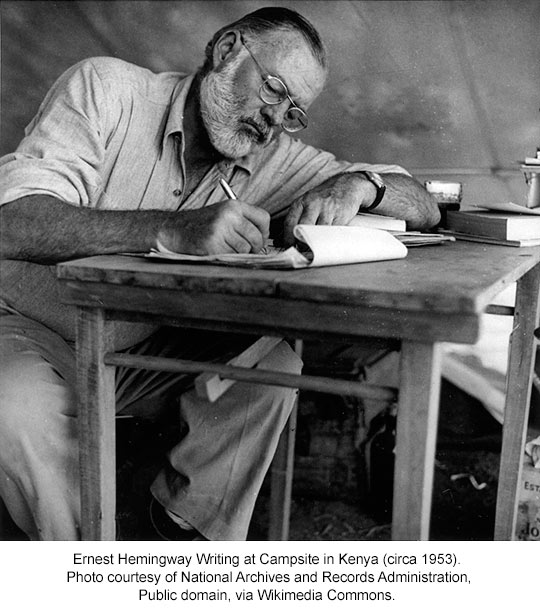 Ernest Miller Hemingway was an American novelist, short-story writer, journalist, and sportsman. With the Ken Burns and Lynn Novick three-part, six-hour documentary film series, devoted to his life, much excitement has been generated about the legendary writer and his enduring influence on literature and culture.

So, we thought the time is ripe for a Hemingway Trivia Game. As always, no one will see your answers except for you.

You have completed Global Trivia 54. 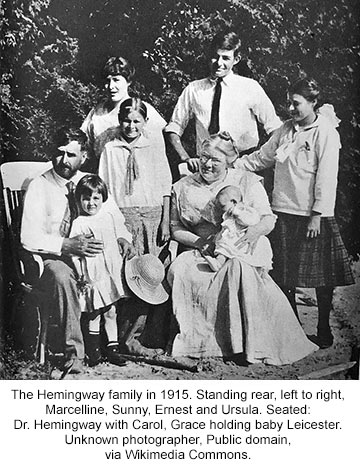 Ernest Hemingway was born in the U.S. State of Michigan. 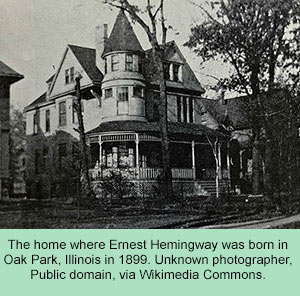 Ernest Miller Hemingway was born on July 21, 1899, in Oak Park, Illinois, an affluent suburb just west of Chicago. Hemingway was the second child and first son born to the physician Clarence Edmonds Hemingway (aka as Dr. C. E. Hemingway), and the wealthy, Grace Hall Hemingway, a former opera singer and music teacher.

At the time of their marriage, Grace Hall Hemingway had over fifty voice pupils and gave music and voice lessons, wrote sheet music, and directed the children's church choir and the orchestra at the First Congregational Church of Oak Park. She earned more money from her music lessons than her husband did as a doctor. According to her daughter, Marcelline, she was earning up to $1000 a month at one point, while her husband, just starting out in his profession, was bringing in $50 a month. Hemingway loved his father, who had carefully nurtured him to appreciate the outdoors and sportsmanship. He was not particularly fond of his mother, despite financially supporting her until her death. 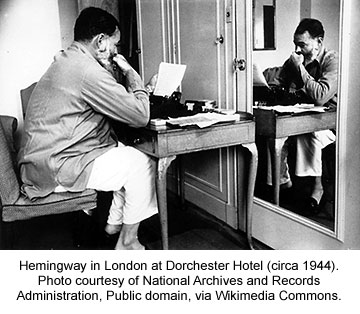 Hemingway referred to the economical and understated style of his writing by this name. 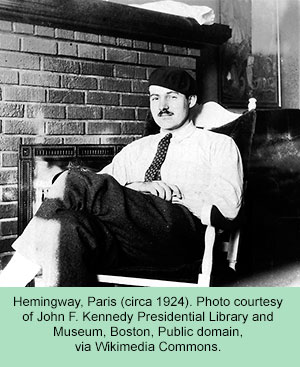 The iceberg theory is a style of writing coined by American writer Ernest Miller Hemingway. As a young journalist, Hemingway had to focus his newspaper reports on immediate events, with very little subjectivity. When he became a writer of short stories, he retained this minimalistic style, focusing on surface elements without explicitly discussing underlying themes. Hemingway believed the deeper meaning of a story should not be evident on the surface, but should ‘shine through implicitly.’

Grace Hall Hemingway taught Ernest to play the cello despite his objections. Later in life he admitted the music lessons contributed to his writing style, evidenced in the contrapuntal structure of For Whom the Bell Tolls (1940). 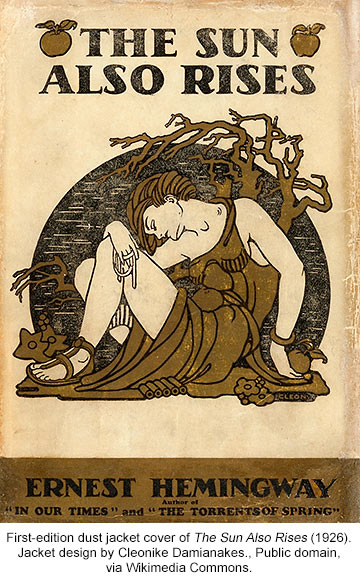 Hemingway dedicated The Sun Also Rises to this woman. 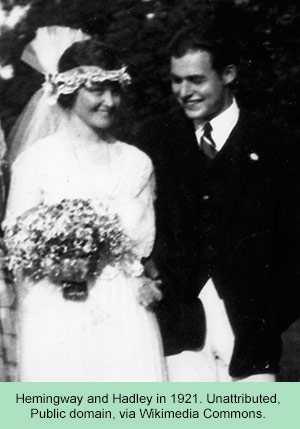 Hadley Richardson (1891 – 1979) is best remembered as the first wife of Ernest Hemingway. Born Elizabeth Hadley Richardson, she was raised by a well-off St. Louis family, and met the young struggling journalist Hemingway in Chicago. Hadley was seven years older, and despite the age difference, they married on September 3, 1921.The two established themselves within the American expatriate community of Paris – coined the Lost Generation by Gertrude Stein – and traveled around Europe and rubbed elbows with the likes of Sylvia Beach, Ezra Pound and James Joyce. By 1926, Hadley became aware of her husband's affair with Pauline Pfeiffer and separated from him. The five years of marriage ended in divorce, followed shortly by Hemingway's marriage to Pfeiffer. In the aftermath, Hadley received the royalties from The Sun Also Rises (as well as from the 1957 movie adaptation) and remained in Paris. The Sun Also Rises is dedicated to her.

Hemingway’s wives:
Ava Gardner met Hemingway in Spain. He reported fell in love with Gardner, but they never crossed the line of friendship. While in Spain, Gardner fell in love with bullfighting and Matador Luis Miguel Dominguez, with whom she had a passionate relationship. Hemingway had introduced them. She remained a life-long friend with Hemingway until his suicide in 1961. 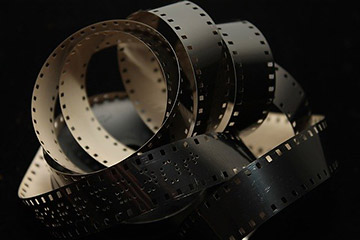 Name the Hemingway book which was adapted four times as a theatrical, non-TV, film (including one in foreign language).

Question 4 :
Answer: C. To Have and Have Not 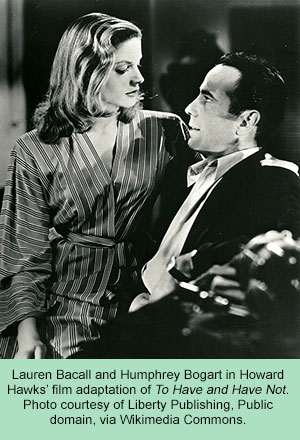 To Have and Have Not was written sporadically between 1935 and 1937, and revised as Hemingway traveled back and forth from Spain during the Spanish Civil War. The novel takes place in Key West and Cuba in the 1930s, and provides a social commentary during that period. Hemingway biographer Jeffrey Meyers described the novel as heavily influenced by the Marxist ideology that Hemingway was exposed to in his support of the Republican faction in the Spanish Civil War. The novel received a mixed critical reception upon its release.

Hemingway and film director Howard Hawks were close friends and, on a fishing trip, Hawks told Hemingway, who was reluctant to go into screenwriting, that he could make a great movie from his worst book, which Hawks admitted was To Have and Have Not.

Howard Hawks adapted the novel into a 1944 film, starring Humphrey Bogart and Lauren Bacall. Hawks made a ‘great movie’ – considered a masterpiece by cinephiles, He changed the story's setting from Key West to Martinique under the Vichy regime, and made significant alterations to the plot, including transitioning the story into a romantic thriller with Bogart and Bacall at its center. The two married shortly after.

The second film version, titled The Breaking Point (1950), was the most faithful to the original book, but could never compare to Hawks’ iconic adaptation. Directed by Michael Curtiz, the film starred John Garfield and Patricia Neal with Juano Hernandez as Morgan's partner. The movie shifted the action to southern California and made Garfield a former PT Boat captain.

The third film version, titled The Gun Runners (1958), was directed by Don Siegel and stars Audie Murphy in the Bogart/Garfield role and Everett Sloane in Walter Brennan's part as the alcoholic sidekick, although Sloane's interpretation was less overtly comedic than Brennan's. The movie features a bravura performance by Eddie Albert as a charismatic villain. Pauline Kael and Bosley Crowther have claimed that the ending was used for John Huston's film Key Largo (1948); Kael also said that One Trip Across was made into The Gun Runners (1958).

In 1987 the Iranian director Nasser Taghvai adapted the novel into a nationalized version called Captain Khorshid which took the events from Cuba to the shores of the Persian Gulf. 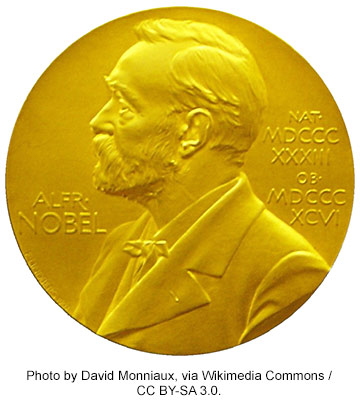 Which Hemingway novel received the Nobel Prize in Literature?

Question 5 :
Answer: D. The Old Man and the Sea 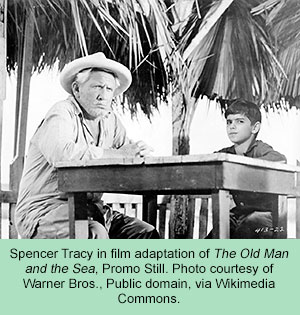 The 1954 Nobel Prize in Literature was awarded to Ernest Miller Hemingway "for his mastery of the art of narrative, most recently demonstrated in The Old Man and the Sea, and for the influence that he has exerted on contemporary style." Due to ill health he was unable to attend the celebration. The previous year, The Old Man and the Sea won the Pulitzer Prize.

The Old Man and the Sea is a short novel written in Cayo Blanco (Cuba), published in 1952. It was Hemingway's last major work of fiction published during his lifetime. The narrative focusses on a man named Santiago, an aging Cuban fisherman who struggles with a giant marlin far out in the Gulf Stream off the coast of Cuba.