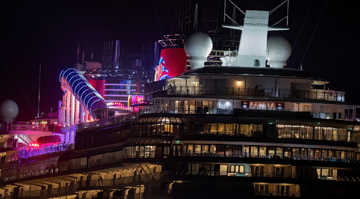 Following weeks of expectation, Disney Cruise Line’s newest ship, the Wish, has finally arrived in Port Canaveral, Florida. Nearby, about two dozen local residents watched from the quay of Jetty Park. Several leatherback sea turtles and dolphins were seen romping in the cove as the ship approached. With Florida’s Patrick Space Force Base in the background, the ship was welcomed by Disney characters at a private ceremony shortly before daybreak on Monday.