Home World Travel Rome to Rome on the Royal Clipper 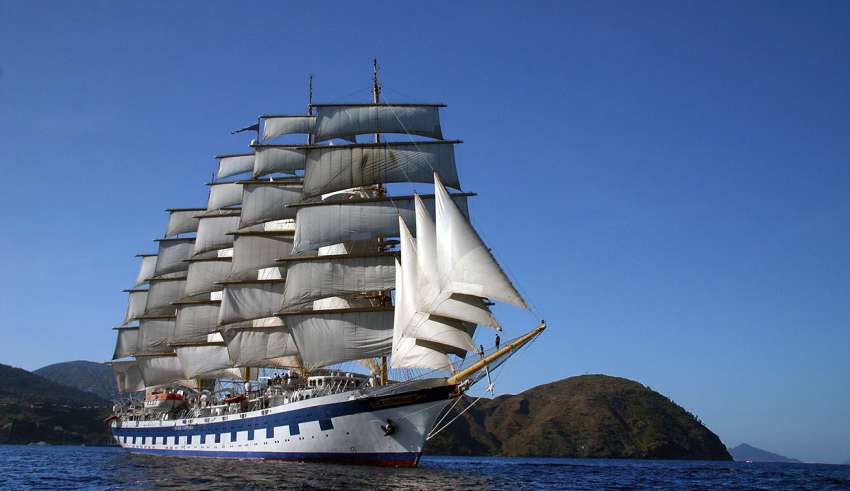 Stand by to set lower top sail,” shouted the captain. Backlit by a late Mediterranean sun, he made a striking figure in his maritime attire. “Pull sheets, lower top sail coming out!” I gripped firmly on the rope. “Heave! Heave! Heave!” commanded the first mate. My group of eight joined in unison as we pulled on the rope. I felt that the man in front of me could have worked a little harder, but the German boy at my rear was quite literally pulling up the slack. A few minutes later, the magnificent sail was towering in the wind above us. With images of Sir Francis Drake and Ferdinand Magellan, I had often dreamed of working on a real sailing vessel. This was a life-long fantasy come true. I made a mental note, though, never again to have two helpings of crème brûlée at the lunch buffet before participating in the drill.

The five-mast 439 foot Royal Clipper is the largest and fastest sailing ship on the sea today. Modeled after the turn-of-the-century Tall Ship, Preuseen – once the world’s fastest sailing ships – the Royal Clipper is a hybrid, like today’s new baseball stadiums, embracing the best traditions of the past with the state-of-the-art amenities of today. It is the real deal and does not use computers for sail handling.

Passengers can participate in sailing drills, climb the mast to one of the ‘crow’s-nests’ for panoramic views, or even take their hand at the wheel. Contemporary creature comforts include luxuriating in the spa and three swimming pools, unwinding in the Captain Nemo Lounge, sunbathing on 18,940 square feet of open deck, and dining at the world-class (no tie dress code) Clipper Dining Room. A popular spot for reading and napping is the secret Widow’s Net – a blanket-like braided net that hangs over the side of the vessel. There is a marina which offers snorkeling, sailing, waterskiing and windsurfing. What I liked best, though, was that with a maximum of just 227 passengers, you could really get to know your traveling companions in a low-key, casual atmosphere, and even make some life-long friends. I had such a great time aboard that it was almost hard to leave the vessel each morning for the day’s adventure.

Your journey will begin and end in the Eternal City, and it is essential that you spend time either before or after your cruise in this Italian capital where each step forward is also a step back into history. From the Roman Forum and Colosseum to the Sistine Chapel and St. Peters Cathedral, the attractions are endless. The Royal Clipper offers three-day add on packages, which include accommodations and sightseeing tours.

On August 24, 79 A.D. Mount Vesuvius erupted, covering the Roman provincial center of Pompeii with more than 20 feet of ash and stone. Many of the city’s 20,000 residents were killed by sulfur fires or by lava and stone. Pompeii was frozen in time until excavations unveiled this remarkable archaeological site. Plaster was poured into the empty spaces in the lava to make body casts – a man stretches out to protect his mother, a dog lays tethered by his chain. Also on display are luxurious mansions, ancient baths, temples and markets, offering an amazing insight into over 2,000 year-old Roman life.

Amalfi Coast Cancelled – On to Naples

There was a collective moan among the passengers when we were informed that the water was too rough for landing on the Amalfi Coast. We had been warned beforehand that this can be the case aboard the authentic small vessel. The moans became even louder when it was announced that the alternative would be a day in Naples: aka ‘the city that Italy forgot.’ Naples is the most densely populated city in Italy. The traffic is so intense that a simple stroll across the street can be a brush with death. I believe I was the only person on the vessel who was happy about the change in our schedule. For a trip to Naples meant one thing: I could finally sample Naples’ gift to the world – an authentic Pizza Napoletana: Thin crusted and 14 inches in diameter, with a high outer wedge to contain the Marzano tomato sauce, grown in the rich volcanic soil at the base of Mount Vesuvius. With dollops of buffalo mozzarella, this gastronomic treat is then baked in an oven made with stones from Mount Vesuvius. I was not unhappy to have the experience under my belt.

The day began with a Sicilian brunch and wine tasting at the estate of a real baroness. With Mount Etna and the Mediterranean as a backdrop, all wine and food products came from the estate. Next to the hospitality and setting, the highpoint was a simple pasta dish made with only three ingredients: olive oil, diced translucent eggplant and a dry ricotta cheese. Next stop was a bus trip on the coast road to Taormina. Perched on a terrace overlooking the sea, it a great place to sip an espresso and enjoy the local medieval character. On the edge of the town is an impressive 3rd Century BC Greek theater. The next morning it was an enchanting day-at-sea as the Royal Clipper sailed back to Rome.