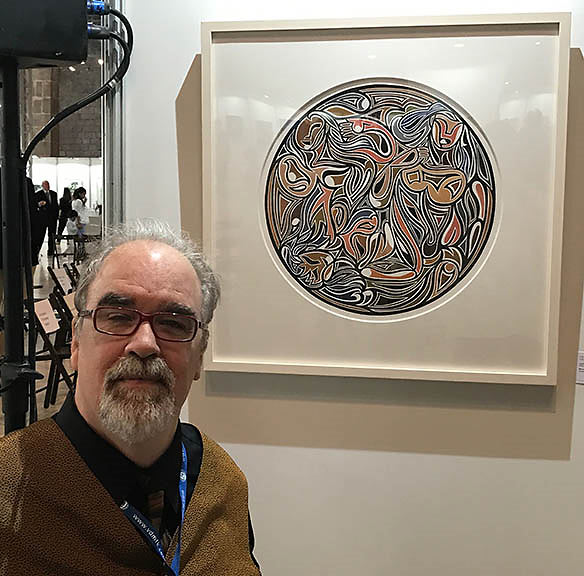 An extraordinary chain of events came together for a most amazing journey to Barcelona, Paris and London. The 60th Anniversary of an art organization that has been my sponsor for over 30 years determined that Barcelona would be the site for our celebration. We would mark the occasion by inviting our niece who had recently graduated from nursing school to join us in Spain and travel afterwards to Paris and London for her first time ever abroad.

My wife Anne and I had been in Barcelona many years ago and knew even then that we had only scratched the surface of the available cultural richness offered in the Catalan capital. We had leisurely strolled the famous Ramblas, a pedestrian area that links the waterfront with the city center where itinerant Tango dancers twirl, tarot readers ply their craft and innumerable vendors offer traditional merchandise. 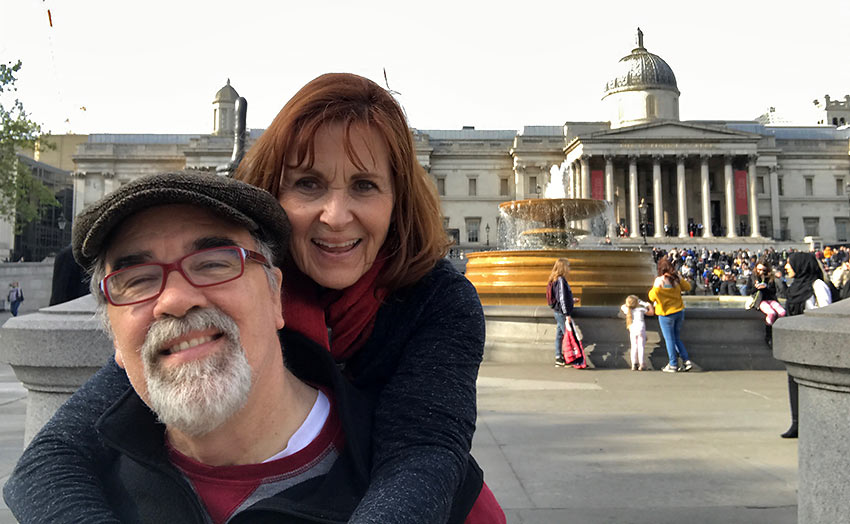 Adjacent to the Ramblas is La Boqueria, the public market that is a riot of colors, smells and energy. Yes, it can be crowded and a challenge for someone in a wheelchair at times, but to tour a site that has been in operation since 1217 and offers such an extraordinary range of goods it is well worth the effort. 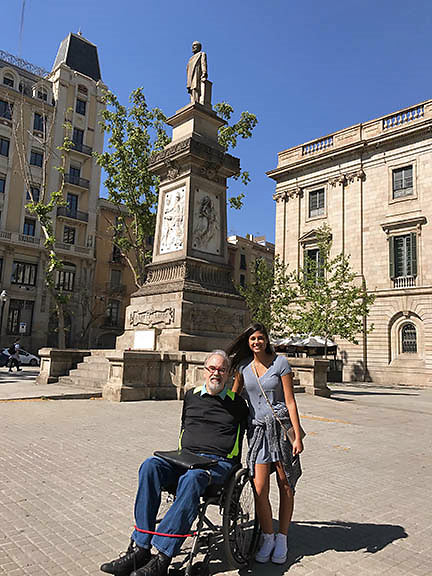 During our previous time here we had explored what we could of Antonio Gaudi’s crowning achievement, the Sagrada Familia. As impressive as it was then, we were astonished to see that so much progress has since been made and though wheelchairs still face some obstacles we were able to enter the sacred confines and appreciate the noble space. Note: It is advisable to visit closer to sunset to fully appreciate the sun’s rays through the magnificent windows.

Our exhibition was held at the Museu Maritim, a marvelous museum on Barcelona’s vibrant waterfront that details the rich maritime history that signaled Spain’s early contributions to navigation, exploration and shipbuilding. Also along the waterfront is a vast promenade that people using wheelchairs can easily maneuver to soak up the Mediterranean atmosphere and marvel at the private yachts in the harbor.

Our hosts offered excursions and we gladly boarded sightseeing buses to explore the ancient areas of the city. It was wise to start our wheeling tour at the top of the pedestrian areas and save us the trouble of struggling uphill. A very exciting outing was to the Penedes wine region and we were delighted to take in the countryside and tour an historic winery and savor the fruits of their efforts. 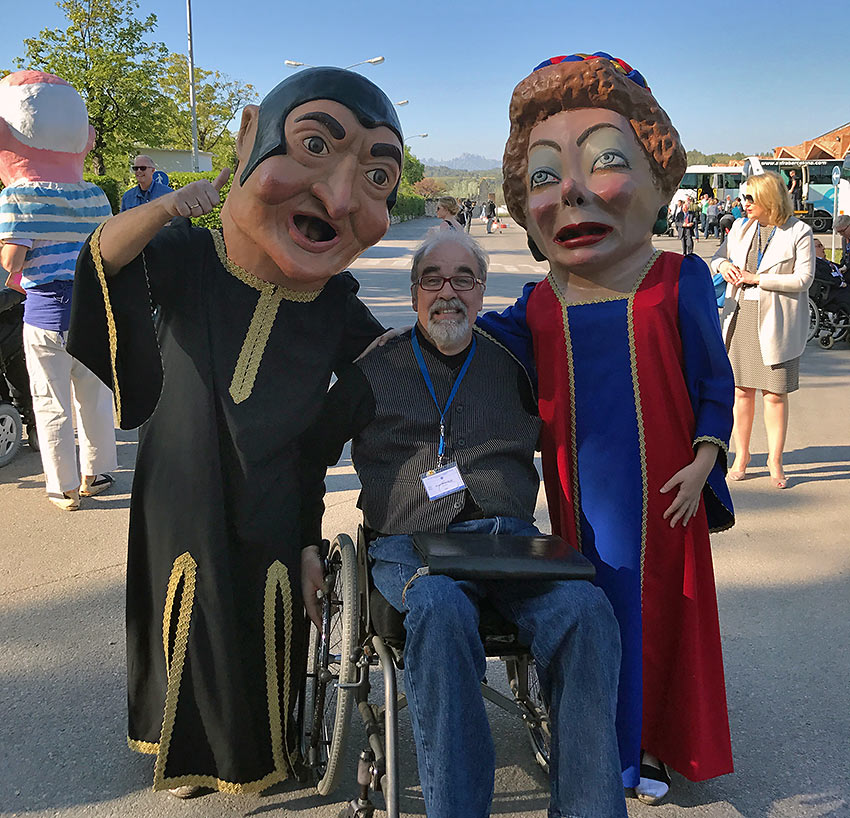 Public transportation appeared to be readily available and had we extra time we would most assuredly have visited the Picasso Museum and the Miro Foundation as well as the esteemed cathedral among other sites. 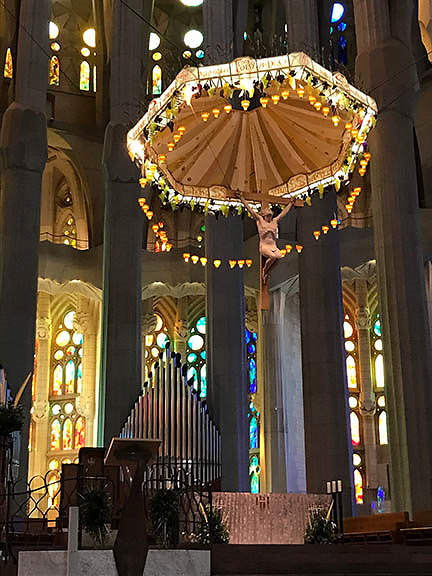 Alas, we did not have that luxury but were excited to take the early train to Paris the following day. As train stations go Barcelona’s can be as confusing and stressful as any and we were relieved to attract the attention of a station assistant who ushered us to the proper queue and made sure we got on board. Some minor confusion required me to temporarily occupy a space between cars until a following stop where I could be resituated into a proper space. We had purchased our train tickets well in advance for a reasonable sum but required a last minute ticket for our companion and were fairly aghast at the price hike for late tickets. The 5-hour trip traversed scenic fields and factory installations, small, rural towns and distant horizons. By the time we arrived at the Paris station we were rested and eager to begin the next phase of our journey.

We would only have a few days to take in what we could and thankfully we had been here many years before and had already ascended the Eiffel Tower and strolled the Champs Elysees. Anne would make sure her niece experienced those landmarks and I made sure that I would see every treasure within the Louvre and nearby Musee D’Orsay. And here I am very pleased to report that consideration to those in wheelchairs has been maintained at a high level. There is no waiting in line, admission is complimentary and even the Mona Lisa has a rope line that wheelchairs have special privilege of accessing. Other portions of the Louvre are difficult to access on account of retrofitting lifts but the staff is available and the map of the galleries is probably necessary to avoid getting lost among the treasures.

A very wise piece of advice that we had learned earlier was again in effect. Knowing that wheelchairs are first allowed into the Musee d’Orsay, we arrived before opening and were inside before anyone else. We immediately ascended to the top floor where we enjoyed breathtaking work by the Impressionists, Symbolists and Post Impressionists before the crowds of the day appeared. The museum café offered delicious meals and a welcome break from studying the masterpieces and we were fortified to see the remaining works before exiting to a drizzly and traffic congested city. Being April, we had expected as much and exercised patience as we maneuvered curb cuts and waited patiently at crosswalks.

We happened to be in Paris for Easter Sunday and took the opportunity to be in attendance at a service at Notre Dame Cathedral. We were ushered in privately and allowed to come forward to take part in the sacrament. The very moving ritual was heightened by the magnificent interior and the notes of the choir seemed to echo the angels. Afterward, I had enough time to roll to the newly refurbished Picasso Museum and was very pleased to see that extra care has been taken to assure access and again received complimentary admission.

Our apartment was only a few blocks from the Louvre but not nearly as accessible as advertised. We managed to traverse a steep threshold and narrow doorway but I was still obligated to sleep on the fold out couch since I couldn’t wedge through the bedroom door. We will take extra care in the future to measure my chair’s dimensions and recommend a portable ramp be on site.

My first time on the Chunnel to London went smoothly enough and we were glad to have purchased these tickets well in advance also as the sticker-shock for our companion was even more severe than the ride up from Barcelona. I was surprised to be served lunch with beverages and offered amenities usually reserved for first class and we arrived in London in good cheer indeed. The London cabs are some of the most accessible in the world with a short ramp that makes loading a snap and so abundant that we never failed to acquire one when needed.

Since our niece only had one precious day before her return to work, I laid back at our hotel, the Doubletree in Chelsea while they got tickets for the hop-on hop-off sightseeing bus and saw as much of the city as possible. The ticket also included a cruise on the Thames that Anne took the following day while I was immersed in the study of artworks at the National Gallery. The overground station was barely a half block from our hotel and was easy enough to access. We purchased Oyster Cards to facilitate entry and made good time getting to the sites we had planned. After visits to both the Tate Britain and Tate Modern and the wonderful artworks at the Courtauld Institute we were about as saturated with culture as we could be.

Anne had heard that a rooftop garden in one of the newer skyscrapers offered free admittance and spectacular views from the observation deck. Well, not exactly. 20 Fenchurch Street is referred to as the Walkie Talkie on account of its curious shape and does indeed have a marvelous view from a large 2-story lounge with abundant plantings and a fine dining area. Admission is free but advance tickets are required and only available online. We were able to charm the attendant to allow us admittance and would’ve been sorely disappointed had they a strict policy since Anne had pushed my chair a few miles along the Strand by then.

It was a fitting conclusion to a remarkable journey. Feeling on top of the world and relishing the combined memories of magnificent artwork and architecture, engaging with colorful and helpful people, sampling regional cuisine and being entertained by traditional performers. I am deeply grateful to my wife Anne, whose unending patience and good humor made the journey a delight and we were pleased to offer one another a special toast in celebration of our very good fortune.

Brom Wikstrom: World From a Wheelchair 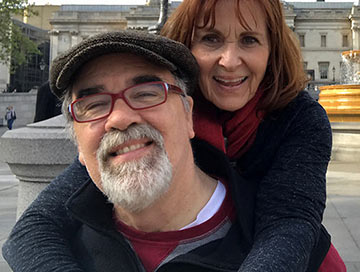 Brom Wikstrom was born and raised in Seattle, Washington. He began painting as a child, then continued to study the craft, illustrating his high school yearbook and eventually enrolling in art classes at Seattle Central Community College.

During the summer of 1975, at the age of 21, a diving accident left Brom a quadriplegic. During rehabilitation, he learned to use a mouth stick to turn pages when reading. Toward the end of rehabilitation, he started mouth painting, which allowed him to redevelop his passion and talent for painting.

Brom set up an art studio in his home where he began experimenting with geometric designs. He developed an art program at Seattle Children's Hospital and began a long association with VSA arts.

In 1994, Brom became a full member artist of the International Association of Mouth and Foot Painting Artists. His work has been shown around the globe, including the United Kingdom, Belgium, British Columbia, Austria and Australia. In 2004, Brom’s work has been featured at the Kennedy Center in Washington, D.C. He won first place for a watercolor at the Sister Kenny International Art Show and serves as Washington State Arts Commissioner.

Brom is actively involved in teaching in elementary, high schools and colleges as a visiting guest artist, but explains, “My first and foremost passion is working with MFPA, an organization that encourages continual development and growth in the world of art." 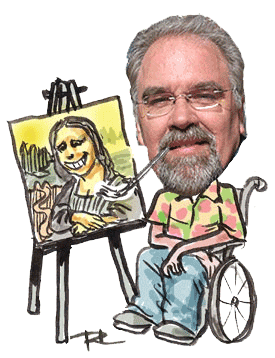 You're only limited by your your imagination.