Sorry if you were expecting something funny today. It’s not a day for jokes so move on. See you next Friday.

Whenever I do this, quite a few of my readers unsubscribe and I respect that. For the rest of you, thanks for sticking with me.

It is Good Friday in the Christian world. It is the day when Christians all over the world remember the scourging of Jesus at the hands of the Roman guards some 2,000 years ago. Yes, it actually happened on a real point in time and on a real geographic location to a 33 year old man whose only crime was claiming he was the son of God.

About 2,000 years prior to that another man, Abraham, a wealthy 75 year old man seemed to have everything except a blood heir to his earthly fortune. Then one day, he had an unusual conversation with God. He made a deal — they made a covenant … a contract! God said, “you follow me and I will take care of you and your offspring. Yes, and I will also provide you children as plentiful as the stars and sands.” It sounded like a good deal so Abraham uprooted himself and left his geographic and spiritual comfort zone to be true to his contract.

For 25 years Abe remained faithful despite some occasional ups and downs. Then Sara, his senior citizen wife, gave birth to their one and only son, Isaac. All of this is recorded in the Bible so look this up if you doubt me.

Happy father. Happy wife. Happy son. But then Abe gets this discouraging news from God. “What?!? You want me to … what?!?” asked Abe in disbelief. “sacrifice my son Isaac? The one I waited 25 years for? The one who will start my heritage as many as the stars and the sands in the beach?!? And you want me to do this to prove my love for you?!?” Oh, the struggle he must have had in his mind. Everyone else in the pagan world he lived in were sacrificing their babies but he didn’t expect this from someone he had learned to love and trust. The next morning, he was too dumbfounded, he didn’t tell anyone that he was packing up to sacrifice Isaac atop Mount Moriah. He didn’t even tell his wife Sara. Apparently, 25 years of waiting had taught Abraham a lot about trusting God.

On top of Mount Moriah, probably with tears in his eyes, looking at his beloved son, he lifts his dagger. Then suddenly he hears a familiar voice from above: “STOP! Do not lay a hand on the boy!” The test was over and it was back to Happy Days.

2,000 years later, Jesus is praying in the garden of Gethsemane not very far from where Isaac was to be sacrificed. 33 years of living as a mortal was about to come to an end. The prophecies that had sprinkled across the ages were about to culminate on this fateful early morning. “Please, Dad, I’ve done all that you asked of me … all the miracles, all the preaching … they are about to end in this unimaginable torture. But there’s too much pain. Is there any way, you can get me off the hook? Dad?! Dad?!!?!!”

Unlike Abraham, Jesus gets no response.

Jesus knew the answer. He just had to ask. “OK. Yeah, I know … I gotta go through with this,” Jesus said. “Susie’s worth this. Bobbie’s worth this … all of you who are reading this … you guys are worth this.”

This reminds me of when my son was in middle school, he came home and told us he was bullied in school. You can imagine the anger that percolated inside me. The next day I asked my son to point out the bully to me. Reluctantly, he did. The bully was sitting under the sun beside his school bag. I walked up to him, sat beside him and asked him to fess up. He stammered and said he didn’t do anything. I told him I was watching him. And then I left. I wasn’t thinking. I probably shouldn’t have done that but the anger moved me to protect my little boy. The boy never bothered my son again.

“They stripped him and put a scarlet robe on him, and then twisted together a crown of thorns and set it on his head. They put a staff in his right hand. Then they knelt in front of him and mocked him. ‘Hail, king of the Jews!’ they said. They spit on him, and took the staff and struck him on the head again and again.”
—Matthew 27: 28

God, loved us so much, that he allowed the bullies to mutilate his son’s body. Think about it. Jesus allowed it to happen and his Dad didn’t do anything. They both knew it had to be done.

It’s good Friday guys. It’s called “good” because God turned something real bad into something amazingly good for our benefit.

We have much to thank for this “good” Good Friday.

Charlie sent this to me 3 years ago. I saved this for a day like today. A beautiful song with beautiful lyrics sung by 4 beautiful voices. Simply awesome! 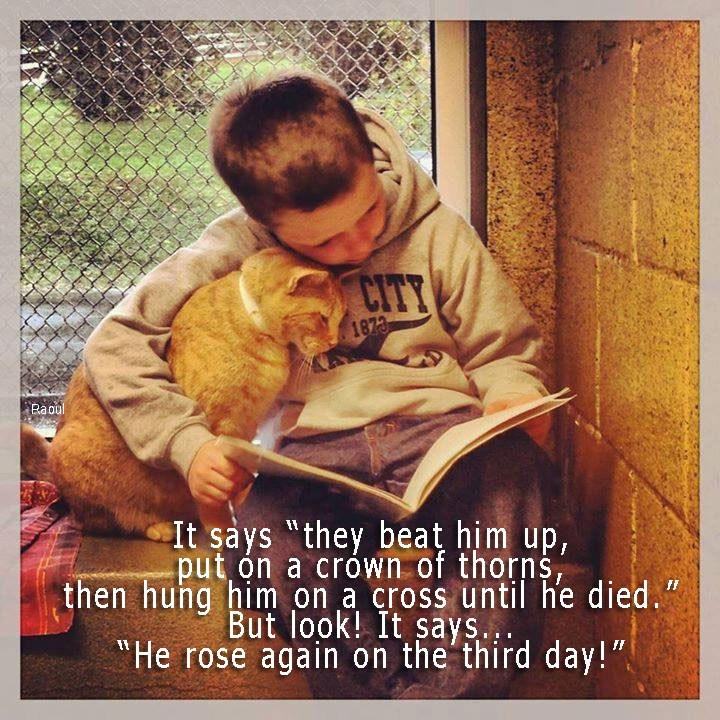