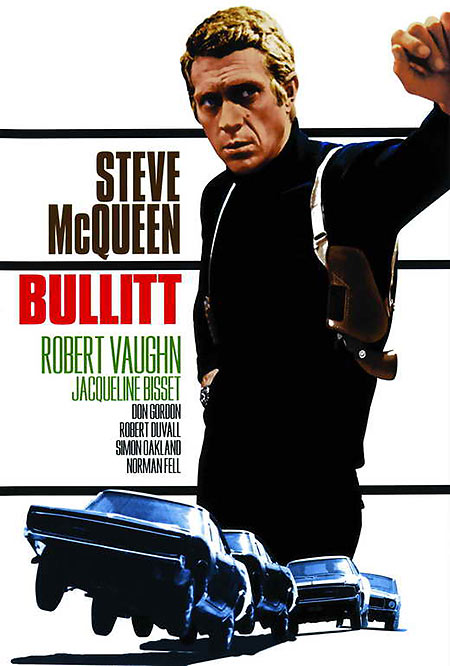 As an entertainment (“chewing gum for the eyes,” to apply John Mason Brown’s view of TV), Bullitt (Warner Bros. – Seven Arts) must be considered “a good buy”: It holds the attention for the whole of its 114 mins. Problems are mostly concealed by the film’s hip stances. 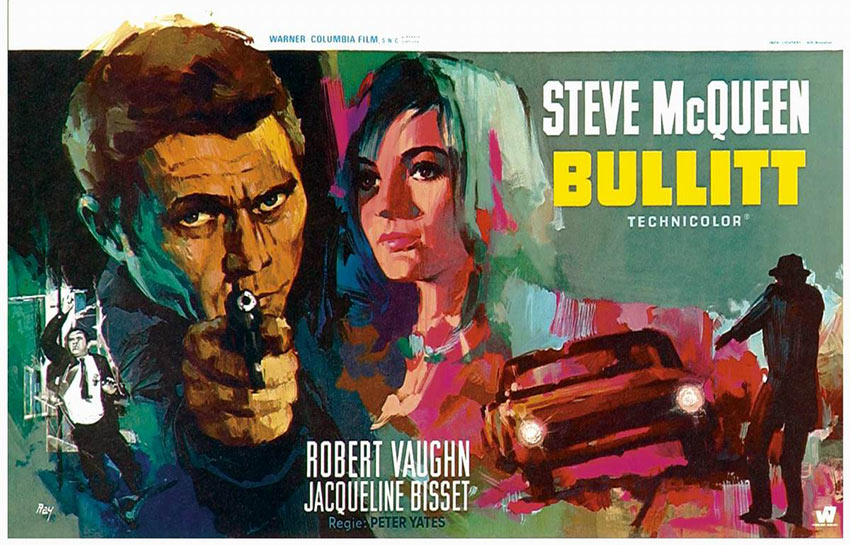 Detective Lieutenant Frank Bullitt (Steve McQueen) is assigned to guard Johnny Ross, a Chicago gangster who is to testify at a Senate subcommittee hearing on organized crime. A none-too-subtle politician named Walter Chalmers (Robert Vaughn) is overseeing the protection. (He tells Bullitt, “A Senatorial hearing has a way of catapulting everyone involved into the public eye — with subsequent effect on one’s career.”) Bullitt gives Delgetti (Don Gordon) and Stanton (Carl Reindel) the first two shifts and goes out with his girlfriend Cathy (Jacqueline Bisset). During Stanton’s watch two gunmen burst into the room and shoot both him and Ross. The mobster is given “no more than 50/50” odds of survival; Chalmers is furious. He tells Bullitt, “In your parlance — you blew it.” Ross dies during the night, and Bullitt vows, “I want the men that killed him” — less because they have committed murder than because they have made Bullitt look bad. 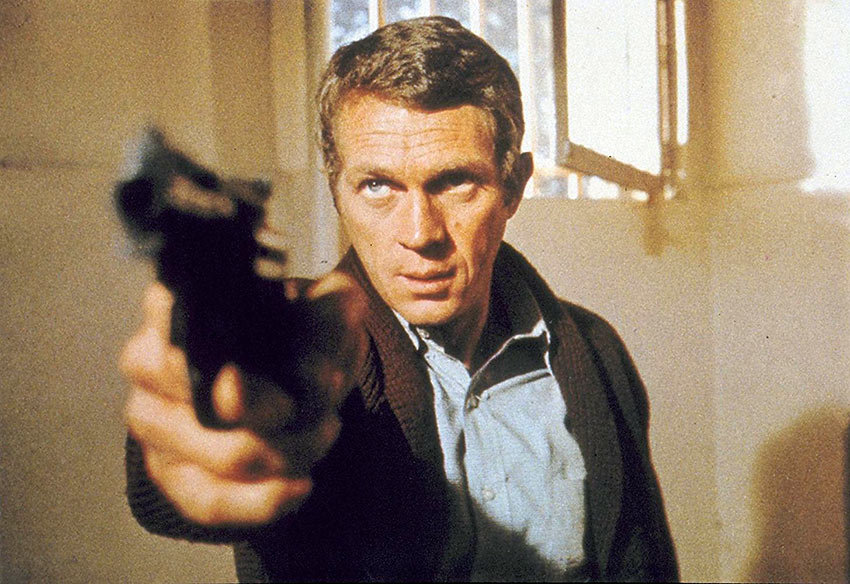 Fearing that Chalmers will close the case, Bullitt sneaks the corpse out of the hospital and refuses to confess its whereabouts. Chalmers serves Captain Bennett (Simon Oakland), Bullitt’s superior, with a writ of habeas corpus; Bullitt is ordered to reveal Ross’s death and is given only one more day to clear up the case. Eventually it comes out that the dead Ross is not Ross at all. As Bullitt waits for the real Ross at the airport, Chalmers isn’t through (“We both know how careers are made — integrity is something you sell the public”). Bullitt kills Ross in a gun battle. When he goes home, he finds Cathy asleep in his bed; the film ends as it should, on a close-up of Bullitt’s gun and shoulder holster. 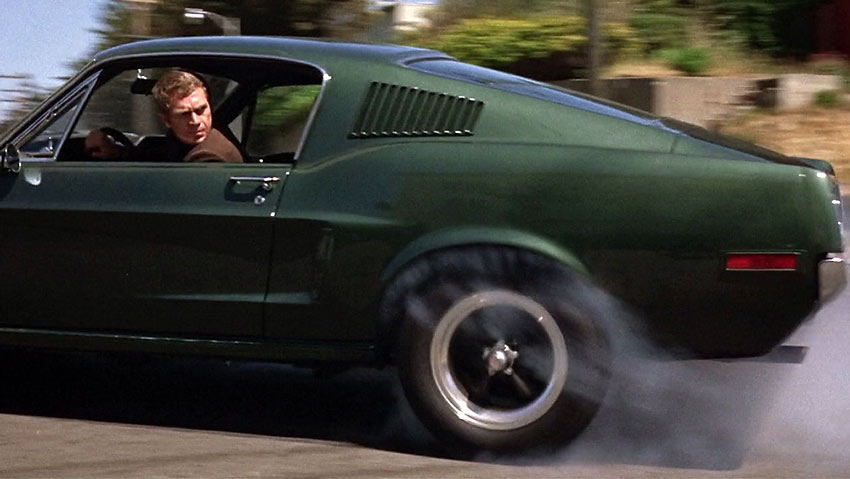 Peter Yates, a 39-year-old Englishman, has directed Bullitt with cleverness and some imagination. (Reportedly his Robbery with Stanley Baker secured this assignment.) Two sequences stand out. An 11-minute auto chase through the streets of San Francisco is movieland fantasy. The suspension of disbelief would be better served if this were a quarter of its actual length. The other is the shotgun murder of Ross’s impersonator. Rather jerky close shots of the frantic victim (“No, wait — now look — he told me —”) are intercut with close-ups of the assassin slowly squeezing the trigger; the blast hurls the bloodied Ross against the wall with tremendous force. It seems to last an eternity, and is harrowing. Yates produces many brief strokes which, after their initial impact, leave one with a feeling of rightness. The camera tracks through the hospital ward as Bullitt goes to visit his wounded officer; it comes to a stop on the tense, agonized face of Stanton’s wife at his side. She looks up at Bullitt, eyes asking why. The San Francisco locations work hard to match the McQueen coolness factor, how successfully I cannot say. 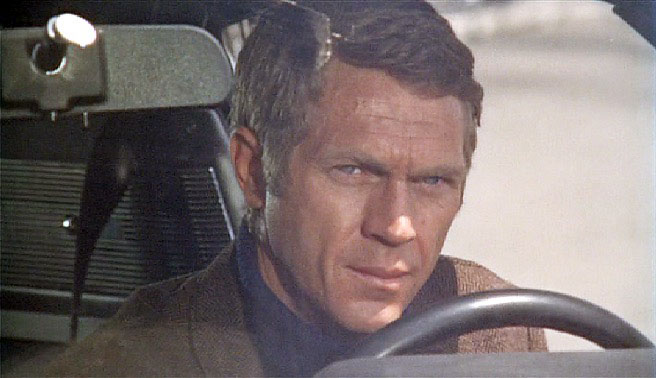 The McQueen mannerisms are present — the tight little smile, the studied nonchalance — but count as humanizing touches when the script offers so little. Robert Vaughn was not all that keen on playing Chalmers, but his silky timbre gives great pleasure. As Bullitt’s sidekick, Don Gordon is loyal and patient but not thick-headed, and Simon Oakland captures the essence of quiet strength.

Jacqueline Bisset is good enough as Cathy that she enlarges the focus of the film — an error in that it introduces themes it is ill-equipped to resolve. She drives Frank to a motel where he will question a woman, and waits in her car. When the cops converge on the motel she runs in, thinking he has been hurt. The woman is dead, and Frank is talking calmly to his partner on the phone (“Yeah? Yeah, it’s a strangulation”). Her fear for his safety travels through shock, revulsion, and finally anger. “Do you let anything reach you — I mean really reach you? You’re living in a sewer, Frank — day after day. (…) What will happen to us in time?” The film and hero seem embarrassed to have stumbled across this (and her?). 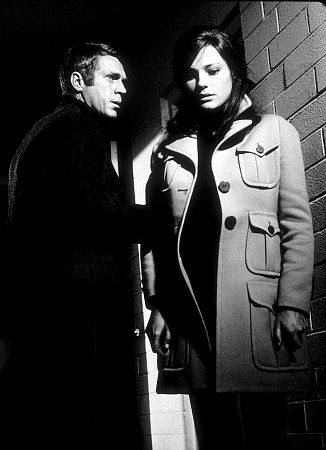 Bullitt should be seen as a manifestation of the Bogart-style private eye. As Stanley Kauffmann wrote, “The private eye was the realist’s hope for intelligence and some justice against the uniformed forces of stupidity. He stood in relation to the police as the man who really sees the score against those who see only the rule-book, and his life-style suited his life-view.” When this rebel is neatly tucked back into the Establishment, he loses most of his force and relevance. Within the power structure, the validity of an individualist like Bullitt is largely drained; he resembles a panther that is engulfed and finally smothered by cobwebs.

William A. Fraker’s glossy Technicolor camerawork is a fine job, despite a tendency to dwell on irrelevancies and trivia (close-ups of the nose of a Boeing 707, a microphone, a red light, some baggage tickets; weird angle shots; a shot through a rained-on window). The editing (Frank P. Keller) moves things along smartly without the exciting forward surge of, say, Boorman’s Point Blank. Peter Yates has made Bullitt about as well as one can make a film about nothing; too bad he isn’t allowed to aim any higher.