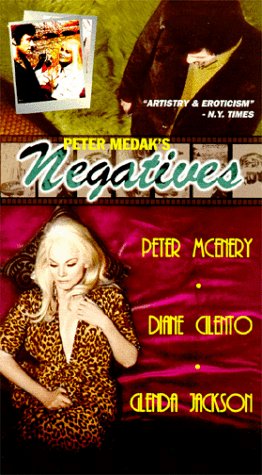 Screenplay : Peter Everett (based on his novel), Roger Lowry

Faithful to Peter Everett’s novel, Negatives (Continental) is curiously depressing. (Fifty-one years later, I would regard that as high praise!) The promising central idea clicks only in spots, i.e., when Glenda Jackson commands the moment. It remains a superficial piece of work and yet, and yet.

Negatives tells the story of Theo (Peter McEnery) and Vivien (Glenda Jackson), an unmarried couple who live above the “antiques and second hand furniture” shop owned by Theo’s dying father (Maurice Denham). The couple act out elaborate fantasies as Dr. Crippen, a wife-murderer, and Ethel Le Neve (his mistress) or Belle Elmore (his wife). Vivian is the dominant one, deciding on the game to be played and constantly ridiculing Theo. (“You look ludicrous when you make love, you know that? Such kissing and fondling, such heavy sentiments!”) Their relationship is based on role-playing. (“If we didn’t play a little, we’d have nothing to say to each other,” Vivien offers. “We go on and on. You bore me and I bore you, don’t I?”)

Into this arena comes Reingard, a German photographer (Diane Cilento). “You and the woman have certain … possibilities,” she tells Theo. “She reminds me of a friend I had in Rome once.” Reingard has been watching their games. (“It was like something you’d see in an old silent movie,” she says.) She tries to interest Theo in a new role. (“You are the absolute image of Manfred Freiherr von Richthofen.”) “Anybody can look like a murderer,” she taunts him. Reingard eventually moves in with Theo and Vivien. (“I’m sure that we will all get on very well together. Ja?”) She understands their craving for games much better than they do — “Anybody can be anything on the right kind of day.” Theo and Vivien accept her so completely that she is allowed to photograph them as they play out their roles. Reingard cuts Theo’s hair to make him resemble von Richthofen. “What the hell have you done to your hair?” Vivien asks him. “I cut it last night,” Reingard says. “Don’t you think it looks splendid?” “No, I think it looks bloody ridiculous.”

Vivien senses that she is losing Theo, but is powerless to stop him. After his father dies Theo burns the clothes he wore as Crippen. He then buys an old Tiger Moth plane and transforms it into a facsimile of von Richthofen’s celebrated aircraft. (“You are mad!” Vivien screams at him.) She orders Reingard out (“Bloody German cow!”) and attacks the plane in a fit of anger. Theo knocks her unconscious and she is taken to hospital — a fatal blow for the movie. Now alone, Theo climbs into the cockpit of his plane and imagines von Richthofen’s final dogfight. He appears to suffer a brain hemorrhage, and the film closes with Theo in the same position as the dead von Richthofen, blood trickling from the corner of his mouth.

As novelist Everett wrote the screenplay, most problems are common to both. The book is almost entirely in the present tense. Very self-conscious, but contributing to the novel’s remarkable photographic quality, recalling Robbe-Grillet’s dictum, “An image is always in the present.” Everett isn’t operating on that level yet; I miss what by design isn’t there. 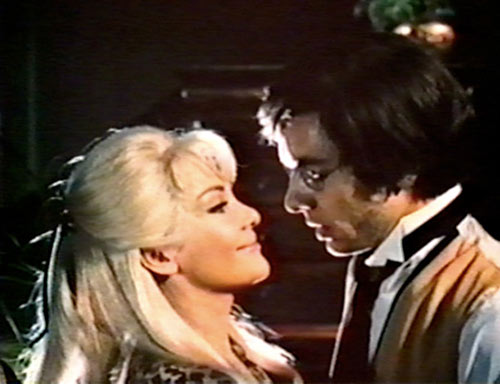 The dialogue (by Everett and Roger Lowry) has a bad case of the Harold Pinters. In 1961 Kenneth Tynan wrote, “Mr. Pinter has a whole school of dramatists speaking in his very accents; his is the new small talk, and very small, on lips stiffer than his, it can sound.” Negatives is a prime example of what Tynan meant. The speech sounds like something Pinter might have written (“We both knew it would come to that sooner or later. Did they tell you when they’re going to do it? — Next Friday. — One week … one week.”), but it rarely carries any great dramatic charge. Pinter’s dialogue is highly patterned; in Negatives it’s stilted and tiresome.

Considering the dialogue, the acting is quite good. Glenda Jackson shines as Vivien; what interest the movie has can be traced to her performance. Her Charlotte Corday in the Royal Shakespeare Company’s Marat/Sade was shattering. But sensational work so early in a career can derail it; I feared Ms. Jackson would spend the rest of her life doing catatonics and spastics. Happily, Negatives destroys that anxiety. She has placed her immense vocal authority and blazing sexuality to a different end. Vivien emerges as a scary real person, destructive and lonely. Her attempt to persuade Theo to return to her and the games they knew is moving. “Listen — maybe we could buy another bottle and get drunk … just you and I … alone … together.”

Peter McEnery is never downright bad as Theo, but he cannot fit the various sides of his performance together — fairly convincing in the scenes with his father, as Crippen, and as von Richthofen, but those aspects of the character remain separate. The touch of evil necessary to make Reingard gripping seems beyond Diane Cilento. Maurice Denham is superb as Theo’s ailing father.

Nothing much can be said about Peter Medak’s direction; he has brought Everett’s world to life with some consistency. The material does not appear to have extended him. Maybe his pretensions are like Everett’s — a tendency towards artiness and excessive technical ornamentation.

Subtlety would be out of place in Ken Hodges’ Eastmancolor camerawork here, but he does achieve some surprising color contrasts and juxtapositions. If Barry Vince’s staccato editing were less determined to kick us in the teeth with each cut, this film would move more steadily. Blame the general exhibitionism of the whole project. The music is a contract job unworthy of Basil Kirchin, but the pervasive rot it generates is most effective.

Negatives can be viewed via No-Frills Theater on YouTube. Not a pristine print.

The Addiction — A Look Back