Leaving Chautauqua, NY in a continuation of an Empire State Road Trip in upstate, NY, sponsored by the Harbor Hotels Collection, I headed toward Watkins Glen and the 1000 Islands. When traveling from Harbor House to Harbor House along the way, each hotel gave us a little cooler full of water, fruit and snacks for the 3-hour drive between the three hotels. Cool marketing ploy!

I left behind a museum devoted to one comedic icon to pursue a more subdued testament to another: From the zany and frenzied Lucille Ball and her museum in Chautauqua to the more philosophic and observational humor of Mark Twain.

Going back a bit further in time than I love Lucy, I know a lot of us shared the glories of romping around with Tom Sawyer and Huck Finn – literary classic vs. TV classic. En route to Watkins Glen at the bottom of one of the many Finger Lakes in the area, we stopped to revel in Mark Twain’s small study set on a tiny plot of land on the bucolic Elmira College campus. His authentic study, where he worked and wrote those classics, impacted me a lot more than the recreation of the Ricardo’s apartment, a mainstay of the Lucy and Desi Museum.

The study was originally situated on Quarry Farm, where Twain’s wife grew up and her family lived, and where he spent many summers. During his summer visits, Twain realized how conducive the farm was to his writing, and his sister-in-law gave him the free-standing study as a present in 1874, from which he gave the world The Adventures of Tom Sawyer, Huckleberry Finn and A Connecticut Yankee in King Arthur’s Court. The farm itself, where Twain chose to write, is now restricted to Mark Twain scholars who come there to do the same but are themselves writing about Mark Twain. Samuel Clemons, no doubt, would have been pleased. 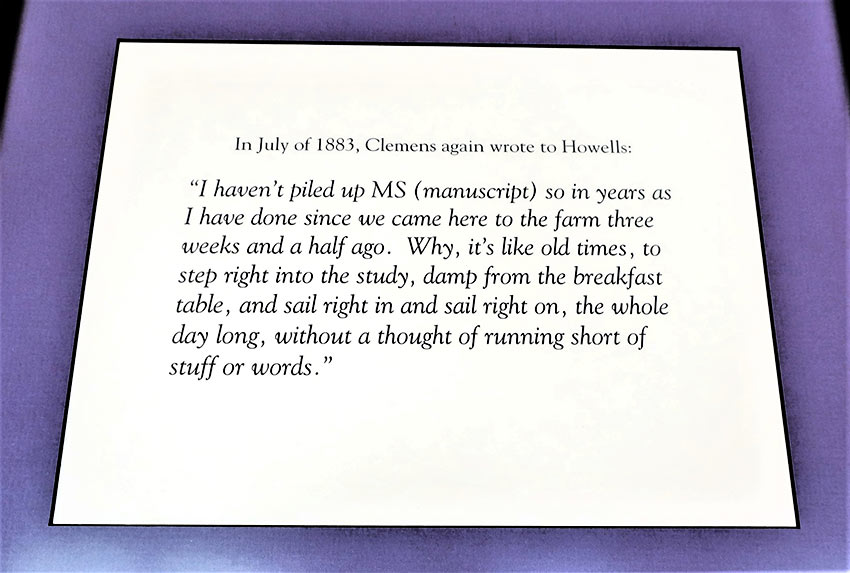 As the story was told to me by the director of Mark Twain Studies, Twain looked out at the river from his study and thought of his own life on a riverboat, and Huck Finn emerged. A powerful image. The study itself was moved to the campus in 1952 to be more accessible to the public.

Copies of his own hand-written notes on a short story he wrote in 1874 lie on the desk. Sitting in the desk chair, I could channel Twain conjuring up Tom Sawyer. Unfortunately, after several family tragedies, Twain stopped writing in his study around 1890, before passing away in 1910. But the study affords a connection to the great author and humorist that feels imminently impactful.

I waved good-bye to Mark and headed to the 1000 Islands. So with another snack box in tow, I moved from cultural icons to a culinary one. In all of my years of savoring the zesty flavor floating atop my salad greens, not once did I make the connection between the dressing and my upcoming destination.  But yes, the 1000 Islands is indeed where the dressing was first concocted and relished – so to speak… There are a number of tales of how that came about but the most celebrated is this.

In the early 1900s, a favorite activity of wealthy visitors to the islands was to hire a fishing guide. It was tradition, after a morning of fishing, for the guide to prepare a Shore Dinner – actually a mid-day feast — featuring the morning’s catch. A tradition that continues to this day.

One particular guide, George LaLonde, included a salad dressing created by his wife, Sophia, as part of his feast. One visitor, May Irwin, Vaudeville actress and cook-book author, so fancied the dressing that she asked for the recipe and shared it with the chef at the Herald Hotel where she and her husband stayed. There the newly named, by Ms. Irwin, Thousand Island Dressing was first served to the public. But it gained real prominence when she returned to New York City and gave the recipe to fellow Thousand Islands summer guest, George Boldt, an owner of the famed Waldorf Astoria who then introduced it to the world.

As an adjunct to the story, the Herald Hotel was ultimately purchased in 1972 by Allen and Susan Benas who renamed it the Thousand Island Inn with its namesake dressing becoming the “official” house specialty. Today, they own the rights to the original recipe and sell it exclusively at River Rats Cheese shop in Clayton, NY. Don’t even think about asking for the ingredients, though – that’s proprietary information – and it still remains the only dressing named for a region of the United States. And yes, there’ are so many things of interest to see on the Empire State Road Trip, but none so intimately connected to the 1000 Islands as their namesake dressing. For more information call (607) 535-3759 or visit the Harbor Hotel Collection; Mark Twain Studies; 1000 Islands River Rat Cheese.

First things first. No waterslide at any waterpark will ever be the same again -- not afte…