Hamburg Celebrates 60 Years of The Beatles Sixty years ago, on August 17, 1960, five young lads from Liverpool had their very first public appearance as “The Beatles” — live on stage at the Indra club in Hamburg. In the following two years, they would spend more time on stage than anywhere else in the world: 281 gigs, five engagements in four clubs, and a total of 1,200 hours of performing live at various local venues. With months of uninterrupted engagements and endless nights in the clubs of St Pauli, The Beatles swiftly turned into a professional live band. Hamburg is also the place where The Beatles met Ringo Starr, where they developed their unique sound and where they got their iconic haircut. Or, as John Lennon put it, the lads “grew up in Hamburg, not Liverpool.” 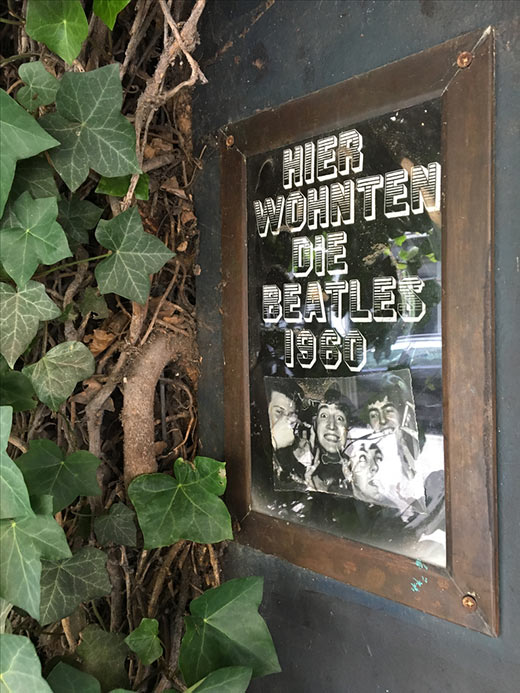 Hamburg invites Beatles fans from around the world to virtually enjoy The Beatles’ 60th anniversary bash, at the original Indra club. Stream & Shout will be available via live-stream on August, 17, 9 pm (CET), also on Facebook and YouTube. Hamburg’s Beatles expert, Stefanie Hempel, will be hosting the event on August 17th from 9 pm (CET) straight from the Indra in St Pauli. Together with her band, she will be presenting a unique rock’n’roll program — including a recreated original Beatles set from August 1960, as well as some of the Beatles’ greatest hits and legendary songs. Performing fellow musicians at the Indra will include the Kaiser Quartett, Cäthe, Bernd Begemann, Jessy Martens, Billy King, Jimmy Cornett, and Michèl von Wussow.

There will be classic pieces and new interpretations alongside entertaining stories and anecdotes from the young Beatles’ wild years in Hamburg. You can look forward to a musical discovery tour through Hamburg’s legendary St Pauli district and a big reunion of contemporary witnesses, former companions as well as fans and friends of The Beatles. Among them the Cavern Club in Liverpool, the U.S. band Bambi Kino, Beatles expert Mark Lewisohn, and a number of surprise guests.

Hamburg’s landmark, the Elbphilharmonie concert hall, will be joining in with a live-stream from the Grand Hall prior to the Stream & Shout show. Starting at 8 pm (CET), a premiere honoring The Beatles and arranged by jazz pianist Julia Hülsmann, will be streamed especially for the occasion. She will be accompanied by Nils Wogram (trombone) and Christopher Dell (vibraphone).

Make sure to mark August 17th in your calendar, so you don’t miss out on this unique live-stream event.

YouTube link for embedding the live stream from the Indra, 9 pm (CET):

YouTube link for embedding the live stream from the Elbphilharmonie, 8 pm (CET):

A comprehensive press kit with background information and stories on The Beatles in Hamburg.

Royalty-free photos for editorial use are available for download.

Switzerland, a small country that always pops out in a different color in the middle of a map of the European Union. A territory of  15940 square with more than 1,500 lakes, 8.4 million inhabitants, who speak 4 national languages – and most Swiss nationals speak at least one foreign language.

Switzerland was not made in a day, but over centuries: In August 1291, three cantons (Uri, Schwyz and Unterwalden) got together on a meadow in central Switzerland and swore to stand together — this is known as the Rütli Oath — as a confederation. In 1803, internal unrest and numerous coups d’état prompt Napoleon to issue an “Act of Mediation”, which put an end to the Helvetic Republic and restores the sovereignty of the cantons.

At the end of the Napoleonic Wars in 1815, The European powers were interested in recognizing and maintaining sovereign and neutral Switzerland in order to ensure the neutrality of the strategic Alpine passes. Swiss independence and neutrality are formally recognized by European powers at the Congress of Vienna.

In 1848, at the end of a civil war, Switzerland is transformed from a union of states to a federal state as declared by a new constitution. The country has since expanded to 26 cantons, with Jura, whose territory was previously part of canton Bern until 1978, being the youngest Swiss Canton. 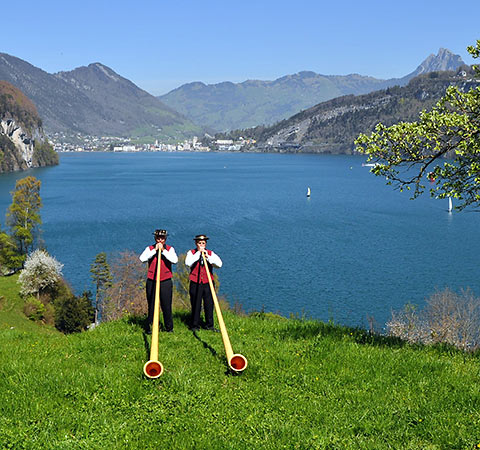 Rütli is synonymous, for all Swiss people, with the founding history of Switzerland. The myth was nourished by the impressive drama “William Tell” by Friedrich Schiller. The easiest way to the Rütli is by boat from Brunnen or Flüelen (near Lucerne). There are hiking trails to and from Seelisberg, but these are very steep and strenuous. The “Swiss Path,” a 21mi/ 34km hike around the historic Lake Uri, begins on the Rütli. In remembrance of the historic Rütli Oath, the Rütli Shooting has been staged since 1862, albeit not on the National Holiday, but on the Wednesday before St. Martin’s Day, on November 11th. 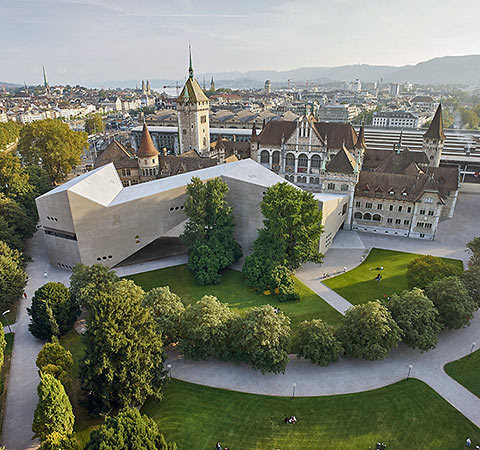 Alps and army, banks and farmers, Heidi and cheese and cantons, edelweiss and confederates — why is Switzerland like it is? The largest cultural-historical collection of Switzerland in the National Museum Zurich provides answers. The National Museum enjoys a central position just a minute’s walk from the main railway station in Zurich. The museum is one of the attractions of this city on the River Limmat. Gustav Gull’s listed building from the 19th century has been extended with the addition of a new building designed by architects Christ & Gantenbein and completed in summer 2016. 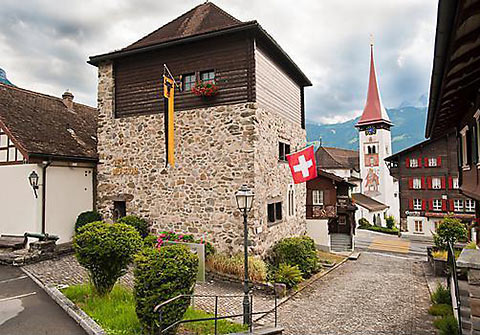 The Tell-Museum holds the most comprehensive collection of historical, artistic and original documents, pictures and objects from six centuries connected to Switzerland’s freedom fighter, William Tell, located right among the art-historical sights of Bürglen’s protected center. It also features an important collection of works by Basel painter Ernst Stückelberg (1831–1903), who had put up his studio in Bürglen and painted his four great frescos of the Tell’s Chapel on the “Urnersee” section of Lake Lucerne. While in Altdorf, don’t forget to have a look at the William Tell statue in the market place. 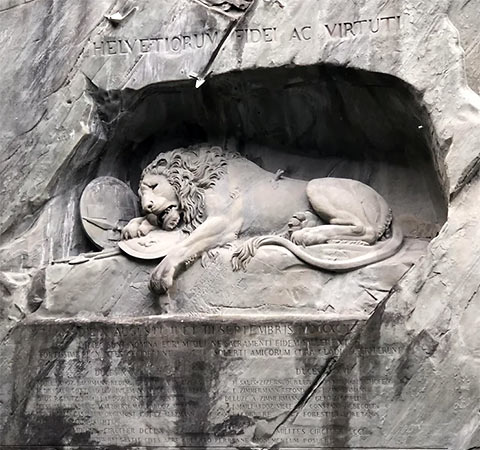 Described by American author Mark Twain as “the most mournful and moving piece of stone in the world.” The Dying Lion of Lucerne was hewn out of stone on site and commemorates the fallen Swiss guardsmen who died in 1792 during the French Revolution. When the angry masses stormed the royal palace on August 10, 1792, the 800 Swiss guardsmen stood up as the last defenders of the the monarchy — but in vain. the monument was initiated by Karl Pfyffer von Altishofen, a junior lieutenant with the Swiss guards. 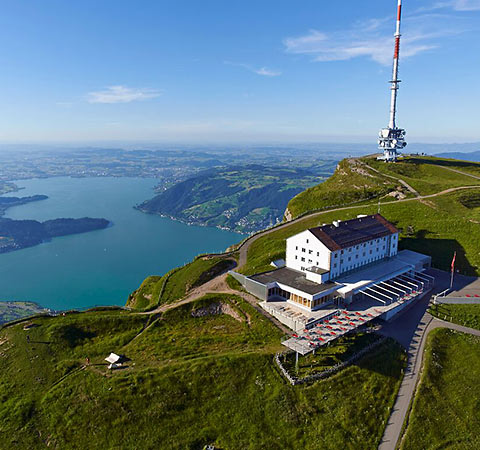 Located in the canton of Schwyz, between Lakes Lucerne, Zug and Lauerz. the Rigi is also known as the Queen of the mountains. Back in the 18th century, the Rigi’s unique location made it a famous destination for travelers across Europe. In some ways, it was the pioneer mountain of Alpine tourism. Queen Victoria, no less, was even carried up the peak in a sedan chair. Several trains dating back to the early days still operate today, with public nostalgia trips scheduled on weekends in the Summer.

Pursuit recently introduced The Ritual at Sky Lagoon, a seven-step experience inspired by …