I imagined that a story about my trip to Ibiza would be about the constant party of hedonistic abandon the island’s reputation led me to expect. Instead, while that scenario may still play out occasionally in Ibiza, mostly I saw couples in their late twenties, early thirties – often with children – and some older couples and singles of both sexes, enjoying the beaches, museums and fine cuisine in the many local restaurants.

Ibiza, once the playground of Europe’s indulged youth, has matured into a destination with more sobering pursuits. Certainly, the party reputation lends some cache to the older folks looking for some cred with their offspring, and the clubs are still there, but visitors are finally noticing the historic sites and archaeological digs as they take in the charm and beauty of the island.

Ibiza’s old town, Dalt Vila, is surrounded by the best preserved ancient walls in the Mediterranean. It is a UNESCO World Heritage Site that contains a castle, cathedral, museum, and many private homes – all of which make up the original city of Eivissa. There are restaurants and bars, and tons of funky shops (a remnant of Ibiza’s hippie era) for distractions from the history – if you need them. I enjoyed the architecture and the views from the walls. I love being surrounded by the parapets and ramparts of ancient times; they give an often crazy world some perspective.

But the history is not all contained within the walls. Spreading out below one gate is the Cuban barrio, created when those Ibizans who emigrated to Cuba returned and recreated their old neighborhoods below the walls. The distinctive architecture would be familiar to anyone who has visited Cuba.

A short drive from there will take you to the Necropolis of Puig des Molins, another UNESCO World Heritage Site, where the Phoenicians, who settled here before Christ was born, buried their dead. Subsequent conquering civilizations followed suit, so Carthaginian, Roman, Moor and Christian graves can be found here as well. While most of the graves were looted centuries ago, archaeologists still found ceramics and some jewelry in the stone coffins. I was surprised to see glass and metal that were found in some of the earliest ones. The onsite museum has a large display of them and exhibits that explain the different eras expertly.

Another UNESCO World Heritage Site (Spain has more than any other country) is the ruins of the Phoenician settlement in Sa Caleta, atop the red cliffs surrounding the secluded crescent beach and clear blue waters of Ses Salines. Dating from 654 BCE, it is one of the earliest settlements on the island. All that is left to see are the reconstructed foundations of the shelters built here eons ago.

Sharing the same vantage, and for the same reasons, are the remnants of concrete bunkers constructed in the 1930s to protect the island from enemy invasion. Below them, at the water’s edge, the rustic fisherman’s shacks line the shore providing easy access to the sea. Each element is picturesque in its own way, but together, especially at sunset, the sum is greater than its parts, and the beauty in the slanted sunlight is almost surreal. 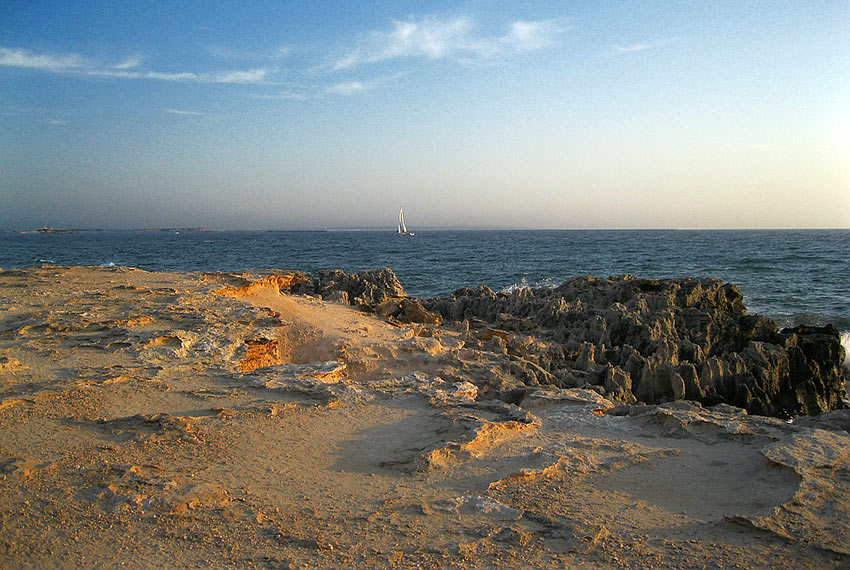 You could almost say that about the whole island. Everywhere you look you’ll find stunning architecture and scenery – even underwater. In Playa de Figueretas is another UNESCO World Heritage site, the underwater Posidonia Meadows. Billed as the largest living organism in the world, the sea bed is covered with a posidonia plant that stretches for miles. Posidonia is like sea grass and integral to the livelihood of Ibiza. Its presence keeps the water of Ibiza’s famous beaches clear, while providing food and protection to various sea creatures. Because it is a deciduous plant, its leaves are washed ashore where they pile up and protect the beaches from storm erosion. They can be harvested and used for animal bedding, fertilizer on the fields, and in the early days were layered on roofs between clay as insulation.  No wonder it is so protected!

While in Ibiza I strolled the cobblestone streets, explored the red cliffs and blue sea-caressed beaches, snorkeled the Posidonia Meadows, visited the museums, and dined in some of the finest restaurants. Oh – and I also went to Pacha, the club, to see what all the fuss was about and dance off the many calories I consumed with all that fine dining. It wasn’t hedonistic, it wasn’t drug-crazed, and it wasn’t a drunken party. It was just another side of the complexity that is Ibiza – the jewel of the Mediterranean.

To learn more about Ibiza check out http://tourism.eivissa.es