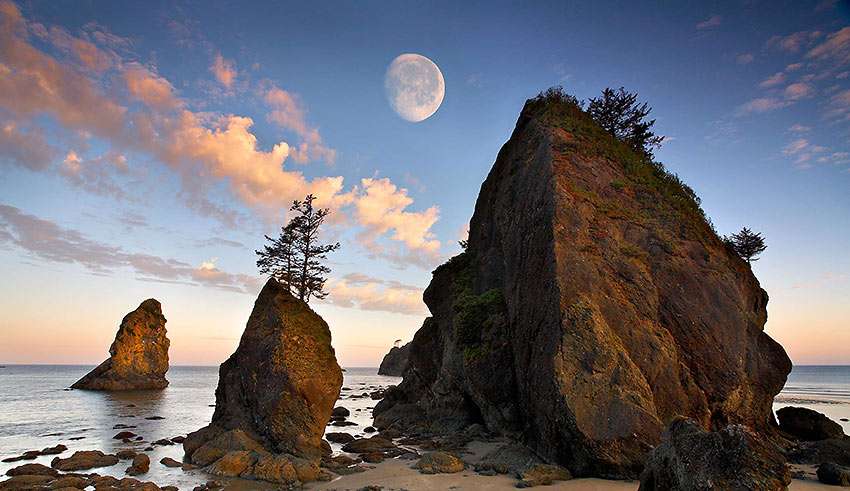 It’s almost Thanksgiving – time to admit that not everyone wants to spend three hours in bumper-to-bumper traffic making their way to Grandmother’s house for yet another meal of cold turkey and canned cranberry sauce. Veteran road trippers see a different opportunity: four days off to explore some spectacular byway that offers great views and outstanding cuisine.

U.S. Highway 101 runs north-south through the states of California, Oregon and Washington. Known at some points as El Camino Real (The Royal Road) due to its Spanish trading past, it merges at some points with State Route 1, called the Pacific Coast Highway. It is one of the most scenic routes in the United States and a favorite of road trippers, who come from near and far to cruise along the western edge of America.

One of the most dramatic stretches of Highway 101 is at its northern terminus, in northwest Washington, where the road makes a loop around the Olympic Peninsula. Here visitors can buy lavender grown the traditional French way and visit coastal villages where fishermen still sell their daily catches dockside. Its natural wonders are punctuated by many historic sites and coastal towns offering good food and lodging.

The Olympic Loop offers a host of choices to explore the northwest corner of the Pacific Northwest. Much of its landscape is as it was when Capt. James Cook explored the region in 1778, with coastal roads weaving past jagged cliffs and serene, island-flecked bays. Over one 15-mile stretch, the route travels through a section of wild Pacific coast protected by Olympic National Park; another million acres of parkland lies within the circuit of the loop. Thanksgiving week is a good time to visit, with holiday temperatures ranging from the mid-50s to lower 60s.

Visitors often travel the loop in the counter-clockwise direction, beginning north of Seattle at the Edmonds ferry. Departing on Wednesday before noon, travelers should be able to avoid Thanksgiving lineups at the terminal. The 20-minute voyage west across Puget Sound disembarks at State Route 104, which merges into Highway 101 approximately 25 miles northwest.

Before reaching the Olympic Loop, the road passes by Point No Point, a headland located at the point where Admiralty Inlet meets Puget Sound. In 1855, a peace treaty ending the Indian wars in the Washington Territory was signed at Point No Point. Over a thousand Native Americans between the Olympic Mountains and Puget Sound signed the treaty in the presence of Isaac Stevens, the first governor of the Washington Territory. A bronze plaque commemorates the event. Adjacent to the Point No Point lighthouse are 1.5 miles of publicly accessible beach that offer dramatic views of Mount Rainier, Mount Baker and Whidbey Island.

About four miles west on the Olympic Loop, past Sequim Bay, is the inland town of Sequim, known for its dry climate and lavender farms. Averaging just 15 inches of rain a year, Sequim has become a hot retirement spot in the region. Diamond Point on Discovery Bay, near Sequim, has views of the Strait of Juan de Fuca and Protection Island. To the west, New Dungeness Spit, a 6-mile flat spit barely visible from a distance, is one of the largest natural spits in the world. Capt. George Vancouver named it New Dungeness because it reminded him of Dungeness Point on England’s southeast coast, where a light has guided mariners since around 1600.

From Sequim, some visitors take a side trip up to Hurricane Ridge, in the Olympic National Park. It’s just a short drive and, at an elevation of almost 5,200 feet, it is a popular place for autumn sightseeing. This year, motorists are required to carry chains on portions of Hurricane Ridge Road beginning the week before Thanksgiving; call the park for more information (360-565-3005).

The route continues west to Lake Crescent, a good overnight stop for Wednesday. One of the deepest lakes in Washington, this picturesque glacier-carved lake offers boating and fishing along with diverse hiking trails.

Waterfalls in the area include Marymere Falls, a one-mile walk from Storm King Ranger Station at Barnes Point, and Sol Duc Falls, one of the most photographed spots on the peninsula, which is a mile walk from the end of Sol Duc Hot Springs Road. Nearby is Lake Crescent Lodge, listed as one of the best places to kiss in the Northwest. The Lodge’s seasonal dining is exquisite, with Dungeness crab cakes, French onion soup, baked wild salmon and elk rib rack among the offerings.

Continuing south on the morning of Thanksgiving Day, the route takes you from Lake Crescent to Lake Quinault, a 2.5-hour drive that includes that dramatic stretch along the Pacific Ocean. About halfway, in Forks, the Sol Duc River and the Bogachiel River merge into the Quillayute River, before they head to the sea. The nearby coastal land was aptly named Kalaloch (pronounced “clay-lock”), or “land of plenty,” by the Quinault Indians. It is a remote and peaceful place where visitors can enjoy beachcombing, fishing, hiking and exploring.

Built in 1926, Lake Quinault Lodge is a rustic, historic retreat and the perfect place to spend Thanksgiving. The Lodge’s $27 Thanksgiving buffet features roasted acorn squash bisque, poached salmon, cider and honey-brined turkey with cranberry pesto. Save room for the white chocolate bourbon pecan pie, the Lodge’s signature holiday dessert. If you need a pick-me-up after the feast, just put on some walking shoes and head out the door. Over 250 miles of hiking trails are located in the Quinault Valley, and 15 miles of them are within walking distance of the lodge.

Heading east on Friday, your destination is Alderbrook Resort and Spa, a luxury property located just off the loop on the scenic shores of Hood Canal. The resort will already have its halls decked for the Christmas holidays with more than seven miles of lights adorning the property and a 50-foot holiday tree set up on the waterfront lawn. The resort’s “Under the Mistletoe” package commences the day after Thanksgiving. Upon arrival, guests will be greeted with a bottle of wine and a $50 dining credit for The Restaurant at Alderbrook. A Saturday morning walk along the shores of the Hood Canal, a glacier-carved fjord home to eagles and ospreys, salmon and seals, is the perfect conclusion to this Thanksgiving holiday and a nice nod to the Christmas holiday season.

This One’s for the Ladies: The Best Cities to Meet Manned-Up Men

In this not-so-brave new world, adult men, regardless of economic factors, are increasingl…

Sarah Wyatt is a freelance travel and outdoors writer. Wyatt has been a freelance writer, with work appearing in Fodor's, Outdoors and LowFares.com.