Padre Pro’s last request was to be allowed to kneel and pray. When the firing squad’s shots failed to kill him, a soldier shot him at point-blank range. Pro had been falsely accused in the bombing attempt of former Mexican President Álvaro Obregón, and had become a wanted man. Betrayed to the authorities, he was sentenced to death without the benefit of any legal process. On the day of his execution, Pro forgave his executioners and refused a blindfold. He died proclaiming, Viva Cristo Rey! (Long live Christ the King!) On a recent trip to Mexico City, I was exploring the Roma Norte Neighborhood, courtesy of Visit Mexico City.  Located on the edge of the city’s bustling downtown and historical sites, my photographer, Deb Roskamp, and I were just about to take a break in one of Roma Norte’s idyllic tree-lined pocket parks, when a small building, adjacent to a parish church, caught our  attention.  Its sign read: Museo Padre Pro. The name sounded curiously familiar, so we went inside.

The museum was small, but felt spacious, allowing emotional space to reflect on this man Pro and his remarkable life story. At the entrance to the museum, books, posters and postcards were sold. All the information was in Spanish, but fortunately my photographer was Spanish-speaking wife, who translated Pro’s history to me. His story was of a  Catholic priest who defied the fiercely anti-clerical and anti-Catholic provisions of the 1917 Constitution, which were now vigorously enforced in 1926. This enforcement resulted in severe penalties for priests, including death, who criticized the government or wore clerical garb outside their churches. The articles also mandated secular education in schools, prohibiting the Church from participating in primary and secondary education, forbade public worship outside of church buildings and restricted religious organizations to own property. The final article revoked basic civil rights of clergy members, denying priests and religious workers the right to vote.

In 1926, the Jesuits sent Padre Pro to Mexico City just three days after Plutarco Elías Calles banned all public worship. Since he was not known as a priest, Pro went about clandestinely — sometimes in disguise of a variety of professions — celebrating Mass, distributing communion, baptizing children, hearing confessions, anointing the sick, and even celebrating weddings. He would often dress as a beggar to collect money for the poor. The whole time, he was risking his life because public worship was explicitly outlawed and priests would be arrested immediately. Details of Pro’s ministry in the Underground Church come from his many letters displayed in the museum. Soon under surveillance by the Calles regime, a failed attempt to assassinate Álvaro Obregón, provided the state with a pretext for arresting Pro.  A man confessed his part in the plot, testifying that Pro was not involved, but this was ignored.

In prison, unsure of his fate, Pro spent his time praying for the others in confinement and for the salvation of humankind. On the morning of November 23, a guard appeared at the cell door and called for Padre Pro. He turned to the other prisoners and exclaimed, Good-bye, brothers, till we meet in Heaven!

Montréal is a city of cathedrals, and for my first trip to the city my plan was to walk from one church to the next, never knowing what experience awaited me around each corner. While wandering on the edge of Old Montréal’s cobbledstoned streets, I stumbled upon Notre-Dame-de-Bonsecours Chapel, known as The Sailor’s Church due to its proximity to the Old Port. I was quite moved by the statue of a woman atop its dome, who seemed to reach out to the St. Lawrence River. Upon closer inspection I realized that the statue was Our Lady of the Harbour, made famous by Leonard Cohen in his song, Suzanne. As a fan of Cohen, it was an important discovery in which I will never forget. The church also features an observation tower with remarkable views of Old Montréal and the St. Lawrence, and a museum, which includes artifacts pre-dating the arrival of the New France colonists in 1642. Admission to the chapel is free.

The Dying Lion of Lucerne is a powerful memorial that pays homage to the selfless Swiss Guard who died defending the royal palace in Versailles during the French Revolution. When angry French masses stormed  the palace on August 10, 1792, the 1,000  Swiss Guardsmen stood up as the last defenders of the French monarchy — but in vain. (History has not been kind to Louis XVI, but we forget that he underwrote the Continental Army during the American Revolution). The Guard, renowned for their bravery and unconditional loyalty, never surrender, even at the point of death. A Swiss Guardsman had to be an unmarried Swiss Catholic male between 19 and 30 years of age who had completed basic training with the Swiss Armed Forces. The Dying Lion of Lucerne  monument was initiated by Karl Pfyffer von Altishofen, a junior lieutenant with the Swiss Guard, and was hewn out of stone after rallying Lucerne’s artistic community. It was described by Mark Twain as “The most mournful and moving piece of stone in the world.”

Today, the Swiss Guard’s esteemed stature remains as defenders of the Pope in the Vatican. Since the assassination attempt on John Paul II of 13 May 1981, a much stronger emphasis has been placed on the Guard’s non-ceremonial roles. The Swiss Guard has developed into a modern guard corps equipped with advanced small arms, and members in plain clothes now accompany the Pope on his travels abroad for his protection. I recall with frustration while standing in line at  Saint Peter’s Basilica in Vatican City where a group of American tourists were mocking a  Swiss Guard’s historic mode of dress. I tried to explain to them that they were among the world’s greatest defenders. I was met with further laughter: “In those little outfits!” I thought, yes; but far more appropriate than the American tourists’ baseball caps, sweat strewn tee shits with logos, and frayed baggy shorts.

The Magical Mystery Tour – The Beatles in Liverpool

The Magical Mystery Tour of Liverpool is the ultimate Beatle experience for the ultimate Beatle fanatic, and if you fit that description, it is well worth the journey. The tour introduces you to over thirty places directly associated with the Beatles and those people who were close to them.

Tickets are purchased at the  Beatles Story Museum at the renovated Albert Dock, on the River Mersey. If you have the time, the museum offers a good Beatles primer before you get on the bus. Full of memorabilia, rare photographs and interactive exhibits, it covers the lads’ beginnings to their rise to stardom and eventual departure from Liverpool.

Participants board one of the company’s fleet of three yellow psychedelic Magical Mystery Tour coaches identical to the bus used in the 1967 BBC film “Magical Mystery Tour.” A team of professional tour guides who are all expert Beatle historians conduct the two and a half-hour journey. And each of them seems to have their own personal story and relationship with John, Paul, George and Ringo. 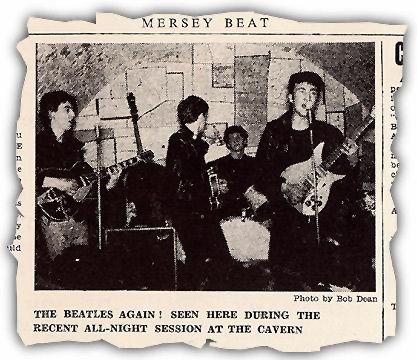 The Liverpool College of Art where John met Stuart Sutcliffe, later a temporary Beatle,  and Cynthia Powell, who became his first wife.

The childhood homes of John, Paul, George and Ringo.

St. Peter’s Church Hall, where Paul first met John while he was performing with his Quarry Men skiffle group.

And, of course, the reconstructed Cavern Club.

Yes, these are places that I will always remember.

The real story of ‘Yellow matter custard, Dripping from a dead dog’s eye’ in “I am the Walrus.” John Lennon heard that a Liverpudlian school teacher was teaching  courses about the meaning in Beatle songs. The lyric is a Liverpudlian school boy taunt. Lennon though the kids would get a kick out of it, so he put it into the song.