One of the most anticipated projects in recent Los Angeles history is finally complete. On July 2 the hotel portion of the new $1.2 billion Wilshire Grand Center mixed-use development opened for business, joining the project’s other components, which completed last month. 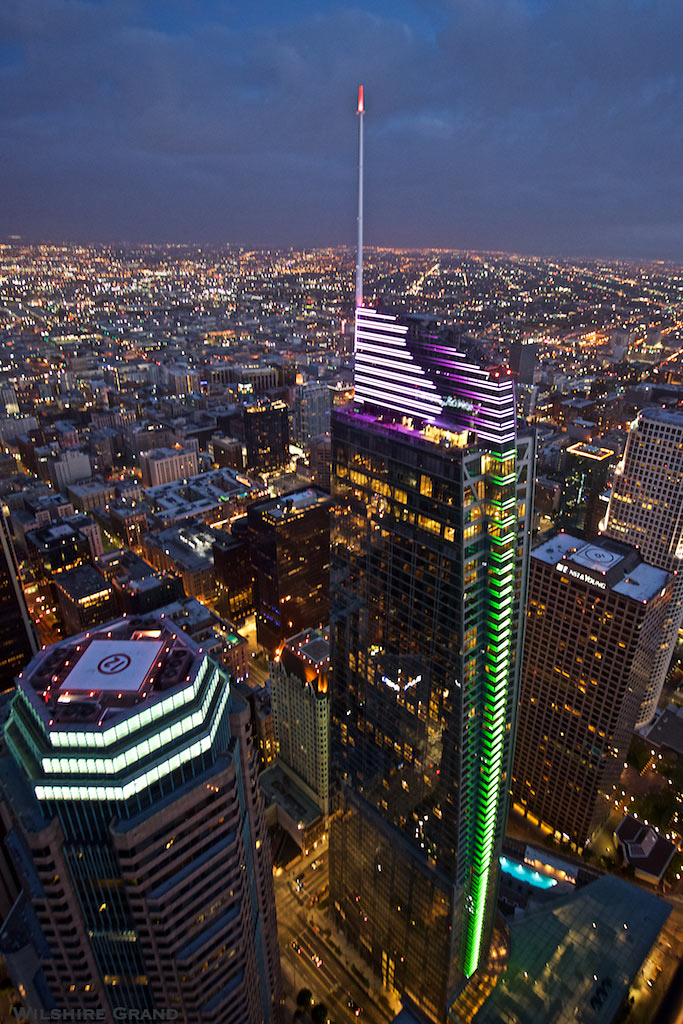 Located on the former site of the historic Wilshire Grand hotel, which closed in 2011, the new 73-story tower stands 1,100 ft-tall, making it the new tallest structure in Downtown LA and west of the Mississippi River. It is about 82 ft taller than its neighbor and former tallest building in LA, the US Bank Tower. This height difference comes mainly from an iconic steel spire that sits atop the Wilshire Grand and stands 294-ft, 9-inches.

“This is the culmination of a dream and the completion of a promise.  I have long dreamed of reinvesting in Los Angeles, my second home,” said Yang Ho Cho, chairman and CEO of Korean Air, the developer of the project. “We promised a world-class project and we delivered the crown jewel of Figueroa Street.”

Destined to become a top entertainment / hospitality destination for the city, the new development includes 400,000 sq-ft of office space and more than 45,000 sq ft of retail that sits below the 900-room InterContinental Los Angeles Downtown hotel. The new luxury hotel, which occupies floors 31 through 68, promises a “different experience that cannot be found in other hotels in the region.”

The lobby of the hotel is located on the 70th floor, allowing guests the unique experience of checking in while enjoying the skyline and spectacular views of downtown L.A.  The glass doors in the hotel’s ballrooms provide views onto the gardens and add a special touch that isn’t found in other hotels. In addition, guest rooms are equipped with retractable windows, so guests can enjoy the beautiful Los Angeles weather. 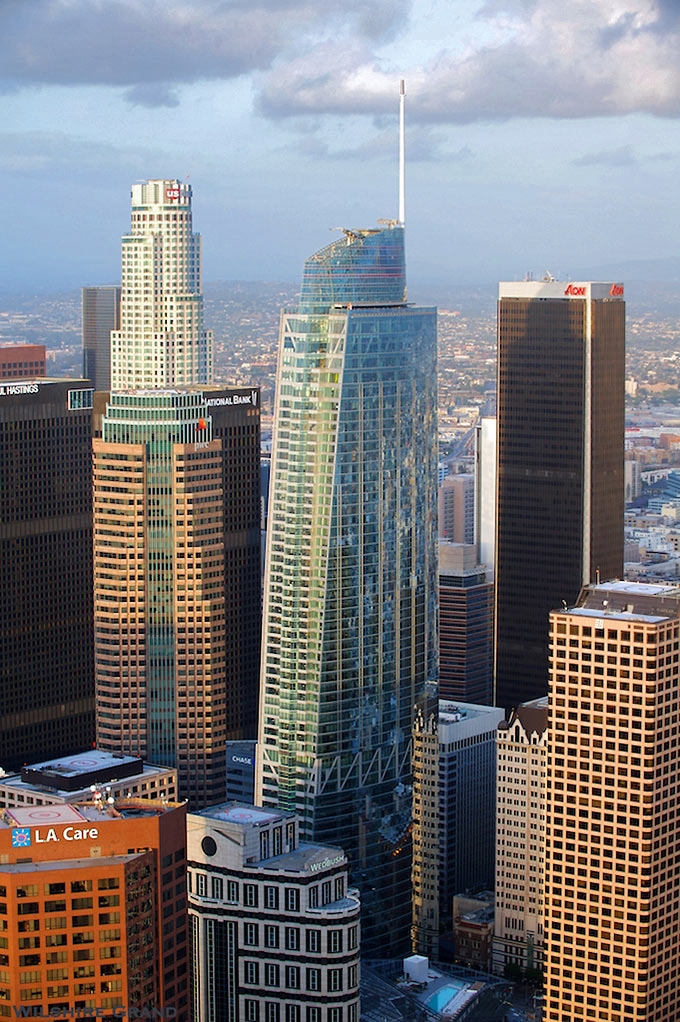 Vistas from hotel rooms and offices promise to be spectacular both day and night, with floor-to-ceiling glass, allowing the spaces to be filled with natural light. Project officials say this is the first significant building in Los Angeles to have this feature. From an external point of view, this plays well as the Wilshire Grand is literally surrounded by existing buildings that are composed of granite with inset windows. “This more glassy expression will portray the building as being “of our time,” a unique contrast to its neighbors,” say officials.

Other Wilshire Grand Center amenities include restaurants and bars, ballrooms, retail shops, and the 70th floor sky lobby. There is also below grade parking for 1,250 cars, along with stunning views from an observatory deck and a sky pool deck.

Another interesting tidbit about this project is that Architect Chris Martin’s grandfather was the designer on another iconic LA structure — the 1928 City Hall building on Spring Street. I spoke to Martin a while back about the new building’s distinctive spire and he told me that the project is a “big deal because my grandfather did L.A. City Hall in the 1920s, and that is the only other building in the city that really has an architectural top. All the buildings in L.A. have flat, truncated tops, so this is going to stand out — and we want it to.”

Martin, whose cousin David Martin is the lead designer on the new hotel, says the spire and the entire exterior skin of the tower will be filled with programmable LED lighting, which will be seen throughout the city, and used to “artistically to give character to the building in light.”

The project team showcased this LED light system at a grand opening celebration on June 23, as they illuminated the entire building and much of Downtown Los Angeles with a dazzling array of lights accompanied by music.

The Wilshire Grand Center is also very structurally sounds, as it is built with state-of-the-art construction methods. It is designed to withstand a magnitude 8 earthquake by using the Bucking Restrained Braces (BRB) method that is especially important in a region affected by Pacific Rim earthquakes.

The skyscraper, which has created an estimated 122,000 new jobs across the city, was developed by Korean Air Lines Co., and built by Turner Construction Company, with Brandow & Johnston serving as the Structural Engineer of Record. A.C. Martin was in charge of the design.

The Beach, a Lake and a Pool at The Leta Hotel in Goleta

For those who love the beaches and beauty of Santa Barbara, but want a slower paced, less …

Greg Aragon is a travel writer from Glendale, California. For the past 10 years Greg has authored “Greg’s Getaway,” a popular weekly travel column, featured in a number of weekly publications around Los Angeles County. In the course of writing the column, Greg has traveled to more than a 20 countries in search of exciting destinations, people, food, drink and culture.

From Alaska to Zermatt, Greg has experienced the thrill and beauty of traveling to the fullest. Along the way he has dog sledded on glaciers, drank with sea captains, danced with hula girls, dined with royalty, sung with street performers, wrestled with pigs, jumped from airplanes, conquered rapids, panned for gold, rode a rhino, slept in trees and much, much more. When not on the road, Greg enjoys strumming his old nylon string guitar and playing basketball.