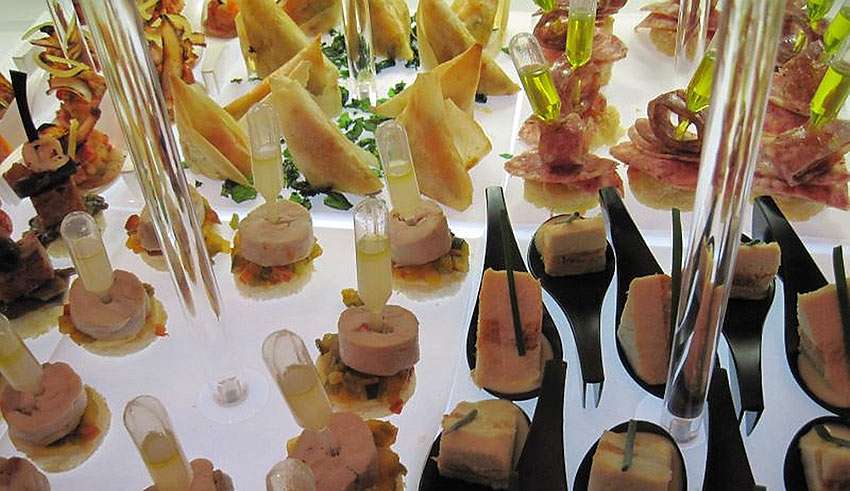 Many elaborate tapas on display

I first met Toño Pérez (of Atrio Restaurante in Cáceres, Spain) in Manhattan. I took a master class he taught last October at the Institute of Culinary Education (ICE). He handed out photos and descriptions of his signature tapas dishes and then created them for us. It was amazing!

Tapas was traditionally a slice of bread to cover the top of your drink and keep the flies out. Eventually something was put on it as an accompanying snack with your drink. Nowadays tapas can be anything, from a few olives on a toothpick to a slice of egg and potato tortilla, to even a slice of cheesecake.

Chef Toño’s creations leaned towards the more elaborate and imaginative. And while some didn’t look exactly like the photos, they were the same ingredients and taste profiles but on a smaller scale. Each showcased the purest ingredients of Chef Toño’s home in Extremadura, Spain, and even a bit of his sense of humor.

For instance, the first tapas looked like a cup of espresso, but it consisted of a jelled potato puree topped with crisp iberico bacon bits and a garlic/paprika sauce, with parmesan foam floated on top. A light sprinkling of powdered coffee delivered the aroma to completely fool the eyes and nose. The illusion was perfect. It was a savory cup of “espresso” to eat with a spoon!

A more classic tapas, meaning bite-size goodies on a piece of bread, appeared to be next on the menu, but – as in the espresso – looks can be deceiving. In this case the “bread” was a dehydrated, twice-cooked and pressed pork skin; all crunchy and delicious. On it were dotted a creamed local cheese and diced chorizo, garnished with stems of chervil and topped with a thin wafer of briefly baked phyllo pastry that had been brushed both sides with the same garlic/paprika sauce. Here’s a video of that tapas being made.

Paprika is one of many specialty products of Extremadura. Since Chef Toño used a garlic/paprika sauce in so many dishes, I want you to have the recipe. You should know ahead of time that this makes a lot of sauce; he was feeding 130 students. But there are so many uses for it and it keeps well, so don’t be shy about making a batch.

Simmer 1300 grams (about three pounds) of garlic in 2600 grams (about 3 quarts) of olive oil until golden. Reduce heat and add your herb or herbs of choice – for the above recipes it is 208 grams (about 7 ounces) of fresh rosemary – but in the next recipe it is 130 grams (about 4 ounces) of dried oregano and thyme combined.

Next, his recipe states “add paprika to taste”, but my recipe at home from a different Spanish chef, calls for no more than 110 grams (about 4 ounces) of paprikas – both hot and sweet – mixed to your taste. So you can see there is some flexibility here. Basically you’re making a paprika flavored olive oil, so you can imagine its uses. I sauté vegetables in it, use it as part of a meat marinade, and cook shrimp in it. My recipe was originally meant as a drizzle over octopus and potatoes, a typical Galician dish, so I called it Galician oil. You can see that recipe here.

Finally, stir all the ingredients just to combine and simmer together on low for one hour. Then cool to room temperature and allow to settle. My Galician chef added this wisdom: “most people ruin the sauce either by stirring it, or not letting it cool thoroughly.” Gently remove solids and strain, trying not to have any paprika in the final sauce – “it will make the oil bitter.”

The final tapas is also misleading in that it is called Pork Tartar with flowers and herbed mustard. This a standard tapas in that it really is made with a toasted slice of bread, but the pork is cured, not raw. Since it is not “cooked” technically it can be called tartar, but don’t worry – you’re not eating raw pork. It was finely minced with egg yolk, pickles and onions, just like a beef tartar. Then a little garlic/paprika sauce and mustard were added before it was put in a pastry bag and chilled. That, piped onto the toast, with a mustard and creamed cheese mix dotted on top of it – the whole covered with edible flowers and micro greens – made a stunning and delicious treat!

There. Thanks to Chef Toño Pérez and the fine ingredients of Extremadura, you have three tapas to make for World Tapas Day. You have plenty of flexibility in the recipes. Meaning, you can’t go wrong so long as you use the finest ingredients and the pictures of the finished tapas as a guide. Please contact me or leave a message below if you’d like the complete recipes. (And do make that garlic/paprika sauce – you’ll love it!)