I find myself in the center of a massive pit, surrounded by thousands of rigid warriors tall enough to look down on me. Posture perfect despite their years – twenty-two centuries – they stand in defiant battle formation. Overwhelmed, I back up to photograph a wiseacre standing behind a warrior who is missing his head. I accidentally bump against the warrior behind me. Down he goes. Then down go a hundred, like dominos. Thousands of warriors turn to face me, their expressions uniform in anger. Calvary horses paw the earth and tug at chariots. Crossbows lock and load. I leap from the pit and only quit running when I’m in Kazakhstan, refrains from Traffic’s “Forty Thousand Headmen” playing in my head. 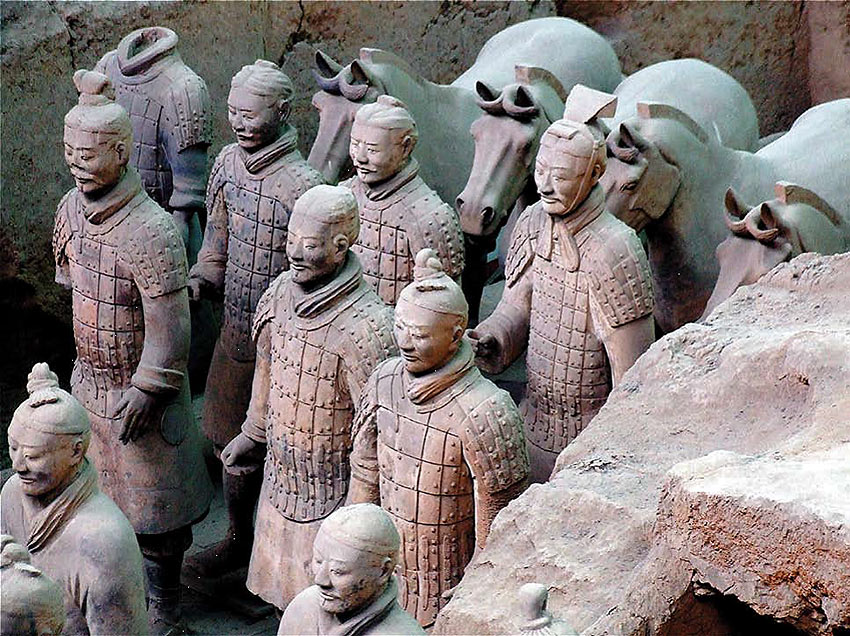 They may have feet of clay, but these mystery men still intimidate my dreams. Fierce terracotta warriors have transformed an impoverished Chinese countryside – some people still dwell in caves – into a tourist Mecca. Beijing may have the Olympics spotlight, but it is the ancient capital, Xi’an, in central China, one of the great ancient cities, where Chinese history really built its foundations. Peasant farmers digging a well discovered the first terracotta warriors in 1974. The more archaeologists dug, the more stunned they were. Here the world awakened anew to the former splendor and mystery of China. Now encased by a world class museum, the warriors are part of a vanguard supporting the prediction that by 2020, China will be the world’s number one tourist destination.

Hard to believe the museum, still a work in progress, began in 1976, the last year of Mao’s life. Some communist somewhere was thinking tourism. Perhaps Mao – China’s last emperor, loosely defined, and ruthless – felt some kinship to Qin. So how did eight thousand warriors with armor and weapons, with cavalry and horses, congregate here, six thousand in the largest pit, now shielded by a protective hanger structure large enough to house an aircraft factory?

One of the most ruthless of emperors, Qin, had his successes, including launching the endless project of the Great Wall. Qin created the first feudal and centralized empire in China, the Qin Dynasty (221 BC – 206 BC), by subjugating the various states. But it was a bloody business and many tried to assassinate Qin. He must have anticipated the need for an army to protect him in the afterlife from angry spirits lining up from the scholars he murdered, opposing armies he slaughtered, and his forced labor pool, many of the latter buried alive to maintain tomb secrets. Never mind the 3,000 barren wives and concubines – some revered, some tortured for pleasure – many entombed to keep Qin company. One could assume that he had earned his nightmares. And Qin began earning them young. Becoming king while still twelve, he started building his own tomb in a mausoleum complex spreading over two square kilometers, constructed by 720,000 workers and craftsmen who eventually labored nearly four decades at what was for most of them, the ultimate thankless task.

Embarking on such an endeavor instead of honoring Confucian customs of respecting his late father with a grand memorial brought him the disapproval of 460 Confucian scholars. And because Qin was not keen on critics, he executed them, burning many of them alive. About this time, critics began to see the brilliance in the young emperor’s plan. Qin’s as yet unopened tomb is said to have pearls in the ceiling for stars, and small rivers and lakes filled with mercury. 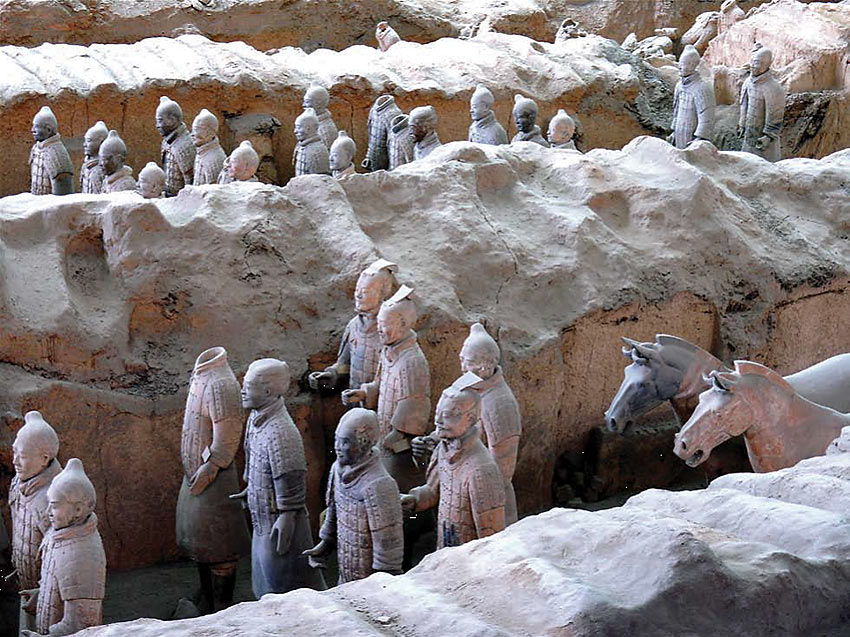 One distant dig, labeled pit “number five”, surrounded by an orchard, is filled with fragments of armor, like an upended Scrabble game. It is the tip of a huge pit, mostly unexcavated, and thought to contain only armor suits, perhaps tens of thousands of them. As thousands of chariot warriors, infantrymen, cavalrymen and horses were created – as well as dancers, musicians and acrobats – Qin’s theory was rather simple: the armor honors those fallen in battle and not properly buried, so the spirits of the dead and dismembered would be less likely to track him down for vengeance.

Today, the museum is visited by over two million people every year, nearly a quarter of them foreigners. Commerce related to the warriors already generates nearly a fifth of the province’s income, not counting what the surviving peasants who discovered them, local heroes, make autographing museum books. Warrior knockoffs of every size are available for sale everywhere, including gas stations and roadside attractions.

It’s an interesting contrast to the technical industries that have gained a presence not very far away – China’s first satellite and first integrated chip were created in Xi’an, and there are scores of state run laboratories digesting and applying technologies absorbed from around the world. The city itself has contrasts of modernity and the old walled city within it, all of which struggles against the dust and sand blowing in from the advancing Gobi desert. Indeed, the Xi’an sky is as much a signpost of global warming as the world’s defeated glaciers or blanched coral that more often catches the public eye. The sky can be a brilliant blue, but in the morning it can be hard to tell if the dim globe is the sun rising, or the moon. The warriors’ stoic gaze that seems to underpin China’s permanence is mitigated by China firing up a new dirty coal-burning power plant each week.

The sky has the feel of an empire reaching its limits, as empires inevitably do, just as the coal polluted air assaults the terracotta flesh. 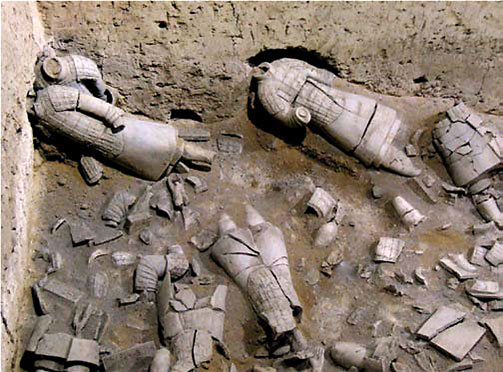 At the Shanxi Provincial Institute of Archaeological Research, fragments are assembled in restoration laboratories by German and Chinese scientists who exchange preservation expertise. Fragile artifacts, such as a bronze goose neck and head or sword, are X-rayed and studied to determine weaknesses and original designs. Some are tenderly and meticulously labored over within a sealed glass chamber, the scientists’ arms in long rubber gloves, as if herding renegade microbes. The warriors’ fragility is underscored by the nine or so different moulds that attack the terracotta, said to originate from shifting humidity and tourist breath. Despite the economic boom the warriors generated, funding remains a tough quest. The entire process of putting a single warrior back together can take up to a year.

The Qin Dynasty didn’t last long. Five years after Qin’s burial in 210 BC, a vengeful general Xiang Yu raided the tomb, stealing the real weapons the warriors held, and set a fire in the necropolis that burned for months. Many of the warriors are as shattered as egg shells. They now inspire craftsmanship of a different sort. Today, selected tour operators provide special access for travelers, who photograph themselves with the six and a half foot figures as if they were old chums. Up close and personal, visitors study faces that convey personality, faces that, millenniums ago, would have studied theirs.

It’s the faces that most linger in this writer’s mind, knowing that each, though a notch larger than life, represents a person who walked the earth, fighting in battles that seem otherworldly. We have often seen the idealized faces of emperors across different cultures. We seldom see the faces of Everyman. Their faces speak volumes about the warrior vanities of the day – the moustaches and goatees, the hair buns. Facial features reveal that many hailed from minority populations to the northwest, likely conscripted from conquered populations. The drama behind their searching faces is enhanced by pondering the armies of craftsmen who gave birth to the clay warriors, and the hardships endured. Perhaps it is respect for these toiling workers, not for the emperor, that the warriors most convey, as thousands of them patiently await their chance to shock and awe.