As I ambled through the verdant and sometimes wild, untamed off-road “savannahs ” of Sherwood Forest in Nottinghamshire, England, I was glad that Robin Hood was my trailblazing Sherpa. Robin, known outside of the forest as Ezekial Bone, is an actor/interpreter of history, an extraordinary storyteller, and font of information, much of which will supply me with fascinating cocktail-party persiflage for years to come. (How did Robin get his name, where does the expression “caught red-handed” come from, and so on.) During this stroll, his merry band consisted of me and a few other Sherwood Forest interlopers, there to learn from a man who calls these woodlands home. The area’s magical landmark – where supposedly Robin, Little John, and the benevolent highwaymen sleep – is the majestic Great Oak, perhaps 1,000 years old, with a girth of 33 feet, and a canopy of nearly 100 feet.

I was there sampling a slice of an excursion from UK Countryside Tours, a brand-new British sightseeing/exploring company, which espouses the mantra, “Telling the Stories of England.” This gambol in Sherwood Forest is part of several of its itineraries – Myths & Legends of Northern England; Discover Nottinghamshire; the Dukeries & the Pilgrim Fathers. Each is enlivened by attention-grabbing guest lecturers, extraordinarily knowledgeable academics, and local guides, all of whom know how to weave captivating information into their subject matter. Tours are peppered with many unusual, private, behind-the-scenes experiences that enrich and inform.

Headquartered in a World Heritage Site structure in Derbyshire, Countryside Tours is a specialist in innovative, culturally-based excursions for the intellectually curious, seeking a trip that is beyond the hum-drum. The company was founded by James Dixon, the former chief executive of the Peak District National Park for 11 years; it has the backing of the national tourism agencies, VisitEngland and VisitBritain, and is partly funded by VisitEngland’s Discover England Fund.

Dixon and his savvy team have striven to create intimate group tours that are compelling and content-rich; attention to detail, in-depth immersion in a single region or topic (gardens, maybe, or Darwin or women in English history), and rare access to places, people, and artifacts are all critical to the programs. Countryside Tours boasts that it has entree to countless major libraries (manuscripts and masterpieces), art galleries, historic battlefields, and national parks, as well as to more than a dozen top universities, nearly 50 country houses, 25 castles and monuments, dozens of magnificent gardens (some quite private), 12 cathedrals, and 45 museums – all of which, it hopes, will elevate the art of touring.

Dixon’s efforts have paid off: When we visited the famed Chatsworth House, one of ten of a group of extraordinary manses, known as the Treasure Homes of England, the current owner, the Duke of Devonshire, came to greet us and answer questions. Chatsworth, which has been passed down (since 1549) through 16 generations of the Cavendish family, is situated on the banks of the Derwent River and has a breathtaking 105-acre garden (with a maze and a “kitchen” garden) and a 1,000-acre park, designed in the 1760s by the celebrated Capability Brown. The day we visited, the lush grounds were awash with families and dogs. My main interest, however, was in viewing, before the hoards came (a perk for our group), a sumptuous exhibit, “House Style.”

This exhibit is on view through 22 October (and as luck would have it, the company has a short trip, “The Treasures of the Peak District” of four days/three nights that is scheduled just before the exhibit closes), and highlights never-before-seen items from the Devonshire Collection – clothing, artifacts, accessories from some of the interesting and colorful individuals who have sashayed though the Chatsworth front door over five centuries, including Bess of Hardwick and Georgina, Duchess of Devonshire, and more modern-day personages, including two of the famed Mitford sisters, Adele Astaire, Kick Kennedy (John F.’s sister), and the model Stella Tennant. Accompanying the exhibit is a stunning catalogue (Skira Rizzoli), edited by renowned international editor-at-large of American Vogue, Hamish Bowles.

Another very special visit was to Haddon Hall (also on the fall itinerary), among the finest examples of a fortified medieval manor house and described as “the most perfect house to survive from the middle ages,” dating from the 12th century to the early 17th century. We were greeted by Lady Edward Manners, the doyenne of the estate, and her dog, and as she showed us around and shared tidbits of her life and the history of the home, the very stones of the edifice seemed to crackle with life. Visitors will realize that they may have seen Haddon Hall already, if only on celluloid, in “The Princess Bride” (Prince Humperdinck’s castle), “Pride and Prejudice,” and “The Other Boleyn Girl,” among the many films that have used this astonishing building as a backdrop.

A visit to Cambridge highlights Darwin, with a behind-the-scenes glimpse into the great botanist/naturalist’s life and letters. With the narrative of a knowledgeable, specialist guide, Darwin’s life and his inquisitive mind, along with his long-dead, catalogued specimens, brim with life. A drive to Welbeck’s School of Artisan Food on the Welbeck Estate in North Nottinghamshire (housed in the estate’s former fire stables, dating back to 1870) highlights yet another exceptional visit, with a luncheon and walk through this singular culinary/educational facility, where students can study chocolate-, bread-, and cheese-making, butchery, charcuterie, and preserving.

All Saints’ Church in Babworth is also an outstanding destination, where the Pilgrim Fathers William Bradford and William Brewster lived and worshipped before setting off on their long journey to the New World. Scrooby Manor, home to the latter (and where secret prayer meetings were held), also reverberates with life, with the help of another costumed, well-educated interpreter, Sue Allen, Scrooby’s official historian. She handily chronicles the Pilgrim Fathers’ 1608 journey with ease and ebullience; their arduous trip to the Plymouth becomes a captivating adventure story in her retelling.

It is no wonder that the American author and humorist Bill Bryson called the British countryside “the loveliest, most fetching landscape the world has ever known,” as he traversed it north-south/east-west, before he left his adopted homeland after a 20-year residency. You will feel the same way after a sojourn or two with UK Countryside Tours. And that is the intention of the company, to make history – England’s stories – come alive, so that travel becomes an effortless education, whether you are an academically curious, eager learner or simply an “accidental” student on a trip.

The Details: UK Countryside Tours will ultimately stage 42 tours in three categories: Art and Culture; History and Heritage; and Gardens and Country Homes. Most tours are six nights/seven days, and range in price from US$3,000 to US$10,000; this year, however, the company is rolling out 17 shorter versions of its tours, each two, three, or four nights, and priced from US$732 to US$2,440 per person, exclusive of air fare.

Lodging and meals are included in the UK Countryside Tours programs and the company has put together a pleasing mix of modern, cozy, history-imbued, and/or elegant places for wining, dining, and slumbering, often off-the-beaten path. In Whittlesford Bridge, we lunched at the Red Lion, a modern-day coaching house with parts of the building dating from the 13th century. With wonky floors and low ceilings side by side with a 21st-century, glass atrium, the inn boasts both WiFi and weathered charm. Not to mention, deliciously prepared, locally-sourced cuisine. In Rowsley, Derbyshire, the Peacock (with three AA Rosettes) was the backdrop to a toothsome Sunday roast-style meal, with more tasty side dishes served family-style than any family could ever eat. The setting is modern, yet cozy, and the building, a former manor house, is a Grade II-listed structure.

Our repast at the Welbeck School of Artisan Food was a buffet, a hardy groaning board of fresh meats, cheeses, salads, and sweets. We had three wonderful meals at our hotels, as well – at the Midland in Manchester (where Rolls and Royce met…and the rest is history), at Ye Olde Bell in Nottinghamshire, and at the edgy and comfy Tamburlaine in Cambridge.

All were delicious and could not have been more different. The Tamburlaine, named for the Marlowe character, had just opened and the hotel staff were busy wiping off construction dust from horizontal surfaces, but that didn’t stop the chef from preparing a sumptuous feast. The hotel is striving to be not merely “in Cambridge,” but “of Cambridge,” and it seems it will succeed. The British all-day Brasserie serves traditional fare with a flair-like champ mash (mashed potatoes with spring onions, butter, milk, and maybe even cheese.)

At Ye Olde Bell’s Restaurant Bar 1650 (after the year the establishment was founded), modern British cuisine is offered and the adjacent St. Leger Bistro-by-the-Bar (with two AA Rosettes), features traditional “fayre,” as the menu states, including Ye Olde Bell braised beef shin pie with herb mash, baby vegetables, and red wine jus, among the many savory platters. The Midland has a hopping, trendy bar/restaurant, Mr. Cooper’s House & Garden Restaurant & Bar, with several different kinds of seating areas – cozy, overstuffed leather banquettes in the round, high bar seats and tall tables, and more traditional communal dining tables, all reinforcing the “happening” vibe. The cocktails are worth more than a passing glance, and there are several that pay homage to the bee, including Hive Mind (zacapa 23, bee bread, honey Kombucha); the “bee” drinks are served in custom-made, astonishing glassware – in the shape of a (horizontal) bee, with metal flap wings that lift up, so you can sip. 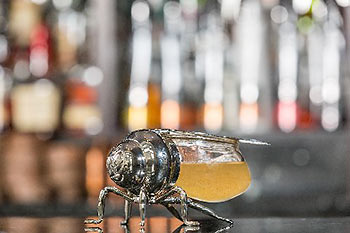 The food will captivate as handily as the bee glasses, and includes comestibles, such as caramelized cauliflower steak, with sautéed wild mushrooms and Parmesan mustard for a main with a typical side dish of creamed kale with roasted chestnuts and bacon. 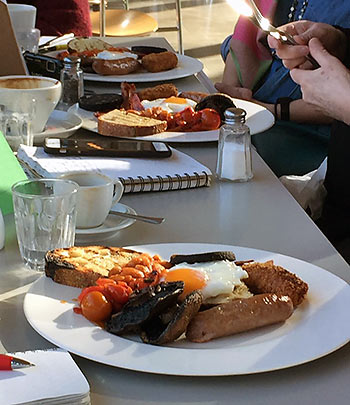 One other extravagant meal worth mentioning was, surprisingly, breakfast at the University of Manchester’s Whitworth Art Gallery, where the glass-walled restaurant, Café in the Trees, affords a bucolic vista over a leafy park. The menu features everything from the classic full English to a more exotic avocado on toast with tahini dressing and black sesame seeds. Portions were so plentiful, they dripped off the sides of the crockery.

Ruth J. Katz is a well-known luxury and lifestyle journalist based in New York City. For the past seven years, she was the style and travel editor at the upscale, NYC-based Promenade magazine.She has been a contributing editor to New York Home, Golf Connoisseur, The Modern Estate, Classic Home, and many other upmarket publications.

MORE
She began her career writing extensively for both The New York Times and New York magazine, where she covered service, shopping, consumer topics, and luxury. The author of five books, she was also the on-air home services expert, appearing weekly, on the Fox flagship television station in New York City, and she hosted a show on the USA and the Lifetime television networks. She has traveled to over 85 countries and looks forward to adding many new destinations to her list.

As soon as you cross one destination off your list, you add three more!