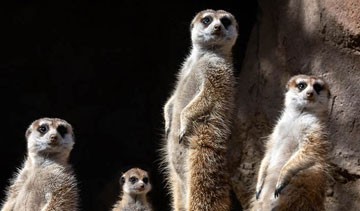 When I heard that the Los Angeles Zoo had finally reopened a few weeks ago, I knew it was time for a return visit to one of my favorite local attractions. I then made advanced online reservations, which are currently required for all guests, including members.

My getaway began when me and the family walked beneath the giant, iconic metal zoo sign at Griffith Park and entered the wild wonderland.

One of the first animals that caught our eye was the meerkats, located near the entrance. These playful, foot-tall squirrel-like creatures are members of the mongoose family and are found in arid and semi-arid regions of southern Africa. Their habitat at the zoo is made up of a complex systems of burrows with multiple levels and many entrances and exits. A mob of meerkats may construct several burrow systems scattered over many miles. These burrows are usually lined with grass and include a common latrine.

The meerkats are very outgoing and seem to enjoy posing for pictures as they stand on their hind legs on rocks or termite mounds—using their tails for stability—and scan the horizon for predators such as hawks, eagles, or jackals.

After the meerkats we hurried to see the Masai giraffes, which can stand 18 feet tall, making them the lookout towers of the savannah. Their six-foot-long necks enable them to eat leaves, flowers, and twigs that most animals cannot reach. Like humans, giraffes have seven neck vertebrae, although each neck bone may be over 10 inches long. The animal’s prehensile tongues measure about 18 inches long and are covered with bumps that protect it from thorns.

While studying these magnificent creatures I learned that female giraffes give birth to babies while standing up and the newborns can weight 150 pounds and stand up 30 minutes after entering the world.

Our next exhibit was Chimpanzees of Mahale Mountains exhibit. Lauded by primatologist Jane Goodall as one of the finest zoo habitats, this one-acre environment is home to a large troop of chimpanzees. When we got there, the animals were lounging on rocks, grooming themselves and climbing around.

The enclosure is designed to resemble the native environment of Tanzania’s Mahale Mountains in Africa and features mountainous rock formations, waterfalls and streams, palm trees and soft green grass. The facility also features a chimpanzee penthouse with heated bedrooms for the apes and an outdoor playground that has a jungle gym.

From the chimpanzees, we stopped at Campo Gorilla Reserve. Home to western lowland gorillas, the enclosure is highlighted by a forested pathway that visitors walk along to see the animals living among waterfalls and lush plants. Gorillas are the largest, most powerful of the great apes, a primate group that also includes chimpanzees, bonobos, and orangutans. They share about 98 percent of their DNA with humans.

The zoo’s gorilla enclosure has two separate troops of gorillas, a family and a bachelor group. The troops are led by a big silverback, who was eating a head of romaine lettuce when we got there. Glassed viewing areas and planted moats are all that separates Zoo guests from the largest primate in the world.

After hanging out with the primates, we walked to see the Grevy’s Zebras, the largest and most threatened of the three zebra species. The animals are wild relatives of donkeys and horses. They inhabit semi-arid and open scrub grasslands in Africa. The colorful creatures were running around in circles and eating grass when we stopped by.

From the zebras we headed to see Elephants of Asia, a sprawling, 6.56-acre exhibit boasting more than three acres of outdoor space, deep bathing pools, a waterfall, sandy hills, clever enrichment opportunities, and a high-tech barn capable of caring for elephants of all sizes and ages. The exhibit is so large, there are four different viewing areas to get a good look at the giant pachyderms.

Other cool things to see at the zoo include alligators and crocodiles, hippos, a giant condor, tower giraffes, and Flamingo Mingle.

The 133-acre Los Angeles Zoo and Botanical Gardens is home to more than 1,400 mammals, birds, amphibians, and reptiles representing more than 270 different species, of which more than 58 are endangered. In addition, the Zoo’s botanical collection comprises several planted gardens and more than 800 different plant species with approximately 7,000 individual plants.

The LA Zoo is located in Griffith Park, at the intersection of the 5 and 134 freeways. The address is 5333 Zoo Drive, Los Angeles, CA. 90027. Reservations are required to visit. For more information and tickets, visit:  www.lazoo.org

Some destinations have a way of putting you in vacation mode the second you arrive. San Di…