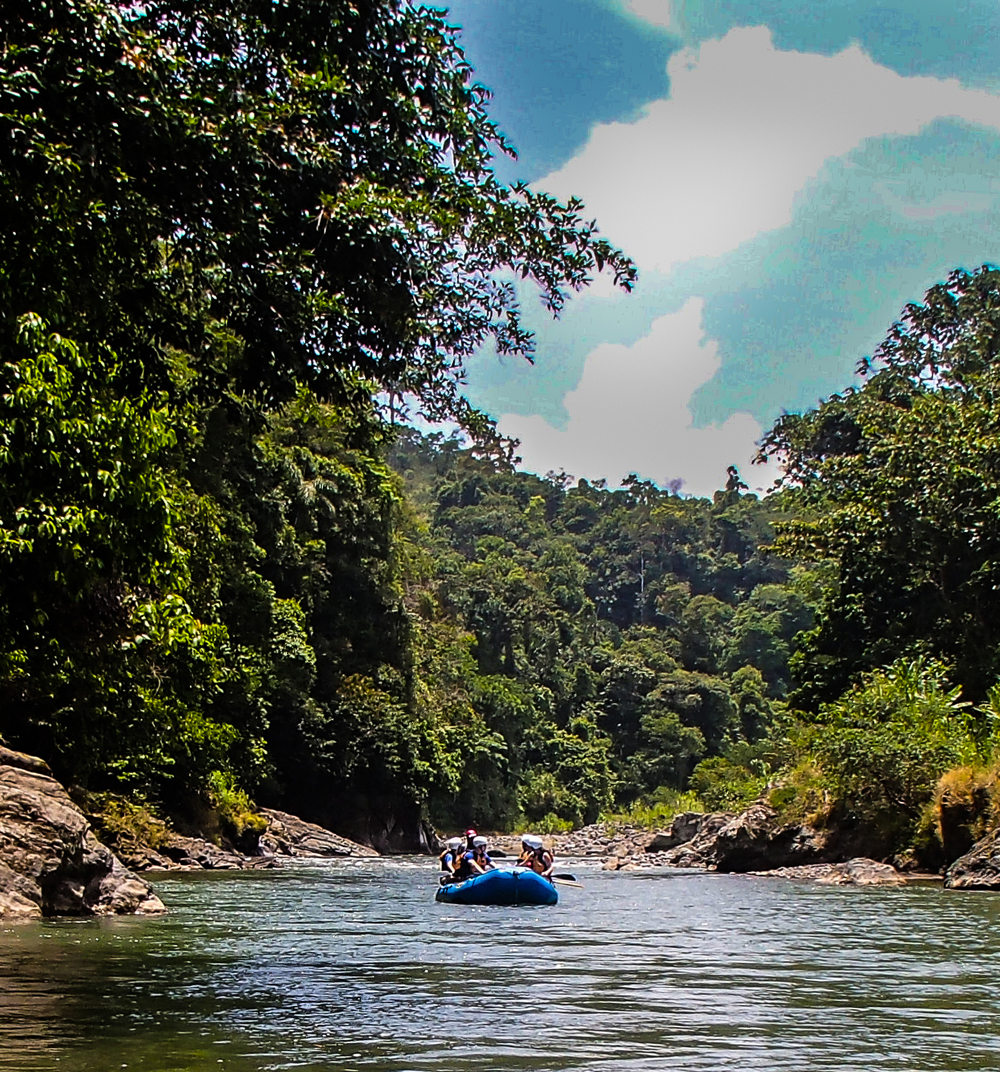 Oars up for these rafters on a quiet stretch of the Pacuare River, a classic pool-and-drop stream.

TURRIALBA, Costa Rica – It was 6:01 a.m. when we heard them barking, insistent “huh-huh-huh-huhs” rising above the rain forest canopy. After a pause they began again, rough grunts floating through our mountain eyrie, high above the Pacuare River.

“Howler monkeys,” mumbled Steve, squinting at his watch. Then a toucan squawked, a raspy screech from the trees near the corner of our deck, 500 feet up the hill at Pacuare Lodge, in eastern Costa Rica’s Barbilla National Park. Jumping out of bed, we grabbed the binoculars and a camera and dashed outside, to be greeted by the dawn and a faint chorus of chirps and whistles. 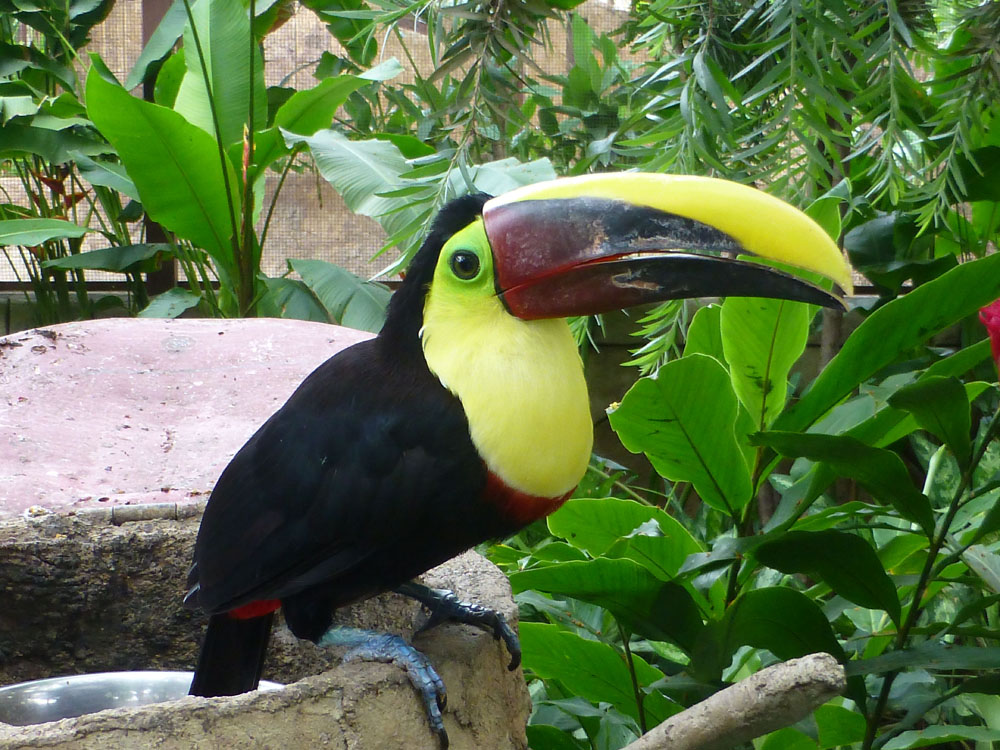 Keel-billed toucans, bright-colored and slow-flying, are easy to spot in dense rain forests like those in the Pacuare River gorge.

“Shhhh! Listen,” said Steve, who’d been thinking about jaguars since the evening the office manager showed us a video of a big cat prowling through the underbrush, photos captured in night-time trail-shots taken up the hill. He peered over the railing and under the deck. “Was that a growl?” Wildlife thrives in Costa Rica, in forests, backyard gardens and especially near eco-lodges, most of which are in remote parks, along rivers and in coastal jungles. From birds to monkeys, each day brings another surprise. Keep your eyes peeled when you’re out for a walk and you may be rewarded. 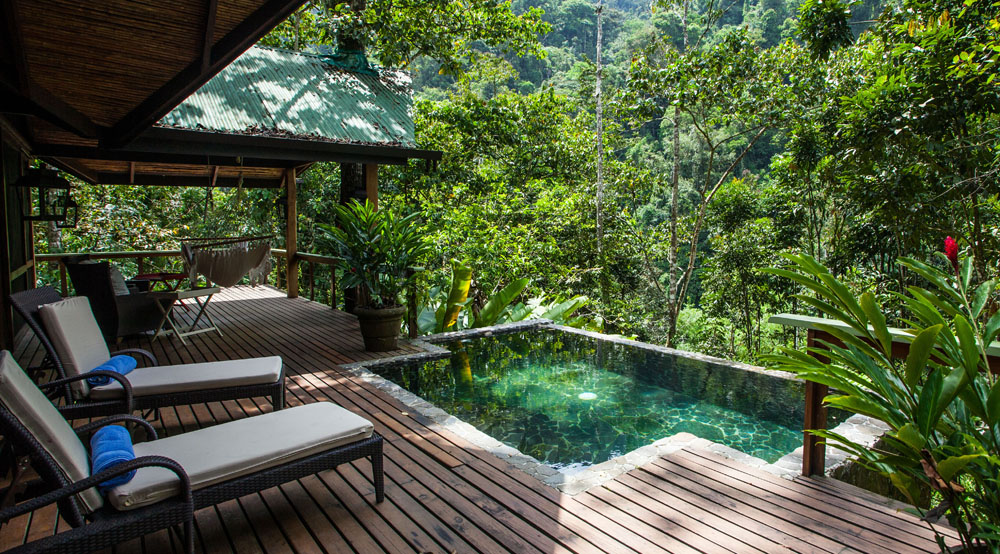 Each Linda Vista Suite, on stilts above the Pacuare River, has a private deck, hammocks, lounge chairs and a plunge pool.

Capuchin monkeys, sloths, coatis and birds appeared when the morning was fresh and light spread over the horizon. Butterflies, bacillus lizards (so-called “Jesus lizards” because they “walk” on water) and howler monkeys seemed to prefer full sun. By late afternoon, green frogs, tapirs, armadillos and tarantulas were active. But it wasn’t until the dark hours – after we were in bed – that Costa Rica’s six big cats – leopards, pumas, ocelots, oncillas, jaguarundis and margays – went on the climbed down from the trees for a silent prowl, crossing in front of the camera in search of prey or a mate. 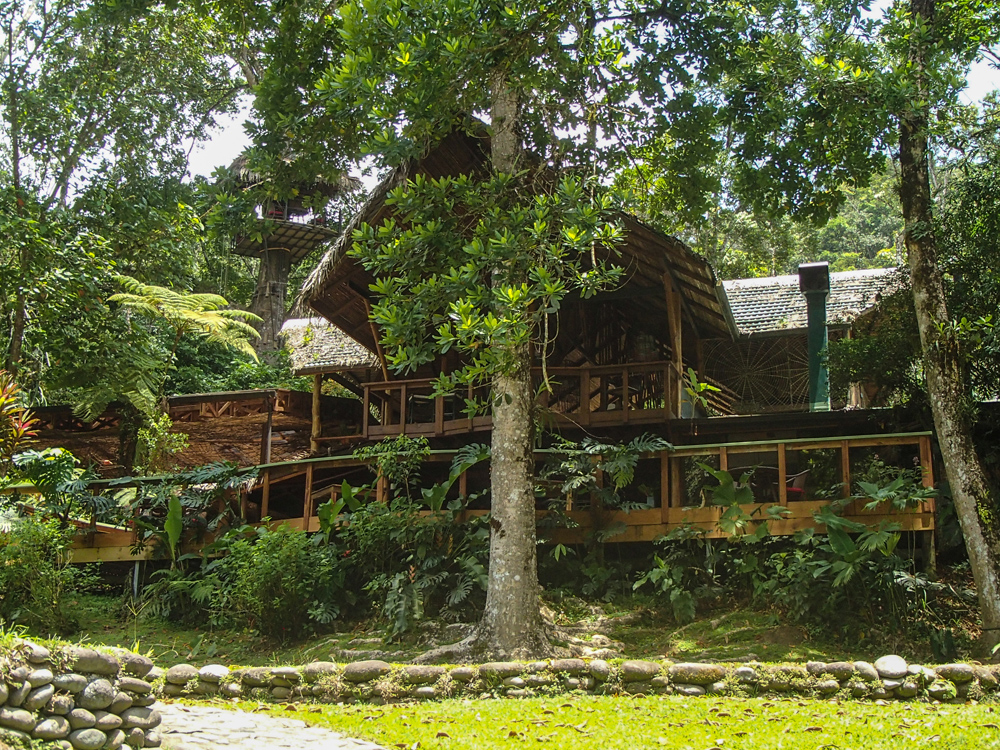 Pacuare Lodge, a National Geographic-designated Unique Lodge of the World, built of local wood among rain forest trees on the Pacuare River, includes a central hall, lively bar and an indoor-outdoor dining area, with over 18 guest cottages, from thatched bungalows to luxurious suites.

“Jaguars? Maybe, but don’t count on it,” said our travel planner Alison Carson, a Latin America expert, when she called to talk about our proposed two-week trip to Costa Rica. We’d been there before on a cruise, but the short time we spent on shore sowed the seeds for a real adventure.

We’ve always planned our own trips. But when a friend recommended Carson we decided to see what she’d suggest. After years of experience booking trips for friends, couples and families, she specializes in creating customized, personalized itineraries. And as we explained, we didn’t want to sit in a hotel or on a bus. We wanted to be outdoors. “The possibilities are endless,” she said. “But in case you wondered, we’re not booking trips to the rest of Central America, at least not yet.” Why, I asked. “Just Costa Rica,” she answered. “Because it’s the region’s only safe country.” Was it? I asked myself. Wars, poverty, and drug cartels have plagued Central America for decades. How could Costa Rica avoid entanglement in their neighbors’ problems? 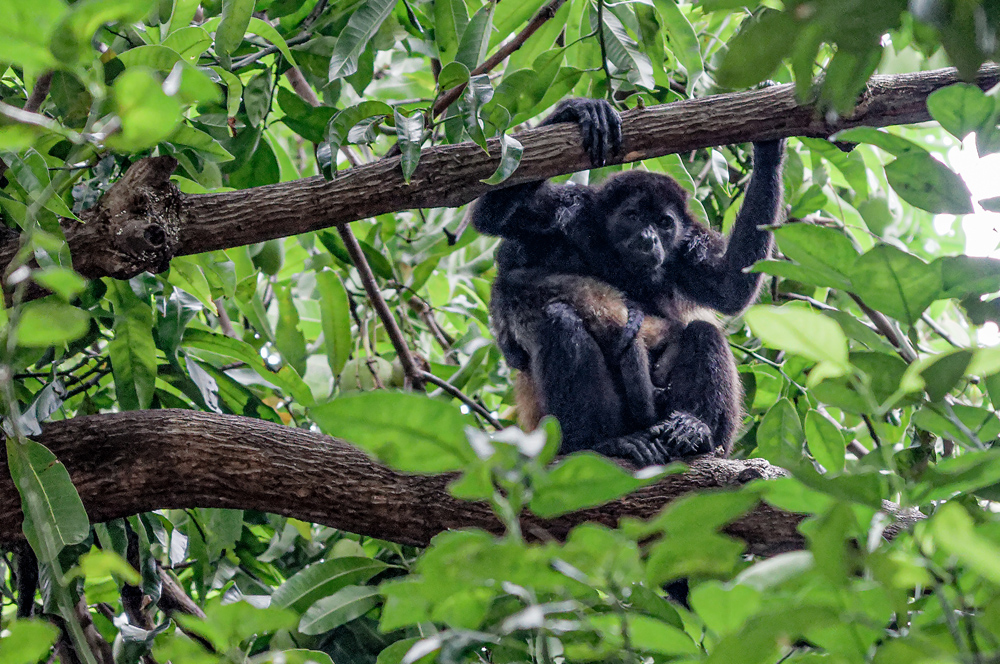 Howler monkeys, kings of the rain forest canopy, are hard to see but easy to identify; listen for their loud throaty howls. Though nine species have been identified, Costa Rica is home to just one, the common mantled howler.

Unlike its Central American neighbors, Costa Rica reaches across the region from the Atlantic Ocean to the Pacific Ocean. The Atlantic climate, rainier and more humid, supports forests, thick jungles and an endless variety of bushes, vines and flowers. In contrast, the Pacific climate, determined by a different set of wind and currents, is drier and sunnier. We’d already planned to visit friends who’d rented a house overlooking the Pacific Ocean. So Carson suggested starting with Pacuare Lodge in the east, continuing to Nayara Springs Resort, near Avenal Volcano in the center, and from there we’d go on to join our friends. 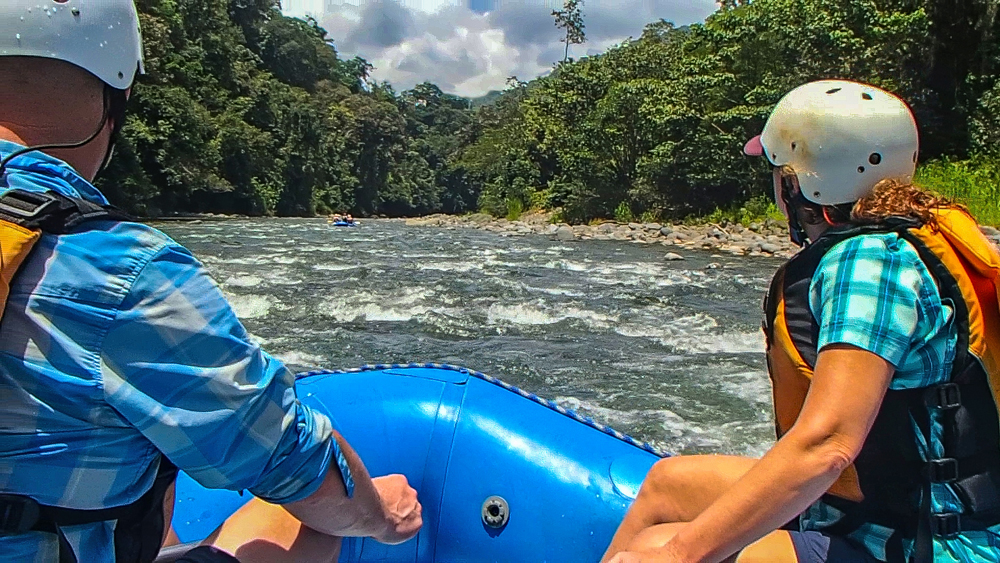 “Pacuare Lodge is pretty special,” said Carson. “It’s off the grid, on the Pacuare River, in the middle of the forest, best reached from the river. It’s world famous for class-five white-water, but those rapids are farther east, past the lodge. The part you’ll be on is easy and short, about four miles. Guests take the rafting company’s bus to the river and rafdown from there.” 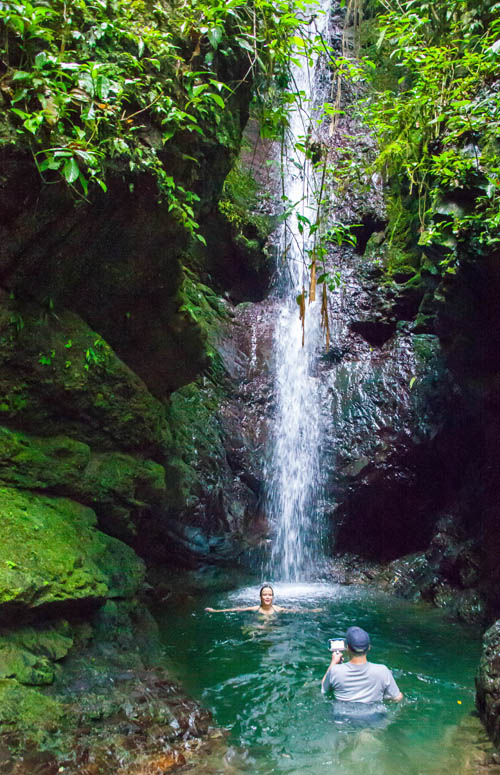 An overnight at the historic Finca Rosa Blanca, a 20-minute drive from San Jose International Airport, is a brief journey back in time to Costa Rica’s Spanish colonial era.

Two weeks later our itinerary arrived, with car transfers, drivers’ names, contact information, guides and hotel confirmations. Three weeks later we were on our way to the Pacuare River Lodge, with reservations to follow for Nayara Springs Resort, near the country’s signature volcano, Avenal. Since Avenal continues to puff and steam, you can’t climb closer than the observation deck, up the trail. So we hiked up to the top of another volcano, this one extinct.

With a dozen hot springs, some free and others built into commercial spas, swimming pools, gardens, restaurants, miles of walks and the town nearby, a town and nearby, it promised a change of pace. Ready to go, bags packed and flights and plans in order, all I needed to know was whether Costa Rica really was that safe. 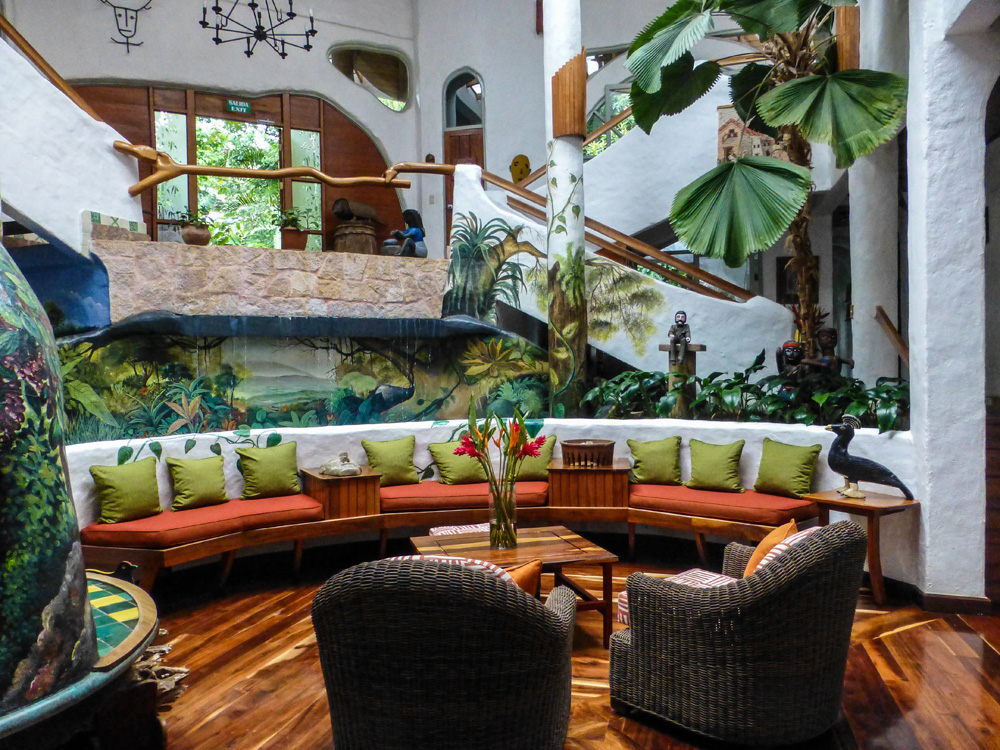 “Is it true what they say,” I asked Abel, the driver who picked us up at Juan Santamaria International Airport, in San Jose, the capital city. “Is Costa Rica Central America’s safest country?” “We think so,” he said, catching my eyes in the rear view mirror. “And why?” he said, heading for the Finca Rosa Blanca hotel, north of the city. “Because we have no military,” he said. “The money (taxes) pays instead for schools, high school and college, and for health care and doctors. And it’s all free,” he said. “Of course, there are always people who don’t want to work and are tempted to steal,” he said. “But most people here have jobs,” he added as we reached the hotel, a restored, 14-suite Spanish Colonial house and coffee plantation, with a pool and a popular open-air restaurant. 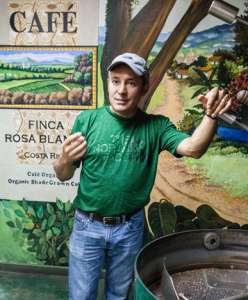 Arriving in time to join the hotel’s coffee plantation tour, we expected a sales pitch. But the two-hour uphill walk with Naturalist Manolo Munoz was as much about sustainable farming and water conservation as it was about a good cup of joe. Stepping off the trail and among the coffee trees, each planted in volcanic soil between banana and poro trees in a “mixed-species forest,” Munoz explained that these “trees add important minerals to the soil. A mix of sun and shade grows better “cherries” (coffee beans) than commercial farms planting on big flat fields,” he said. That evening, as the sun slipped between the palm fronds, Miguel, one of the hotel waiters, came around with menus. As he paused, I decided to see what he’d say about safety. “Um, Miguel, why do people say Costa Rica is Central America’s safest country?” “Because we don’t have an army,” he said. “After the civil war, in 1949, the government decided that paying for education, hospitals, culture and parks was more important than guns and soldiers.” 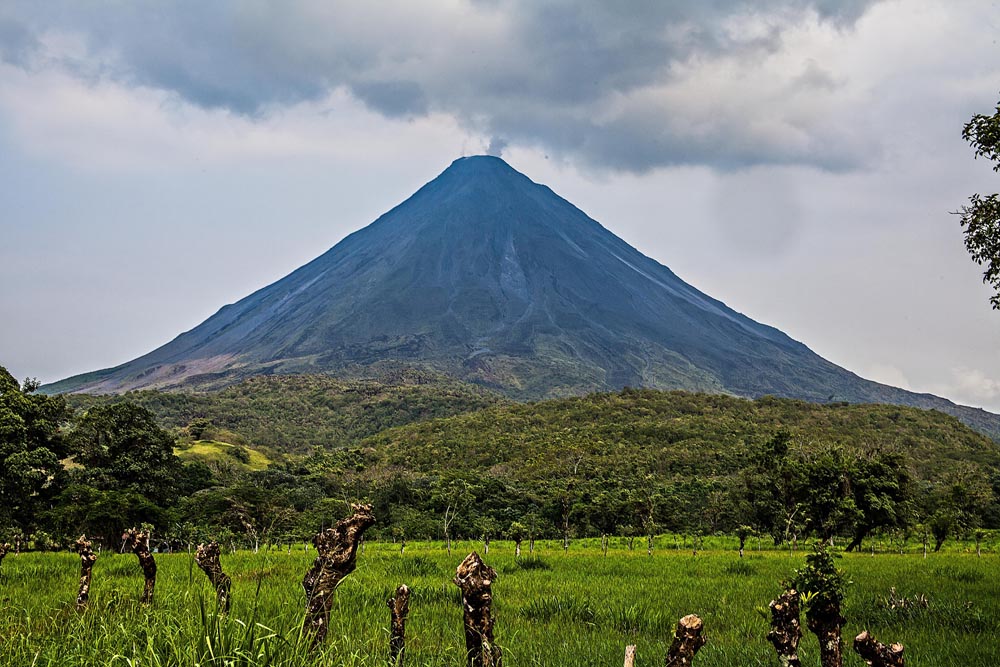 Local police manage local crime and a national government-supported 70-man team of “commandos,” a so-called trained “security and intervention” group, is available for emergencies, he explained. But beyond that, no army. And from then on, whomever we met, the conversation eventually turned to the importance of an education for youth, health care, and the importance of environmental awareness, all of it taught in grade school.

Howler monkeys barking overhead led to a conversation about species adaptation to the country’s 12 climate zones, ranging from sea level to the summit of the 12,533-foot volcano Cerro Chirripo. Rafting through the Pacuare River’s narrow gorge, the guide pointed out the differences between the trees along the river gorge and those on the mountain side above. Even at Nayara Springs Resort, a popular tourist destination with winding trails among gardens and trees, our dinner-time waitress paused to coo over a pair of young sloths napping in the trees nearby. 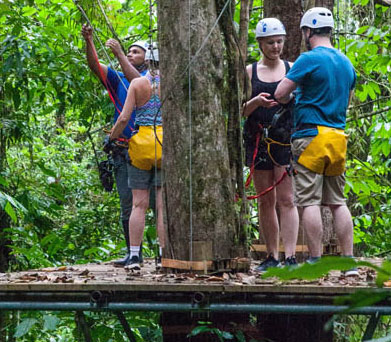 Located beyond city power and water, Pacuare Lodge employees were doubly aware of the environment limits. Electricity, limited to the early evening hours, was carefully managed. At night, candles lit both floors of the lodge – the bar upstairs and the dining room and river-side deck downstairs, where all of our meals were served. Our bungalow had a single light bulb available during bedtime hours. The bungalow had a solid wall against the hillside, with stilts anchoring the floor and front deck to the hill. The front and side walls were nothing but screens, admitting light – and bird calls – and keeping mosquitos out. The lodge itself and its oldest bungalows, recently remodeled, were built at the bottom of the hill, near the river. 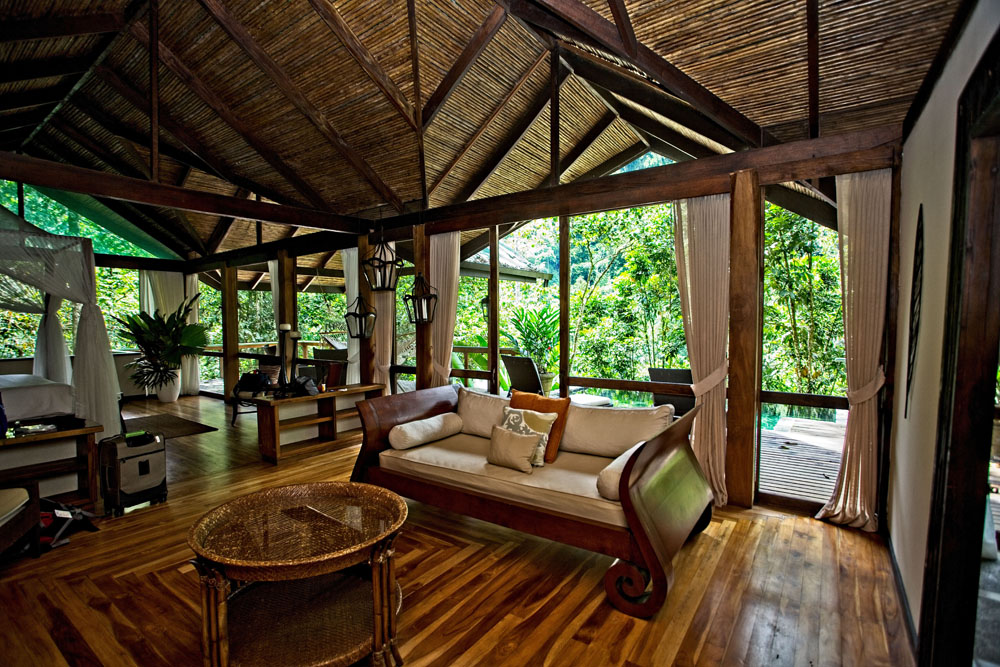 The luxurious Linda Vista Suites, high up in the rain forest canopy and with screened walls on three sides feels like being outdoors.

It was a startling contrast indeed, to Nayara Springs Resort, in central Costa Rice. Approaching on a paved road near Avenal Volcano and greeted by a uniformed bell boy, we thought we’d made a wrong turn. But this popular vacation retreat only masquerades as a sophisticated hotel. Despite a few sumptuous suites – elegantly costumed and with private plunge-pools – all the rest, the swimming pools, shaded patios, bars, pubs, a spa and gym, restaurants, shops and a cafeteria were tucked away between lush greenery on a maze of serpentine paths. A five-minute walk beneath the trees – alive with resident birds and 30-odd sloths – was a stroll in the woods. And for a real stroll, guided walks toured the property and headed up toward Avenal Volcano and a dozen hot springs. Three nights was probably enough, though I could have stayed longer. 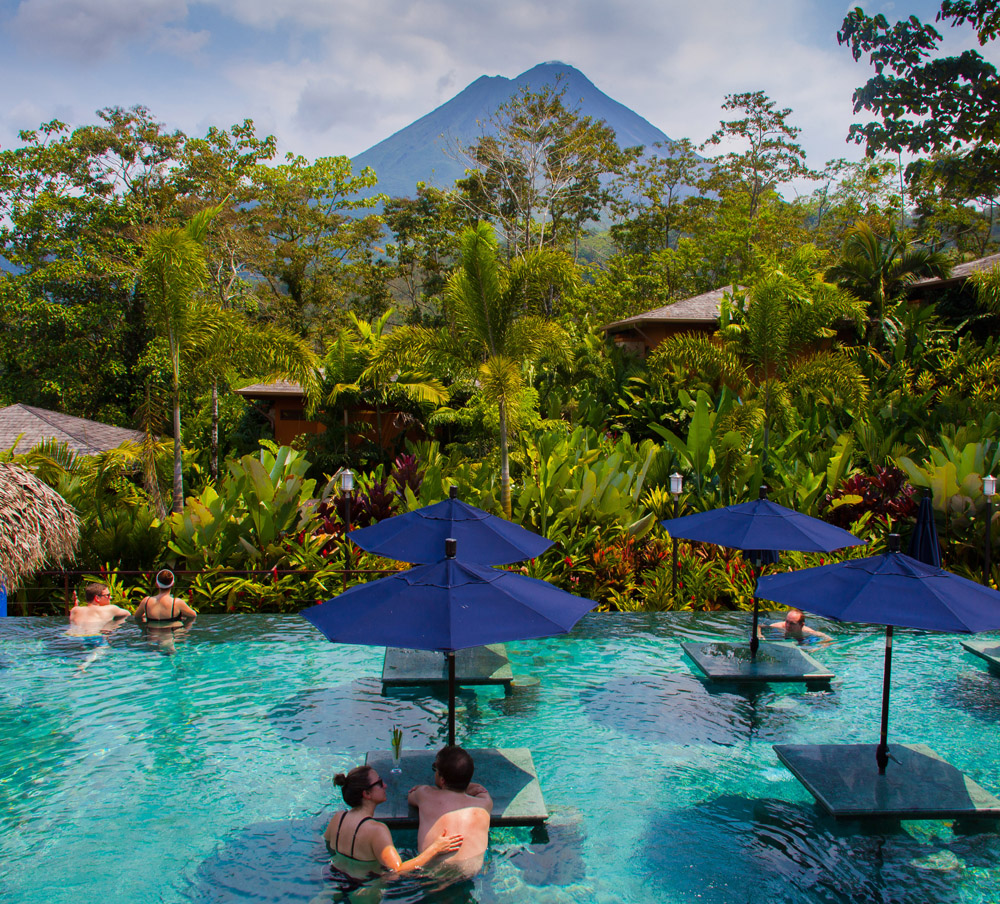 Heading west to the Pacific coast, we met our friends at Villa Manzu, a privately-owned two-story manor flanked by grassy lawns and trees, pools and patios. Intended for parties and anniversaries, it slept 24 guests and had a staff of 12 including a butler and three chefs. Located on five shady acres at the end of the road, it guaranteed privacy to deep pockets: Celebrities, tech-company CEOs, movie moguls and sports greats. We were lucky to have generous friends among them. Everything was included, from meals to fishing gear, and most important, Costa Rican hospitality.

THE LODGES (look for low-season discounts):
Finca Rosa Blanca – www.fincarosablanca.com/en: Double rooms start at $254 per night;
Pacuare Lodge: all-inclusive rates for three nights, for two in a bungalow start at $766;

GOING THERE: Fly into Juan Santamaria International Airport, in San Jose, the capital. For Villa Manzu, in Guanacaste Province, fly into Liberia Airport; the chauffeur does pickups.

My bio: Anne Z. Cooke writes about travel and its effect on global warming. Contact her at travelswithanne@cs.com; or Twitter at @anneontheroad.

When the Cook Islands Grew: Coming of Age in the 21st Century

It was a quiet afternoon on Raratonga, in the Cook Islands, when Lydia Nga heard the news.…