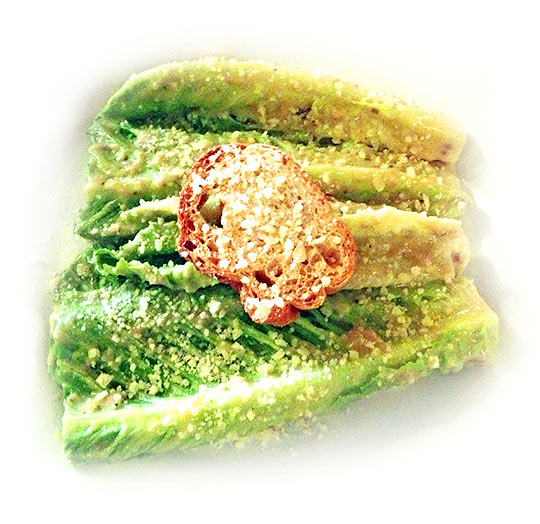 The correct and only way to eat a Caesar Salad is with your fingers.

Many people attribute its birthplace to the nation of Italy, a few others to Las Vegas’ Caesars Palace. Most dispute this, and credit the Caesar Salad’s creation to restaurateur Caesar Cardini, an Italian immigrant who operated restaurants in both the U.S. and Mexico. Cardini lived in San Diego, but also worked in Tijuana where he could avoid the restrictions of Prohibition. His daughter, Rosa, recounted that her father invented the dish in 1924 on the Fourth of July after a rush of thirsty and hungry American tourists depleted the kitchen’s stock in the wee hours of the morning. Cardini made do with what he had left in the restaurant’s refrigerator, adding the theatrical flair of the table-side tossing by the waiter.

Julia Child wrote that she had eaten a Caesar Salad at Cardini’s restaurant when she was a child of nine-years-old in the 1920s – thus making the creation world-famous.

“I am probably one of the few people around who saw the real Caesar Cardini making his salad. I was about 9 when my parents took me to his restaurant in Tijuana, just the other side of the border from San Diego. They were so excited when big jolly Caesar himself came to the table to make the salad, which had already been written up and talked about everywhere. And it was dramatic: I remember most clearly the eggs going in, and how he tossed the leaves so that it looked like a wave turning over.” 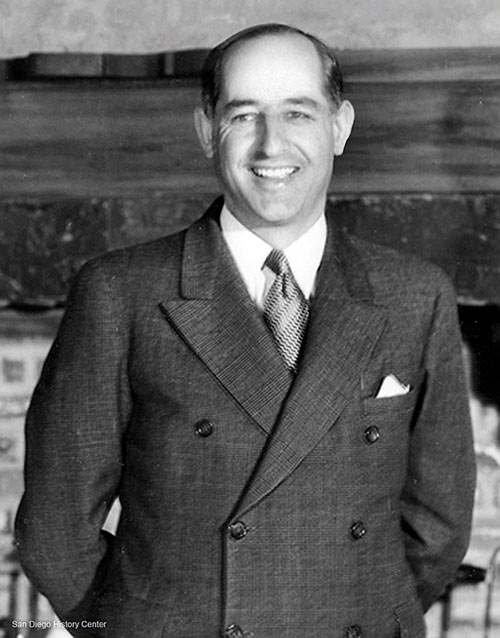 In her classic, “The Way to Cook,” Julia Child remembers: “According to Chef Caesar Cardini’s daughter, with whom I talked at length before doing this recipe for our TV show some years ago, the original contained no anchovies. However, you may certainly add them if you wish, mashing them into a puree with a bit of olive oil and tossing them in before adding the cheese. When Caesar Cardini first served his famous salad in the early 1920s, he used just the hearts of the romaine lettuce, the tender short leaves in the center, and he presented them whole. The salad was tossed and dressed, then arranged on each plate so that you could pick up a leaf by its short end and chew it down bit by bit, then pick up another. How-ever, many customers didn’t like to get their fingers covered with egg-and-cheese-and-garlic dressing, and he changed to the conventional torn leaf. Too bad, since the salad lost much of its individuality and drama. You can certainly serve it the original way at home – just provide your guests with plenty of big paper napkins. And plan to be extravagant.”

This version is quite close to the original, and you can see it is really a very simple salad. Use small, tender whole leaves, real Parmigiano-Reggiano – none of the fake stuff – and the 1-minute egg for creaminess (though you can substitute 1 teaspoon of mayonnaise for the egg). But you don’t want herbs and anchovies and things like that – then you have adulterated it.

You will probably need 2 large heads of romaine for 3 people – or use a commercially prepared package of “romaine hearts,” if they appear fresh and fine. From a large head remove the outside leaves until you get down to the cone where the leaves are 4 to 7 inches in length – you’ll want 6 to 8 of these leaves per serving. Separate the leaves and wash them carefully to keep them whole, roll them loosely in clean towels, and keep refrigerated until serving time. (Save the remains for other salads – fortunately, romaine keeps reasonably well under refrigeration.) To flavor the croutons, crush the garlic clove with the flat of a chef’s knife, sprinkle on 1/4 teaspoon of salt, and mince well. Pour about a tablespoon of olive oil on the garlic and mash again with the knife, rubbing and pressing to make a soft purée. Scrape the purée into the frying pan, add another tablespoon of oil, and warm over low-medium heat. Add the croutons and toss for a minute or two to infuse them with the garlic oil, then remove from the heat. (For a milder garlic flavor, you can strain the purée though a small sieve into a pan before adding the extra croutons. Discard the bits of garlic.) To coddle the egg, bring a small saucepan of water to a simmer. Pierce the large end of the egg with a pushpin to prevent cracking, then simmer for exactly 1 minute. 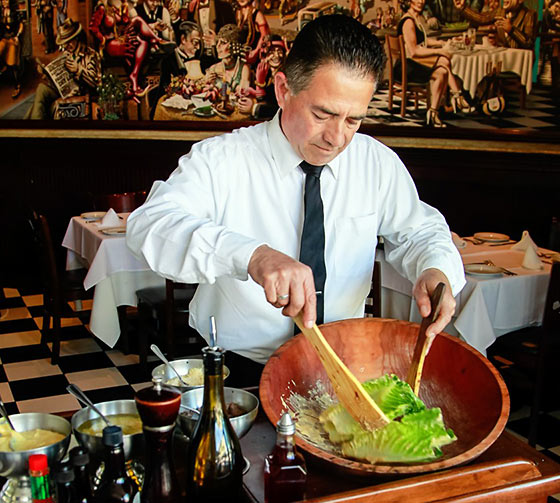 Mixing and serving the Caesar:

Dress the salad just before serving. Have ready all the dressing ingredients and a salad fork and spoon for tossing. Drizzle 2 tablespoons of olive oil over the romaine leaves and toss to coat, lifting the leaves from the bottom and turning them towards you, so they tumble over like a wave. Sprinkle them with a generous pinch of salt and several grinds of pepper, toss once or twice, then add the lemon juice and several drops of the Worcestershire, and toss again. Taste for seasoning, and add more, if needed. Crack the egg and drop it right on the romaine leaves, then toss to break it up and coat the leaves. Sprinkle on the cheese, toss briefly, then add the croutons (and the garlicky bits in the pan, if you wish) and toss for the last time, just to mix them into the salad. Arrange 6 or more leaves in a single layer on individual plates, scatter the croutons all around, and serve.

“Homemade croutons are essential for our Caesar salad and a fine addition to a basic green salad as well as soups. You can enrich the cubes with melted butter before toasting, if you like, or flavor them after with garlic oil, as in the Caesar recipe. It’s easy to make a large batch and freeze any croutons you are not using the same day. Reheat frozen croutons in a low oven until crisp.”

Preheat the oven to 350 degrees F. Remove the crusts from 4 or more thick slices of home-style white bread and slice bread into 1/2-inch strips and then the strips into 1/2-inch cubes, to make 4 cups. Spread the cubes in a single layer on a cookie sheet and set in the oven for about 10 minutes, turning once or twice, until lightly toasted on all sides. Spread the cubes on a tray to cool before using or freezing.

The Caesar Salad – According to the Hotel Caesar’s Recipe