T-Boy’s adulation continues with the second episode in a series devoted to Celebrity Hotel Rooms & Suites. Part I covered the Ernest Hemingway Suite at the Sun Valley Lodge, the John & Yoko Suite at the Fairmont Queen Elizabeth Hotel in Montreal, and Paris’ Oscar Wilde Suite at L’Hotel. Here’s three more Celebrity Suites which proved to be both historical and enchanting experiences – on second thought, perhaps not the Jim Morrison Room as much, but it was still fun and rather illuminating on the obsessiveness of his fans.

There are Places I Remember — Lennon & McCartney 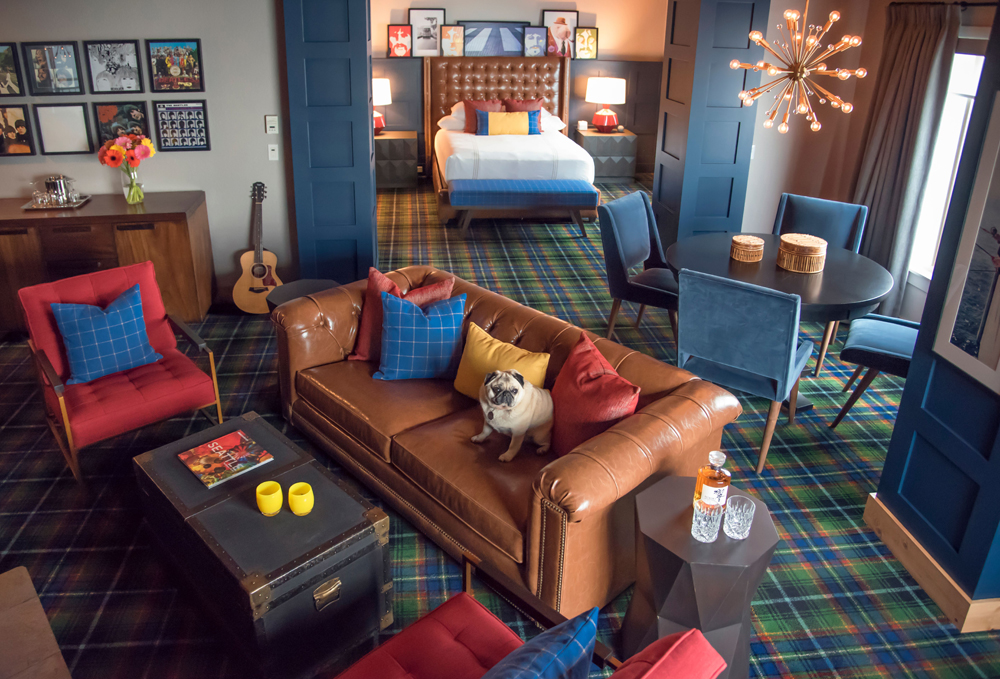 The Beatles’ Suite at Seattle’s Edgewater Hotel. Courtesy of The Edgewater.

What! The Beatles are actually in Seattle – this was akin to a religious experience. But where? Probably in some downtown location, but downtown was still a mere 15-minutes from the home of my youth, age 10 years old. Later I learned they were lodging at the very hip and modern Edgewater Inn (now The Edgewater) on the shores of Elliott Bay, just completed for the 1962 Seattle World’s Fair. At the time, no other hotel would accept them as guests; however, the Edgewater Hotel was an exception. I recall an older friend informing me that the Edgewater had to install cyclone fencing around the hotel to keep the screaming fans at bay. Some even tried swimming across Elliott Bay to reach them. After their concert, the Beatles were rushed back to the hotel in an ambulance, while taxi cabs and stand-ins were used as decoys. During their stay, the band famously fished from the window of their suite, a photo known throughout the world.

Years later, as a travel writer, I visited the hotel to get a peek at the Beatle Suite, number 272. I told the manager that I once bumped into Led Zeppelin’s Robert Plant in the lobby, after their 1973 concert at the Seattle Coliseum. Plant had a British flag over his shoulders, and was actually kind enough to speak with me. He even invited me to the post-concert party at the hotel. The manager replied, “Very interesting for Robert Plant is at the hotel this very minute.” Such is the charm of The Edgewater.

Today, you can stay in the same Beatle Suite, complete with memorabilia, history, turntables, records and music. The suite has been revamped with dark metals, white glass, leather, and designer lighting for a true Beatle experience. In fact, I stayed at The Edgewater that night. Aside from the Fab 4, I was happy to simply to be there, quietly enjoying views of Elliott Bay and the Olympic Mountains, plus remarkable Pacific Northwest cuisine in the Six Seven restaurant.

The Ritz is my home. – Coco Chanel

Coco Chanel was a French fashion designer and successful businesswoman. The founder of the Chanel brand, she was considered the forerunner in popularizing a sporty, casual chic in feminine modes of dress, replacing the “corseted” silhouette, hourglass figure that was in vogue in the post-World War I Paris. Chanel expanded her resume beyond couture clothing, adding jewelry, handbags, and the fragrant Chanel No. 5, where she designed the interlocked-CC monogram, which has been in use since the 1920s.

Gabrielle Bonheur Chanel was born in 1883 at a charity hospital run by the Sisters of Providence in Saumur, France. Her adolescent years were spent at an orphanage for abandoned and orphaned girls. It was a frugal life, demanding strict discipline; there she learned to sew, her only form of education.

Chanel found employment as a seamstress, but supplemented her income by singing in a cabaret frequented by cavalry officers. She was a poseuse, a performer who entertained the crowd between star turns. The money she earned was from tips on a passing plate. She acquired the name “Coco” when singing the song, “Who Has Seen Coco,” which transitioned to simply Coco. The crowd would often shout, “Where is the Coco girl?”

Chanel became the mistress of the French ex-cavalry officer and textile heir, Etienne Baisan, who showered her with diamonds, dresses, and pearls and introduced her to the lifestyle of the social elite. Later, Chanel became the mistress of Captain Arthur Edward ‘Boy’ Capel, a wealthy member of the English upper class. He financed her first boutique in Deauville, where she introduced deluxe casual clothing suitable for leisure and sport; hats, jackets, sweaters, and the marinière, the sailor blouse.

Chanel, determined to re-create the success in Deauville, opened a series of new boutiques, this time financed on her own, where she expanded her line with jewelry and perfume. She also paid Captain Capel back for his initial financial support in her first boutique.

Although Ms. Chanel had a luxurious apartment above her shop across the street, she moved to the Hôtel Ritz Paris in 1937, making Suite No. 302 her own.

The classic style of the suite is adorned with photographs, drawings and works of art that originally belonged to Chanel, many unfamiliar to the general public. The pairing of black and white – the DNA of the most copied fashioner of all time – creates a soothing atmosphere of style and relaxation.

When the music’s over, turn out the lights – The Doors

As a wide-eyed twenty something fresh off the boat from Seattle, I was stunned by all the movie and music history in Los Angeles, despite many of the sites and locations buried today. Wait a second, you’re saying the holy ground where film director D. W. Griffith’s monumental Babylon set from  “Intolerance” is now a Safeway supermarket! Fortunately, sites still standing could be found, if you knew a little of L.A. history and were willing to navigate through the city’s seemingly endless horizontal terrain. I was stunned to find that walking distance, just around the corner from my new apartment in West Hollywood, was Elektra Records, the music company that was home to The Doors, Love, Judy Collins and Tim Buckley.

Often times executives would arrive at the Elektra office in the morning and find a sleeping Jim Morrison by the outside door. Just one block up is the legendary watering hole Barney’s Beanery, where L.A. musicians would hang-out in the 60s thru today. A longtime L.A. resident informed me that he was at Barney’s when a drunken, rowdy Morrison was permanently banned from the bar.

Across the street, sandwiched between Barney’s and Elektra Records, is the decrepit Alta Cienega Motel, where Morrison crashed from 1968 to 1970. His room, room #32, now known as the Jim Morrison Hotel Room, is decorated with Jim’s portrait, personal belongings, Doors references, quotes, self-portraits and song lyrics. It’s immensely popular to book on Morrison’s birthday and Halloween, with some believing it is haunted by the ghost of Morrison. Well, it is a dark, literally and figuratively, otherworldly visual experience where everything is tagged by fans from the ceiling to the toilet. The musty room has not been upgraded since 1973, but its lack of charm is all about the fun. The toilet, though, is sparkling clean at time of check-in. Room 32 is a shrine to Jim’s world, and guests have no choice, but to play by his own rules; and that’s what they want.