I am an unabashed enthusiast of idolatry and hero worship and homages and there’s nothing I can do about it. Perhaps color me a patron of the arts, with the closest I’ll ever come to certain artists is by seeing their rooms or suites where they had once slept. Of course, the obvious way to enter the world of an artist is through their work of art. But you’re on your own on that one.

Granted, many celebrity hotel rooms and suites have been refurbished with mementos, books, letters, photographs and furnishings once the artist was deemed famous. So, for the first part of the series, we take a look at the images and history of the Hemingway Suite at The Sun Valley Lodge, the John & Yoko Suite at Fairmont Queen Elizabeth Hotel in Montreal, and the Oscar Wilde Suite at L’Hotel in Paris, where he spent the last two years of his life.

“Time is the least thing we have of.” – Ernest Hemingway 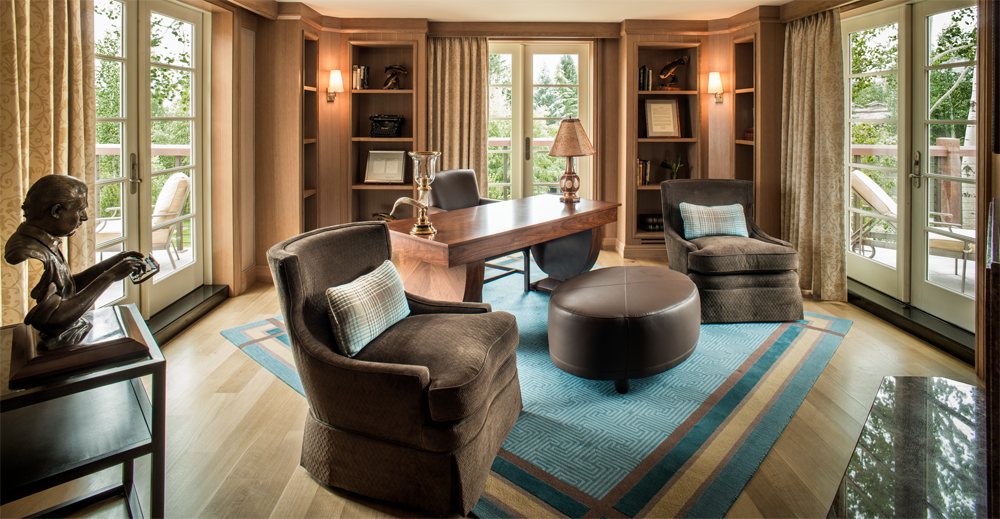 Hemingway had slept above me. That is one floor up from my own room at the Sun Valley Lodge, while I was enjoying a winter’s vacation at the resort. According to Sun Valley Lodge Press Department, it was love at first sight for the widely acclaimed writer and outdoorsmen upon his first arrival in 1939. The Sun Valley Lodge was new at the time, and executives invited a number of Hollywood celebrities such as Gary Cooper, Ingrid Bergman and Clark Gable in an effort to drum up publicity. Hemingway, an avid hunter and fisherman, was overwhelmed by Sun Valley’s vast great outdoors which he found both recreational and inspirational. Despite his famous face known throughout the world, he enjoyed a sense of anonymity, preferring to be in the company of local people as opposed to the Hollywood elite.

The PR department described the Pulitzer and the Nobel Prize recipient as a quiet, reserved man who spent most of his time writing and enjoying Sun Valley’s terrain, where fall was his favorite season. It is in Suite 206 where Hemingway completed his masterpiece, “For Whom the Bell Tolls.” He would wake up in early morning and start writing, oftentimes standing up. He once commented that he never missed a sunrise. Visitors can stay in Suite 206, decorated with photographs of the novelist as well as a bronze statue of the author at his typewriter.

Later in my trip, a PR representative escorted me to Hemingway’s final residence, a two-story house on 14 acres in nearby Ketchum, where he had taken his own life at age 61 years old. Hemingway never published any work about Sun Valley, with the exception of a single 1951 hunting article for True: The Man’s Magazine. But, in 2020, educator Phil Huss wrote “Hemingway’s Sun Valley: Local Stories Behind his Code, Characters and Crisis,” which focused on Hemingway’s adventures in Idaho. 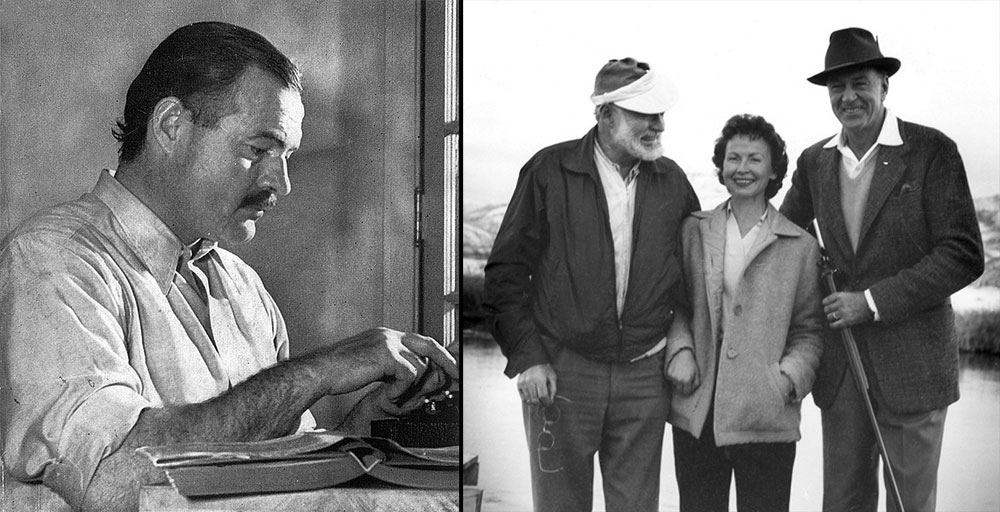 Perhaps Hemingway’s Sun Valley legacy is best represented by the inscription on his memorial sculpture, which he initially penned as an eulogy for a deceased friend who died in a hunting accident. The eulogy was requested by the man’s widow, but many believe it was about Hemingway himself.

“Best of all he loved the fall
The leaves yellow on the cottonwoods
Leaves floating on the trout streams
And above the hills the high blue windless skies
… Now he will be a part of them forever” – Ernest Hemingway. 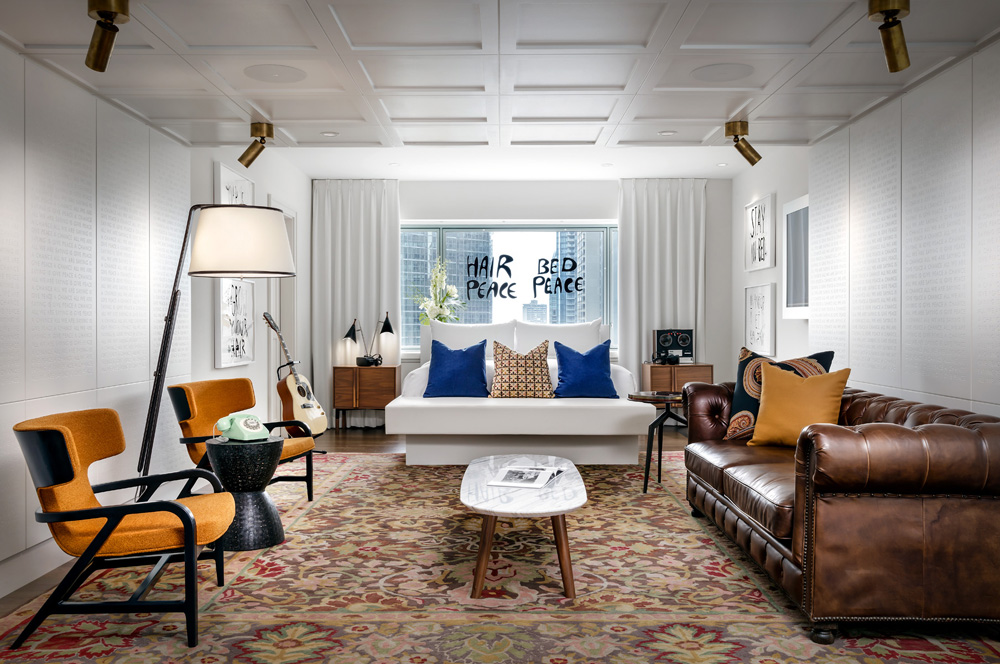 The song was written and recorded by John & Yoko during their ‘BED-IN’ advertising campaign for Peace, held in Montreal, Canada at the Fairmont Queen Elizabeth Hotel in 1969. Singing along were Tommy Smothers (also on guitar with Lennon), Timothy Leary, Petula Clark, Dick Gregory, Allen Ginsberg and whoever happened to be present. Much of the group would join in by clapping and singing the chorus. The original recording was cleaned up in a studio and augmented with more voices. The hotel staff and guests were less than impressed with their arrival where they were accompanied by a huge entourage of reporters, fans and Hare Krishna. Complaints were also made from the housekeeping team who had to vacuum the corridors three to four times a day as Lennon was prone to scattering flower petals. 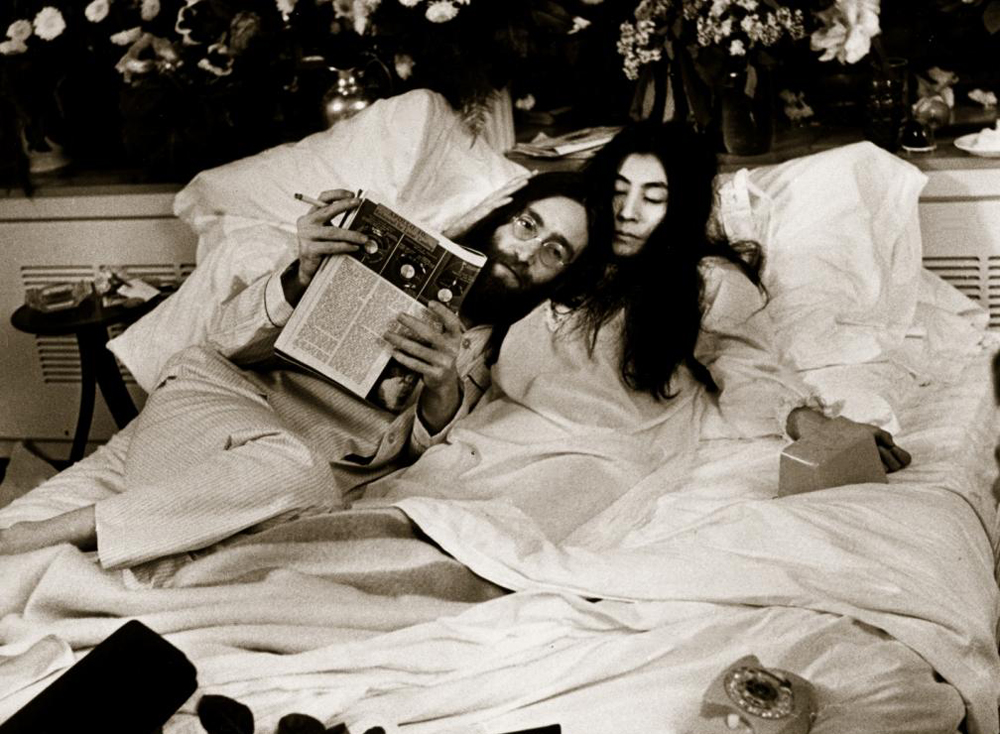 But why a “bed-in” for peace? Well, as the most publicized couple on the planet, they decided they would use that publicity for something that was important to them: Peace. ”We knew whatever we did was going to be in the papers. We decided to utilize the space we would occupy with a commercial for peace, ” Lennon later commented. ”We would sell our product, which we call ‘peace.’ And to sell a product you need a gimmick, and the gimmick we thought was ‘bed,’ because bed was the easiest way of doing it, because we’re lazy.”

The term “bed-in” also played on the ’60’s idea of a sit-in, love-in or a communal consciousness-raising event. 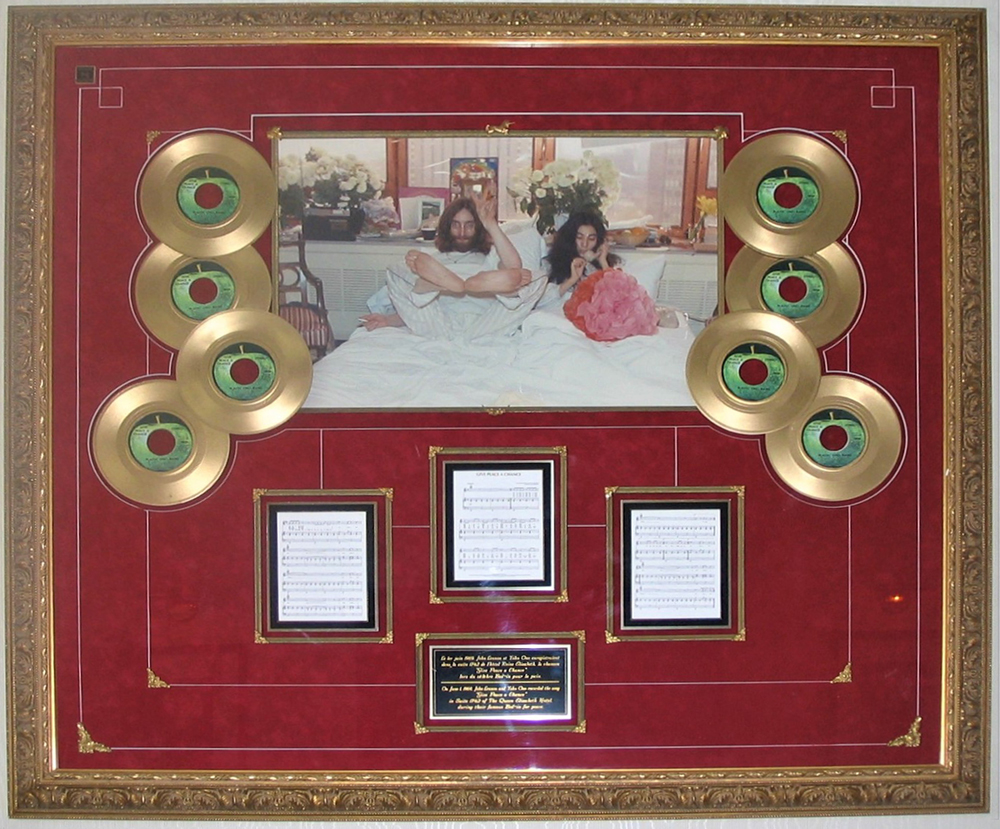 The living room and bedroom now feature memorabilia composed of press articles, framed gold records, stickers on the windows, and pictures of the famous couple.

The John & Yoko Suite 1742 can be rented for parties. Sometimes I will only make a pilgrimage to the room’s exterior, just to see the plaque on the door.

For information about the Fairmont Queen Elizabeth Luxury Hotel.

“I have the simplest taste. I am always satisfied with the best.”– Oscar Wilde 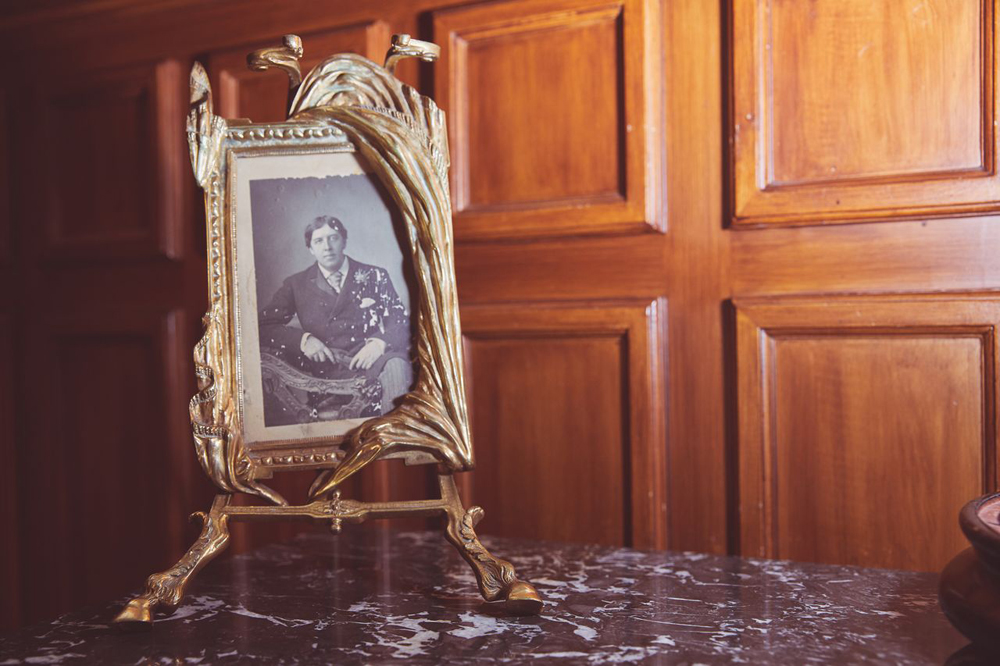 The Oscar Wilde suite is nothing less than a stunning homage to the brilliant writer. Photograph by Elliott Wakefield, courtesy of L’Hotel.

Irish novelist, playwright, poet and lyricist Oscar Fingal O’Flahertie Wilde took a basement room in Paris at the L’Hotel, previously known as L’Alsace, for the last two years of his life. Wilde first visited Paris in 1867 with his mother at the height of the “Belle Époque,” which made a profound impression on him and his art. Considered one of the greatest writers in the English language, the Dublin born Wilde achieved remarkable fame and fortune in the early 1890s. His work included “The Picture of Dorian Gray” (his only novel), and the plays, “The Importance of Being Earnest” (subtitled, “A Trivial Comedy for Serious People”), “Lady Windermere’s Fan,” “An Ideal Husband” and “A Woman of No Importance.” His talent was only met by his witticisms and flamboyant lifestyle.

In 1897, Wilde sought refuge in Paris after a two-year sentence (between 1895-1897) of hard labor in prison in London for sodomy and gross indecency – ‘crimes’ considered laughable by today’s standard. After leaving prison, Wilde adopted the pseudonym Sebastian Melmoth upon his arrival in Paris; where he was described as sick, poor and reliant on the few friends he had who had not turned their backs on him. 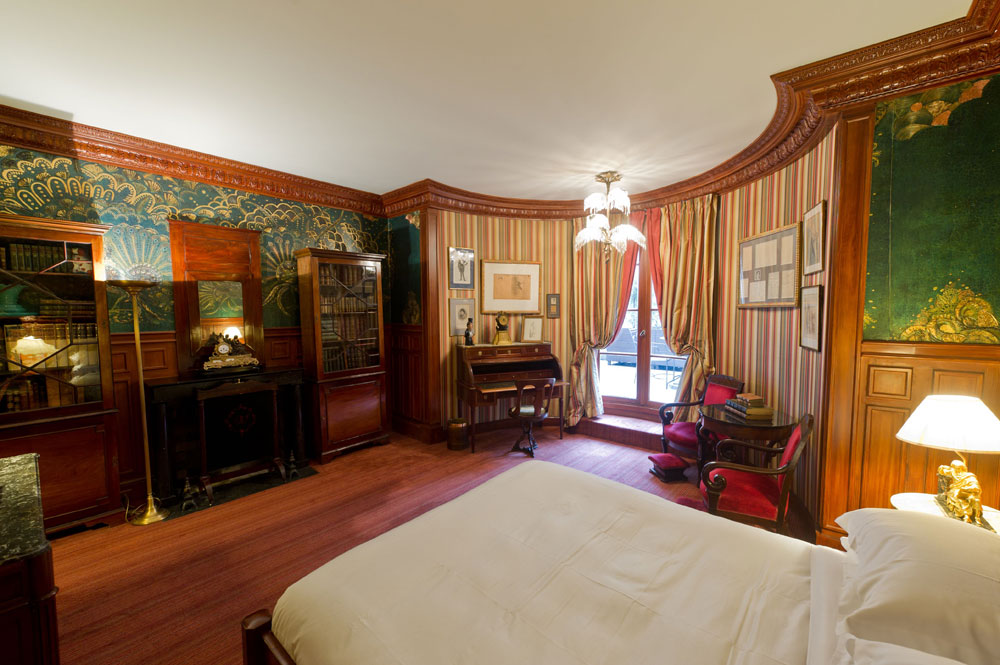 Oscar The Oscar Wilde bedroom at L’Hotel Photo by Amy Murrel for L’Hotel.

Wilde died in atrocious conditions… It is something we accept and make sure does not get forgotten, explained L’Hotel’s general manager, Julien Révah. He lived an austere existence, spending his days mainly eating soup and drinking plenty of wine, but not a good quality wine.

The hotel refurbished room number 16 on the first floor in his honor, where designer Jacques Garcia recreated what Wilde’s living room in London might have looked like. The room is decorated with personal details like photos of the author, caricatures, prints of newspaper articles and the last hotel bill which he was unable to pay all on display. The hotel has even kept the original headboard Wilde used during his stay.

L’Hotel is a boutique hotel, the smallest five-star hotel in Paris, and boasts a broad celebrity guest-list which included Salvador Dalí, Luis Borges, and Jim Morrison.

For further information about L’Hotel, or email stay@l-hotel.com.