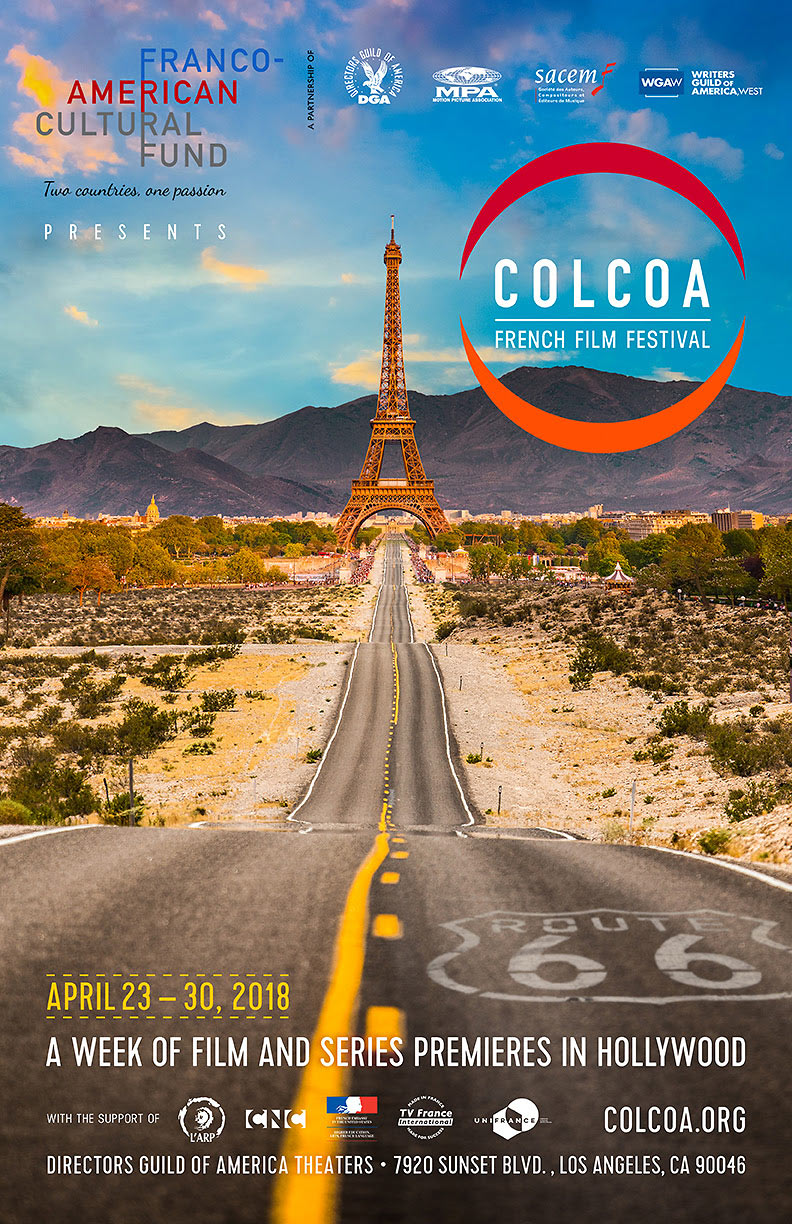 The 22nd annual COLCOA French Film Festival, the largest festival of its kind dedicated to French cinema and television series, recently wrapped up after eight days of screenings at the Directors Guild of America where a smorgasbord of 86 films, television and digital series, and VR programs were offered.  Competing for awards were 33 features, 23 short films, 12 television series, four documentaries, and four digital series. (The winners are listed below.)

Over 23,000 people attended the eight-day festival, which kicked off with a fabulous opening night gala where cameras snapped, wine flowed, and invited guests feasted on foods beautifully presented by an array of French chefs.  This annual cinematic journey through the works of famous and emerging directors, is a collaborative effort between the Franco-American Cultural Fund, the Directors Guild of America, Motion Picture Association of America, Writers Guild of America West, France’s Society of Authors, Composers and Publishers of Music, Directors and Producers (L’ARP,) the Film and Television Office of the French Embassy in Los Angeles, the CNC, TV France International, and Unifrance.

The memorable opening night film was Promise at Dawn (La promesse de l’aube,) which is based on the life of French novelist and diplomat Romain Gary.  The film, starring Charlotte Gainsbourg and Pierre Niney, each of whom give outstanding performances as mother and son, was adapted by Éric Barbier and Marie Eynard from Gary’s book, and is brilliantly directed by Barbier.  The story takes us through the life and times of a man who grew up with his unrelenting Russian-Jewish mother in the 1920s.  She filled him with seemingly impossible expectations and reminded him almost every day of her grandiose ambitions for him and even when he’s lying wounded in a military hospital bed, she instructs him to keep writing his book.

With too many to list, some of the outstanding films included: A Memoir of War, Makala, Return of the Hero, The Lady in the Portrait, Radiance, Plot 35, The Night Eats the World, Stand Up Girl, Some Like it Veiled, The Prince of Nothingwood, Christmas and Co, Naked Normandy, Let the Girls Play, The Guardians, Dog, My Son, Christmas and Co., Family is Family, See You There, Jealous, Radiance, Diving, Burn Out, Naked, School of Life, and C’est La Vie.  Screenings of television shows included: Infidelity, Through the Mill, I love You 2, and Proud. (List of films at COLCOA French Film Festival.)

With the potpourri of exciting cinematic and television works presented in this year’s COLCOA French Film Festival, one can eagerly look forward to next year’s edition, which will take place April 2019.

Coming Soon Award:
(Awarded to a film with a U.S. distributor)
Custody  (written/directed by Xavier Legrand)

American Students Award:
See You Up There (written/directed by Albert Dupontel)**

**Voted on exclusively by a jury of ten students from local area high schools and colleges.

Lady Beverly Cohn has been a journalist for the past 20 years and is an award-winning travel writer. She is Editor-at-Large of the Mirror Media Group, Editor-at-Large Worldwide for SPLASH Magazines, Entertainment Editor,Traveling Boy.com, Contributing Writer to the Community Media Group, Special Contributor to LAWEST.com, and SFV Media.com, and Contributing Editor,TravMedia.com. Her features cover a broad spectrum of subjects including travel, film and theatre reviews, as well as high-profile celebrity interviews.

Before becoming a journalist, Beverly was President & CEO of Nadel & Cohn Worldwide, a company that developed generic products for birthdays and anniversaries. Those products are FLIKBAKS (CD’s) and the 20-book series WHAT A YEAR! IT WAS! co-written with her daughter Laurie Rosenthal.

Beverly is a vintage and ballroom dancer and a member of three singing groups – The Santa Monica College Emeritus College Gospel Chorale, The Merits, and the Inner City Youth Orchestra & Chorale of Los Angeles. She is a member of BAFTA LA and the International Press Academy where she serves on the Foreign Film Committee. She is single and lives in Santa Monica, California.

Hollywood is a place where people from Iowa mistake each other for stars. — Fred Allen