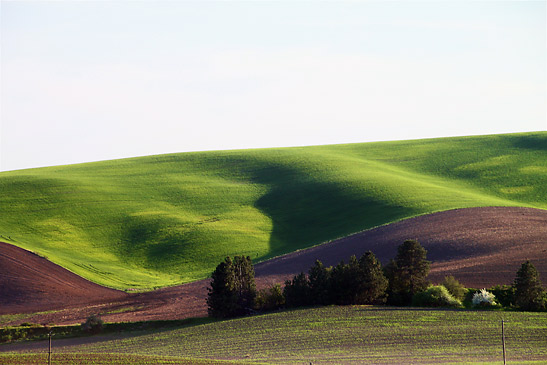 All photographs by Deb Roskamp unless otherwise noted.

While everyone seemed to be relocating north to Seattle, I bolted from my home town for the bright lights of Los Angeles. But I would return to my ancestral home often. While visiting, I would frequently kick myself for never exploring the amazing attractions outside of the western part of the state. Sure, I knew Western Washington’s Olympic and Cascade mountain ranges, the islands of Puget Sound, the rain forests and the rugged Washington coast well, but I never really gave the rich agricultural eastern part of the state, known more for sun than rain, a chance. This spring I decided to do something about it. The legacy of Spokane’s World’s Fair in Expo ’74 remains today at
the 100-acre Riverfront Park.

Nestled on the far eastern border of the state, Spokane was originally the home of The Spokans (“children of the sun”), who were drawn to the hunting grounds and abundance of salmon in the Spokane River. This changed with the arrival of the first European settlers who established a trading post and eventually a railroad industry that built the city.

Spokane – now the second largest city in Washington – was put on the national radar when it hosted the world’s first environmentally themed World’s Fair in Expo ’74. The event transformed the city’s urban core, removing the railroad yard along the river, converting it into the 100-acre Riverfront Park, the centerpiece of the fair. Its legacy remains today with many of the attractions still in use.

On what was a perfect Sunday afternoon, I strolled through the park, watching families frolicking on the Looff Carrousel and the Skyride which glides over the Spokane Falls. As I branched out into the city, it was easy to see that Spokane boasts the best of both worlds: a setting in spectacular natural beauty, but with a plethora of urban pleasures of a re-invented downtown, restaurants, bookstores and vibrant nightlife thanks to the presence of Whitworth and Gonzaga Universities. I was hungry to see more. So, I rented a car for an exploration of the Spokane Region, where I discovered a world of ancient cedar forests, pristine rivers, quaint small towns, deserted ghost towns and scores of golf courses.

Where to Stay in Spokane

The iconic Davenport Hotel is a grand hotel that stems back to the gilded age. It helped transform Spokane’s dying city core into a vibrant destination where people have returned to live.

The district is even named the Davenport Arts District. With that said, it is well-worth a self-guided tour, but it can be hard on the pocketbook.

A pleasant alternative to the Davenport is just down the street: The Montvale Hotel. On a much smaller scale than The Davenport, this property has re-imagined itself as premier boutique hotel with a modern twist, while still maintaining the ambience of downtown’s bygone era. If you’re in town just for the day, it too rates a tour.

On to the Palouse

In October 1805, Lewis and Clark arrived in The Palouse region. They were stunned by the beauty and magnitude of its landscape of rolling hills and plateaus. As with other tribes on their historic exploration, they made friends with the nomadic Palus tribe, renowned as expert equestrians. The term Appaloosa is a derivation of the Palouse horse. Traditionally, the Palouse region was defined as the fertile hills and prairies north of the Snake River in southeast Washington and north central Idaho. The Dahmen Barn’s attractions include a gift shop featuring art, fine crafts and products from the Palouse, artisans at work in their studio spaces who will share their creative process with visitors, a monthly art exhibition, and regularly scheduled classes and performance events.

There is no center to The Palouse Scenic Byway; it is a place to simply leisurely drive along the gentle curving highways, sprinkled with antique shops, wineries, easy access venues for hiking and biking, and, above all, photography. If you ever needed to stop the world and simply relax, this is the place for it.

Pullman – My Home Base

With a population of 27,030, the charming town of Pullman is similar to the much larger Spokane with spectacular natural beauty surrounding its core, plus offering urban amenities due to Washington State University towering above it. It’s also located right smack in the middle of The Palouse. There’s a refreshing small town feel, and the locals are welcoming and excited that you are exploring their area.

A number of Pullman restaurants have embraced the slow food movement with the emphasis on seasonal and locally grown food. With bread made with local wheat, produce from nearby farms, cheese made at the WSU and fish from the Snake and Columbia Rivers, you are quite literally tasting the landscape.

South Fork Public House is the brain child of co-owner of Jim Harbour, who is also a professor at WSU. Utilizing regional ingredients, they are known for their wine and beer pairings with seasonal local food items.

The Black Cypress is a venue that reflects the qualities of the Palouse region that keep people living here. A hybrid of Greek and local food items, owner Nick Pitsilionis places an emphasis on an appreciation for honest food, company, and drink. Many of the produce items come from his own farm.

And in-house smoked back bacon from a hog raised on the WSU campus, along with local apples and Guinness mustard, whose hops are imported from Yakima, Washington, served on the side. Guinness hops.

My favorite dish: Gazpacho – the best I’ve ever had – made completely with local produce, followed by Sage-Chipotle Pork Tenderloin with Vanilla-Fig Sauce, Yukon Gold Mashed Potatoes and Baby Bok Choy

A Holiday Inn may not seem regional or unique, but there’s something about Pullman’s Holiday Inn Express Hotel & Suites that takes service and amenities to the next level. And even better, The Palouse is right at your doorstep.

With the stars above and the lights below best describes Roskamp Vineyard’s enchanting position on top of Snipes Mountain in Central Washington’s Lower Yakima Valley. With the majesty of Mt. Rainer and Mt. Adams in the distance, the vineyard was the brainchild of Herman Roskamp (1922 – 2002) and his wife, Gay. They diligently dedicated themselves to the labor intensive work and patience of creating a world-class vineyard from scratch. The Yakima Valley has long been an abundant produce belt for the Pacific Northwest – not to mention its golden hops are exported to the Guinness brewery in Dublin – and it only made sense that vineyards would soon follow. Mr. Roskamp knew his vineyard would be a smashing success for the Yakima Valley is blessed with 300 days of annual sunshine and enjoys the same latitude as the great wine-producing regions of France. When the Washington wine explosion hit the market, Roskamp Vineyard was at the forefront, with their grapes widely sought after from major wineries. Recently two Roskamp Vineyard wines received national attention: The Co Dinn 2014 Roskamp Vineyard Block Two Syrah, which emotes an intense and distinctive bouquet of dark raspberry, herb and plum, and the premium Co Dinn 2015 Roskamp Vineyard Chardonnay that features a unique delicacy and complexity. Today Washington State is the second largest wine producer in the U.S. Mr. Roskamp was selected as Yakima Valley’s rookie wine grower of the year in 2001 at the age of 78-years-young. Roskamp Vineyard is currently managed by Gay Roskamp, son Michael and his wife, Shari.

What are some of the “things” or activities that French people do for fun? ANSWER: In the …