I have to apologize for my email last week it was crude and insensitive. I don’t know what came over me. I thank a dear brother who was bold enough to point out how offensive the article and the joke were. If I could retract my email, I would. Now I know how all the celebrities and politicians feel when they utter something so stupid.

Another brother said that it was “bad” but there were a lot worse jokes going around. I told him that Christians should be accountable to a higher standard. Christians may try their best but they are far from perfect.

The apostle Paul said that Christians should run the race with the intent to win. In our race called life, we are encouraged to be like Christ in all we do. I am part of that race and (unfortunately) last week, this runner stumbled — big time. Please accept my apology. There is no excuse.

“Do you not know that in a race all the runners run, but only one gets the prize? Run in such a way as to get the prize'”

1. Law of Mechanical Repair
Once your hands become coated with grease, your nose will immediately begin to itch and you’ll have to pee.

2. Law of Gravity
Any tool, nut, bolt, screw, when dropped, will roll to the least accessible place in the universe.

3. Law of Probability
The probability of being watched is directly proportional to the stupidity of your act.

4. Law of Random Numbers
If you dial a wrong number, you never get a busy signal; someone always answers.

5. Variation Law
If you change lines (or traffic lanes), the one you were in will always move faster than the one you are in now.

7. Law of Close Encounters
The probability of meeting someone you know increases dramatically when you are with someone you don’t want to be seen with.

8. Law of the Result
When you try to prove to someone that a machine won’t work, it will.

9. Law of Biomechanics
The severity of the itch is inversely proportional to the reach.

10. Law of the Theaters & Sports Arenas
At any event, the people whose seats are furthest from the aisle, always arrive last. They also are the ones who will leave their seats several times to go for food, beer, or the toilet; and the ones who leave before the end of the performance, or the game is over. The folks in the aisle seats come early, never move once, have long gangly legs or big bellies; and they stay to the end of the performance. The aisle people also are very surly folk.

11. The Coffee Law
As soon as you sit down to a cup of hot coffee, your boss will ask you to do something which will last until the coffee is cold.

12. Murphy’s Law of Lockers
If there are only 2 people in a locker room, they will have adjacent lockers.

13. Law of Physical Surfaces
The chances of an open-faced jelly sandwich landing face down on a floor are directly correlated to the newness and cost of the carpet or rug.

14. Law of Logical Argument
Anything is possible IF you don’t know what you are talking about.

15. Law of Physical Appearance
If the clothes fit, they’re ugly.

16. Law of Public Speaking
A closed mouth gathers no feet!

17. Law of Commercial Marketing Strategy
As soon as you find a product that you really like, the manufacturer will stop making it. OR the store you shop at will stop selling it.

Never Mess with an Indian
Sent by Don of Kelowna, B.C.

Ravi Zacharias is a popular Indian-born Canadian-American Christian apologist. He is one person who can debate even the likes of Einstein.

Thor: Raganork in 4D
Sent by Charlie of New Jersey

Only in Hollywood would you see a scene like this. Late Night host, James Corden, surprised a movie audience watching “Thor: Ragnarok.” Actors crash a screening of the film and perform a live-action rendition starring the original cast.

This is putting fun in your meals. I wonder how good the food is though if they need a gimmick to draw customers in. 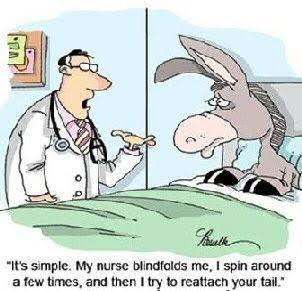