Newspaper Headlines of the Inauguration of Joseph Robinette Biden Jr. 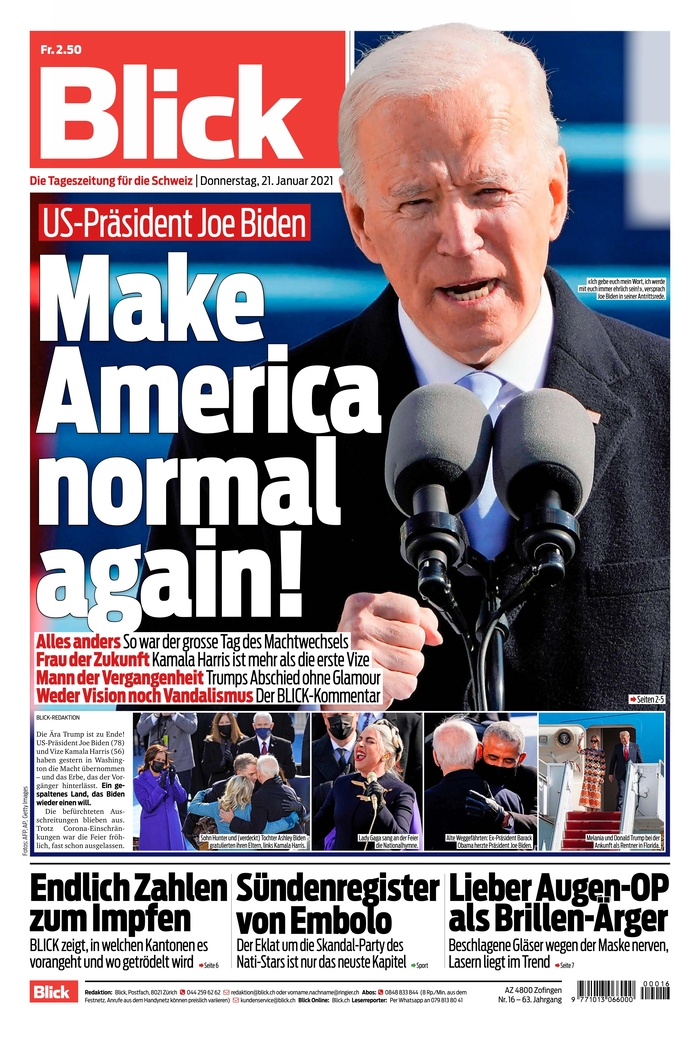 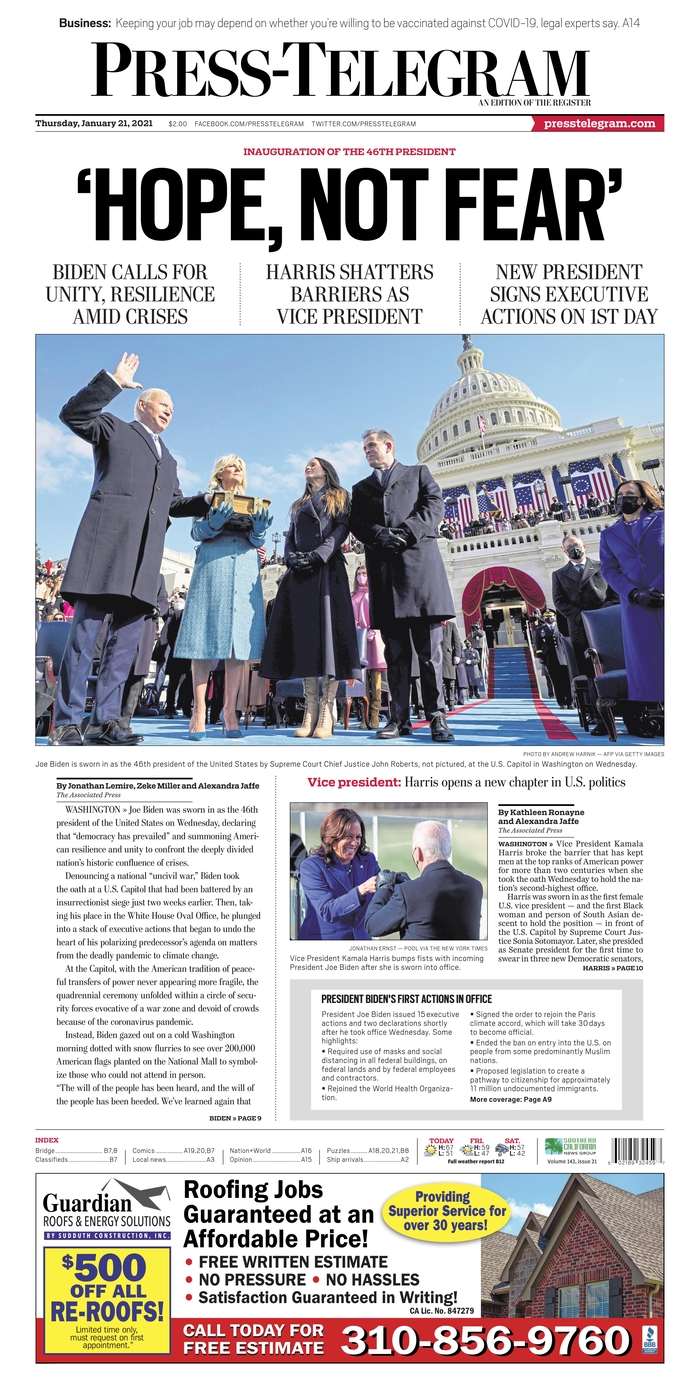 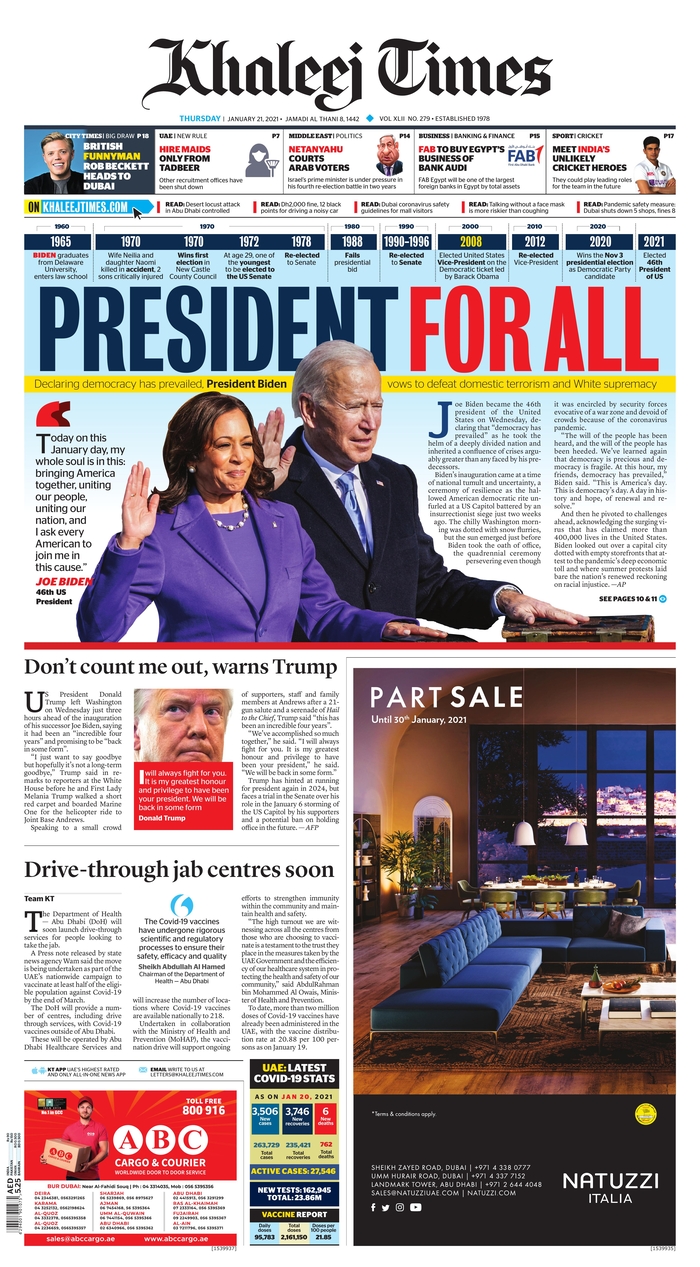 German-American schoolteacher Robert Meyer believed strongly that he should be allowed to teach his community the German language.

Just over a century ago, on May 25, 1920, Robert Meyer sat in a one-room church schoolhouse near Hampton, Nebraska, teaching 10-year-olds how to speak German by speaking the language himself. As Meyer lectured, he noticed a shadow pass by the sunlight doorway. It was the county attorney, who was investigating whether or not Meyer violated a new state law that prohibited the teaching of foreign languages to students who hadn’t passed the eighth grade.

For continuing to teach in German, Meyer was convicted and fined a full month’s salary of $25 under state law. He appealed his conviction through the judicial system, eventually making his way to the U.S. Supreme Court. The ruling in Meyer v. State of Nebraska helped set a precedent, that the state could not interfere with people’s choices in private matters, that would influence U.S. law for generations.

The non-U.S. born population in Nebraska peaked in the years after the territory achieved statehood in 1867. Around that time, approximately a quarter of Nebraska residents were born in another country, many from Germany, Ireland, and Czechoslovakia seeking jobs as meatpackers, farmers, and railroad workers. Immigration stayed at high levels until the 1920s when laws like the Immigration Act of 1924 set restrictive quotas over how many people could enter the United States legally.

At the time of Meyer’s arrest, Germans were the largest cohort of immigrants in the state. Over one-fourth of the “foreign-born white” population in Nebraska were Germans, according to the 1920 Census.

Born in the late 1870s, Meyer was 42 when he was arrested for teaching German. He wore round-rimmed glasses, parted his hair, and adopted a mustache that resembled a caterpillar. In the county where Meyer taught, German immigrants were a sizable presence and Hampton, in particular, hosted a strong presence of German-Americans. The Lutheran church where Meyer worshipped was established by German settlers early on in Nebraska’s statehood and it still conducted its business in German. For Meyer, teaching the language to his students was to pass on their cultural heritage; he approached his teaching occupation as if he were embarking on a religious vocation.

Meyer was teaching in an era were anti-German sentiment was particularly high. Following U.S entry into the First World War, politicians, newspapers and ordinary citizens launched various attacks against German-Americans. One way the discrimination against Germans manifested itself was in laws that prohibited foreign language instruction.

In 1918, the National Education Association, a union for school teachers, denounced the practice of teaching “in a foreign tongue to be un-American and unpatriotic.” More than 20 states, ranging from California to Illinois, passed laws that enforced English instruction in schools in an effort to squash the teaching of the enemy’s German language. “The German language was singled out for prosecution because German Americans were the largest ethnic group in the United States and the German language therefore was taught more widely in non-public schools than was any other language, particularly because German Americans had such a large network of parochial schools,” writes legal scholar William Ross in an email. “In other words, German language provided the largest target for the aggressive assimilationists.”

Nebraska’s legislature repealed a law that required schools to offer foreign-language classes if more than 50 students requested them. Eliminating the foreign-language requirement was a victory for Nebraska’s governor, who denounced it as being “vicious, undemocratic, and un-American.” A separate measure that required all children in the state to attend public schools, which would have prevented Lutherans from establishing their own schools and teaching German, failed by a single vote. The legislature succeeded, however, in passing an act that prevented foreign languages from being taught to students who hadn’t passed the eighth grade. Historian Jack Rodgers wrote decades later that Nebraska lawmakers were acting as “self-appointed conservators of American patriotism behind a program of repressing the use of the German language” when they worked to pass anti-foreign language legislation.

Meyer’s lawyer Arthur Mullen, a powerful Catholic Democrat and Nebraska campaign manager for perennial presidential candidate William Jennings Bryan, called the law “intolerant” and argued that it “grew out of the hatred, national bigotry and racial prejudice engendered by World War.” Those who violated the law and taught foreign languages to youngsters could receive up to 30 days in jail. “If these people are Americans, let them speak our language,” one legislator said at the time. “If they don’t know it, let them learn it. If they don’t like it, let them move.”

In response to the crackdown on foreign-language instruction, the renowned Nebraska writer Willa Cather registered her dismay, stating that “no Nebraska child now growing up will ever have a mastery of a foreign language, because your legislature has made it a crime to teach a foreign language to a child in its formative years, the only period when it can really lay a foundation for a thorough understanding of a foreign tongue.”

The debate over the language law mirrored the anti-German sentiment throughout the state. German books were burned. People suspected of disloyalty were forced to kiss the American flag. The rural village of Germantown was renamed Garland, in honor of Raymond Garland, the first Nebraskan soldier to die in WWI, who died of pneumonia before he reached a battlefield. The town of Berlin, Nebraska, was renamed to Otoe even though the town originally was likely named after a local farmer, not the German city. In the state capital of Lincoln, the mayor prohibited a visiting orchestra from playing works by German composers. The state university’s newspaper published the headline “REGENTS READY TO RID UNIVERSITY OF EVERY SUSPICION OF DISLOYALTY” and ran letters that criticized the university for promoting “German culture” on campus, which led a German student group to disband. University professors were interrogated, and in a few cases forced to resign, over their loyalty to the country. Nebraskans who joined the Nonpartisan League and protested US involvement in the war were beaten, threatened, and prohibited from conducting public meetings. “While fighting to make the world safe for democracy, Nebraskans nearly lost it at home,” wrote historian Bruce Nicoll.

When an official in Campbell, a south-central Nebraska town, asked the state attorney general if an ordinance forbidding the speaking of foreign languages in the village streets would be legally valid, the state’s top law enforcement officer replied in the negative, but assured that “prudence and public policy will, no doubt, in the near future, prompt those of foreign birth to desist as far as possible in the use of their native language.”

Meanwhile, Nebraska’s Council of Defense, launched its own attacks against foreigners coming into the state. The council supported the legislature’s campaign to halt the teaching foreign of languages and it pressured churches to eliminate foreign languages from their worship services even though many parishioners were immigrants who could not speak English. One Lutheran minister was rebuked by local leaders for giving a speech in German at a soldier’s funeral. At the Zion Lutheran school near Hampton, vandals shot out the windows and destroyed the school’s German books in protest of the German lessons being taught there.

It was soon after this attack when Meyer, an instructor at Zion, was charged for violating the new law. Among Meyer’s many detractors included the American Legion. In an amicus brief, the American Legion stated: “We must eliminate every influence that tends to perpetuate foreign ideals and foreign influences.”

Meyer saw things differently, of course. “This is a question of principle,” Meyer declared. “If I go to jail, I shall not compromise what I know is not right.” Meyer strongly believed he had a responsibility to help his students experience “the religion of their fathers in the language of their fathers,” teaching them German so that they could fully participate in worship at their Lutheran church, where services were given in German.

His legal journey ended when, in a seven-to-two decision, the U.S. Supreme Court ruled that Nebraska’s law was unconstitutional because it infringed on an individual’s right to acquire knowledge and worship freely. “Mere knowledge of the German language cannot reasonably be regarded as harmful,” the court declared in Meyer v. State of Nebraska. Associate Justice James Clark McReynolds delivered the opinion: “No emergency has arisen which renders knowledge by a child of some language other than English so clearly harmful as to justify its inhibition with the consequent infringement of rights long freely enjoyed. We are constrained to conclude that the statute as applied is arbitrary and without reasonable relation to any end within the competency of the state.”

Despite the ruling in the Meyer case, Nebraska’s state constitution still features a provision stating that English is the state’s official language and must be used as the language of instruction in schools. Voters overwhelmingly rejected efforts to redact this unenforceable clause.

While Meyer was unable to force the repeal of the foreign-language law from Nebraska’s constitution, his victory had a powerful affect nationwide. The Supreme Court’s Meyer decision helped create the legal right to privacy that was later cited in numerous court cases, such as the Griswold v. Connecticut case that removed prohibitions around contraception access and Roe v. Wade, which legalized abortion nationally. The Meyer case is referenced in legal decisions about various issues including parental rights, homosexual conduct, and education.

“Although the scope of the liberties recognized by Meyer is likely to continue to cause controversy,” wrote legal scholar William Ross in his definitive account of the Meyer case, “its ruling that ‘the individual has certain fundamental rights which must be respected’ is likely to endure as long as the nation has citizens who are as willing to fight for rights as courageously as did a Nebraska schoolmaster nearly a century ago.”

Traveling to Locations Close to Home

Traveling to Locations Close to Home is the theme of our latest T-Boy Society of Film, Tra…