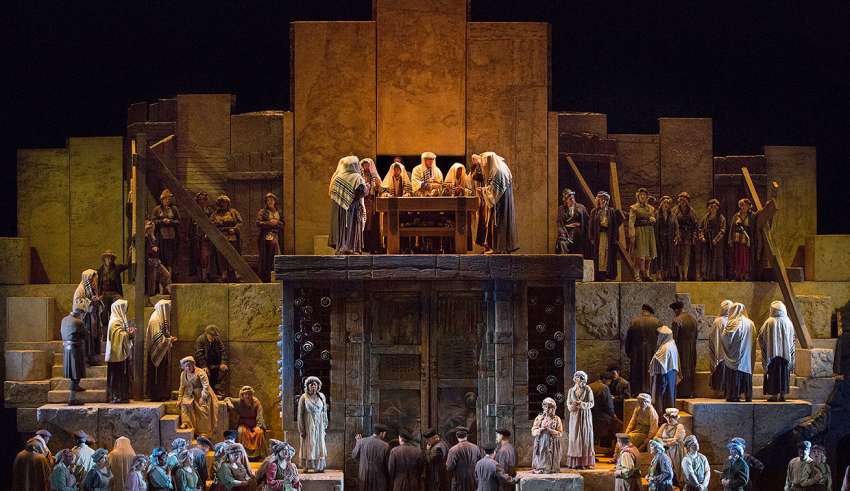 Pack up some picnic vittles and a soft chair cushion.  It is once again time for the free—as in it costs no money—eleven nights of opera (nine operas, as “Tristan und Isolde” is presented in two parts, on successive evenings, and the series kicks off with an operatic film), The Met:  Live in HD, in the Plaza at Lincoln Center. The musical bounty starts Friday evening, August 25th, and ends September 4th, Labor Day.  It is one of the greatest gifts that residents of the Big Apple and tourists receive.  This is the ninth year that it is being staged, gathering increased critical mass annually, becoming more and more popular, even among people who have never sampled opera before, much less savored it.  (Last year more than 40,000 people attended; the seating in the Plaza accommodates 3,000, on a first-come, first-served basis.)

The Live in HD performances are affecting, intimate, and imminently accessible.  Presented in a larger-than-life fashion on the massive screen against the opera house’s facade, each opera is fully translated with subtitles, so no need to try to divine what is happening, which can be particularly vexing in some of opera’s more complicated, convoluted, logic-defying, plot-twisting libretti. The first evening is the 1975 film of “The Magic Flute” (“Die Zauberflöte”), as conceived by Ingmar Bergman, and it is presented as a joint venture of the Met and the Film Society of Lincoln Center.  The Met has added a film for the first evening’s viewing each season for the past several years—last year, it was “West Side Story.”

Operatic superstars abound in these Live in HD productions—Diana Damrau, Peter Mattei, Piotr Beczała, Susanna Phillips, Eric Owens, Kristine Opolais, Juan Diego Flórez, Nına Stemme, Roberto Alagna, Anna Netrebko, Plácido Domingo, and Thomas Hampson, to name but a baker’s dozen of the many who comprise the star-studded roster.  So, come early, bring your dinner (and a cushion to put on the hard plastic chair seat), make new friends with those around you, and enjoy the fabuloso gift of The Met: Live in HD that is bestowed upon us. It is made possible by generous support from the Robert W. Wilson Charitable Trust, with additional funding provided by the Howard Gilman Foundation; the original transmissions of The Met: Live in HD are supported by a grant from its founding sponsor, The Neubauer Family Foundation, with global corporate sponsorship provided by Bloomberg Philanthropies.

Friday, August 25, 8 pm
Director Ingmar Bergman was a lifelong fan of Mozart’s late operatic masterpiece “Die Zauberflöte” (“The Magic Flute”), having seen the work as a young boy. He went on to create a cinematic version of the opera, sung in his native Swedish, that blends 18th-century stagecraft with fairy-tale adventure. For the film, maestro Eric Ericson conducted the Swedish Radio Symphony Orchestra and a cast that included a number of young Scandinavian artists, most notably baritone Håkan Hagegård—who sang nearly 90 performances for Met audiences—as the charming bird catcher Papageno.
Approximate running time: 2 hours 15 minutes

Saturday, August 26, 8 pm
Željko Lučić stars as the brooding title character in Michael Mayer’s neon-bedecked production, which updates the action to Las Vegas in 1960. (The Duke’s henchman are appropriately decked out in brocade tuxedos that speak to the era perfectly!) Diana Damrau is his impetuous daughter, Gilda, alongside Piotr Beczała as the licentious Duke. Original transmission: February 16, 2013
Approximate running time: 2 hours 20 minutes

Sunday, September 3, 8 pm
As the title king of Babylon, Plácido Domingo adds another role to his historic Met career, joining forces once again with Music Director Emeritus James Levine. The Metropolitan Opera Chorus delivers a poignant performance of Verdi’s famous “Va, pensiero,” just about the only chorus (or aria, duet, trio, quartet, for that matter) that is encored at the Met, giving the sensational chorus its due. Original transmission: January 7, 2017
Approximate running time: 2 hours 25 minutes

Monday, September 4, 8 pm
Verdi’s timeless tragedy stars Sonya Yoncheva as the conflicted courtesan who hopes that pure love can save her from self-destruction. Michael Fabiano is her beloved Alfredo and Thomas Hampson is the imperious father standing in the way of their happiness. This is a modern-day update and another one that is stark in its use of chiaroscuro, but brightened by the occasional bolt of vermillion and by a pair of bathrobes stitched from a veritable flower-bed of fabric); however, despite its interest, it has me hankering for the two older Zeffirelli, lush, traditional productions. Original transmission: March 11, 2017
Approximate running time: 2 hours 20 minutes

Ruth J. Katz is a well-known luxury and lifestyle journalist based in New York City. She is currently the Features Editor of New York Lifestyles magazine and a Contributing Editor to Bold magazine. Prior to that, for seven years, she was the style and travel editor at the upscale, NYC-based Promenade magazine. She has been a contributing editor to New York Home, Redbook, Golf Connoisseur, The Modern Estate, Classic Home, and many other upmarket publications.

She began her career writing extensively for both The New York Times and New York magazine, where she covered service, shopping, consumer topics, and luxury lifestyle. The author of five books, she was also the on-air home services expert, appearing weekly, on the Fox flagship television station in New York City, and she hosted a show on the USA and the Lifetime television networks. She has traveled to nearly 100 countries and looks forward to adding many new destinations to her wish list.

Notes Katz: "Just as you cross off one destination from your list, you add three more — your curiosity is constantly itching to experience more...and more."