I’ve visited many of the famous and yes, infamous, battle sites and related military places in Europe but, until a few years ago, I’d never had time to see – up close and VERY personal – the Mohne Dam in Germany. Before YOU read any further, do YOU know why it fits into either of the above categories?

The Möhne Reservoir, or Moehne Reservoir, is an artificial lake in North Rhine-Westphalia, some 45 km east of Dortmund, Germany. It became a top tourist attraction many years after the event, and in 1955 a top grossing British movie about it called “The Dambusters” was made. Not to be “outdone,” the British RAF occasionally re-create the Moehne Dam raid, by having a classic WW2 Lancaster fly – very low – over the Derwent Dam in Northern England. When I visited the Moehne I thought it was fascinating that most of the people there were young. Indeed, I heard one English speaking person say, “I wonder what actually happened here?”

Here’s how it became a top tourist attraction.

In World War Two (WW2) the British Royal Air Force (RAF)  knew that if the Moehne, and two other Dams – the Eder and Sorpe – were destroyed, the subsequent release of millions of tons of water would cause substantial damage to the land, buildings and infrastructure below it, as well as hurting the German WW2 economy overall. The British called what they had in mind, Operation Chastise. 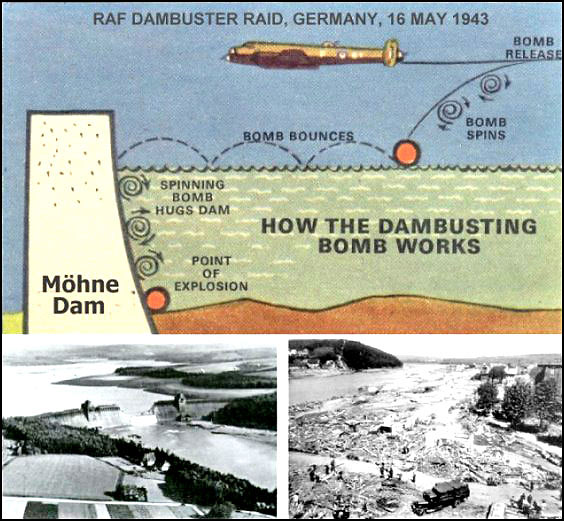 The problem was how to destroy the Moehne, Eder and Sorpe Dams. Back then in 1943, it proved far too difficult to actually hit the Dams and demolish them. A brilliant British scientist called Dr. Barnes Wallis was watching some kids flipping and skipping flat coins across a pond and, seeing how many times it would “bounce” before it sank, and it gave him an idea on how the Dam could be breached: design a bomb that could “bounce” across the lake and reservoir and “drop” this bouncing bomb right by the Dam wall where, it was hoped, it’d sink to the bottom and explode, subsequently creating water pressure so intense it’d insure an even bigger eruption – and collapse the Dam wall.

The RAF formed a special squadron of Lancaster bombers (#617 squadron that still exists today) to carry out this highly unorthodox and dangerous mission. Adding to the danger, the RAF’s Lancaster crews’ who’d fly the mission, were stunned to learn they’d have to fly about 50 feet above the Lake, and drop their bouncing bomb at the precise place for it to work.

Because precision on THIS mission was absolutely critical, it’d help (enormously) if they could practice. But how and where? Located in the northeast of the British County of Derbyshire (the nearest city is Sheffield) is the Derwent Dam and, it’s almost identical to the Moehne Dam in Germany. It gave the RAF crews a superb opportunity to practice the “almost real thing.” If, on your visit to Britain, you plan on seeing the Derwent as well as the Mohne, the countryside surrounding the Derwent Dam is the epitome of “Green,” with healthy hills, vast valleys, riveting rock faces, colorful cycle paths, magnificent moors, and a favorite place for runners, climbers and hikers, all made even more beautiful by the Peak District National Park.

On the 16th and 17th of May, 1943, the Lancaster bombers of 617 squadron, with each of the 19 aircraft carrying a purpose-built “bouncing bomb” developed by Barnes Wallis, attacked the Möhne and Eder Dams. Both were breached, the Mohne more seriously than the other two, and it caused catastrophic flooding of the Ruhr valley and of villages in the Eder valley; the Sorpe Dam sustained only minor damage. Overall two hydroelectric power stations were destroyed and several more damaged. Factories and mines were also smashed or destroyed. An estimated 1,600 civilians – about 600 Germans and 1,000 mainly Soviet forced laborers – died. Despite rapid repairs by the Germans, production did not return to normal until September of 1943 – nearly 5 months AFTER the raid.

On my visit it was surreal to walk on the actual top part of the Dam and imagine being there when it happened, and seeing those RAF Lancaster bombers roaring in seemingly inches from the top of the Lake. Be sure YOU go visit this unique German Dam and envisage the event  yourself – and yes, see if you feel the same.