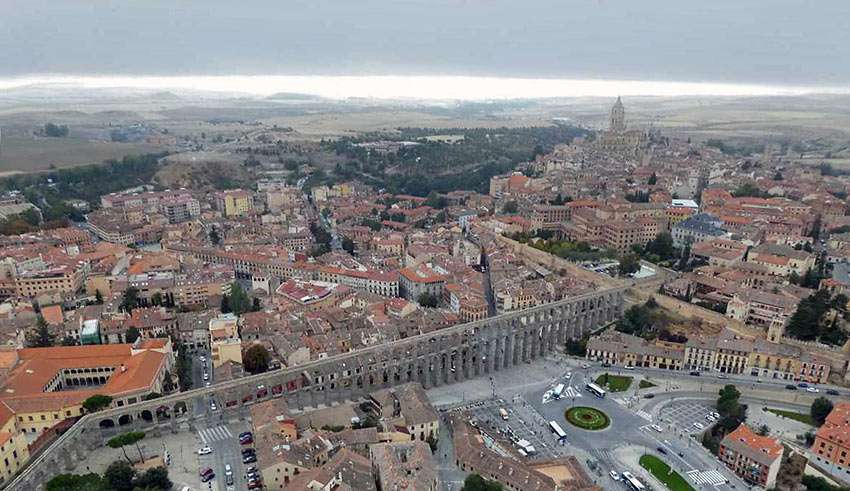 Segovia’s famous aqueduct from above. Photo by Richard Frisbie.

On my recent visit to Castilla y Léon, Spain, my fifth to the region, I knew there were so many new things to see and do, as-well-as so many I’d done before that I wanted to do again, that I couldn’t possibly fit them all into one week. Never-the-less, I tried!  The result was a fun-filled but exhausting visit, one that left enough undone to warrant going back another season.

First off, while all the big cities are an easy hour-plus drive from Madrid and the airport, the high speed trains are faster and much more relaxing. Imagine being seated at a table erasing the horrible taste of airplane food by eating the Spanish equivalent of a ham hero – a bocadillo on a barra de pan – using the finest jamón prepared fresh for your journey, while watching the fertile landscape zip by. It took a little planning to arrange that picnic, mostly picking up the sandwiches and managing not to eat them until boarding the train, but it was worth it as the perfect introduction to Castilla y Léon.

My companions and I arrived refreshed in Segovia, one of the few cities in the region I hadn’t visited. What a beautiful city it is! Especially the old quarter, the fortress, cathedral, and the most magnificent 2000+ yr old Roman aqueduct, which is the best-conserved Roman aqueduct in the world. At more than nine miles long and just under 100 ft high in the tallest place (Azoguejo square) the triple arches of the aqueduct survived the centuries in a simple stone-on-stone build with no mortar to hold them together.

Our guide, whom we engaged at the Information Center in Plaza del Azoguejo square, saw us straining our necks looking straight up at the beautiful structure and suggested the best viewing place would be from the top of the Postigo steps beside it. While we later found a better vantage, she was right in saying that it was easier to appreciate the massive scale of the aqueduct spanning the square from those steps.

Once back down in the square, we walked up Calle Real, through the Jewish Quarter, and after visiting the sights I mentioned earlier, (a cathedral is a cathedral is a – very lovely – cathedral) we entered the Plaza Mayor. Every Spanish city has one, a place where city life congregates, and Segovia’s was no exception.

Here is an unusual fact about the medieval quarter of Segovia. St Michael’s church is where Isabella, the Catholic, was crowned Queen of Castile. When the square was expanded, Isabella paid to have the church moved to the edge of the new square to preserve her coronation site.

After some people-watching over a refreshing café double and the ever-present plate of jamon, we improved our appetite on the walk back to Azoguejo square to the most famous restaurant in Segovia – Mesón de Cándido.

You realize that Mesón de Cándido is a big deal restaurant when you see a huge statue of Chef Cándido as you enter the city. He’s the one who put his families’ humble inn on the map in the early 1900s. We navigated through the outdoor seating (in the shade of the aqueduct – what a view!) to climb a staircase to the second floor dining room. From its beginnings in 1884, Cándido’s has grown into a large restaurant that looks like a history museum, with every available space sporting a photograph of famous people, dignitaries, and even the king, all surrounded by old serving utensils presumably gathered during the 100 years the restaurant has been internationally known. The many small tables were packed with tourists and couples, or pushed together for local families on a celebration, and us, with a tantalizing aroma of good food mixing with the multi-lingual conversations. Our expectations were heightened; it turns out for good reason. Mesón de Cándido is not just the place to be seen; it is the place to eat!

A video of Segovia includes the aqueduct and dining at Mesón de Candido. Video by Richard Frisbie.

Mesón de Cándido is famous for its cochinillo asado (roast suckling pig). Order it for the sheer spectacle of it, and eat it for the joy of fine dining and delicious food. The founder’s grandson is the Candido immortalized by a statue in the roundabout. He received numerous gold medals for his contributions to tourism and cuisine, and held the title: “The Greatest Innkeeper of Castile”.  He was the abuelo (grandfather) of the current chef, the fifth generation Candido, whose father continues the show his father started of carving the roasted pigs with a plate and then breaking the plate on the floor. Mesón de Cándido is very much a family affair and pure theater – it is a sight to behold!

I’ve had suckling pig before, but this one was remarkable, due – in part – to the brining and then basting with lard in a hot oven to deliver a moist flesh with a crisp skin, but it was elevated by the setting and the ceremony of carving, certainly. Mesón de Cándido is a must visit when you are in Segovia.

A video of the five different hotels we stayed at in Castilla y Leon (including a castle!). Video by Richard Frisbie.

Remember that I mentioned we found a better place to view the aqueduct? Well, after a much-deserved night’s sleep at Hotel Exe Casa De Los Linajes, we got up early to an overcast sky, and drove out of the city to the surrounding plains where balloons were being readied for a morning flight. We slowly lifted off and floated over a hill disturbing dozens of rabbits who scurried to the safety of their warrens. Then, equally animated, but running towards us instead of away, was a grade school recess of about a 100 kids waving and yelling until I was sorry not to have brought candy to drop to them.

The rain stayed distant and the breeze strengthened to carry us higher over the city for the best views of the aqueduct ever! Yes it is impressive standing under it looking up, but to be able to see all 9 miles of it bisecting the city to the distant hills was an amazing sight I’ll never forget. Nearly as good was our safe landing in a cow pasture on the other side of the city, celebrated with a toast of champagne. This being Spain, I asked: “Why not cava?”

The answer was a charming story of the first hot air balloon ride ever. It was in France. The King gave a bottle of his finest champagne to the brave first team to ever attempt such a feat. When they landed, miles away in a farmer’s field, they were set upon and almost killed by the farmer because he thought they were aliens, or the devil, never having seen a hot air balloon before. It was the King’s bottle of champagne that convinced the farmer that they were fellow humans, subjects of the King, and they were spared. And that’s why there is always a champagne toast after every flight.

Afterward we packed up our things and moved on to another great city, Salamanca, just so I could see again the giant redwood trees (Sequoia) grown from seeds Christopher Columbus was rumored to have brought back from the new world. That myth was shattered for me when our guide said that historians had determined the trees were the gift of an arborist whose son attended the 800+ year old Salamanca University, and that he got them from a Russian arboretum . . . blah, blah, blah. I stopped listening to the dry academic account because too many people during previous visits told the more romantic, apocryphal tale, and I didn’t want to spoil the memory. So – believe what you will, but be sure to admire the oldest redwoods in Europe – they’re magnificent! So is Salamanca.

I’ve written elsewhere about Salamanca (the “Golden City” with two cathedrals joined together) and other cities and farms in Castilla y Leon. You can follow these links below to read more about them:

The Tuscany of Spain

Hotel Exe Casa De Los Linajes  is a very comfortable 3 star hotel that from the outside is medieval in style, but inside you’ll find vintage design with all the modern amenities you’ll need for a refreshing stay. It is just five minutes away from the Plaza Mayor and the Cathedral, in the center of Segovia.