Home Travel News Worst Seats on a Plane and Overtourism 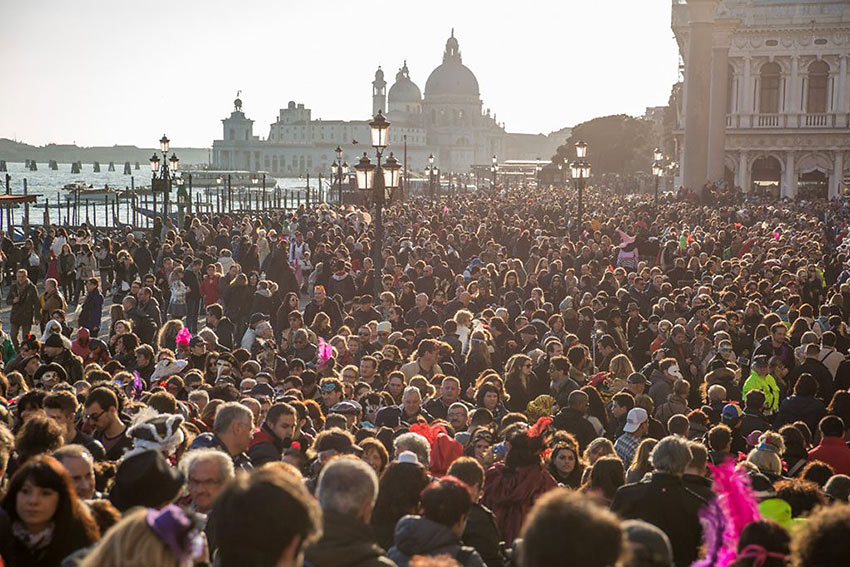 The situation is likely to get much worse, with the number of international travelers predicted to grow to more than 1.8 billion by 2030, an increase of more than three per cent a year since 2010, according to Clare Jenkinson, senior destinations and sustainability manager for the Association of British Travel Agents.

“If not managed properly, large numbers of tourists can put a strain on a destination’s infrastructure, its community and its environment,” she said. “Travel companies are increasingly aware of the impact tourism has on a community.”

Not surprisingly, overtourism is fast becoming a bigger issue for travel advisors and their clients.

“Crowds are a fact of life and sometimes cannot be dodged, so we need to accept this as part and parcel (of the travel experience),” said Mark Chaskiel, chief executive of FBI Travel, a boutique agency in Melbourne, Australia.

Along with the situation in Venice and Barcelona, FBI Travel is increasingly hearing about overcrowding in Bali, long a popular destination for Australian tourists. It’s also becoming a problem for such far-flung destinations as Africa, Galapagos, and Iceland as well as for expedition cruises, Chaskiel noted.

Travel advisors have a key role in managing their clients’ expectations, even at times telling them not to go to certain places, he added. Other times, it’s a matter of suggesting alternatives, especially trips with different value propositions that could be activity-related or associated with nature, food or culture.

“We can easily fall into a trap of just doing what the client wants, without being proactive with them — and I keep this in the forefront so they can take it into account in their planning,” he said.

Advisors at TravelStore recommend traveling in shoulder season, going to “less touristy areas,” or “balancing an itinerary for those who must get to jammed sites with others that aren’t jammed, and avoiding peak times.”

However, Ilves also noted that it’s important not to confuse congestion at certain tourist sites with overcrowded destinations.

“For example, the Vatican is always packed, La Sagrada Familia in Barcelona is jammed, Venice is packed in season, and Iceland suffers from a lack of hotels and too many tourists crowding the island (in season), and Japan can be crazy busy,” he said. “However, travelers will still go to Rome and Barcelona and still want to go to Iceland and Japan.”

Overtourism is a central issue for Responsible Travel, a UK-based online agency committed to “raising awareness of controversial and important issues.” On its website, the agency places blame for overtourism squarely on the travel industry, and its focus on growth “with little or no concern for the impacts.”

Justin Francis, CEO of Responsible Travel, told Skift that overtourism is a problem that stretches beyond crowded European capital cities.

“Even very tiny and less well-known places are susceptible to overtourism if tourism is not designed and operated responsibly,” he said. “A small community with limited parking and just one good restaurant can be overrun by even one coach. Taking 10 properties out of the housing stock purely for Airbnb can have an impact on availability of affordable housing for residents.”

To combat the threat, he said Responsible Travel does not include large-scale cruises on its website because “it is too high impact with too little economic benefit. We also sell no mass tourism, for the same reason.”

The latest European Union study recommends that destination management organizations and local governments soften the negative effects of overtourism by spreading out visitation, improving the capacity of infrastructure, accommodation and facilities, and targeting inappropriate visitor behavior.

Jenkinson at the Association of British Travel Agents has a similar view.

“Government departments, travel companies, NGOs (Non-Government Organizations) and the local community need to work together on a shared strategy to managing a destination, whether that’s encouraging visiting at off-peak times, promoting longer stays, distributing tourism beyond just the most popular sites,” she said.

Listen to a Skift Podcast on Overtourism Solutions

“In Southern Europe, winter and autumn light can be magical and more bearable than the summer heat, as global warming pushes up average temperatures,” he said.

Ilves at TravelStore observes that the travel industry is already taking some steps to mitigate overtourism.

“Even tour operators like Globus and Trafalgar have been creating new itineraries that visit more off-the-beaten-path locations, so that their energies aren’t all focused on the popular destinations,” he said.

“Cruise lines are offering different types of shore excursion experiences, and more of them, so the crowds of people are dispersed, rather than hordes all going and doing the same thing.”

Where Are the Worst Seats on a Plane?

The worst seats are generally “in the last row of the aircraft,” says David Duff, Content Specialist at SeatGuru, SmarterTravel’s sister site. “The seats [there] more than likely have limited recline, [and] the proximity to the lavatory and galley are going to be bothersome since you are dealing with noises, smells, people queueing to use the lavatory, and the flight crew opening and closing storage compartments and chatting.”

Sounds terrible, but wait—there’s more. “Many times, the windows are missing at these seats as well,” Duff continues, “and to top it all off, you are going to feel turbulence a bit [more] toward the back of the plane.”

Being in the back also means you’re one of the last ones off the plane—not ideal if you’re trying to make a tight connection.

OK, so the back row is the single worst place to sit on a plane and you should steer clear of it at all costs. But which other seats should you avoid?

All middle seats are unpopular for obvious reasons, and the seats in front of an exit row aren’t ideal either. “These seats usually have limited recline in case the plane has to be evacuated,” Duff explains.

Even the desirable exit row seats, which typically have extra legroom, have a potential downside: “One of the major complaints we read about from [the SeatGuru] community is how the seat nearest to an exit door tends to be colder than surrounding seats,” says Duff. If you value the extra legroom the exit row typically offers, pack a pashmina or fleece to keep warm.

When considering a bulkhead seat, keep in mind that you won’t have storage under the seat in front of you, which can be inconvenient if you like easy access to personal items like travel kits or over-the-counter medications. You should also be aware that bulkhead seats tend to be popular with babies and their parents, as they’re an ideal spot for bassinets.

Don’t use your airline or booking site’s seat map as your only resource when choosing where to sit. SeatGuru’s detailed aircraft cabin plans flag seats with potential problems such as limited recline, proximity to galleys and/or lavatories, misaligned or missing windows, and reduced seat width. The site also highlights seats that are particularly desirable for one reason or another, such as extra legroom or storage space. As a bonus, you can read reviews and look at pictures from previous flyers who’ve had the seat you’re considering.

Once you’ve figured out the seats you want—and the ones you don’t—it’s time to make your choice. You can usually select your seat at the time of booking or when you check in, though you’ll have more options if you make your choice earlier in the process.

Many airlines charge extra for the most in-demand seats (such as exit rows or seats with extra legroom), while others make you pay a fee for any seat selection at all. In these cases, the question becomes how much it’s worth to you to claim the seat you want.

“We understand that travelers want to save money on their flight and be comfortable at the same time, and sometimes that [means] you have to pay a bit extra for that comfort,” says Duff. “A lot of the flying experience is out of your control, so why not make sure that you are able to control one thing?”

Keep in mind that choosing your seat in advance is not an ironclad guarantee that you’ll get to sit there. Most airlines’ contracts of carriage permit them to change seat assignments if necessary, and maintenance issues or schedule disruptions could force the carrier to substitute a new plane with a different seat layout. If this happens and you’re unhappy with your new seat assignment, speak with a gate agent as soon as possible and politely ask which alternatives are available.

Note, too, that if you check in late or show up to your gate at the last minute, the airline might assume you’re not coming and give your seat away to someone else. To prevent this, check in online up to 24 hours in advance and give yourself plenty of time to get to the airport.