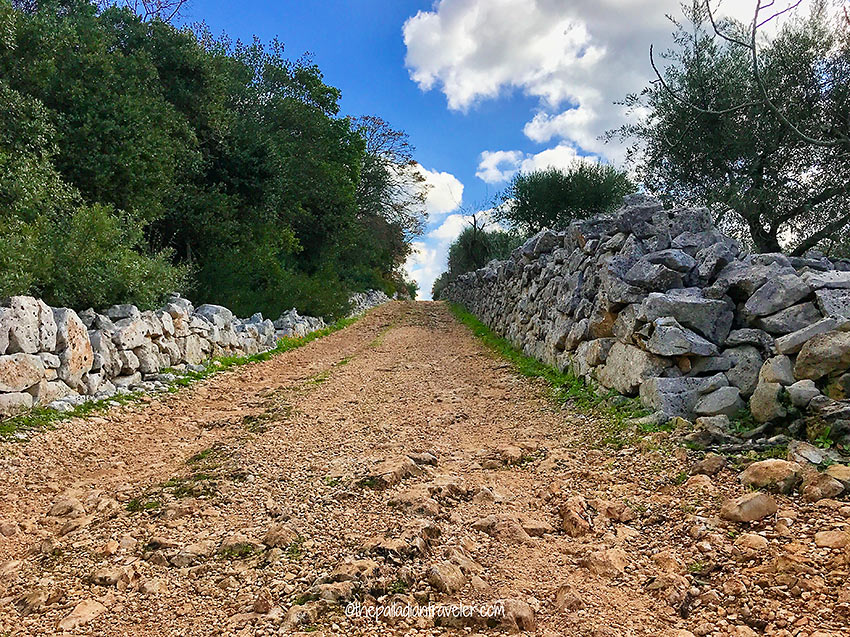 I live atop a wind-swept hill just a few winding, country kilometers outside of Ostuni, la Città Bianca (the White City), in the verdant Valle d’Itria of the Alto Salento (Upper Salento), a sub-region of Puglia in southeastern Italy.

Together with my Irish wife, Orna, we built Villa Allegra, our little bright-white house with Santorini-blue shutters, bookended by two groves of young, promising olive trees, almost two-and-a-half years ago. 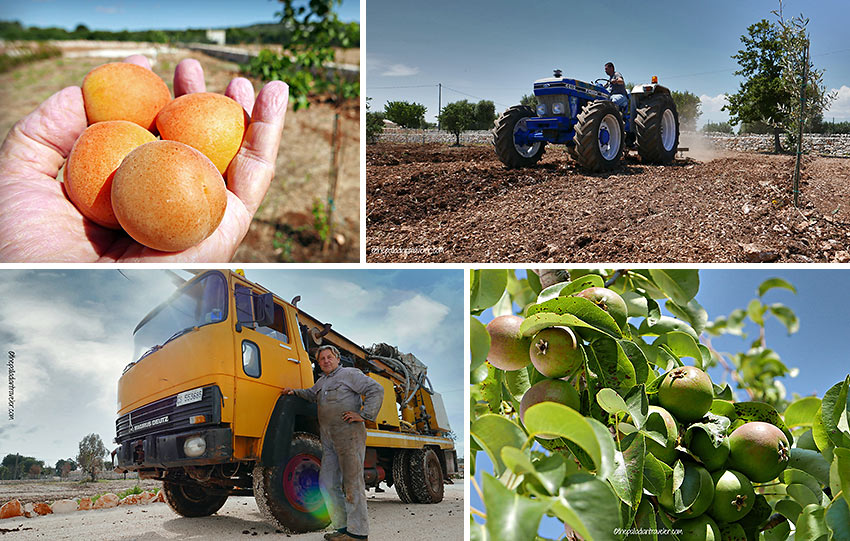 As lo staff (the staff), I’m charged with pulling and strimming weeds, rototilling, irrigating, pruning and fertilizing all the plant life, mowing the grass, and, well, tending to just about everything that’s not under the roof. Occasionally, I seek professional help because, in the words of Orna, I’m the “reluctant olive farmer.” 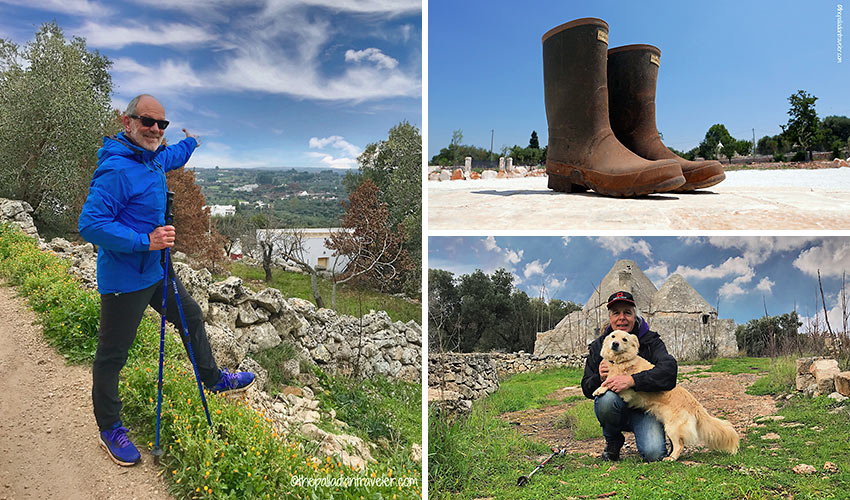 When not occupied with all the agrarian chores, which is not often, I like to put away my wellies and lace up my hiking boots and go for long treks around my quiet-as-a-mouse ‘hood with my neighbor Bob Van, aka “The Trullo Hunter,” and Orsino, his four-legged friend and, quite frankly, the best darn dog on the planet. 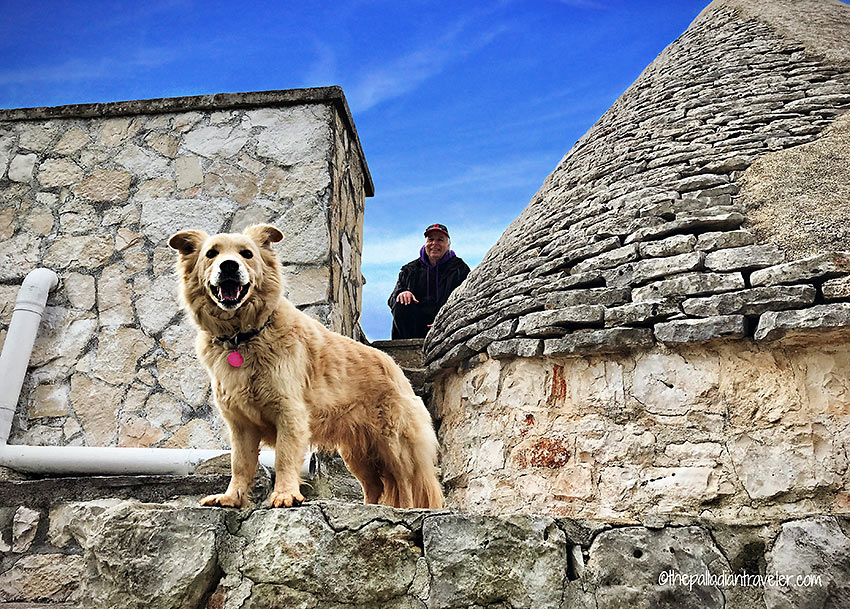 Even before I arrive at the front gate, Orsino is already whimpering, jumping up and down and wagging his tail like there’s no tomorrow. Evidently, his canine sensors are signaling that it’s time for walkies. 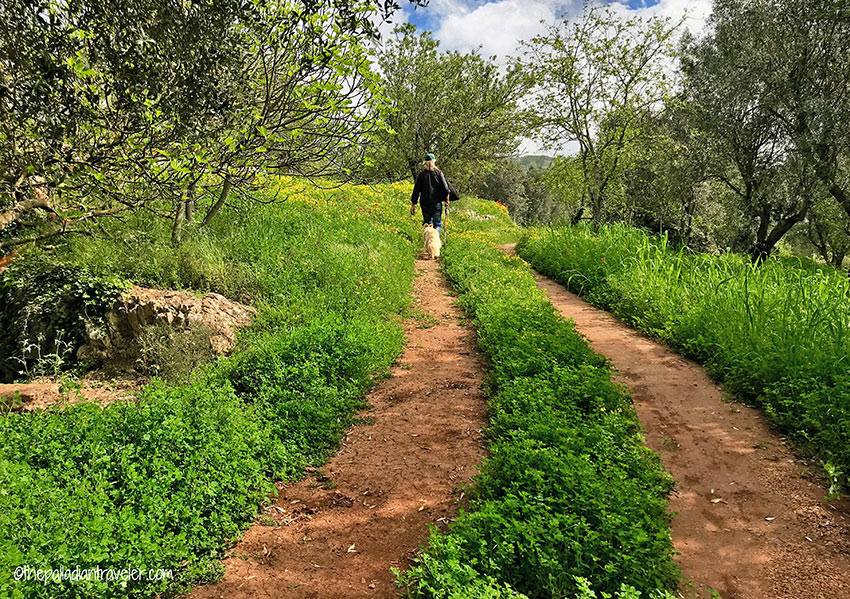 Bob’s been living in our neck-of-the-woods way longer than me, and knows all of the trails, forks, bends and every red-earth path that you won’t find on a map. In short, he knows the terrain like the back of his hand. He’s a natural trailblazer and leads the way under the Pugliese blue whenever the three of us step out on our self-proclaimed Van-Weber Expedition around the undulating green groves, vineyards and orchards — where we inevitably stop, if no one is looking, to have a degustazione (little taste) just to see how the seasonal fruits, nuts and berries are maturing — in our off-the-grid corner of the Valle d’Itria. 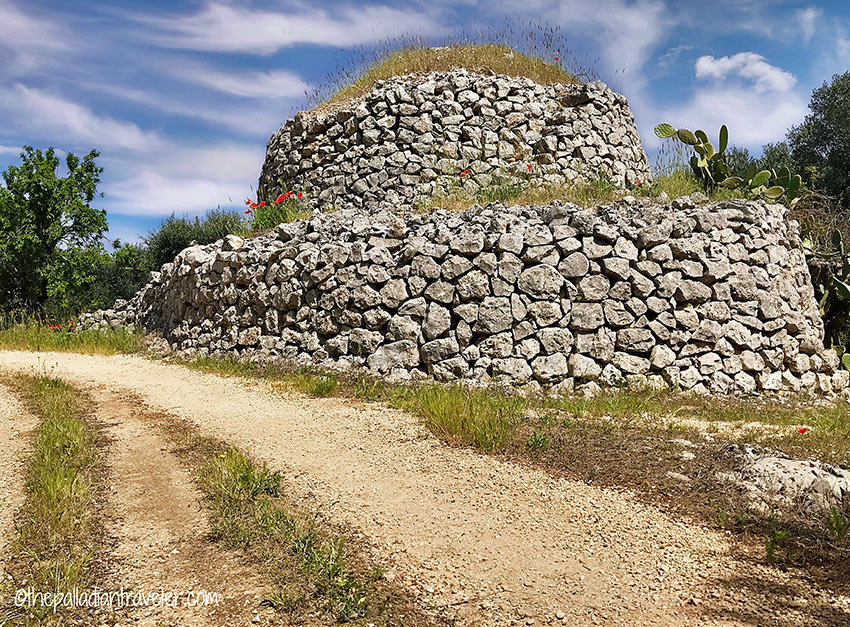 We’ve been trekking and foraging together going on two years now, about the same amount of time that it took the historic Lewis and Clark Expedition (1804-1806) to discover a route to the Pacific Northwest of the United States and return safely to the starting point along the banks of the Mississippi River in St. Louis, MO, my hometown. 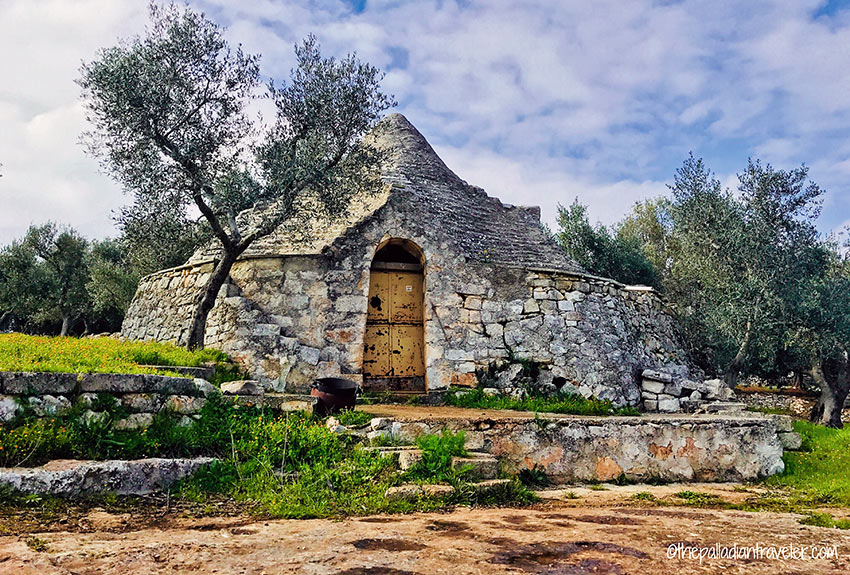 To give the Van-Weber Expedition a bit of purpose and structure, we always make it a point to go in search of abandoned trulli (trullo is singular), those iconic, centuries-old, dry stone huts with conical roofs and pajaru, the flattop or oval roof versions, that dot the rural landscape around our slice of paradise. 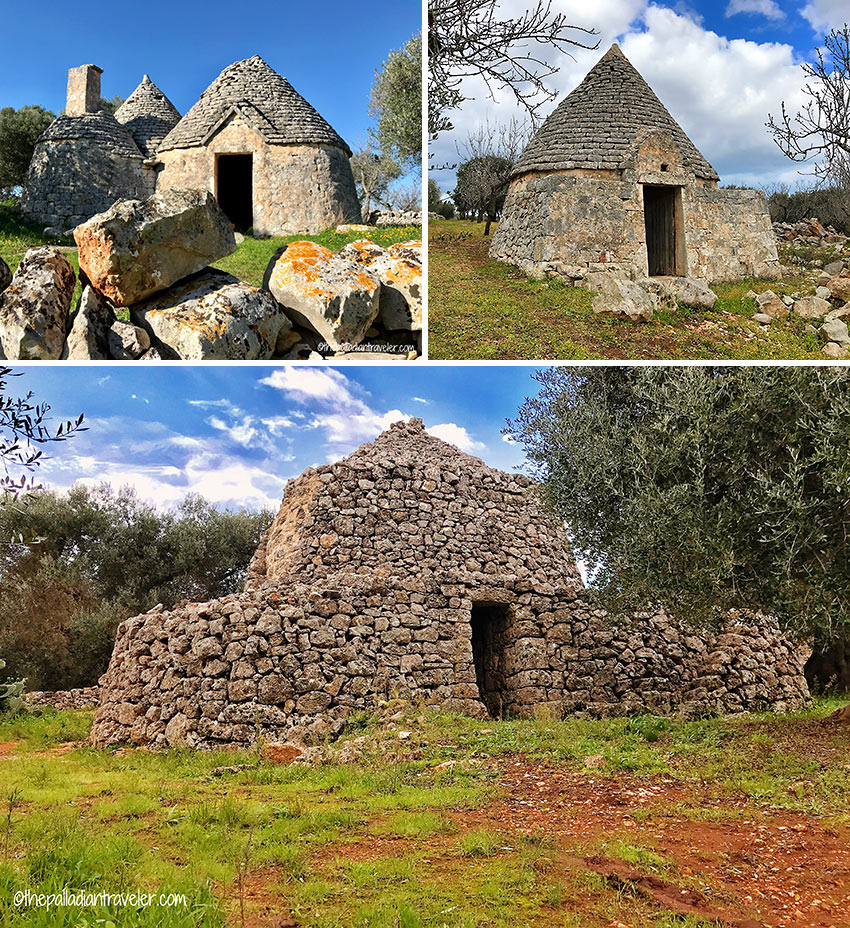 According to some archeological experts, the trullo is believed to be a direct descendant of the Greek thólos (dome, or cupola in Italian), a beehive-shaped burial tomb of the Late Bronze Age that was, over time, modified into dry-wall constructed stone dwellings that sprung up around the Mediterranean. These dome-shaped abodes gained a foothold in Italy when the Greeks came ashore and stayed a spell in Puglia. The trulli of the Valle d’Itria have been confirmed to date back only to the mid 14th Century. 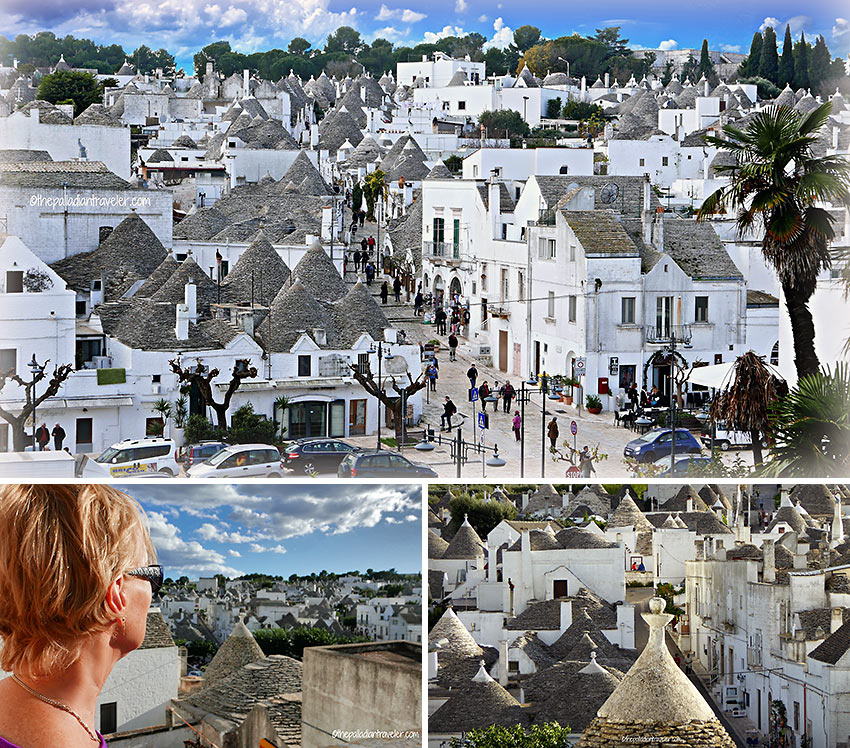 Not as neat and orderly as the 1,500 fully-restored trulli found in nearby tourist-friendly Alberobello, a UNESCO World Heritage Site and ground zero of the so-called “Valley of the Trulli,” our local, dry-wall limestone abodes — no mortar was used in the building of these original trulli nor their flat or oval-roofed cousins — are oftentimes hidden in plain sight, abandoned and pretty much decrepit. You just have to occasionally do a bit of bushwhacking to find them, and find them we do. 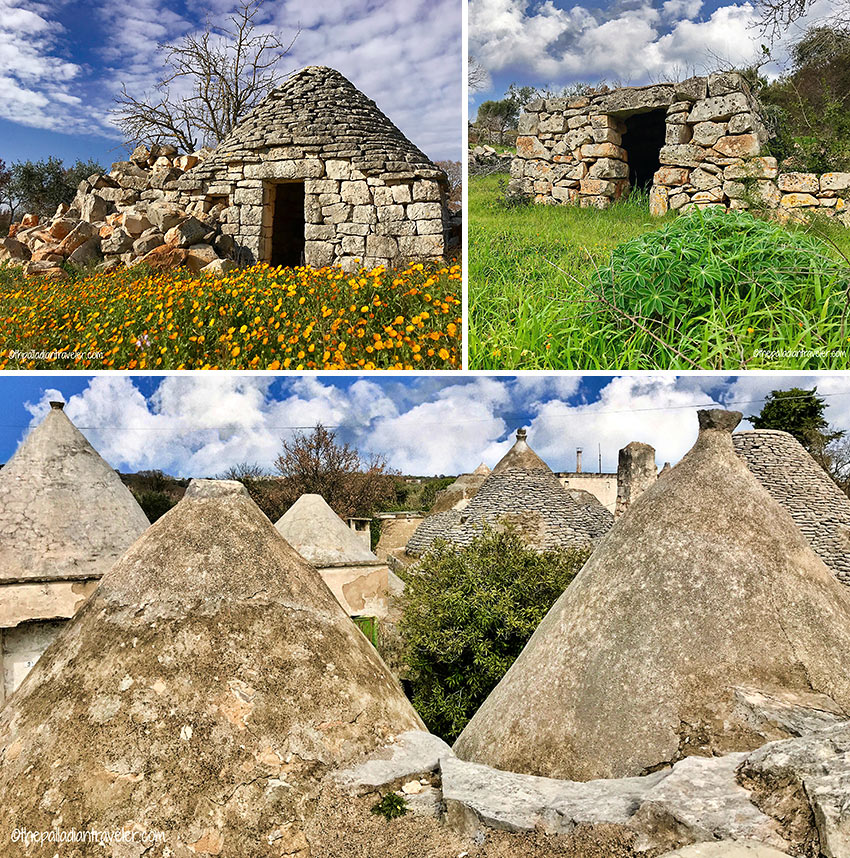 I’ve pretty much documented and catalogued each and every one that we’ve encountered thus far. I’d take along my drone to enhance the visual portfolio, but GPS tracking, for the moment, is a bit sketchy out here far from the madding crowd. 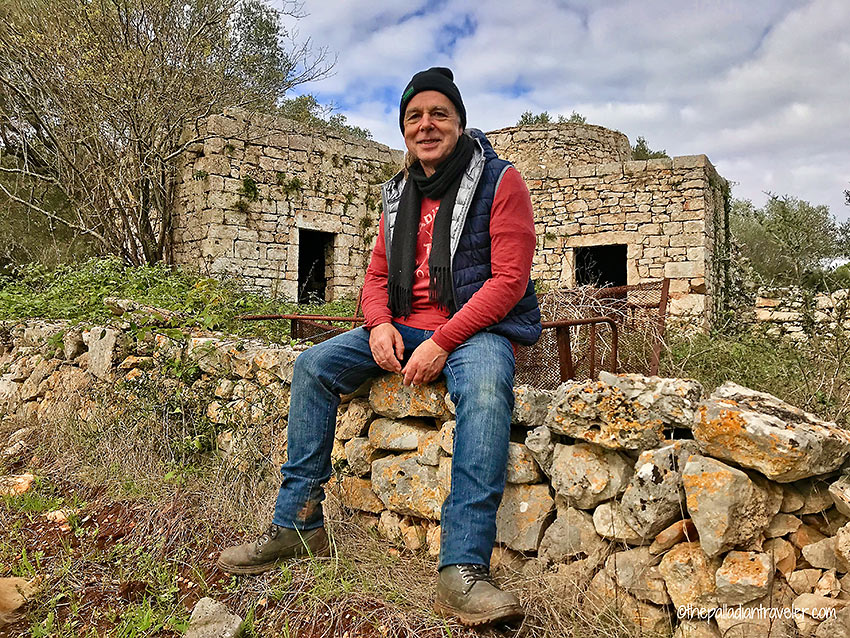 Bob’s a chatty guy and great company. Whenever we encounter another human being along the way, usually a farmer working the land whose property we’re crossing, we stop dead in our tracks, excuse the intrusion and have a chat. Initially, we’re mistaken for tourists (Bob’s a Belgian from the Flemish side, I’m a Yank) who’ve lost their way, but once we identify ourselves as year-round residents living nearby, barriers drop, smiles awaken and lively conversations with associated hand gestures ensue. 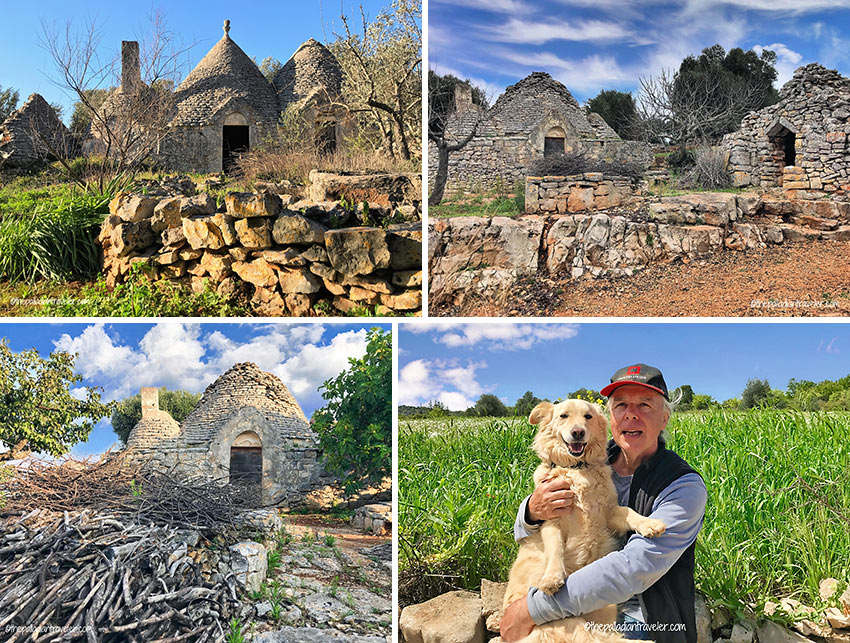 With loads of trails yet to be marked, and with the expert assistance of Bob “The Trullo Hunter” and Orsino, his faithful companion, I’m sure the Van-Weber Expedition’s visual collection of abandoned abodes around the Valle d’Itria will continue to expand.

How to get there: Fly or train to Bari then rent a car and explore the communities of the Valle d’Itria: Alberobello, Ceglie Messapica, Cisternino, Locorotondo, Martina Franca and Ostuni, along with the nearby coastal towns of Monopoli and Polignano a Mare.

Where to stay: Ostuni Palace Hotel & Spa, in the heart of the city at Corso Vittorio Emanuele II, 218