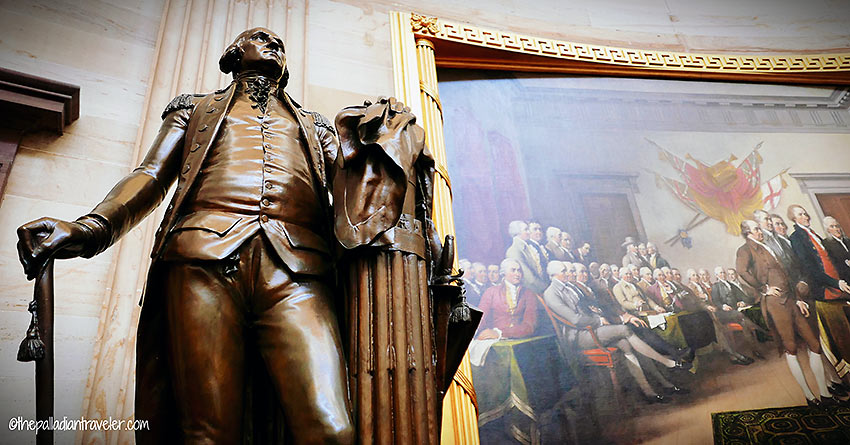 Despite his dream of building a capital city along the banks of the Potomac River and unlike the real estate cliché “George Washington slept here,” America’s first president never once laid his head down on a pillow within the District of Columbia, aka Washington, DC. The closest he ever got was a good night’s sleep at his homestead in nearby Mount Vernon, VA. 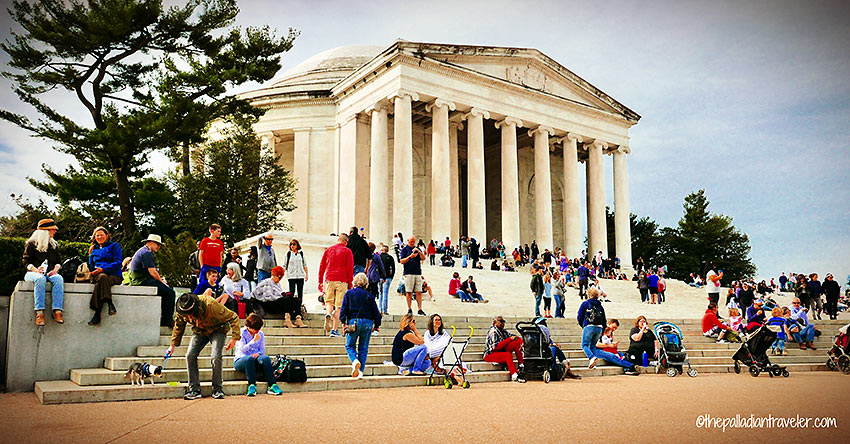 Some 228 years later, our nation’s capital welcomes more than 22 million visitors a year. A world-class city embedded with a vibrant history, spectacular monuments, outstanding museums, plentiful parks, lush gardens and exceptional chef-driven cuisine, Washington, DC is well worth a visit. But, don’t just take my word for it, join me as I take the lens cap off and document this monumental city originally planned by Pierre L’Enfant. 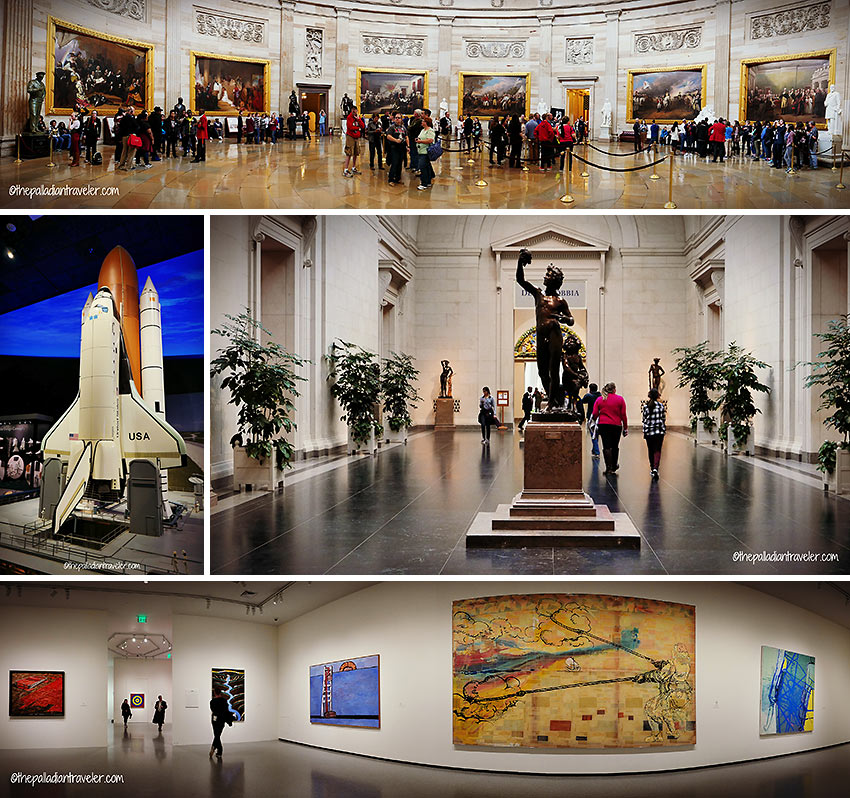 For starters, there’s the Smithsonian Institution, a collection of 19 massive, artifacts-filled museums and galleries and the National Zoo, many standing shoulder-to-shoulder on either side of the two-mile long National Mall, “America’s front yard.” Art, history — natural and chronicled — science, and red-white-and-blue ingenuity to rocket into space, are all on display inside these titanic buildings. And, the best part? Entry is absolutely free for we, the people. 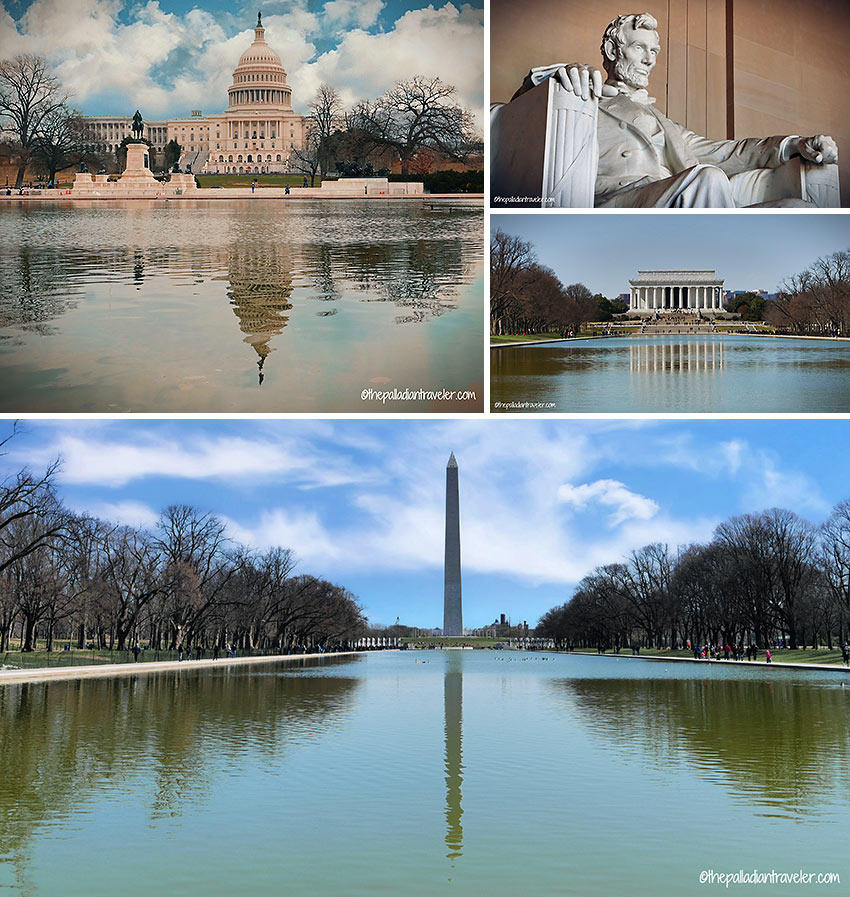 Bookending the Mall is the Capitol Building at the eastern end, where the legislative branches of government apply their checks and balances atop old Jenkins’ Hill, and the awe-inspiring Lincoln Memorial, where Honest Abe sits in deep contemplation at the western edge along the banks of the Potomac. And, smack dab in the middle of it all stands the Washington Monument, a 555-foot marble obelisk — the tallest structure in the District — honoring the “Father of His Country” that’s encircled by 56 American flags, one for each state along with the five territories and the District of Columbia. 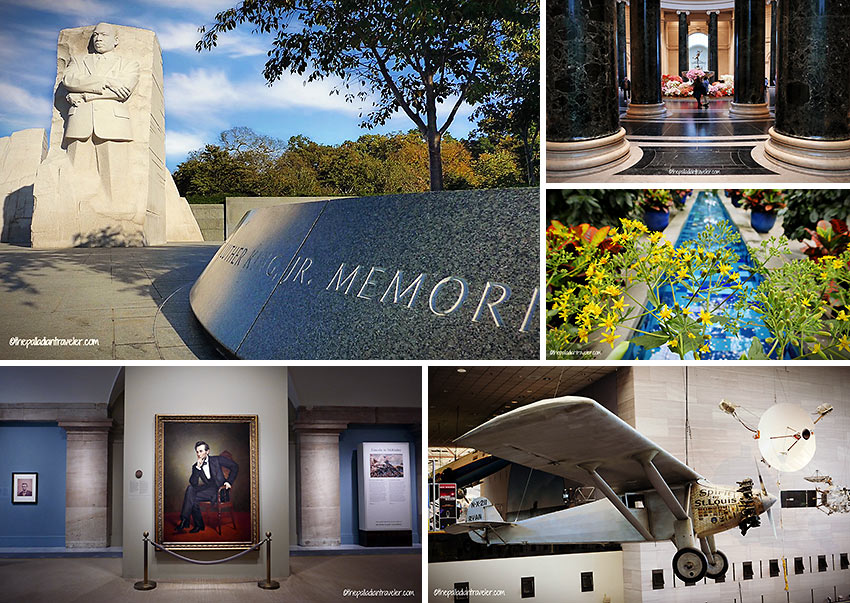 Our historical walk around the Mall also includes a bevy of memorials: Jefferson, Vietnam and Korean War Veterans, Martin Luther King, Jr., FDR and World War II. Join the lengthy queue to get inside the National Archives to view John Hancock’s John Hancock on the Declaration of Independence, along with the Constitution of the United States and the Bill of Rights. Book way in advance for access to the National Museum of African American History and Culture, the newest venue on the Mall. Spend an entire day exploring the myriad of exhibitions at the National Galleries of Art and Portrait. Reach for the sky and the stars beyond at the National Air and Space Museum. And, stop long enough to smell the plant life inside the US Botanic Garden. 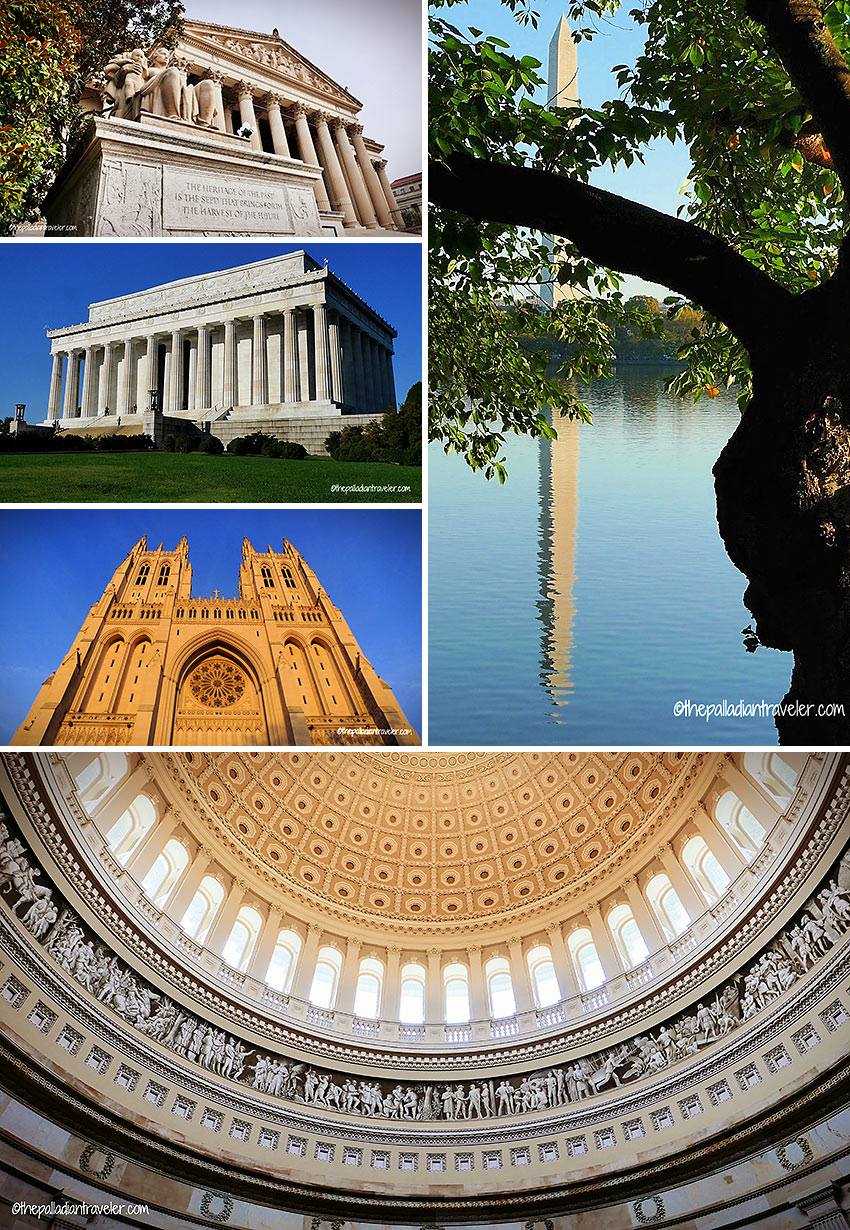 The United States is a cultural melting pot and its capital reflects the nation’s sea-to-shining-sea international roots. Heavily influenced by Egyptian, Greek, Roman, medieval European and 19th-century French architecture, wherever you look, especially up, you’ll see an abundance of tall columns, massive domes and the occasional flying buttress. From the White House to the U.S. Capitol, from the Washington Monument to the Library of Congress, from Union Station to the National Cathedral, a simple stroll around architecturally impressive DC alone is well worth the airfare. Right? 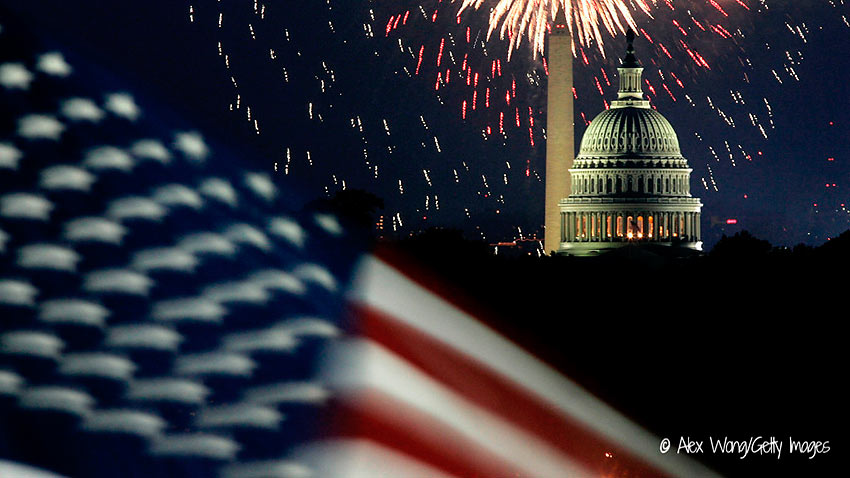 The District’s a showcase of American performance arts and is home to such iconic venues as the National Theatre and the Kennedy Center for the Performing Arts.

In the early 20th century, jazz music had a dizzying effect here as DC natives, like Duke Ellington, played the night away on stages up and down famed U Street. Years later, homegrown go-go, a blend of funk, R&B and hip-hop set the beat around clubs and out on the street.

And, let’s not forget that John Philip Souza came marching down Pennsylvania Avenue at the dawn of the 1900s leading the Marine Corps Band, the oldest musical group in the US. Today, Souza’s iconic march music is one of the highlights at the annual A Capitol Fourth, the national Independence Day celebration that unfolds at twilight on the West Lawn of Capitol Hill. 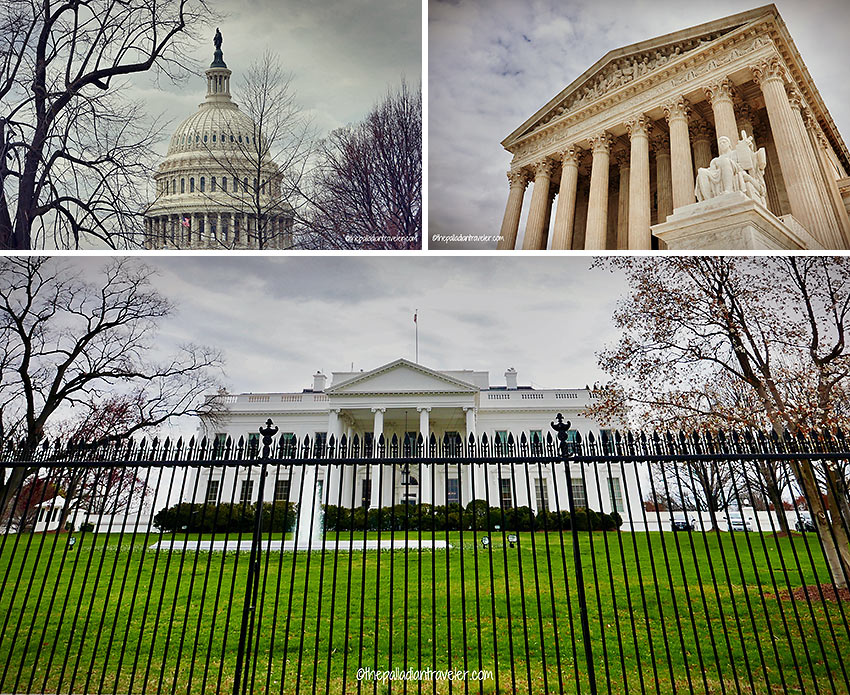 The White House, Congress and the Supreme Court, the three pillars of the US government, all punch their clocks here, while the Pentagon, the State Department, the World Bank and embassies from almost every corner of the globe float around their orbit. Power, those that carry it and those eager to wrestle it away, is why DC emits such a 24/7/365 buzz. Can you feel it? 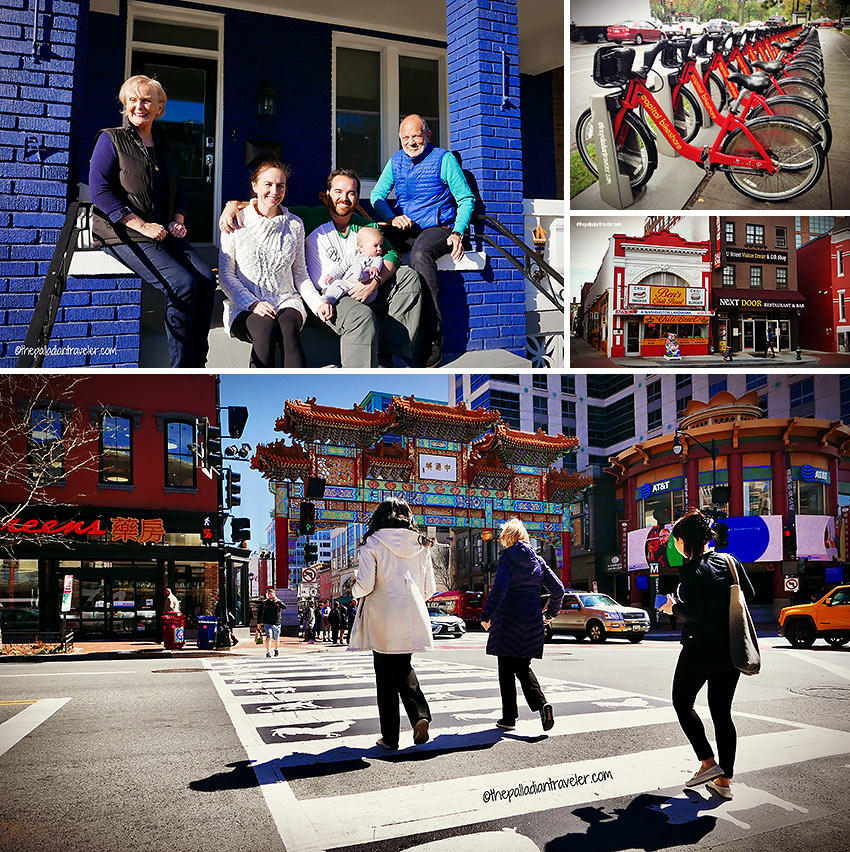 Washingtonians, all 700,000+ of them, know full well the difference between the city itself and the District of Columbia, aka “inside the beltway.”

Beyond the high profile attractions, the politics, the leaks, the lobbying and the “fake news,” the city, all 68 square miles of it, is made up of small, distinctive neighborhoods where normal folk live and breathe. Here, restaurants, cafes, bars and nightclubs are hopping; Ubers are hailed and bicycles and electric scooters are shared via smartphone apps, and one of the cleanest metro systems in the world moves the populace quickly; and, where friends share a laugh, like my DC-based fam, on colorful row-house front porches or on terraces atop apartment complexes with fab views of their fair city spread out below. 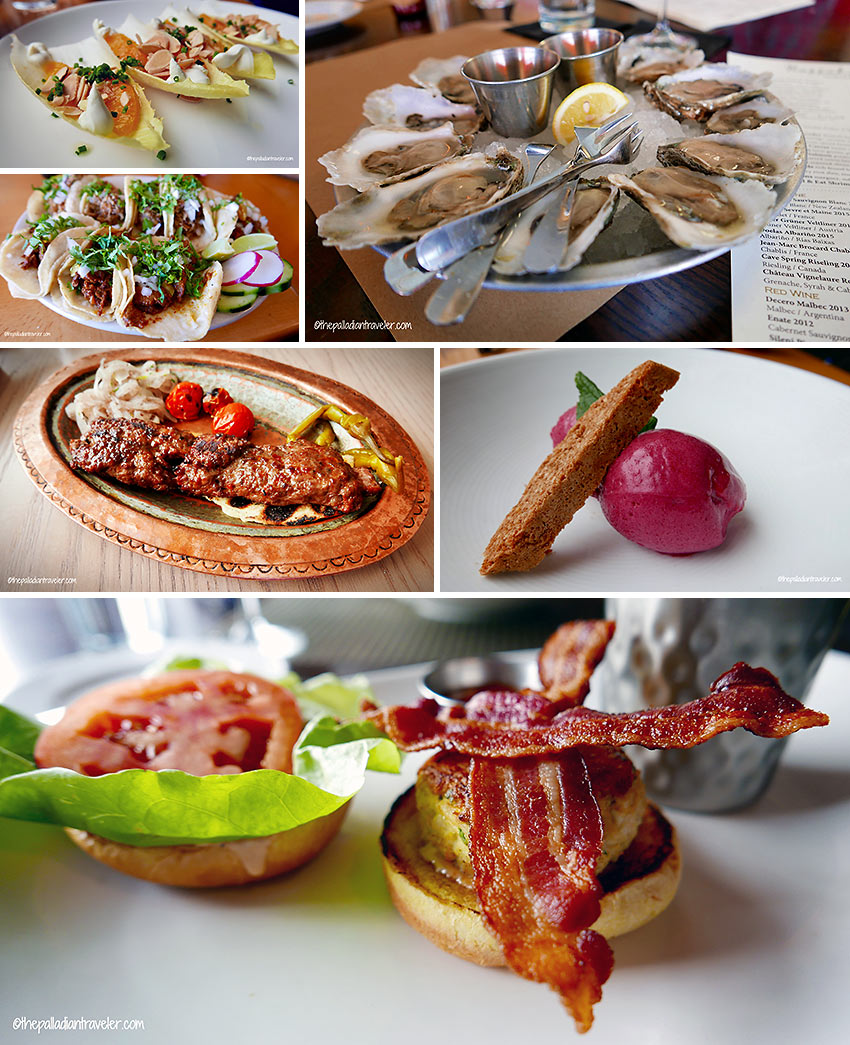 While we’re here, let’s grab some cutlery and tuck in to one of the country’s hottest food scenes. The District is a can’t-miss epicurean destination touted by the likes of Bon Appétit, the Michelin Guide and Zagat, and where celebrity chefs like José Andrés, Tim Ma and Marjorie Meek-Bradley conjure up their culinary wizardry.

From food magazine-worthy dishes created and plated at coveted tables around Penn Quarter, to local favorite half-smokes served at a 24-hour diner up in Adams Morgan, to one-stop grazing at foodie mecca Union Market, just about every kitchen on the planet is represented within DC.

Regardless of your crave, one thing’s for certain: it’s all delectable no matter where you dine. Uh, I’ll have the Maryland crab cake sandwich topped with crispy bacon, please. 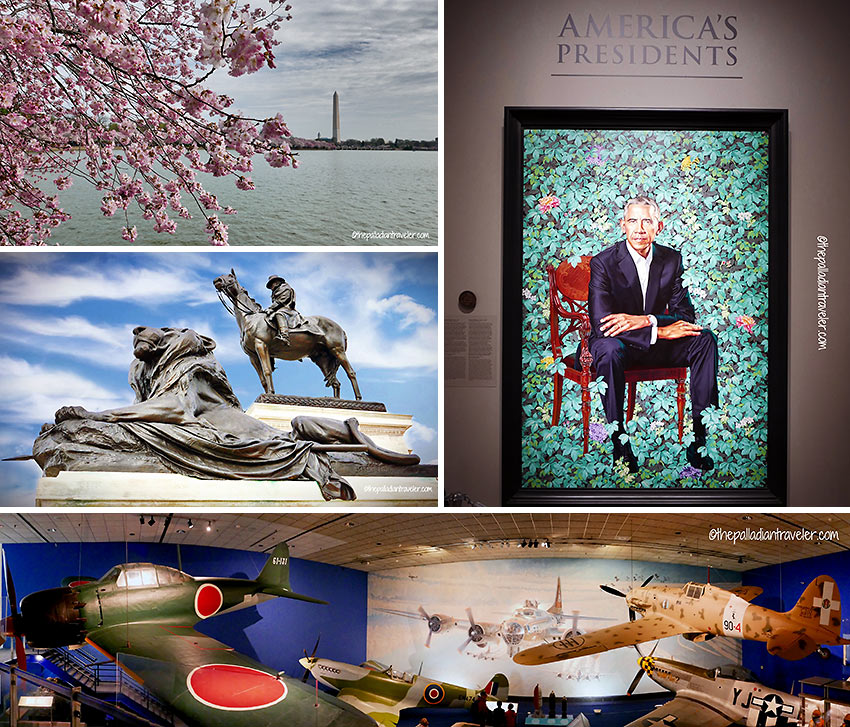 With loads of attractions and activities for every visitor, budget-minded and value-added, Washington, DC is teeming with a good-time vibe. Affording unmatched free access to museums, monuments and memorials and one-of-a-kind events, like the National Cherry Blossom Festival, not to mention five pro sports teams — Redskins, Nationals, Wizards, Capitals and DC United — the District is in a class all by itself. 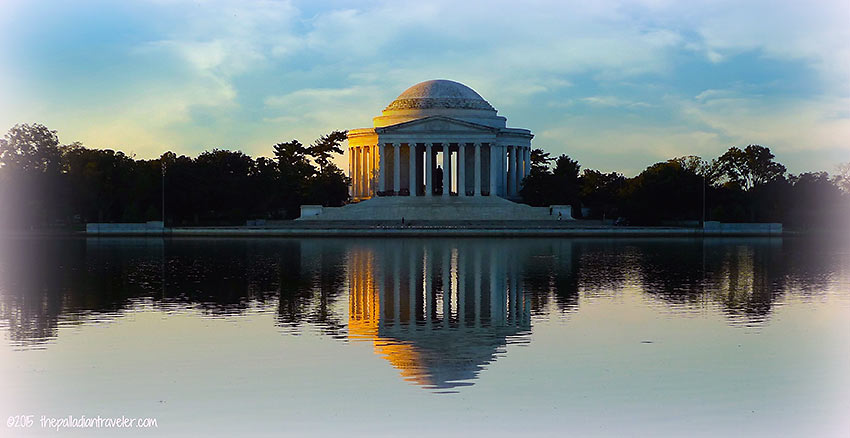 Washington, DC, America’s monumental city that our first commander-in-chief envisioned, is all grown up now. I’m just happy that you let me show you around.

For 85 days, between March and June of this year, my wife, Orna O’Reilly, aka Chef Double …