Home Uncategorized The Visitor’s Confusion About the Trump Administration 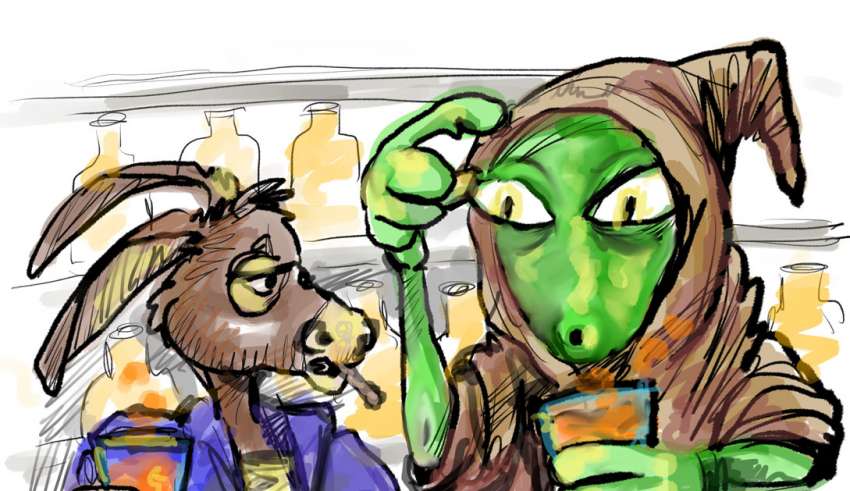 An alien asks how it is possible for someone so unqualified to be the leader of the world.
Why is Trump the president?

I was at my local watering hole having a round at the bar. An unusual fellow came up and sat beside me. After a little while, he engaged me in conversation. Right off the bat, I noticed that he didn’t quite look like anyone I had ever seen in all my years here on earth. It turns out that he was visiting from the next solar system over. He related how earth is such an amazing planet in the universe that it merited visitation and exploration. Understandably, he did not have unlimited time to go everywhere, chose the United States as his first and most important stop due to its diversity of citizens, climates, natural beauty, resources, immense power financially and more.

The visitor introduced himself as “Marty,” saying that I would have a very difficult time pronouncing his birth name. Marty asked about me, my life, and my interests. Then Marty brought up our democratic system of government, which he explained was a lot like his on his planet.

Marty shared that what had him most confused was how the person in charge of our government, the president, was put into office not by a majority; he not having any political experience at all. Marty went on to say that would never happen on his planet. Marty then asked how it is possible that the President of the United States operates in the job, spending so little time actually doing the necessary work. Marty clearly knew a lot about Donald  Trump, including his obsession to play golf and talk about how great he was as a negotiator and so on, his goals for our nation seemingly imprudent. Apparently, they have a game similar to golf on Marty’s planet and their leader usually plays, but never to the extent that Trump does as there is so much work for their leader to attend to.

Further, Marty had observed that Trump had had more departures and firings in the first year or so of his term; that there seemed to be great instability to his leadership. The visitor could not understand why Trump was destroying relations with close allies that had been built literally over centuries. If Trump possessed so much power then why was he such a bully? Why does he alienate himself from those he needs for support? Why does he blame everyone else for his shortcomings? How could someone exist as the head of anything and be so ineffectual?  None of it made any sense to Marty.

Being a being from a faraway planet, I assumed that Marty possessed a lot of intellect, his people the ability to travel such distances, which he clearly did. Marty clearly knew his stuff about Trump and the political scene here.

Marty asked how a person in the position that Trump holds find himself in so much political and legal turmoil, scandals and worse; all that so quickly in his time in office. To Marty, it seemed like more bad news, more scandal was landing on the doorstep of the White House nearly daily, and that Trump was not loyal to those he put in positions of responsibility, many of them equally disloyal to him. This was both odd and quite disconcerting to Marty.

The visitor shared that there isn’t a lot of conflict on his planet. He observed that Trump seemed so in support of the leader of another big nation who was a bad actor, who was still in office by brute force. Marty was very concerned why Trump was so chummy with that person as that was the antithesis of what our nation stood for. Marty was clearly struggling with how the head of the United States, a nation built on diversity and immigration, had as its commander a person who fomented such disdain for people of other colors and backgrounds; his treatment of women was just unacceptable in Marty’s entire solar system. And not to my surprise, Marty shared how the leader of his planet never rushes to make a decision and proclamation, making sure to counsel his advisors first.

And if that wasn’t sufficient, Marty noted that so many in our Congress were idly sitting by and allowing it all to continue to unfold. Marty was relieved that we have something called the “independent counsel,” who was clearly looking carefully and deeply into so many troubling issues. Marty shared that when there is a problem such as what we are facing here on his planet they send the bad “actors” to a far off place, effectively removing the “bad apples” from the good bushel. I was impressed by his use of our clichés, relieved to learn that they actually take action to root out the rot.

I had enjoyed my encounter with this friendly visitor immensely, no doubt because I had never met a creature from another planet, much less another solar system. Marty’s concerns and observations were of immense value as he was coming at them without any earthly bias.

Before I excused myself to go about my business in order to see what the latest news was coming from the White House and the capital, Marty asked me one more question: “What’s with the orange face, the face puckering, and the so small hands?”

When the Trump presidency is finally put away, the Trump Presidential Library that will be…