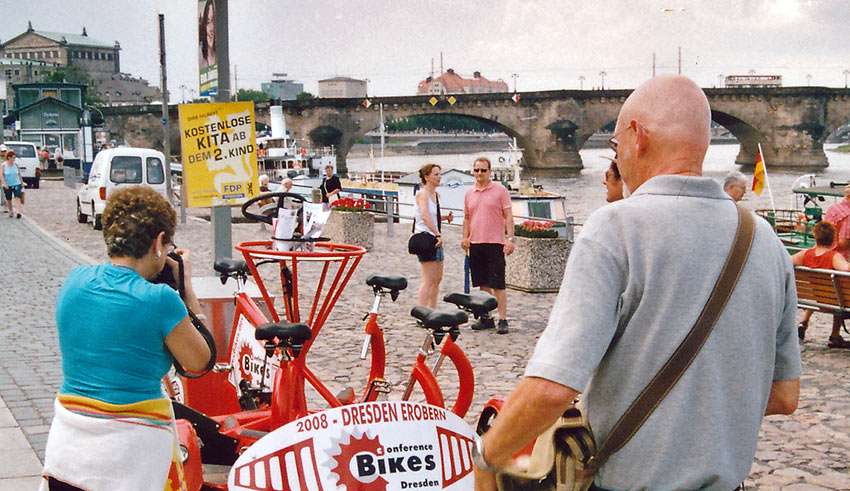 T Boy journalist John Clayton takes a photo in Dresden, Germany, of two fellow travel writers' who, like him, are fascinated by the "Bike for 7" they've been asked to sample.

Have you ever thought about the attention getting factors involved in riding a bicycle? Probably not, but while most people know about “Bicycles Built For Two,” what about one built for seven? Now there’s an attention getting device for a fun way to start a vacation or hey, even a business meeting. It’s not only one of the really nifty “Things” to do in several cities around Europe, but by riding it, YOU become a tourist attraction. This amazing bike does that by having everyone sit in a ring aboard a bike that’s circular in shape. If this sounds like a mathematical conundrum, 7 people can ride such a bike, have enormous fun while doing it, and become a tourist temptation in their own right – as I found out when some other travel journalists and I zoomed around Dresden and then again in Munich at the leisurely pace of 5 to 10 mph. If you’re planning any sort of business function or event, this is a dynamic ice breaker!

This very ingenious (should I call it an apparatus?) comes from the inventive mind of Eric Staller, an American living in Amsterdam, Holland. Four years in development, this innovative means of travel has six people pedaling while one steers the contraption. Each bike is hand crafted in Germany and weighs in at 400 pounds. Asking the owner of our bike tour in Dresden what each unit cost, he took my breath away by saying it was more than a small car – around 9,500 Euros, or about $12,750.   I Googled “Cost of Conference Bikes” and saw a wide range of prices. The company that makes these incredible machines only produces them in attention getting red.

Trying to describe to one’s friends what it’s like to actually ride this bike for seven, is something of a challenge – and the description I liked best is the one given to us by our Munich guide. “It’s like walking while driving or, conversely, driving while walking.” Right! The bike has 4 wheels, and 7 comfortable seats situated around a circular handlebar that everyone grasps for stability while the driver, and in our case our guide, sits in the back facing forward and does the actual steering – we provided the pedal and motion power.

I must own up to the fact that I liked “the intense interest getting aspect” of riding these odd looking, but very comfortable, machines. Because they’re so, well, unique, when you start pedaling down the streets and highways of the city you’re in, everyone (well, just about everyone!) stops to stare and then gives you the Hi Five sign of happiness. In short, you and your friends are a tourist attraction in your own right!

Their popularity has skyrocketed, as they’re now enjoyed in 16 countries. It’s a tour bike in Berlin, Moscow and Budapest. In San Diego it’s used as a tool for corporate team building, and (now get this clever idea) a way for blind people to bike in Dublin. It’s in theme parks in Japan and Spain, and how about this, in Jerusalem it’s on display at the Science Museum, and in France at the “Pavilion des Sciences.” Whatever you call it – tool, vehicle, bike – it’s a super way to literally “bring folks together.”

Consider: Use it to be a huge hit with your business colleagues, or, as a unique way to bring in new clients that’ll give you a gigantic head start over your competition. Check out the Conference Bike website here.

Do YOU believe – really believe – in witches? I mean on October 31st all kinds of crazines…