I guess we’re starting the new year with a bang. A real BANG! with the hit on a terrorist in Iran. Predictably, the politicians are not shy about expressing their opinions. Sadly, the country is more and more divided even on something you would think they should actually agree on. It’s almost automatic — what one side says, the other side always has to disagree.

Some say that we shouldn’t mix politics with religion but last night I was reading Matthew 12 and it just hit me that this is one of the most politically charged passages in the Bible — and it’s as relevant then as it is today. It’s about Jesus vs. the Establishment — Jesus’ miracles (that are obviously good) are condemned and questioned by the Pharisees. Listen to their heated debate:

“Our long established rules demands that you shouldn’t do that!” they said.
“You mean I can’t do this?! *bling!* and Jesus heals a man’s crippled hands.

“Well, we demand more proof than just miracles!” they retort.
“I already sent you lots of ’em. Remember Jonah and the whale? If you still don’t get it now, what’s the point in showing you more?” Jesus says.

“Lookie here! Our ‘fact-checkers’ say these guys are your Mom and brothers! How can you be the Messiah if you come from this ordinary family? Gotcha!” they smirk.
“Nice try diverting the argument. Those are just my earthly family. These guys who believe in me are my true family!” Jesus ends.

Of course this is just a paraphrase of the debate. Read it yourself and pay particular attention to the dynamics and tactics employed. Don’t they sound like today’s politicians?

What has me worried is that America may not survive with all of this internal bickering. I believe there are powerful forces that want to take America and the world down and they have already infiltrated our system.

“any town or family that divides itself into groups which fight each other will fall apart.”
— Matthew 12:25

But through prayer, there is hope. Can’t we grant each other patience and respect? Let’s really listen to the other side. It isn’t a matter of who’s smarter or more informed. Facts don’t matter when you’re up against pride. We all win when we lower our pride. And I say this to myself too and I know it’s hard. 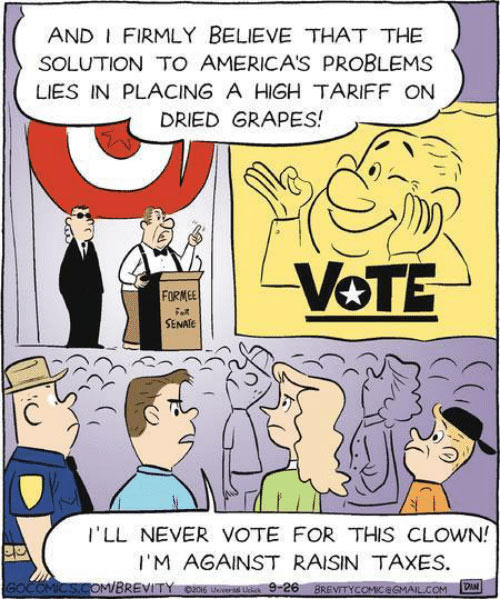 Hard to believe there are millions of drivers out there who do not know how to back up or horizontal park. Here is an invention that can still probably help today. Thanks to Chuck of Whittier for sending this.

Thanks to Don of Kelowna, BC for sharing this adorable bird.