John Clayton is Moving into Podcasts

This one (see link below)  is all about show business, how to succeed (and not!) and how vital it is to ASK in life, and NOT be afraid of rejection.

It is 20 minutes and moves along at a fast clip — it also highlights my meeting on the studio set of the hit TV show “Rawhide,” and its star Clint Eastwood. Who I knew, but I was afraid to ask him the key question – as you’ll hear.

Now wait a minute, what, I mean WHAT is John doing here? 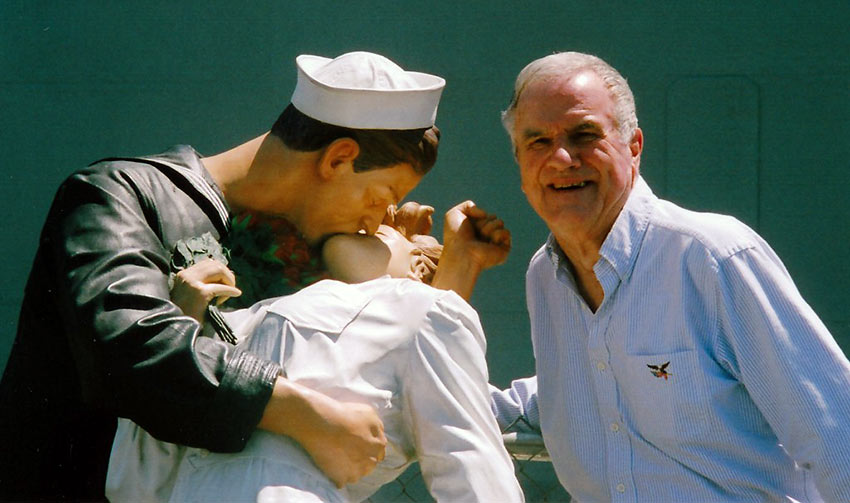 Would you get this close to a sailor kissing a nurse – and in public no less? But if you cast your mind back to the end of WW2, and how that major event was celebrated in Times Square in New York City — there was that very, Very famous photo taken of the above “situation” by a famous LIFE magazine photographer.

This famous couple is now in “model form” and can be seen in front of the mighty USS Iowa — the equally famous WW2 battleship, now a hot tourist attraction in San Pedro, California — and John (because he was not able to be in NYC in 1945) had to get a picture in 2013…

When this picture was taken, we were also doing a video for RP-tv. I hope you like it:

The Red Car normally charges just a dollar for a 6 minute ride but it is running for free all summer. Also, they’re having cupcakes and punch for the Red Car’s 10th birthday Thursday, August 8, 2014 at 6:30 during the port’s Summer Concert series.