First a little history. In 2012, Julie Mason, herself a quilter, introduced the concept to the local quilters’ guild after seeing a Quilt Barn Trail in the Midwest. They rallied behind the idea of bringing grass roots to unexpected places and just a short six years later, 60 quilt barns have emerged throughout the Valley. It took two years and a lot of persuasive efforts to get the right permits and zoning requirements to allow for the 8’X8′ painted wooden blocks representing actual quilt designs to start appearing on barn doors.

The quilt barns represent an agricultural heritage, providing a connection each family has to the quilt and that the quilt has to their history. From inception to installation takes about 6-8 weeks, and the quilters’ guild works closely with the farm owners on design, colors and concept.  A lot of research goes into identifying existing quilt designs which represent what the family wants, and when none exists, an original design must be painted. Many are on farms over a hundred years old, with 10 on Century Farms which not only refer to their age but also the fact that they have been inhabited by one family all that time.

The Hovering Hawks block on the Simpson Century Farm was the first block to go up in 2015, two weeks after the sign ordinance was signed and where, under the watchful eye of owner Beth Hess, all of the quilt blocks are now built, painted and assembled, a very arduous, labor-intensive task fully manned by a dozen very skilled volunteers. Beth’s own choice reflects an old quilt design from the Oregon Trail that also pays homage to the many hawks that inhabit their land. 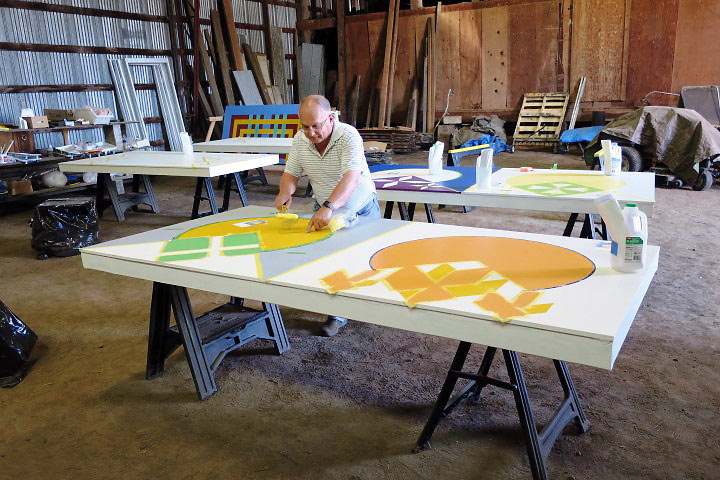 Reasons different farmers choose a particular pattern range from having a favorite quilt, vintage or current, to a favorite farm crop or animal, personal family history, either current or historic, or a kinship to a sunset or other natural vista or just some intrinsically appealing color combination. The quilt blocks are as diverse as the farms and farmers to which they belong.

Currently, the quilt barns have been divided among four routes throughout Tualatin Valley – and the mapping out of directions is still in process. I mainly traveled the route through Forest Grove, visiting a wide variety of visually delightful, colorful and meaningful quilt barn participants from a windmill paying tribute to the farm owner’s Dutch heritage to a covered wagon celebrating the family’s grandfather who traveled over the treacherous Oregon Trail. Along the rural routes are vineyards and fruit orchards as plentiful throughout the countryside as Starbucks are in the cities.  Even if not following a specific route, an eagle eye is likely to spot a randomly decorated barn door peeking out from among the more plentiful vineyards.

Among the farms and quilt blocks we visited were the Foerlinger Farm which replicates the first quilt block the owner had made with her grandmother. The Blooming Farm, built in 1882, sports a sunflower block that commemorates their favorite flower that grows in their own garden. The Walta Farm displays a classic block of green and yellow that colorfully suggests the sweet corn and green beans grown on the farm. The 1930’s barn on the Rohrer property honors the six tribes of Native Americans who made their home near the site.

And in case you tire a bit of gawking at pretty barn doors, stop at Plum Hill whose block shares its home with a vineyard. So, of course, wine tastings are in order. The quilt block itself is a traditional pattern often used in quilts given as wedding gifts and aptly named Double Wedding Ring, a favorite of the farm’s co-owner Juanita, a quilter herself. The wines, however, proved a favorite of mine, especially the white made from the Schonburger grape – and Plum Hill is the only winery in the U.S. to grow it. In addition to wines, the property is extremely pet-friendly – dogs are everywhere – with a shrine to Juanita’s yellow Lab named Ghost. Her passing is noted in a sign announcing a recent “Yappy Hour” memorial celebration. Dog quotes vie with wine quotes throughout the shop: “Love is a fur-legged word….”

As travel writers, we’ve been on commercial wine-making tours around the world and I cringed at the thought of another. But was I glad we took Juanita up on her offer. This was an intimate, hands-on personal exposure to wine-making at its most primitive level. Old-school hardly adequately defines it. Un-mechanized, labor-of love intensive, we were literally one with the grapes at multiple levels of fermentation, pressing, aging and bottling. Everything done by hand. Plum Hill produces 2500 cases a year while its neighbor produces 90,000 – a fairly different process, I suspect…

But time now to visit some more quilt blocks. The afore-mentioned great-grandfather of the owner of the Spiesschaert Farm came to Oregon from Illinois via the tortuous Oregon Trail in 1884. The 100-year-old farm houses the original Conestoga wagon that carried 3 adults and 7 children across the trail and the block – a picture of the wagon – commemorates that history. And the beautiful blue star design at the L Bar T Bison Ranch celebrates quilts developed by women who also crossed the Oregon Trail.

Driving away from Tualatin Valley, I was not surprised to see other Barn Quilts peeking through the trees that beckon – no, practically beg – us to drive by if only just for a moment. For more information, visit the Quilt Barn Trail site.

It's a town time forgot – or maybe it just refused to move forward. Serene and unpretentio…