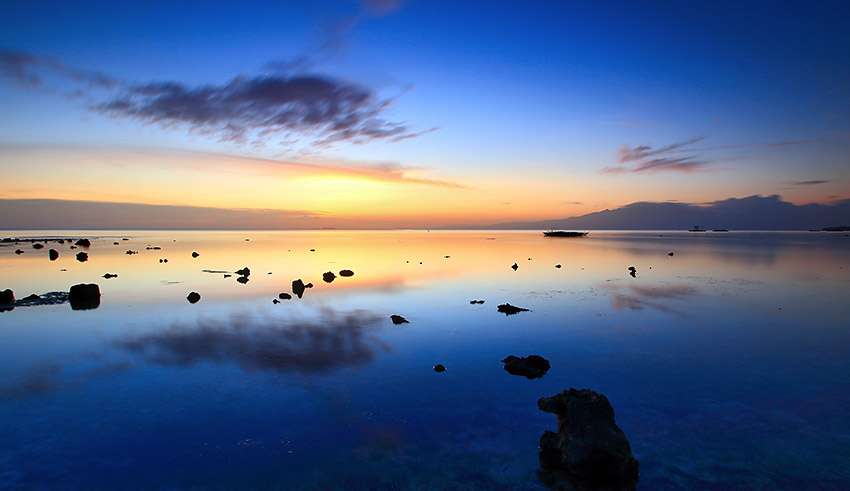 Spanish colonizers christened it Isla del Fuego (Island of Fire) for the glow given off by swarms of fireflies at night. In the past century however, the island province of Siquijor (pronounced See-kwi-hor) in the Philippines has gained a reputation for its folk healers. More notoriously, stories about sorcery, witchcraft and spirit beings have added to its mystique and kept us away from the island. That was until pictures of its pristine natural beauty began popping up online.

Seven years ago we got on a flight to Dumaguete City (Doo-mah-ge-teh) down south and unto a ferry bound for the enigmatic island. Its laid-back charm, friendly people, postcard-perfect white sand beaches, turquoise waters, old churches, cool waterfalls and fiery sunsets overcame whatever trepidations we had about touring Siquijor. It was such an enjoyable experience that we went back for a second visit just before the Covid pandemic hit.

Siquijor wasn’t as popular when we first toured the province as it is now – to Filipinos at least. When we first set foot on the island and made our way to a resort on quiet Sandugan Beach in Larena (Lah-re-nah) it seemed we were the only Filipino visitors. Most of the other guests were Americans and Europeans. It was obvious that stories about the supernatural in Siquijor were scaring off local tourists. A friend who had visited the island even warned us not to look at local residents in the eyes – a long-held belief for dealing with sorcerers.

The beauty of the island’s pristine attractions, however, trumped over any apprehensions we had about visiting Siquijor. In particular the island is surrounded by a large number of white sand beaches spread out evenly among its 6 towns.

The town of Maria on the eastern coast of Siquijor is home to two beautiful beaches including Salagdoong (Sa-lag-doe-ong) Beach, a public beach managed by the local government. An irritant in the form of an unsightly-looking water park that according to Lonely Planet “has seen better days” stands atop karst rocks in the center of the beach. Despite this Salagdoong charmed us with its white sand and crystal-clear aquamarine and turquoise waters where we swam and snorkeled to our hearts’ content. A lesser-known but no less stunning beach is Kagusuan (Kah-goo-soo-anh), a deserted beach that we had all to ourselves the first time we visited 7 years ago.

On the western coast of Siquijor past Larena is San Juan with a string of white sand beaches. While this town contains the most number of resorts on the island – and where we stayed during our second visit – the beaches have been kept clean and pristine. The beach in front of Coral Cay Resort is typical of the long line of white sand beaches that begins here and ends somewhere near the Coco Grove Beach Resort. There’s plenty of good diving here as well, especially at Maite (Mah-ee-teh) Point and at the Tubod (Too-bod) Marine Sanctuary in front of Coco Grove. Because they face west, San Juan’s beaches are known for spectacular sunset views.

Our favorite beach in the whole province during our first visit was Paliton Beach in the northern part of San Juan. At that time no resorts or tourist establishments existed at Paliton (Pah-lee-ton) which has been declared a marine sanctuary with its excellent dive sites. The beach was practically unheard of when we first arrived in late 2013 and we were the only ones in the area. Fast forward 6 years later and we would encounter a sizable crowd and lively food stalls on the palm-fringed beach. But still no resorts.

South of San Juan is the capital town also named Siquijor with its own collection of white sand beaches and old churches. The most interesting view here is the port which is situated on a stretch of blindingly white sand beach at low tide. At high tide the views are just as magnificent with a maze of aquamarine and turquoise waters offshore which makes this port the cleanest and most beautiful we’ve encountered so far. How often does a commercial port turn up as a tourist attraction?

The last town on this list is the southernmost municipality of Lazi (Lah-zee). Easily the most popular natural destination here is the three-tiered Cambugahay (Kam-boo-gah-hai) Falls with its cool spring water, surrounding verdant forest and gorgeous turquoise-colored catch basins. It is situated just beside the road and the 136-step walkway going down the falls is no problem – except when you have to go back up. But there are no long hikes to get here and just a little exercise won’t hurt. The more adventurous can play Tarzan at Cambugahay’s lowermost tier by using a swing to catapult themselves into the water.

Lazi is home to two historical sites – the San Isidro Labrador Church, built mainly of coral rock and an excellent example of local baroque architecture, and the adjacent San Isidro Labrador Convent, one of the oldest and biggest convents in Asia. The church was closed on both occasions when we visited but we did get to tour the convent’s interior. Nina had an eerie feeling about something supernatural inside this convent – the same sensation she felt when we visited the Tuol Sleng Genocide Museum in Phnom Penh, Cambodia which locals say are haunted by ghosts of victims of the Khmer Rouge. This was perhaps the closest thing we’ve had to a spirit encounter in two visits to Siquijor.

Another destination here that often prompts talks about the supernatural is the Centuries-Old Balete (Bah-leh-teh) Tree also in Lazi. Sometimes known as the strangler fig tree, the balete starts off by attaching itself to a tree, growing hanging roots, then encircling the host tree before suffocating and killing it. Many Filipinos have associated these trees with the supernatural, believing that the balete harbors creatures from the underworld such as dwarves, kapre (Kah-preh – a tree demon) and tikbalang (Teek-bah-lang – a horse demon). One look at this huge balete with its numerous hanging roots and you begin to appreciate the superstition ascribed by locals to the mystical-looking tree. And since Siquijor has long been associated with the occult, the Centuries-Old Balete Tree takes on an even more sinister reputation.

Besides Nina’s eerie sensation at the convent in Lazi, however, we had no other such encounters elsewhere on the island. The friendliness of the locals – we believe many are actually offended by Siquijor’s reputation as a center of occultism and sorcery ­– partly served to dispel notions of the province’s notoriety. And on our second visit the island had a different and obvious festive vibe with places where we used to be the only visitors now filling up with tourists, resorts and dining areas. This probably explains why the island is now popular with Filipinos who were very hesitant about visiting the province years ago.

There are no direct flights to Siquijor from Manila or Cebu but there are daily flights on Cebu Pacific and Philippine Airlines to Dumaguete City, the nearest commercial airport. From the port at Dumaguete there are several ferries bound for Siquijor town or Larena. The fast ferries can make the trip in 45 minutes or so. On Siquijor itself travel is mainly by motorbike (there are motorbikes for rent), trikes or small 4-wheeled vehicles called multi cabs.

For the moment travel to Siquijor and other places in the Philippines are restricted due to Covid-19 although the provincial government is looking to reopen its tourism industry as part of the local government’s recovery plan amid the pandemic.