Home World Travel To Live and Dine in Bologna: Three-Days in the Gastronomic Capital of Italy 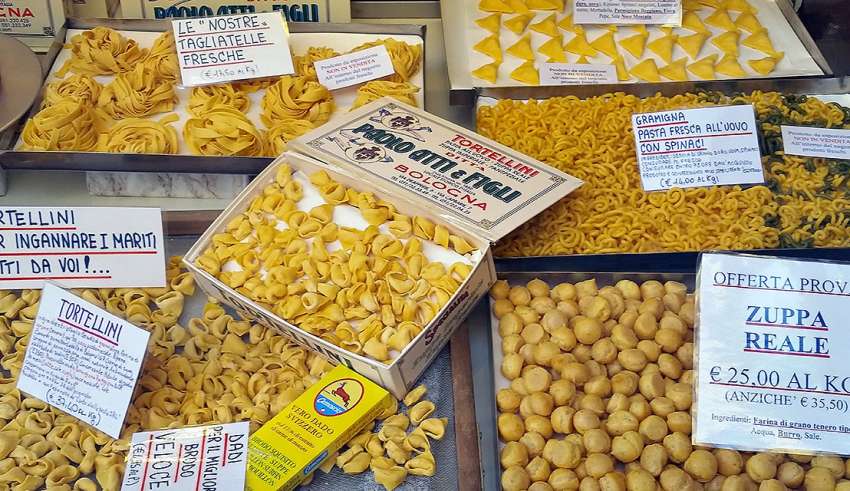 My dreams had been colored by my upcoming trip to Bologna. Nestled in north central Italy in the region of Emilia-Romagna, Bologna has long been considered the gastronomic capital of Italy. With the moniker of ‘La Grassa’ (the fat one), it is the birthplace of Mortadella di Bologna, Tagliatelle al ragù, Tortellini en brodo, Lasagne alla Bolognese and so much more. Nearby in the rich agricultural area of the Po Valley, the cities of Modena hails balsamic vinegar as its home, and Parma, Parmigiano–Reggiano and Prosciutto di Parma, which all seem to make their way onto the Bolognese table. And, yes, there would also be a number of city attractions to explore. With just three days devoted to my exploration and culinary tour, I literally couldn’t wait to dig in.

It’s easy to get lost when wandering through Bologna’s narrow, somewhat gritty side streets lined with shops, markets, restaurants and osterias (taverns), the later offering monumental happy hour antipasti dishes for the price of a simple glass of wine.  Every little side street in the historic city center seemingly leads to a stunning piazza with remarkably preserved cathedrals and towers along with museums (there are over 50) and outdoor cafés. The city is a stunning blend of urban charm and history. Bologna boasts the Università di Bologna, the oldest university in the world (circa 1158), and is referred to as the most educated and forward-thinking city in Italy. Bologna, for example, was the first city in the world to abolish slavery. If you’re short on time, a hop on/hop off bus is the best way to begin your exploration, which offers a comprehensive overview of  Bologna from the Etruscan and Roman origins to its modern culture of today.

The two leaning towers, Garisenda and Asinelli, are the most traditional symbols of Bologna. Yes, they both really lean. In the late 12th century, one hundred towers graced the skyline, but today only twenty have survived the ravages of fire and war fare. The wealthy would live on the top floor of the tower, to avoid theft and street-fighting. Take the staircase to the top of the Asinelli tower where you can admire the red roofs and the hills around the city, plus get oriented.

After climbing Asinelli tower it was time for a break. Piazza Maggiore is a good place for a refreshing Aperol Spritz and a platter of Bologna’s most important antipasto: Mortadella di Bologna.

Not to be confused with the bastardized version of bologna available in the U.S., Mortadella di Bologna is a paper thin sliced heat-cured pork sausage, served room temperature, generally flavored with small cubes of pork fat, whole black pepper, myrtle berries, nutmeg and pistachios. Surprisingly, it is low in calories. The platter can include a dollop of a creamy soft cheese, such Asiago or Toma Piemontese, along with a basket of pocket-sized gnocco fritto (fried bread, similar to the New Mexican sopapilla). Watching life go by from an outdoor café, it was easy to see that Bologna offered a nice blend of tourists and locals, unlike the overtly touristic destinations of Venice, Rome and Florence.

Considered Bologna’s most important religious site (circa 11th-century), Basilica di Santo Stefano has been relished for centuries in Bolognese history. Originally it consisted of seven churches on the site, but only four remain intact today. The austere octagonal cathedral incorporates Romanesque and Lombardian architectural design as well as  housing the bones of San Petronio. After a long decline, Bologna was reborn in the 5th century under Bishop Petronius. It is not to be missed.

It had been an exhausting day of exploring, and my stomach told me that a much awaited bout with tagliatelle al ragù and tortellini were definitely in order. In Bologna, fresh egg pasta is the thing, and tagliatelle pasta is no exception. The fresh noodles are lathered in a thick ragù alla Bolognese sauce, consisting of onions, carrots, pork, veal, and with just a little bit of tomato. It was splendid, but a bit more rustic than I had imagined. Readers note: a Bolognese sauce in the U.S. simply means a tomato sauce with beef, and is not an authentic Bolognese dish.

Tortellini en brodo (in beef broth) is the traditional first course for Christmas feasts in Bologna. The shape of the pasta dumpling (generally filled with a mixture of pork loin, prosciutto, mortadella and parmigiano), is said to be inspired by Venus’ navel. Another interpretation is that an innkeeper was captivated by the beauty of a guest. He spied on her from a key hole, but all he could see was her navel. He was so inspired that he created the dumpling in her honor. I wasn’t in the mood for soup, so opted for the equally delicious Tortellini alla Panna (cream sauce).

A kiddie-like train leads up to The Sanctuary of the Madonna of San Luca, a monumental basilica church nestled atop a forested hill, with breathtaking vistas of the city and surrounding countryside. History tells us that the church existed on the hill for over ten centuries when a pilgrim from the Byzantine empire came to Bologna with an icon of the Virgin Mary from the temple of Saint Sofia in Constantinople. Initially the small hermitage-chapel was tendered by two holy women. The present church was constructed in 1723 using the designs of Carlo Francesco Dotti. Today, pilgrims from all over the world (many bare footed) join an annual pilgrimage along the path from Bologna to the sanctuary.  Upon reaching the top, the sanctuary opens up in an inspiring display of Baroque architecture, statues, painted artworks, sacristies and frescoes.

The experience also had an effect on my appetite. So for my last meal in Bologna, it had to be my favorite Italian dish, the quintessential Lasagne alla Bolognese. The preparation of the dish consists of layering wide green pasta with a rich ragù sauce, besciamella cream sauce and abundant Parmigiano–Reggiano cheese, then baked in the oven. Once again, with the rich ragù sauce, it was more rustic than I had thought, but every bite was still a gift from heaven. My list, for now, was complete for the three-day culinary tour and exploration of this fascinating historical city. And I will absolutely return to Bologna again for more sights and other tantalizing dishes.

Wait a second, how could I have forgotten the delicious and filling Cotoletta alla Bolognese, (similar to Cotoletta alla Milanese, but with a slice of prosciutto and cheese on top, then a spoonful  of ragù). Perhaps the reason it was overlooked was that this delicious dish was the last thing I ordered in Bologna, and was tragically unable to finish it. My waitress looked down at the half-eaten dish, and asked if it was ok.  I replied it was beyond tremendous, but I just couldn’t consume any more food.  She smiled and replied, “Well, we are called the ‘Fat One’ for a reason.”

The history of Italian-American cooking

About 4 million Italians immigrated to America from 1880 to 1920. The majority (about 85 percent) came from southern Italy, where political and economic circumstances left the region extremely impoverished, so it would be the cuisines of  Sicily, Calabria, Campania, Abruzzi and Molise that would make their mark in the U.S. kitchen. Until recently it was difficult to even find Cucina alla Bolonese in the U.S.

Here’s a list of other of tantalizing Bolognese dishes in which I will sample on my next visit to ‘La Gassa’ – the gastronomic capital of Italy.

Polpette alla Bolognese: Meat balls made with veal meat, mortadella, parmigiano, eggs, bread and milk. It is similar to a meatloaf, sliced, and covered in a meat sauce/ragù, and served as a main course. When you go to Italy, you will not find the Italian-American dish, spaghetti and meatballs on the menu. If you do, it’s probably to satisfy the palate of insistent American tourists. (think of the Hollywood film, ’Big Night,’ where the chef, who prided himself on only serving authentic Italian dishes from his homeland, refused to serve it to astonished American customers). Anglo-American diners in New York City, were accustomed to having  a protein accompaniment to their main course, so meatballs were added. It was one of the many ways southern Italy immigrants adapted to the New World, in an attempt to assimilate into this strange, new culture. Spaghetti became popular for it was the main Italian pasta available in the U.S.  A further comment, pasta in Italy is always a first-course dish, not a main course.

Tortelloni: Basically a larger version of tortellini, but with a milder tasting filling of Parmigiano-Reggiano and either spinach, swiss chard or parsley. They are typically served in a butter and sage sauce or a tomato and butter sauce with plenty of grated Parmigiano sprinkled on top.

Bollito Miso: Made of vegetables and various meats, like chicken, beef, and sausage, simmered together and usually served with an anchovy-garlic sauce

Friggione: A sauce made of white onions, olive oil and tomatoes, eaten with bread or pork meat or polenta.

Pinza: A short crust pastry recipe similar to Raviole, but made with a stuffing of Mostarda Bolognese,(a sort of a marmalade of apples, peers, plums, almonds and raisins and a little bit of mustard). Pinza is oval shaped, bigger than Raviole, and is oven cooked before being eaten plain or dipped in a cup of milk for breakfast.

What are some of the “things” or activities that French people do for fun? ANSWER: In the …