“New Yorkers love it when you spill your guts out on the Court. Spill your guts at Wimbledon, and they make you stop and clean it up.”
–  Jimmy Connors

I love the quote above, not only as it comes from one of the most colorful, brilliant and even outrageous American tennis players ever, but also because it captures how clean Wimbledon is.  Even though this classic tennis tournament has come to an end, you can still visit Wimbledon up close and personal.

Even if, like me, you’re NOT a tennis buff, a tour around this internationally famous series of buildings and grass tennis courts, is intriguing. Just take the grass, as an example. I mean c’mon on now, how boring is thinking about Wimbledon’s grass! And yet it is a critical part of how balls bounce, where they go, and how they are “played” by tennis super stars.

There are 19 courts plus 22 for practice (!) since 1991 and according to the Head Groundsman, all Wimbledon courts are sown with 100% perennial ryegrass, as it improves durability. The grass has been cut and maintained at a height of 8mm since 1995, and all are rolled, covered and constantly tested for their firmness and yes, would you believe, their speed. I found it fascinating to learn that if the grass is too damp, it will cut up, become unstable and cause the ball to bounce irregularly. 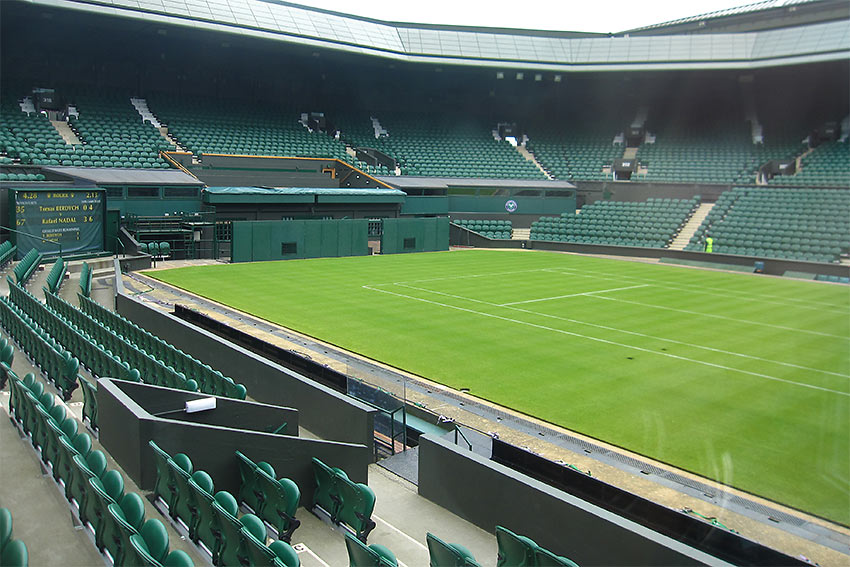 Another area of interest on our tour was the press room – which looks like a scene from some 1940s movie about a large big city newspaper where lots of harried reporters dash off to get their stories filed, as the room has a seemingly endless series of special booths for the sports media. I was stunned to hear our guide say that the tennis stars are “required” to submit to interviews – it’s even written into their contracts that if requested, they MUST do the interview, but I was saddened that he declined to share the name of one star who actually refused to do any interviews – and was heavily fined.

In October 1940 the Nazi Luftwaffe dropped five 500 lb bombs on the Centre Court – which makes me ask, were they actually aiming for that?! In 2009 a retractable roof (costing 80 million British pounds) was installed on the Centre Court, so play would always continue in the event that the rains came. In 2003 the Duke of Kent ordered that the long standing tradition of curtseying to the Royal Box be abolished because, he said, “It is an anachronism in modern times.” Now get THIS bit of tennis trivia, until 2006 women were paid LESS than men who appeared at Wimbledon, but the chairman of the Committee who managed the site at the time, Mr. Timothy Dewe Phillips, CBE, said it was not “right or correct,” so from 2007 onwards men and women earned equal prize money – a decision that overturned a century of inequality. 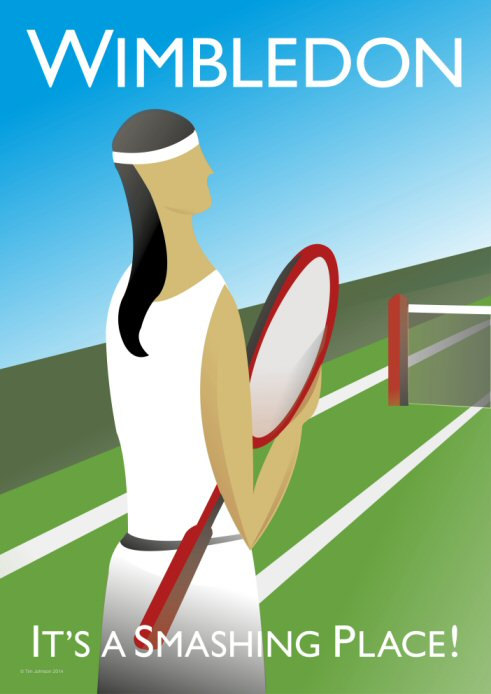 Tennis buffs will love the Tennis Museum that’s filled with tennis memorabilia dating back to 1555 from all over the world – plus a marvelous holographic display with John McEnroe in one of the Dressing Rooms. There’s also many world famous trophies, and more tennis trivia, artifacts and “stuff,” than you ever knew existed – It’s said that one always saves the best until last. If that’s true, then the Centre Court is magnificent. When our tour group trooped in to this amazing piece of real estate, there was an eerie stillness that seemed unreal, and made me think it was a sort of sacrosanct religious site.

When one of our media group asked if they could touch this piece of what I was now convinced really was hallowed ground – the guide seemed appalled at the idea that someone would even ASK to do that, saying – in a very somber voice – in all his years at Wimbledon, HE had never been allowed to touch it, or walk on it. ”In fact,” he said in a whisper, “it’s in my contract not to walk on it.” It all seemed so unreal, because when I first arrived, I saw the 3,601 empty seats.  I was struck by how small it seemed from the TV images – where it looks gigantic. Then, when I looked at the small entrance where the tennis stars entered the court, it reminded me of the gladiators coming out into the arena in the days of the old Roman Coliseum.

Get more information about Wimbledon