In 1830, President Andrew Jackson pushed a new piece of legislation through Congress called the “Indian Removal Act.” American-Indian tribes* were to give up their lands east of the Mississippi in exchange for lands to the west in Oklahoma. Jackson said that this was for the various tribes’ protection, but there was an ulterior motive – Euro-Americans settlers were anxious to take over their land, particularly in Northern Georgia, the home of the Cherokee Nation, where gold had been discovered. 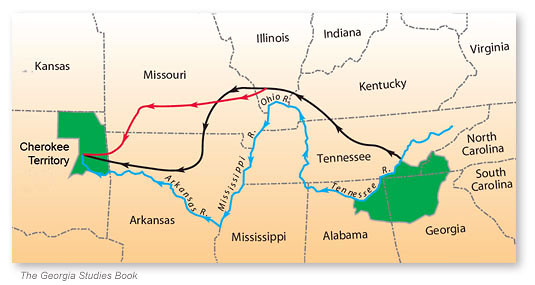 A number of American-Indian nations made attempts at non-violent resistance, but eventually felt that this was an inevitable removal and that there was no way to stop the U.S. Government. The 22,000 citizens of the Cherokee Nation, however, decided to take their protest all the way to the Supreme Court. Considered one of the “civilized” tribes of the Southeast, they had adopted Euro-American practices of large-scale farming, western dress and education, slave-holding, and a uniquely Cherokee expression of the Christian faith. They even had an English language newspaper. The Supreme Court sided with the Cherokee, saying that they had a constitutional right to stay in their ancestral land. President Jackson refused to enforce the law.

In 1838, the U.S. Government sent in 7,000 troops, who forced the Cherokees into stockades at bayonet point. They were not allowed time to gather their belongings, and, as they departed, their homes were looted by new settlers before their very eyes. They began a thousand miles march to an area in present-day Oklahoma, just outside of Tulsa. Over 4,000 out of 16,000 Cherokee people died of cold, hunger, exhaustion and disease, primarily seniors and infants. The Cherokee people call this journey “The Trail Where They Cried“ (Anglicized “The Trail of Tears”) –  a journey that saw more people die than perished in the attacks of September 11, 2001.

“I fought through the War Between the States and have seen many men shot, but the Cherokee removal was the cruelest work I ever knew”
— Matthew Edward Lear, Georgia soldier who participated in the removal of the Cherokee

In the years that followed, the Cherokee struggled to reassert themselves in this new, unfamiliar land in Oklahoma. Soon they transformed the area, creating a progressive court and education system with a literacy rate higher than the rest of the U.S. Many white settlers took advantage of their superior schools, and paid tuition to have their children attend the Cherokee schools. Today the Cherokee Nation is the second largest American-Indian tribe in the United States. They are an all-inclusive tribe where one can have 1/32nd  Cherokee blood and still be considered a full member of the nation. Many of the Cherokee people I met could pass for Norwegians. Think: Elizabeth Warren who was born in Oklahoma. There are currently more than 290,000 tribal members; 70,000 of them reside in the 7,000 square miles of the Cherokee Nation. Oklahoma grew up around the nations of the American-Indian Territory, and that influence can be seen today.

Committed to telling the story of the Cherokee, the Cherokee National Museum offers exhibits, cultural workshops and events. The center includes the Adams Corner Rural Village, Cherokee Family Research Center and Cherokee National Archives. The museum houses the award-winning Trail of Tears interpretive exhibition – an experience that will stir you to the depths of your soul. Another must-see, is the Cherokee National Supreme Court Museum, oldest government building in the state of Oklahoma. The Supreme and District courts both hold sessions here. Historical items include photos, stories, objects and furniture. The building also houses the printing press of the bilingual Cherokee Phoenix – the first bilingual newspaper in the U.S. – and the Cherokee Advocate.

The Trail of Tears National Historic Trail was designated to preserve the story, the routes, and support the associated sites that commemorate the Cherokees’ forced migration.

*Editor’s note: I have traveled to many Tribal nations throughout the U.S., and was informed by numerous Tribal Elders that their people prefer to be called by their Tribal names, or generically ‘American-Indian,’ for that was how the treaties were signed with the U.S. Government, despite many of them broken by the U.S.  The term “Native-American” is a name coined by politically correct Euro-Americans.

Life should always be more than a bowl of cornflakes, a tin of baked beans and a pot full of scouse.
[/expand]