Home Raoul's TGIF All About Age

Gravitating Towards the Inevitable

I fell off a ladder last Saturday.

Yup! I volunteered to help with the Easter service stage and, being relatively tall, I said I would help attach the higher pieces to the unreachable spots. A voice inside me warned me not to climb the ladder. But I didn’t listen. When the  wobbling started, an old voice said “get down you old fool!” but another younger voice said “it’s just one more step … you can make it.” Before I knew it, the ladder lost its footing and everything went slow motion. The ledge I was trying to step up to went further away. I realized it was I who was moving further away. There was nothing to hold onto. I remember thinking “this could be it. I could die now. If not, Lord, at least don’t let me hurt too badly.” It was relatively soft on the carpeted wooden panel but it was the sudden landing that sent a jabbing pain that ran up my already fragile back. I had the presence of mind from my Judo class in college to tuck my chin in but I still bumped my head on the cement wall. The A-frame ladder closed and crushed my fingers. It’s been almost a week and some parts of me still hurts. I’m sure I’ll be back to normal by next week.

Denial. That’s a pretty dangerous but common mental exercise boomers have when they face their twilight years. If you’re one of them, take my advice — live with it! Own it!

I hope I’m not too blunt but allow me to point out some famous people. Rather than accept inevitable gravity, it’s amazing how many desperate celebrities spend their millions on horrific plastic surgeries. Goldie Hawn, Nicole Kidman, Michael Jackson, Kenny Rogers, Cameron Diaz, Meg Ryan, Mickey Rourke, Demi Moore — c’mon guys, what were you thinking? Was all the pain and money really worth it? Are you happy to see the stranger in the mirror?

Hair rejuvenation. The hair growth supplements do not affect a majority of bald people. The hair transplants probably do work for a time but when you see several follicles coming out of one spot like rice fields, it’s rather comical.  Think about it. When Donald Trump, Bruce Willis, Sean Connery, Nicolas Cage, Jason Statham, Ben Afleck, Kevin Spacey, Jude Law, Michael Jordan, Warren Buffet, Steve Jobs, etc. could not “buy” their hair back, do you think that you could?

Fortunately, there are people I admire who learned to age gracefully. I think of Anthony Hopkins, Pope Francis, Billy Graham, Vanessa Redgrave, Meryl Streep, Audrey Hepburn, George Clooney (so far) … at least these guys only look better with age.

Falling down the ladder opened my eyes to the imaginary border separating Never Never Land and Survivor Island. And you know what? It’s not that bad over here. Mother Teresa, Col. Sanders, Mandela — are just a few of the many late-blooming senior heroes. Sure, one day I’ll be bed-ridden and my teeth are all gonna fall off but till that day, I’m gonna create, teach, give and love as much as I possibly can. You should too.

“You can’t help getting older but you don’t have to get old.”
— George Burns

Shared by Naomi of North Hollywood

I changed my car horn to gunshot sounds. People get out of the way much faster now.

I didn’t make it to the gym today. That makes five years in a row.

I decided to stop calling the bathroom the “John” and renamed it the “Jim”. I feel so much better saying “I went to the Jim this morning.”

When I was a child I thought “Nap Time” was a punishment. Now, as a grownup, it feels like a small vacation.

The biggest lie I tell myself is.. “I don’t need to write that down, I’ll remember it.”

I don’t have gray hair …  I have “wisdom highlights!”  I’m just very wise.

If God wanted me to touch my toes, He would’ve put them on my knees.

Last year I joined a support group for procrastinators. We haven’t met yet.

Why do I have to press one for English when you’re just going to transfer me to someone I can’t understand anyway?

Of course I talk to myself … sometimes I need expert advice

At my age “Getting lucky” means walking into a room and remembering what I came in there for.

Actually, I’m not complaining because I am a Senager. (Senior teenager) I have everything that I wanted as a teenager, only 60 years later. I don’t have to go to school or work. I get an allowance every month. I have my own pad. I don’t have a curfew. I have a driver’s license and my own car. The people I hang around with are not scared of getting pregnant. And I don’t have acne.

Life is great! I have more friends I should send this to, but right now I can’t remember their names.

Now, I’m wondering — did I send this to you, or did you send it to me?

A Millennial in the Operating Room
Sent by Mel of Washington, D.C.

I can see this happening.

Senior at Target Practice
Sent by Don of Kelowna, B.C.

Seniors do it differently.

Thanks to Dom of Kelowna, B.C. who shared this photo 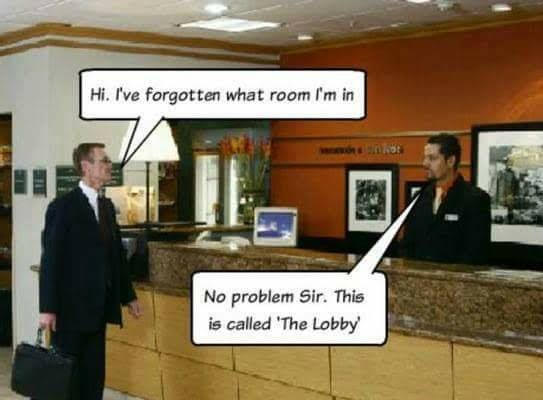