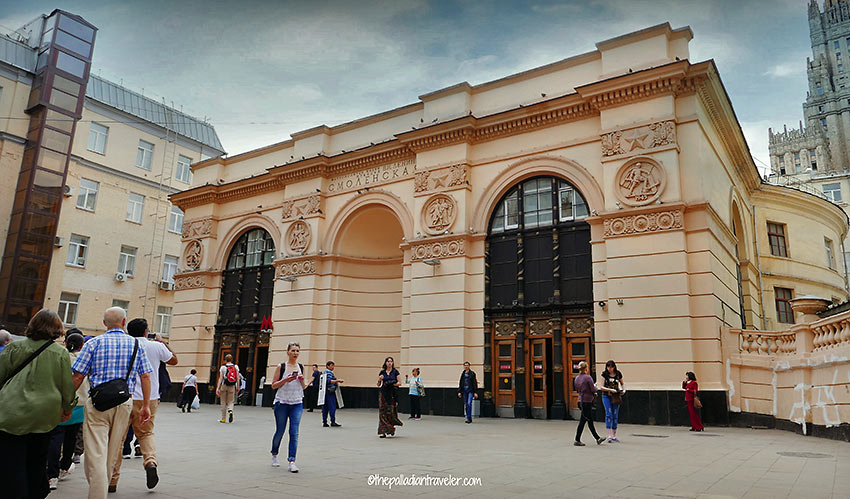 Through the turnstiles at Smolenskaya Station we go, me, the lone photojournalist invited by Insight Vacations to sample its Easy Pace Russia journey, and 22 traveling mates for an hour of underground time-travel back to the days of the old Soviet Union. 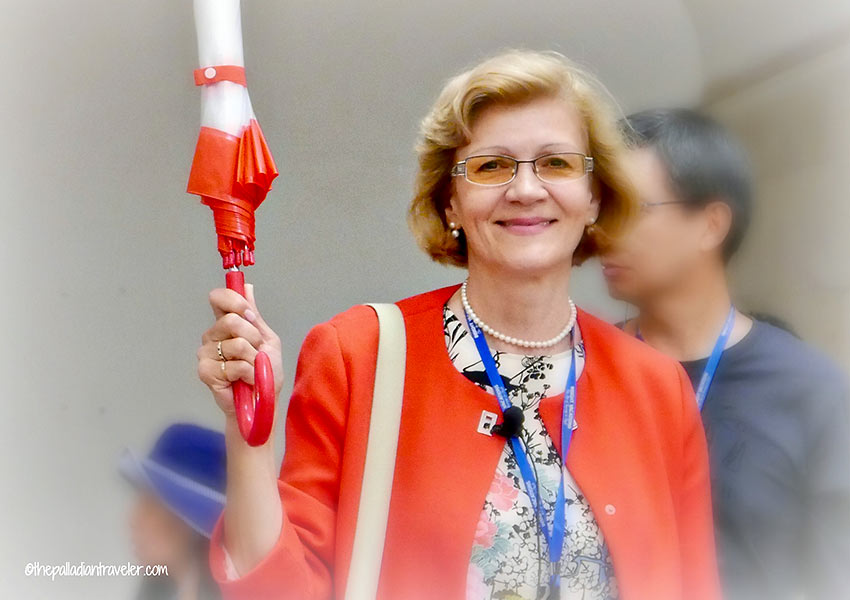 “Opened in 1935 as just a single, 11 kilometers-long line with 13 stations,” comments Vera, our local art-history guide in the easy-to-spot, bright-red jacket and matching red-and-white umbrella, “Moscow’s metro system of today has grown to 12 lines, 346.2 kilometers of track and 206 stations, with more expansion planned for the very near future.” 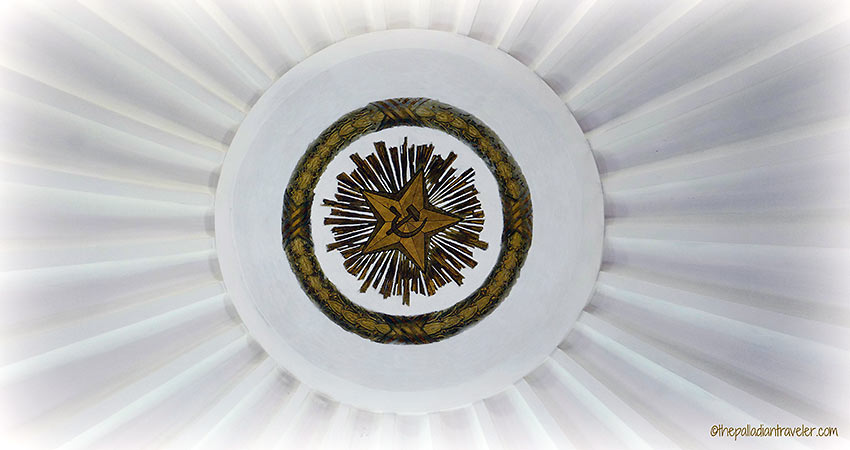 Sure, we’re here to share a ride with anonymous Muscovites, but, more importantly, we’re 50m below the surface to get a sense of what life was like in the U.S.S.R. via the thematic, hammer-and-sickle public art displays that are showcased in the many spotless stations, the so-called “palaces for the people,” that Joseph Stalin commissioned.

“Locals and foreigners alike claim that the Moscow Metro system, with its abundance of Socialist Realism art and architecture, is the most beautiful in the world,” comments Vera through our earbuds as we walk around the station, one of the 44 that are listed on the Russian Cultural Heritage Register. “It’s also the fifth largest system in the world,” she adds, “and its daily ridership of about nine-million surpasses both the New York City and London subway systems combined.” I’m impressed. 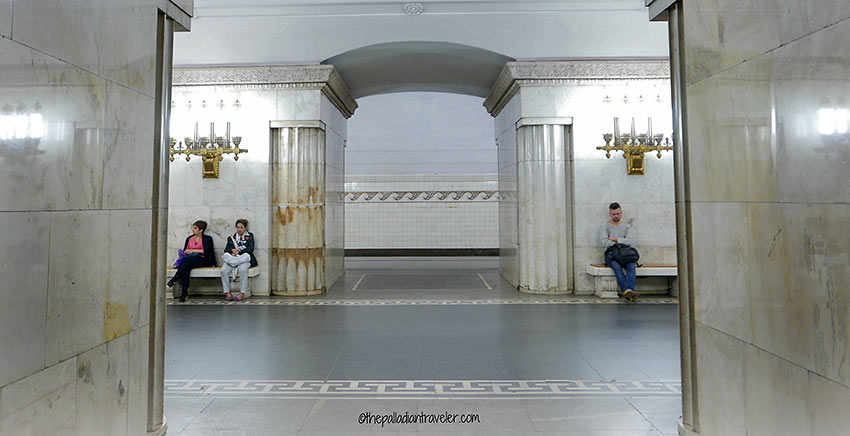 Cost of a single ticket is 55 rubles (approximately $.90 USD) which entitles the passenger to ride to any number of stations and make transfers within the system freely. Riding on Insight’s ruble, I’d say we’re a pretty inexpensive date. 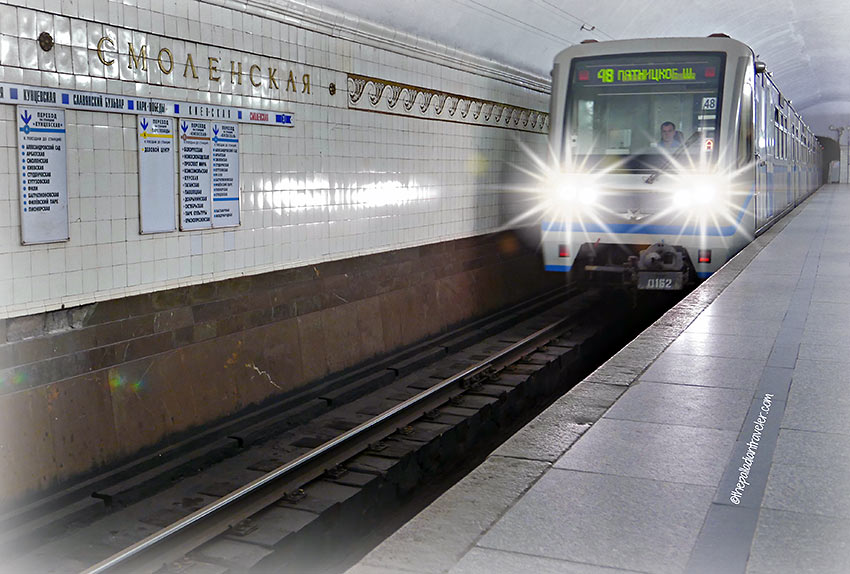 With a train coming and going about every 90-seconds during rush hour, three to five minutes during off-peak, our time on the platform is brief as we hop on and head to Kievskaya Station on the Blue Line. 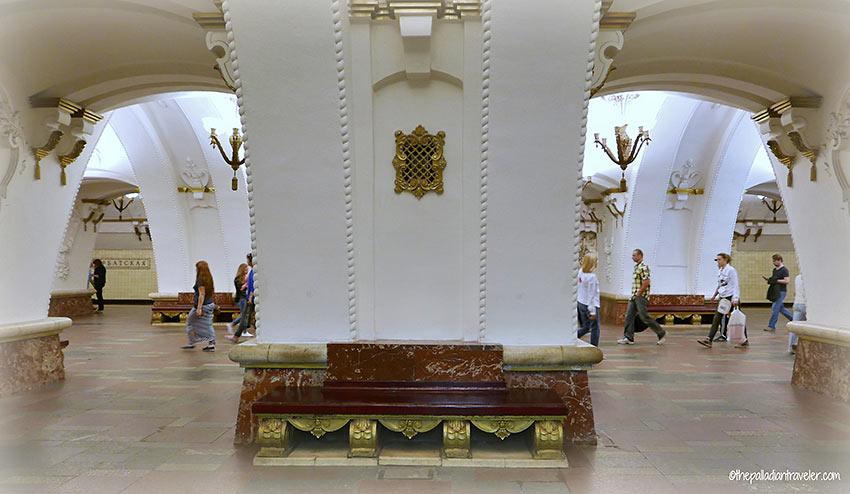 Inaugurated in 1953, Kievskaya is noted for its high white arches atop square pylons wrapped in red marble. Along each arch are detailed mosaics surrounded by a yellow-gold, baroque-style frame. The station’s theme depicts the 300th anniversary of the reunification of Ukraine and Russia. 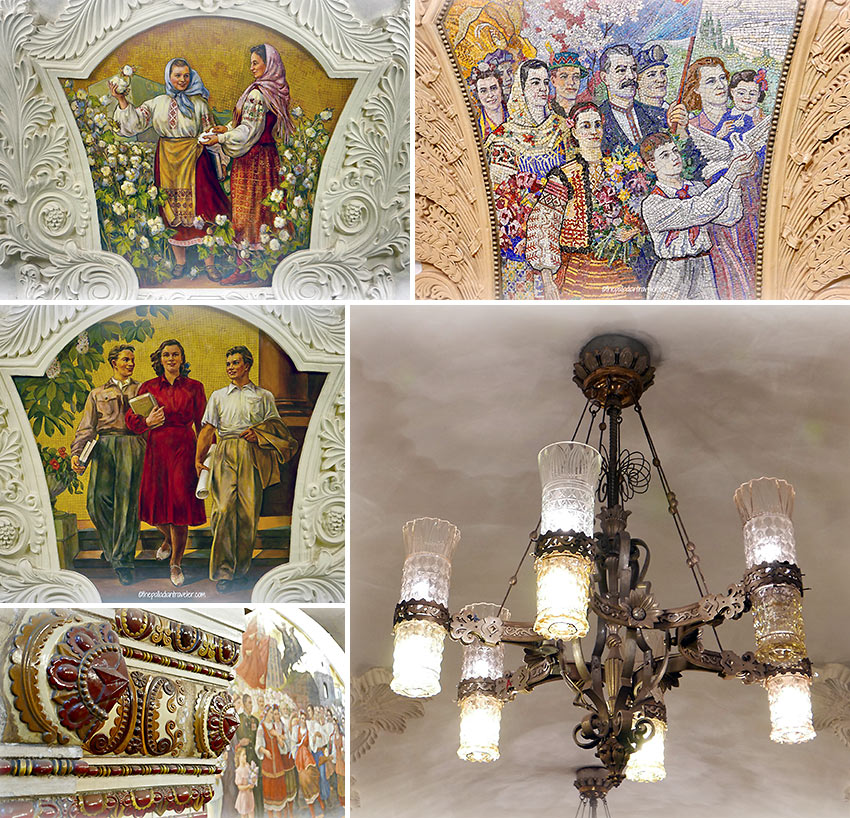 When asked about the importance of the Moscow Metro, Vera replies: “It was touted as THE symbol of the new social order under Stalin, as these metro stations, with their reflective marble walls, high ceilings, artwork and grandiose chandeliers, became the focus of modern Communist engineering and architecture that eventually traveled above ground, too, in the form of the ‘Seven Sisters.’ 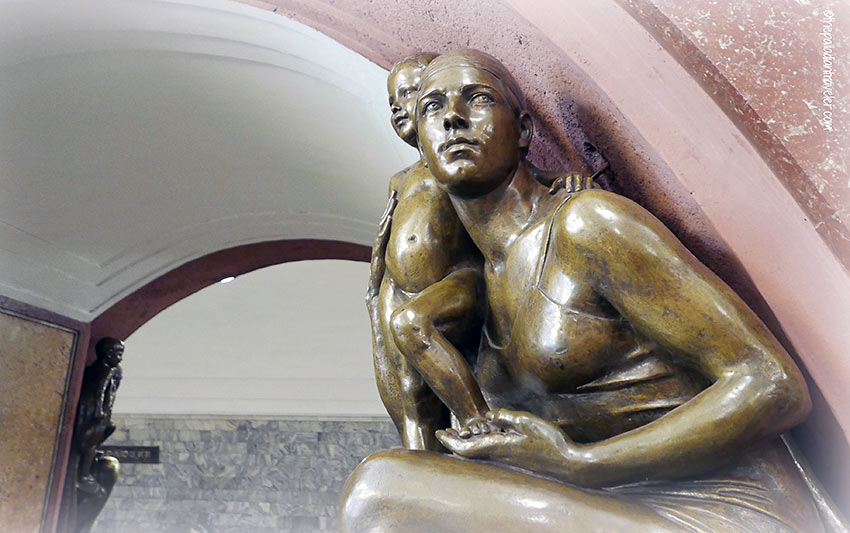 No other station speaks more directly to Socialist Realism in public art than the Ploshchad Revolyutsii (Revolution Square) station, constructed right underneath the square and our last stop on this underground, cultural museum primer. 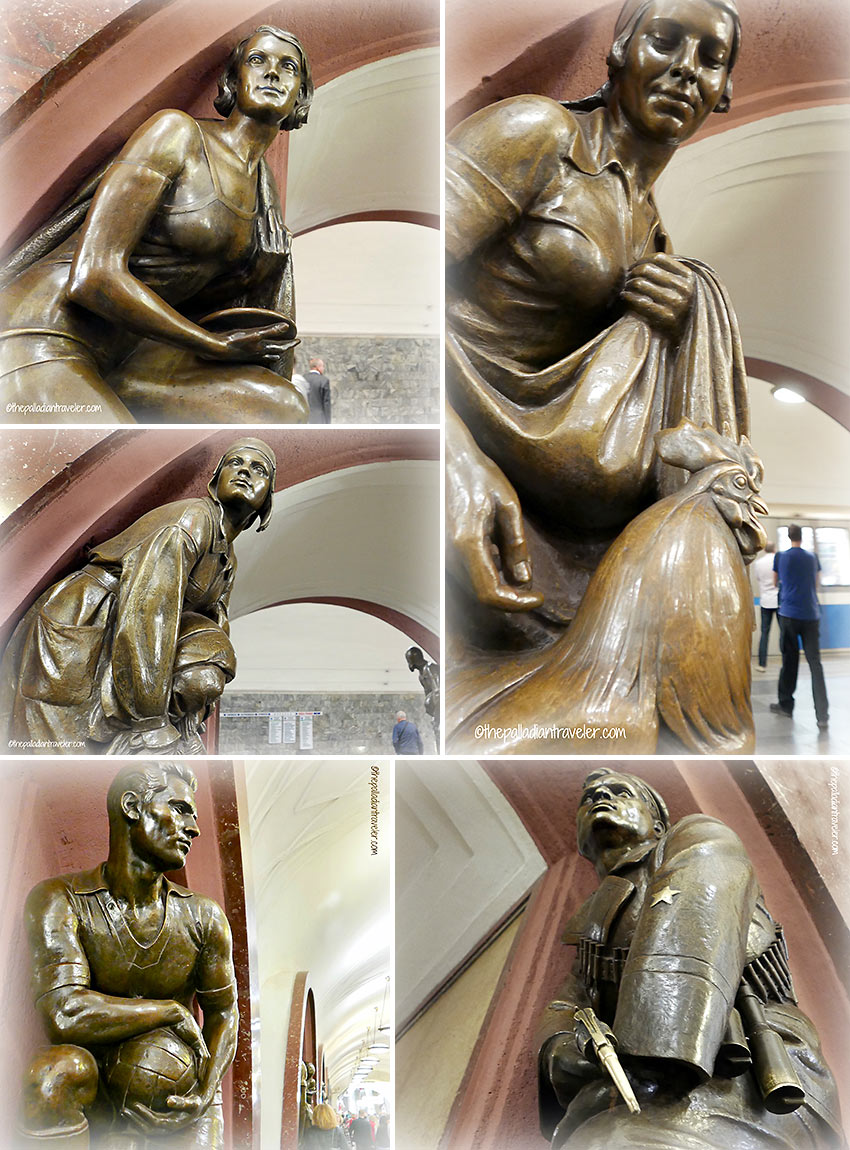 In service since 1938, this “palace” features red and yellow marble arches resting on low pylons faced with black Armenian marble. Each arch is flanked and supported by a pair of bronze sculptures depicting the common man doing his/her part for the Soviet Union: soldiers, farmers, athletes, writers, aviators, industrial workers, and schoolchildren. 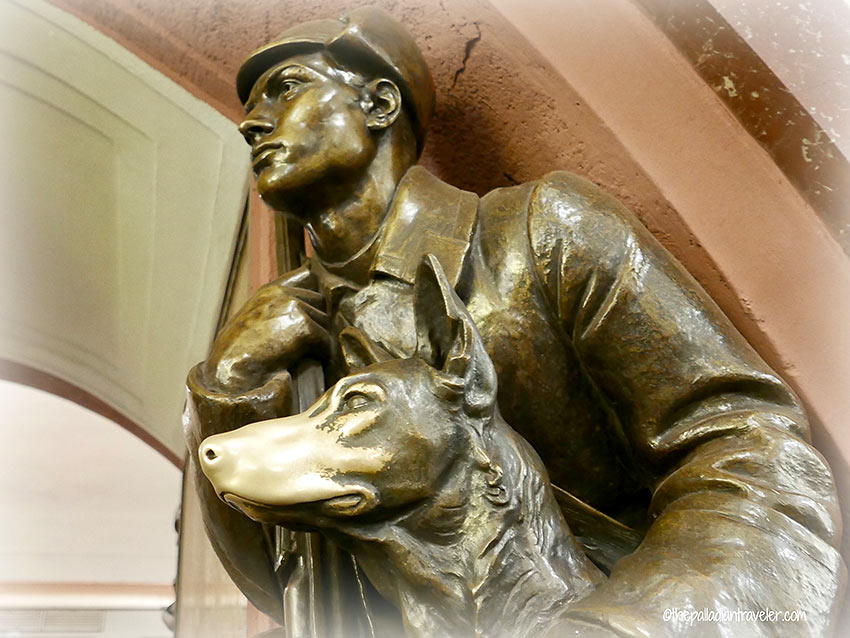 A total of 76 sculptures are on display at the Revolution Square Station, all created by Matvey Manizer, including the crowd pleasing frontier guard and his dog. It’s believed to bring good luck if one rubs man’s best friend’s nose. From the look of its snout, this canine has been petted quite a lot. 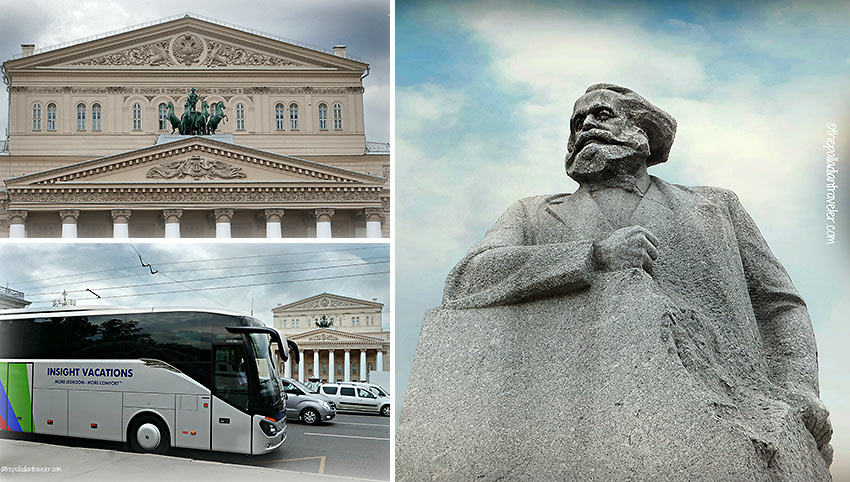 Returning above ground, we make our way through Revolution Square, past the statue of Karl Marx, the Prussian-born philosopher considered to be the “Father of Communism,” and onto the waiting Insight motor coach, parked right in front of the world-famous house of ballet and opera: Bolshoi Theatre.

Tourist: “Uh, excuse me sir, but how do you get to the Bolshoi Theatre?” 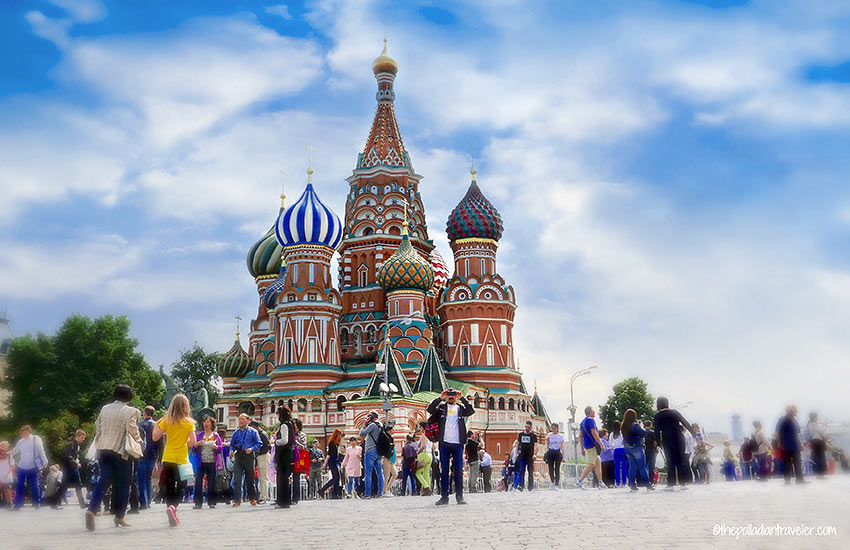 Our second day in Moscow is just getting started. As soon as “Alexander the Great,” our Insight pilot, maneuvers the coach through traffic, we’ll have another look around Red Square and go window shopping at the grand, elegant and opulent Main Universal Store: GUM.