Home Politics Hot Enough for You?

Thomas Neuburger has written political analysis for numerous publications for nearly two decades. You might have come across him as his nom de plume, Gaius Publius. He has long been a professional writer, venturing into fiction, poetry, essays and non-fiction books. Despite spending his teen years in the same Kansas town, Prairie Village, as I did, I didn’t know of Tom until I started contributing to Down With Tyranny, where he is very prolific. Tom, who resides in Portland, Oregon, is currently launching a forum at Substack. One can subscribe for an eclectic grab-bag including political essays and excerpts of longer form works in progress, including an examination of the evolving US Constitution. He named his site “God’s Spies,” encompassing all of us, with that hard-to-shake feeling that we’re characters in a novel.

A key concern of Tom’s is global warming and its potential to rewrite all our storylines. Befitting the hottest decade on record, with the six warmest years lined up since 2015, Earth just logged the hottest November ever. Timeliness is never in short supply for this topic. Tom addresses it again in the DWT piece below.

Much of the U.S. Could Be Uninhabitable by 2050

Humans die when it gets too hot; that barely merits saying. But how hot is too hot, and how fast does “too hot” catch up to them?

The answer is important because much of the country in specific, and of the world in general, is going to be too hot fast, thanks to climate change.

First, let’s look at what “too hot” means, then at what parts of the U.S. will shortly become uninhabitable. Along the way, we’ll see what change in U.S. food production will inevitably result, since heat will be a factor there as well.

Human core body temperature, the temperature on the inside of our bodies, usually stays in the range of 36.5–37.5°C (97.7–99.5°F), and must stay in this range to ensure long-term survival. Bodies have a number of mechanisms for regulating core temperature. One the most important is the production of sweat on the surface of the skin which, when it evaporates, cools the body.

The amount of evaporation from the skin is, naturally, a function of the humidity and circulation of the air around the body. So by definition, at 100% humidity and no air circulation (no wind), evaporation is impossible. (“100% humidity” means the air is already saturated with as much moisture as it can hold; no more can be added, so the sweat just stays on the skin, making us sticky instead of cool.)

For humans, the wet-bulb temperature of an environment shouldn’t be much greater than our normal core body temperature; if it is, the environment will endanger the people experiencing it. It’s a given among scientists that a wet-bulb temperature of 95°F (35°C) is the upper limit of extended human endurability. Anything above that and after a short while, people need to stop working, go indoors or into the shade, or find some air-conditioned place to continue their activities.

Consider the chart below from a 2004 study, “Extremes of human heat tolerance: Life at the precipice of thermoregulatory failure,” by William Kenney et al. Note the temperature point (X-axis) at which human core temperature stops being stable and begins rising out of control (Y-axis). 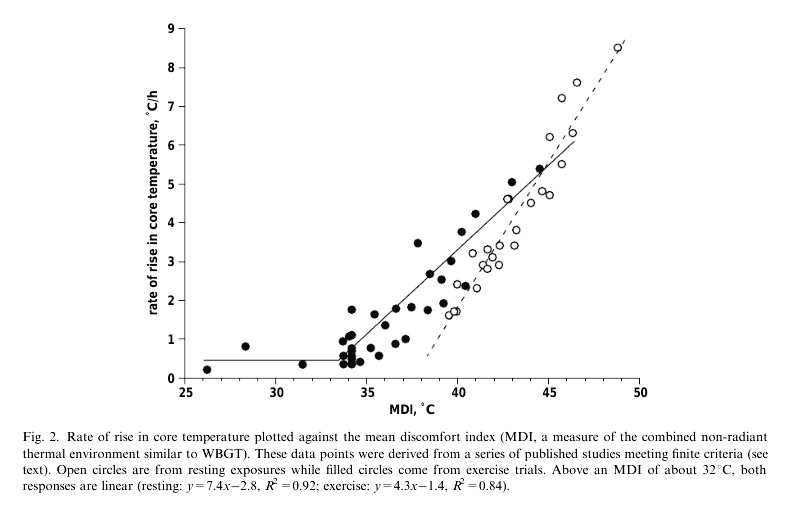 In this graph, MDI on the X-axis is a proxy for WBGT. The Y-axis shows a rate of increase in core temperature per hour. Assuming no ability of the body to cool itself, outside temperatures above 35°C (95°F) will cause overheating, and as you can see, the hotter it is, the faster the body’s core temperature rises. At a wet-bulb temperature of 40°C (104°F), core body temperature rises two to three degrees every hour. At higher temperatures, it rises faster.

Now consider the chart below, Figure 3 from the same study. 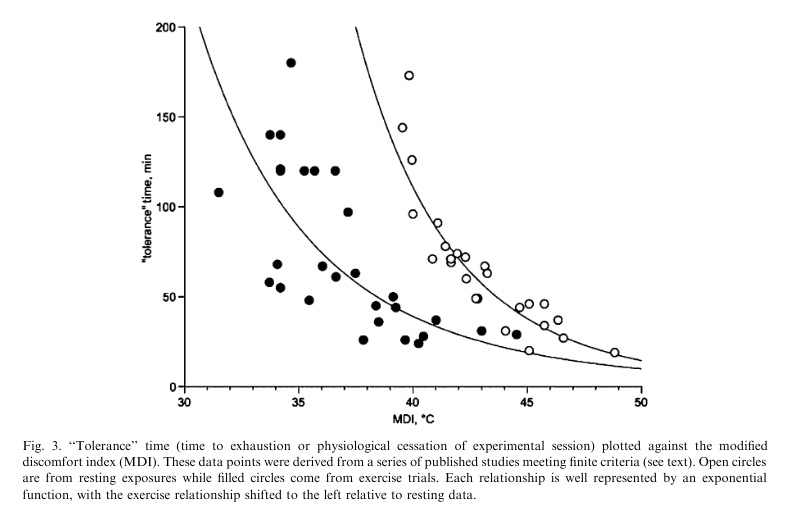 This one graphs the equivalent of WBGT (the X-axis) against human tolerance of it in minutes (the Y-axis). Note that at wet-bulb temperatures of 35°C (95°F), bodies doing work will last less than two hours before exhaustion. At 40°C (104°F), the time to exhaustion is less than an hour. In Baghdad just this year, outside temperatures reached 125°F. Worse is coming.

The graph shows time-to-exhaustion. It’s almost ghoulish to ask time-to-death, but that’s not hard to figure from these charts.

Hyperthermia (overheating) is considered life-threatening when core body temperature reaches 104°F (40°C). From the first chart above (Figure 2 of the study), an outside wet-bulb temperature of 40°C will raise the core temperature of a body doing work — trying to build a house, for example, or a renewable energy power station — at a rate of 3°C per hour.

In other words, after three hours of work in those conditions, most healthy, non-elderly people will experience a medical emergency due to a rise in core body temperature. If the outside temperature is higher, the medical emergency comes sooner. Untreated, disability and death are the likely results.

This is a climate piece, so let’s apply what we know. The following chart shows weeks per year of ambient temperatures above 35°C (95°F) for counties in the U.S. if we continue to burn fossil fuels at a business-as-usual rate. The darker the red, the more weeks per year of these temperatures. (The source is a recent ProPublica piece entitled “New Climate Maps Show a Transformed United States.”) 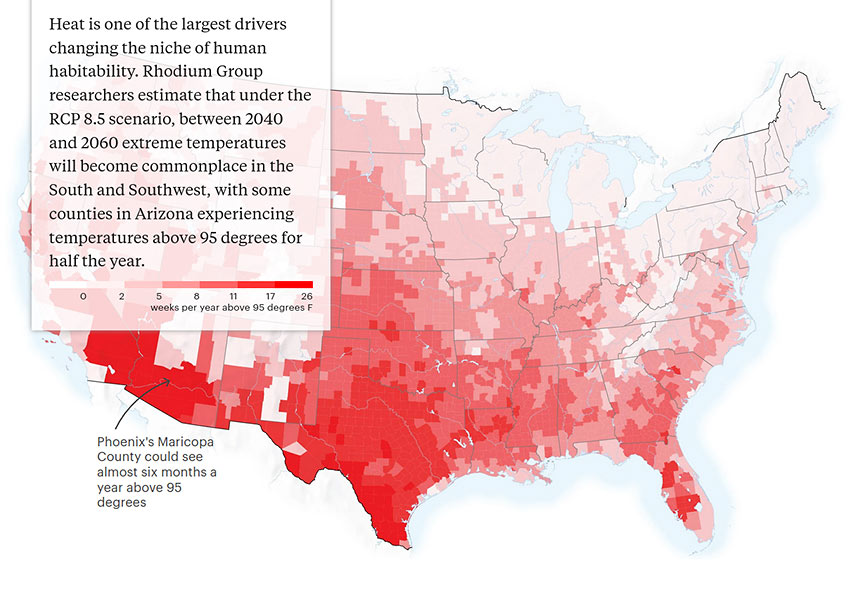 The eye notices the dark red — for example, Phoenix, Arizona, with half a year of above-95° heat. But look at Kansas, with 8-11 weeks above 95 degrees. In Kansas, that’s the heart of the growing season, or was.

For comparison, this is the “niche” or ideal habitable zone in the U.S., the areas where temperature and rainfall have been most favorable to human habitation for the last 6,000 years. 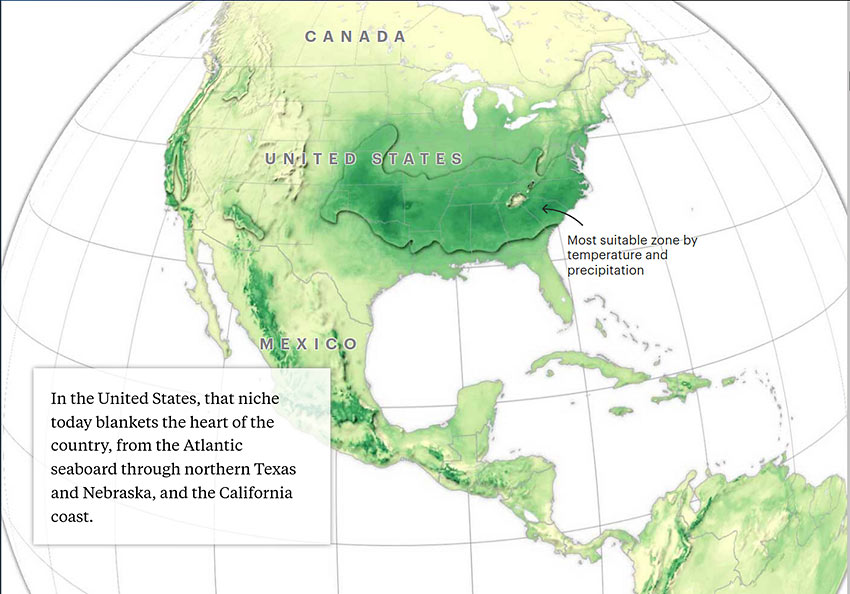 And here’s where that favorable climate “niche zone” will move to by 2070 under business-as-usual conditions. 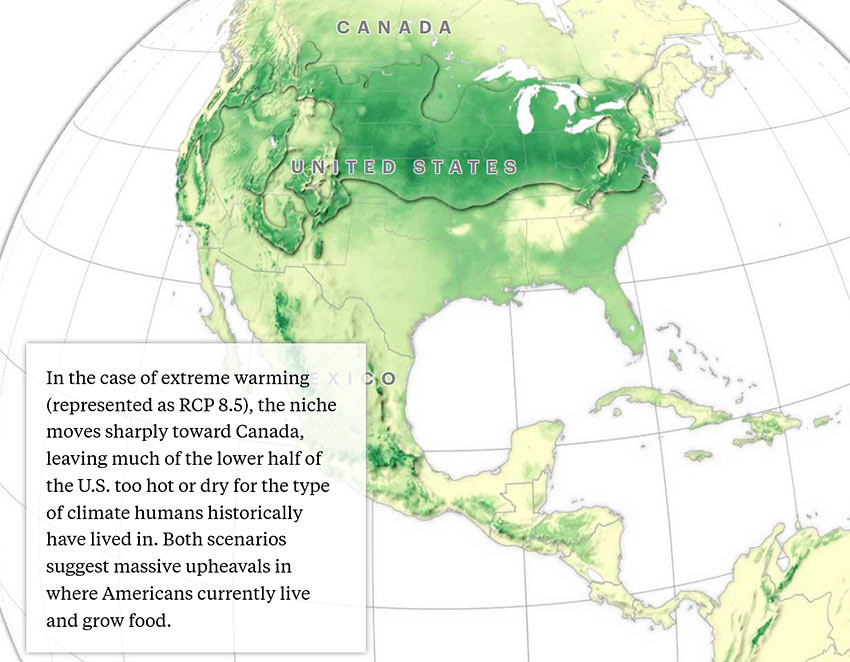 Don’t let the green in the map above fool you. Look again at the map with the red on it, the one showing weeks per year above 95 degrees. As ambient temperatures in those regions rise higher and higher, much or most of the area below the “niche zone” will be uninhabitable without heavy use of electrically powered air conditioning, and to make it habitable, people would have to work long hours outside, in unbearable temperatures, to add the infrastructure needed.

Under those conditions, and knowing things will only get worse, no one will invest a dime in making those areas livable. Nor will anyone move there. Those who can afford to move and change jobs will emigrate. Others will simply flee, like refugees.

Where will they go? What kind of country will we have when this occurs?

Is It Time to Say No and Mean It?

This is going to happen. We won’t have a president who takes climate change seriously enough to begin a Green New Deal, a massive enough climate-and-infrastructure project to deal with what’s coming, until 2024 at the earliest. Who knows who will be running things after that?

Sure Biden, Slayer of Trump, will do “something” about this problem — he has to be seen to do “something” — but the odds that he will do enough, barring a civil revolt against him, are zero. “Enough” is a very large ask, even though “enough” is just the minimum required.

Are you twenty years old today? By the time you’re fifty, much of the area on the map above will be uninhabited — abandoned and feral — while everyone from those regions will crowd north. The U.S. as you know it won’t exist; it will lose territorial integrity (as will China, by the way). Most of our food will come from Canada, if they still like us. And I’m willing to bet the Canadian border will be armed and patrolled — by Canadians.

Is civil revolt — not violence, mind you, but a massive series of general strikes and shutdowns — looking like a viable option all of a sudden? It is to me. It may in fact be the only viable one on the table.

How else do you propose we stop this killing machine we call our ruling class?

(For those who like my work, I’ve launched a Substack site. You can get more information here and here. If you decide to sign up — it’s free — my thanks to you!)