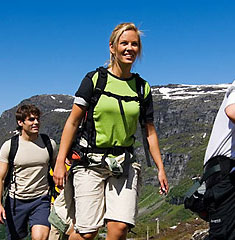 What are some of the “things” or activities that people in Norway do for fun?

ANSWER: Friluftsliv, directly translated as “open air living”, is the Norwegian way of outdoor recreation and an important part of the Norwegian cultural legacy.

What’s one thing the public probably does NOT know about Norway?

ANSWER: Norway has evolved from the poorest nation in Western Europe to the wealthiest – yet we don’t boast or show-off and still live a frugal lifestyle. Of course, we’re the only nation in the world who goes shopping in Sweden for bargains.

A fishing village in the Lofoten Islands. Photo courtesy: Hurtigruten

Share some aspect of Norway as regards to what it has contributed to the world.

ANSWER: I think the Trampe (Norwegian: Sykkelheisen Trampe) is the first and only bicycle lift and is absolutely more fun than anything else. The prototype was built in 1993 in Trondheim, and still in service today. Trampe is a Norwegian verb meaning “to stomp”. We also invented the Cheese slicer.

There is never a shortage of things to do in Nova Scotia. Our attractions celebrate Nova S…