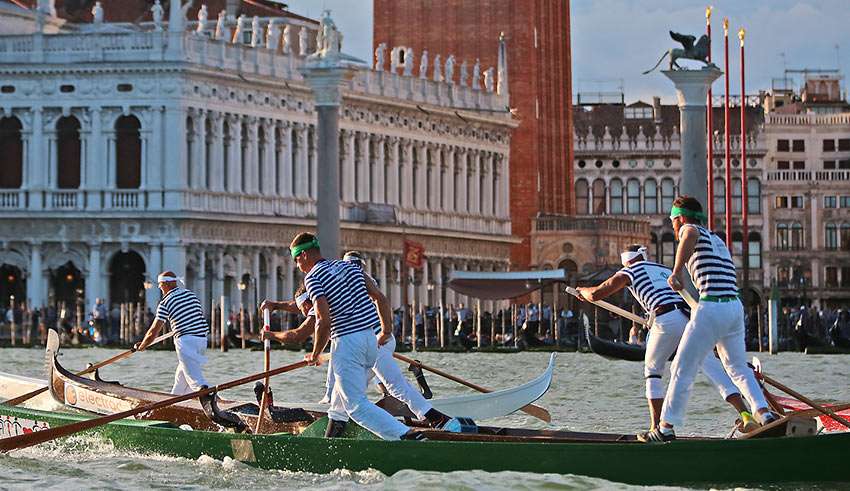 1. Question: What are some of the “things” or activities that the people of Venice do for fun?

Venice is a city built on water, which offers a strong relationship with its citizens in their natural element. So, one of the main activities for a Venetian in their leisure time is to be close to water. Most local people own a boat, either a rowing boat or a motor boat. When the good season arrives, everybody takes out their boats. There are a lot of traditional rowing or sailing boats belonging to the local environment that can be considered as a sort of “piece of art” for the number of skills and knowledge needed for their design and construction. Besides the great  deal of rowing boats in Venice, the most famous one is the gondola, which are conducted in a standing position, something very unique of this city. Even the sailing boats have special shapes in both, the hull and the sail, to be able to cross shallow waters. To keep this tradition alive, there’s many local associations, along with the City of Venice, organizing various events in the lagoon such as regattas, races, parades, etc. Many of the most important traditional feats, still celebrated in the city – Festa del Redentore, Festa de la Sensa, the Historic Regatta – takes place on the water offering citizens and visitors sports and culture at the same time. In more recent years, there had been an important movement entitled, the Vogalonga, a non-competitive race which started as a local protest against motor wave movements. It has become a worldwide appointment for all sorts of rowing boats. Motor wave movement is still a great issue inside the lagoon of Venice because more and more people enjoy outdoor week-ends between the island of the lagoon and at the sea, using motor boats with speed engines that erode salt marshes and hurt the edges of the city.

Venice is built on an archipelago of 118 small islands, formed by 177 canals in a shallow lagoon, connected by 409 bridges. Venice remain the only functioning city in Europe in the 21st century where every form of transport is entirely on water or foot. Also the main public transportation means – motorized waterbuses (vaporetto) – which serve regular routes along the Grand Canal and between the city’s islands. 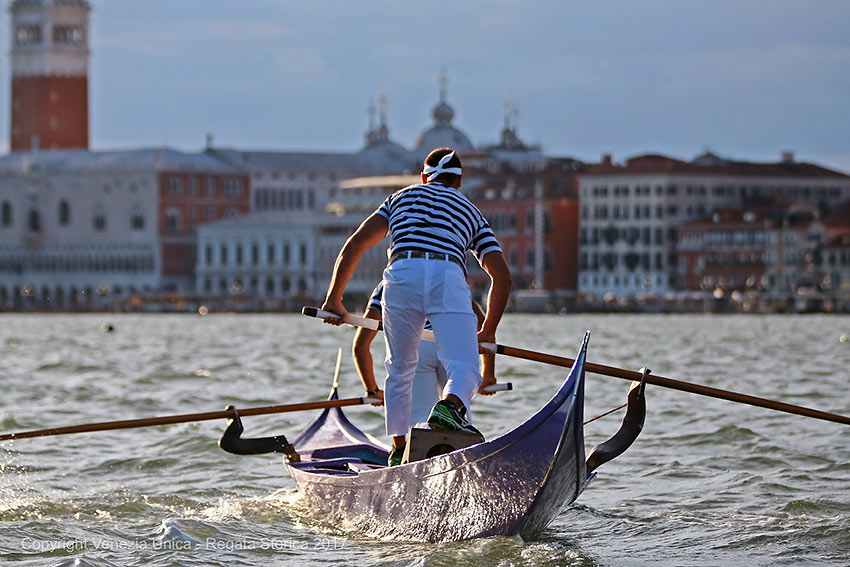 2. Question: What’s one thing the public probably does NOT know about Venice?

Venice is Europe’s largest urban car-free area.  I would like to talk about the role that Venice have had in past as a maritime power of the sea.

“If you see the Grand Turk, talk to him in Venetian.”  This invitation, which today seems unusual to us, was a common motto in Istanbul during the sixteenth century, where not only Italian diplomats and interpreters could freely communicate with the Sultan in the language of Venice.  In short, the Venetian language was the English of the Mediterranean Sea. The reason is that between the Middle Ages and the modern age, the progressive affirmation of the ‘Serenissimo’ (Byzantine name for Venice) in the eastern Mediterranean had been responsible for an unprecedented spread of the Venetian language, which was understood, spoken and written not only in the colonies directly administered by Venice (like Zadar, the Ionian islands and Crete), but also in the surrounding territories, such as areas controlled by the Ottoman enemy. Throughout the Levant (geographical term referring to a large area in the Eastern Mediterranean), Venetian circulated as an international language of navigation, commercial exchanges and even diplomacy. On the one hand, the numerous documents preserved in the Venice Archives and in many other archives of Mediterranean countries bear witness to this; on the other hand, the many words of Venetian origin passed to the Croatian, Albanian, Greek, Arabic and Turkish. In more recent times, one specific Venetian word, among others, was able to become a sort of international passepartout (providing a universal means of passage), globally understood. The word “ciao” derives from the Venetian phrase s-ciào vostro or s-ciào, literally meaning “I am your slave. This greeting is analogous to the medieval Latin Servus which is still used colloquially in parts of Central/Eastern Europe. The expression was not a literal statement of fact, but mostly it meant “at your service”. This greeting was eventually shortened to ciào, lost all its servile connotations and came to be used as an informal salutation by speakers of all classes. The Venetian ciao was adopted by Northern Italians during the late 19th and early 20th century. Later it became common elsewhere in Italy with the spelling ciao. It has since spread to many countries in Europe, along with other items of the Italian culture and later even in the Americas, largely by way of Italian immigrants. 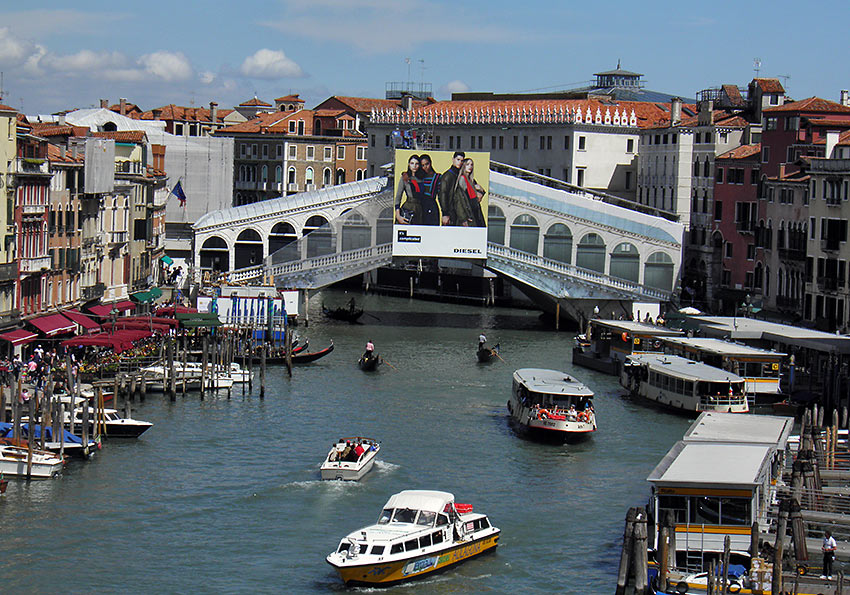 3. Question: Share some aspect of what Venice has contributed to the world.

Being a powerful maritime empire, Venice has contributed greatly in terms exchanges of knowledge and goods between East and West. In the Middle Ages, Marco Polo (1254–1324) voyaged to the Orient as a merchant, and his series of books, co-written by Rustichello da Pisa and titled Il Milione, provided important information of the lands east of Europe, from the Middle East to China, Japan, and Russia. Besides being a source of inspiration for authors, playwrights, and poets (from Shakespeare to Thomas Mann, from Henry James to Evelyn Waugh and Marcel Proust, just to mention a few), Venice has long been at the forefront of the technological development of printing and publishing. The city was the location of one of Italy’s earliest printing presses, established by Aldus Manutius (1449–1515). From this beginning Venice developed as an important typographic center and even as late as the 18th century was responsible for printing half of Italy’s published books. In this context, Venice was a good environment for cultural and social achievement. Elena Lucrezia Cornaro Piscopia (5 June 1646 – 26 July 1684), a Venetian philosopher of noble descent, was the first women in the world to receive an academic degree from a university and in 1678, received a Ph.D. degree. Elena was considered to be an expert musician. In addition to mastering the sciblis of her time, Elena mastered the harpsichord, the clavichord, the harp, and the violin. Her skills were shown by the music that she composed in her lifetime. She was a member of various academies and was esteemed throughout Europe for her attainments and virtues.

Even the complex system of government of the Republic of Venice, which lasted from 697 to 1797,  has been a model of governance and a reference to look at.  Resulted from numerous successive stratifications originating mainly in the XI-XIII centuries, the government of the Serenissima was in constant search of a balance and a mutual control between the various organs of the state. In 1784, the Republic of Venice was the first government to recognize the independence of the United States of America. In 1786, Thomas Jefferson arrived in Venice with a delegation composed of Thomas Moore and Benjamin Franklin to examine the laws of the Serenissima and later to adapt them, after appropriate modifications, to the Constitution of the United States.

Technology was also a very advanced aspect in Venice, in particular related to the maritime world. For example the Venetian Arsenal, heart of the Republic’s power, which occupies almost a fifth of the entire city area, is also an extraordinary example of ante litteram ‘factory’, understood in a modern sense, in regards the division of space and the organization of the work. A model for modern assembly lines, that are common methods of assembling complex items such as automobiles and other transportation equipment, household appliances and electronic goods. 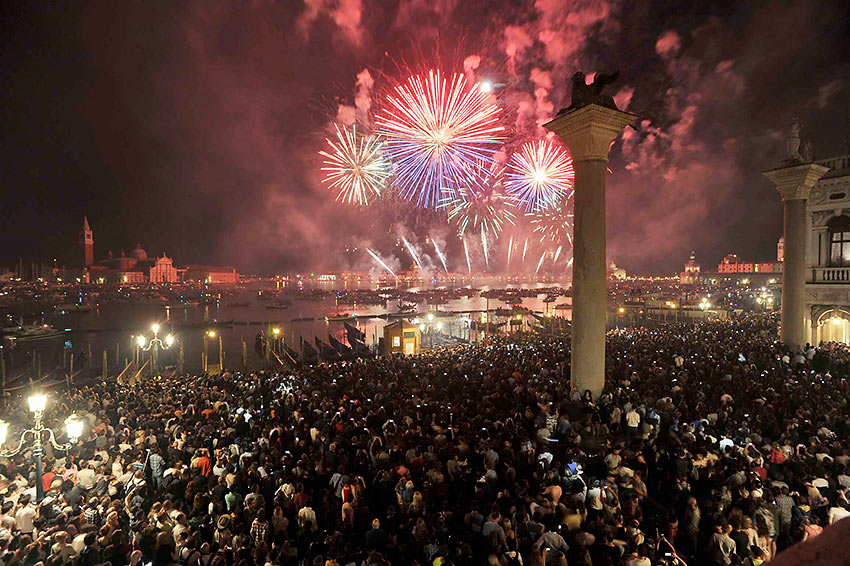