Since the 13th century, it’s been inextricably linked to all of the most important historical, political and religious events in Mother Russia. The oldest part of Moscow, it was the center of the Russian Orthodox Church and served as the residence of the Grand Prince of the Rus. Today, behind its 2.25km of high, red-brick walls and 20 towers, President Vladimir Putin calls all of the shots as he governs the largest country, geographically, on the planet. 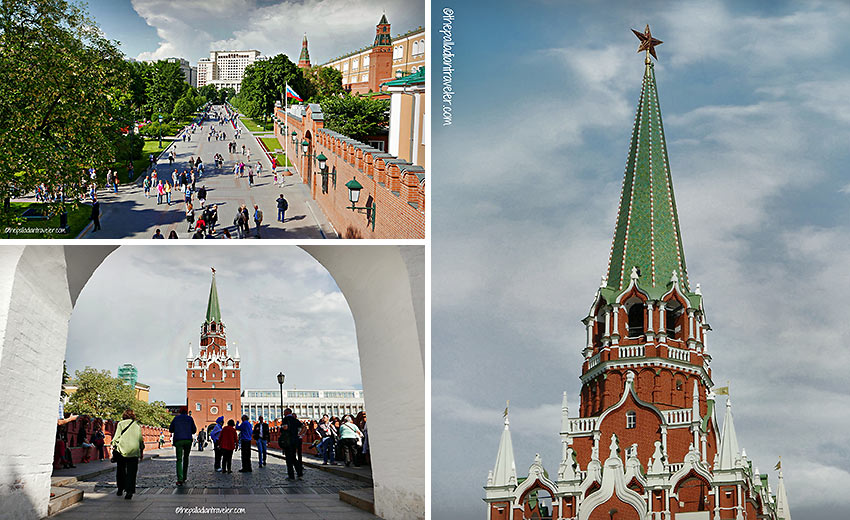 “Welcome to the Kremlin,” Vera, our expert Moscow guide, announces in our earbuds as I, a photojournalist invited by Insight Vacations to experience its Easy Pace Russia journey, along with 22 bona fide travelers are fast-tracked through the turnstiles and security scanners inside the visitor’s center.

Following the “umbrella” along a carriageway above well-manicured Alexander Park, we pass through the arch of Trinity Tower, one of five towers topped with a one-ton, ruby-glass star, and enter into the 68 acre-fortress, the largest of its kind in Europe, brimming with history and architectural marvels. 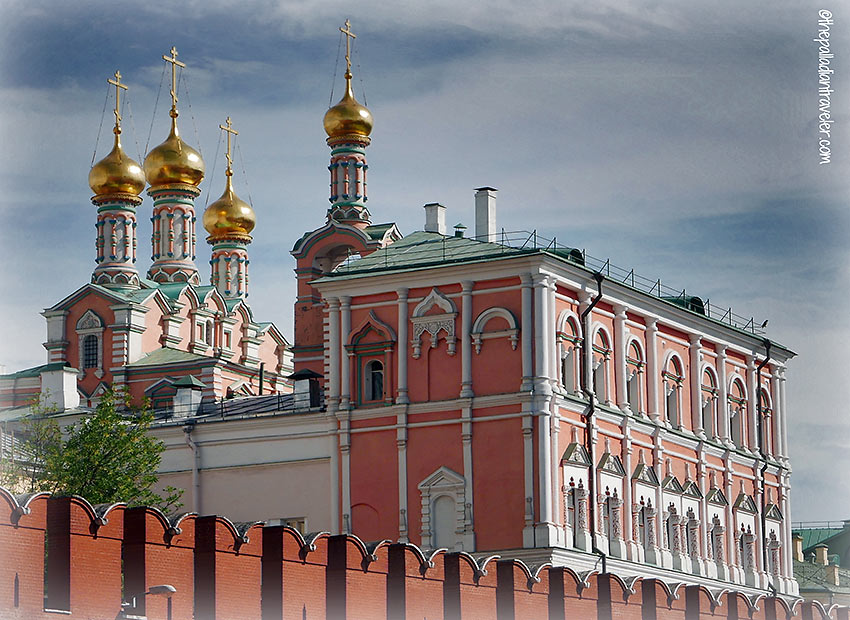 The jaw dropping begins immediately as we spy the colorful, 17th century Glorification of the Virgin Church with its four gilded domes, the first of many decorative cupolas we’ll spot today on this 90-minute stroll around ground-zero of Russian life and culture.

“Sitting atop Borovitsky Hill in full view of the Moscow River to the south and Red Square to the east,” explains Vera, “the Kremlin means ‘fortress inside a city’ and it gave rise to a small settlement in the 12th century that has grown into the most populated metro area in Europe.” 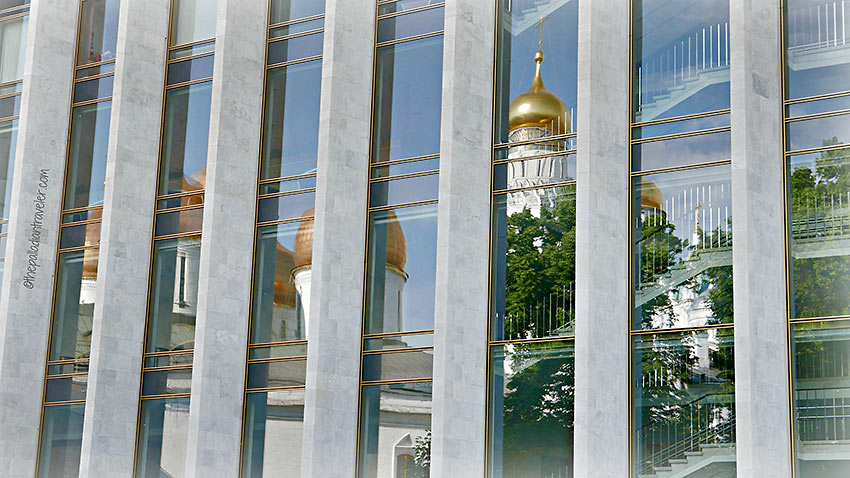 Just a few paces inside the Kremlin grounds we’re faced with an eyesore, a piece of architecture that is completely out of place in this UNESCO World Heritage Site: the State Kremlin Palace. Originally named the Palace of Congresses when it was completed in 1961, the modern, 6,000-seat, concrete-and-glass hall was where the Communist Party of the old Soviet Union held its, well, congresses. Despite calls to send in the wrecking ball, Nikita Khrushchev’s “gift” to the Kremlin now serves as a venue for ballet and classical and pop music concerts. Covering my eyes, I walk away as quickly as I can. 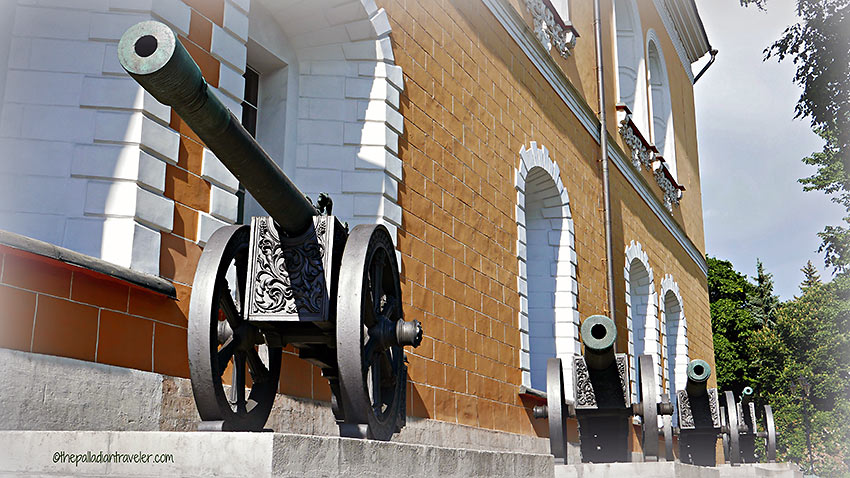 The geographic and historic hub of Moscow, the Kremlin greets its visitors with a group of cannons lined up outside the Arsenal that were left behind by a beleaguered French army when Napoleon limped unceremoniously back to Paris following a bloody attempt to defeat Russia during the Napoleonic Wars of 1812. The Arsenal, a building commissioned by Tsar Peter the Great, houses the Kremlin Regiment, President Putin’s main security service. 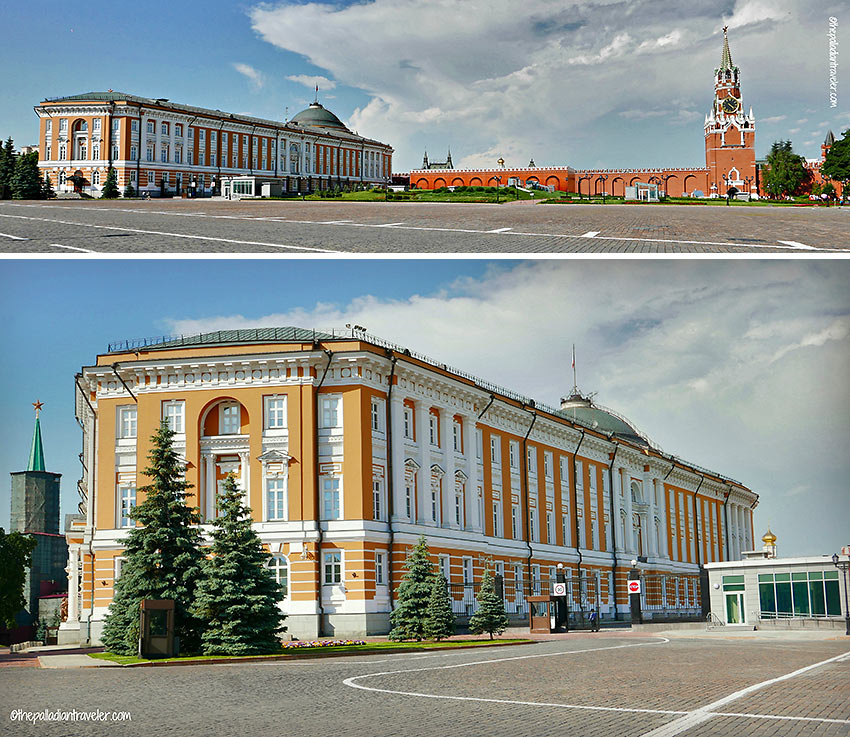 While President Donald Trump of the United States officially resides and works at the White House in Washington, D.C., and unofficially at a few of his golf resorts, the Russian Federation’s President Putin resides and works out in the ‘burbs, but occasionally conducts business inside the triangular-shaped Kremlin Senate building. “Because his motorcades caused major traffic congestion around Moscow,” notes Vera, “a helipad was built in the Tainitsky Garden several years ago and President Putin now flies into an out of the Kremlin as he pleases aboard his twin-turbo Mi-8 helicopter.” 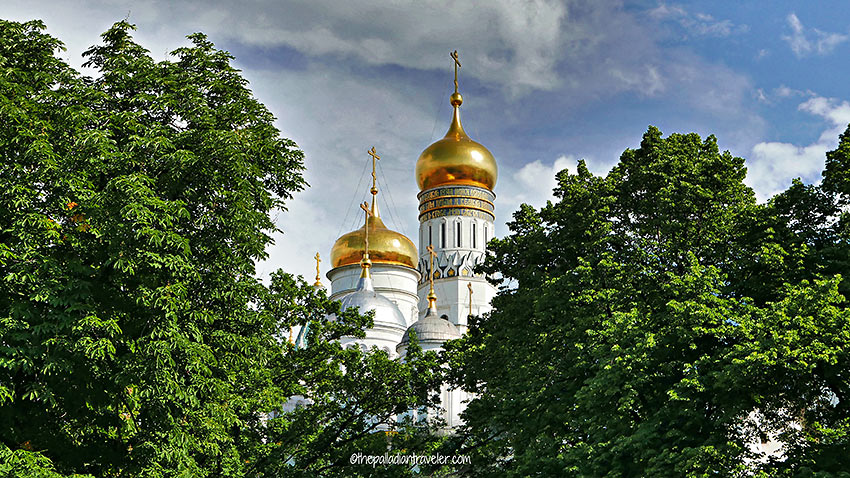 Most, if not all, tourists come to the Kremlin to marvel at the collection of onion-shaped domes that top three Orthodox cathedrals and a bell tower positioned around, you guessed it, Cathedral Square (Sobornaya Ploschad): the Dormition, the Archangel Michael, the Annunciation and the Ivan the Great Bell Tower. This square is the absolute star of our walking tour with its postcard-perfect scenes. 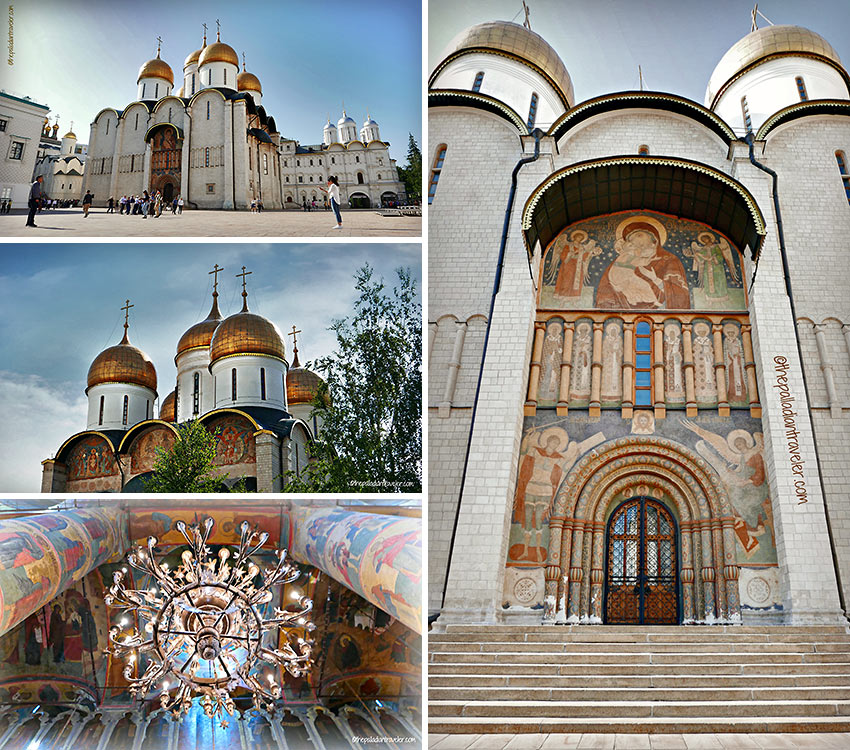 Built several times over, the Dormition, with its six pillar-five dome design, is the oldest of this trio of cathedrals. Desecrated by French troops during the aforementioned invasion of Russia, it was the place for the coronation of the tsars. We take our sweet time to admire and take in the details of the frescoes and iconostases. 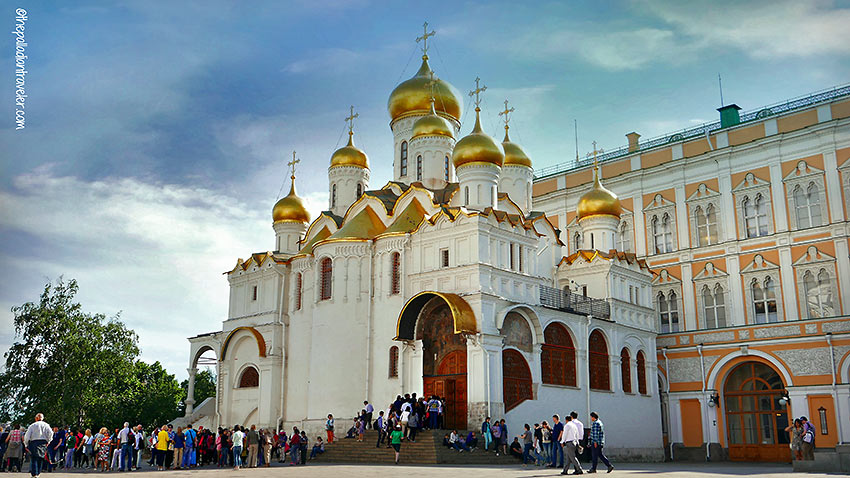 Annunciation Cathedral, the middle born of our trio standing in Sobornaya Ploschad, is the most ornate in design with its nine, count ’em, nine gilded domes. Filled with restored 15th century frescoes, the cathedral hosts the “Treasures and Antiquities of the Moscow Kremlin” exhibition. Our group stays outside and just admires. 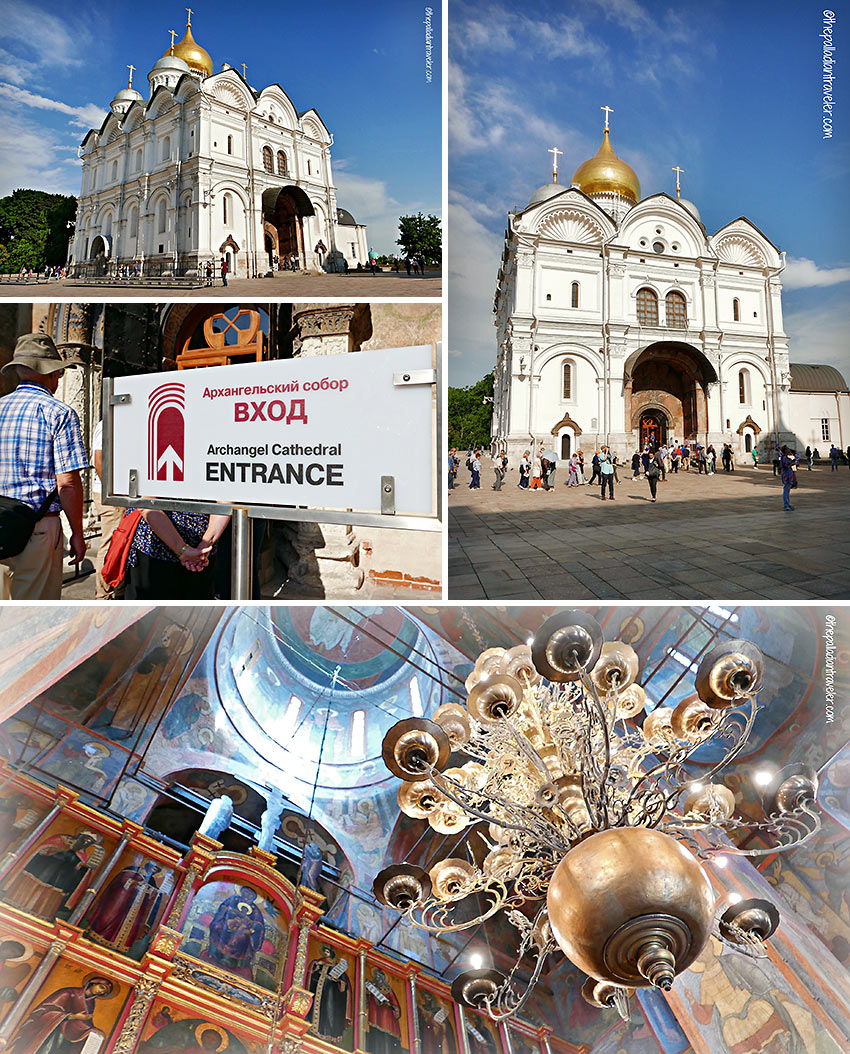 The youngest of the Kremlin’s treasured cathedrals, at only 509 years old, is Archangel Michael. Like the Dormition, it, too, is a six pillar-five dome design filled with beautiful frescoes and iconostases. Once built, Archangel Michael immediately became a royal necropolis and is the final resting place of almost all of the tsars prior to Peter the Great, including Ivan the Great.

Speaking of Ivan, the Great Bell Tower, adjacent to the Dormition belfry, was erected in his honor. Standing 81m tall with 24 bells, it was the tallest bell tower in the country. As time passed other bell towers were erected with greater height. Today, the Ivan the Great Bell Tower is listed as the 16th tallest in the country, but it still looks like it could touch the heavens. 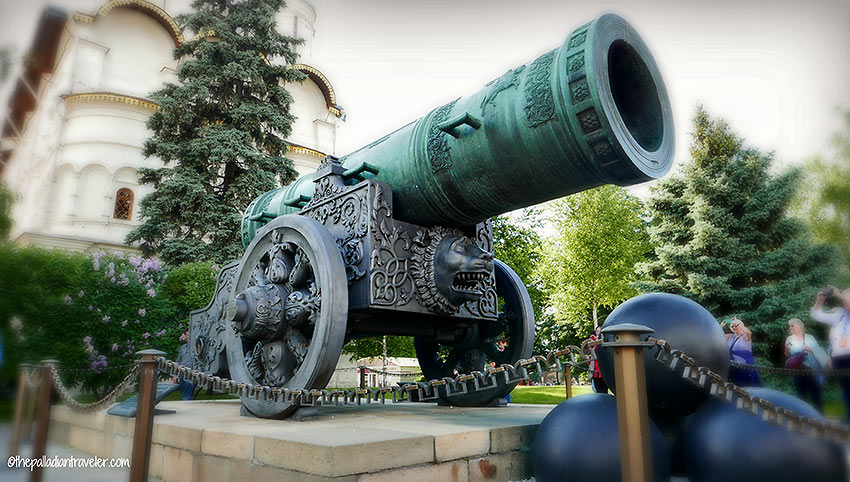 As we depart the “fortress within a city,” I leave you with two interesting facts gleaned during this stroll around the Kremlin. First, the largest caliber cannon, the Tsar Cannon — 6m long, 40 tons of weight and an 890mm barrel — has NEVER, EVER been fired because it was just too heavy to roll into battle. And, secondly, the Tsar Bell, the largest bell ever made, at more than 200 tons, has NEVER, EVER been rung. A large piece of the bell cracked off during a fire shortly after it was cast, couldn’t be repaired and was, therefore, deemed useless. I guess size really does matter. 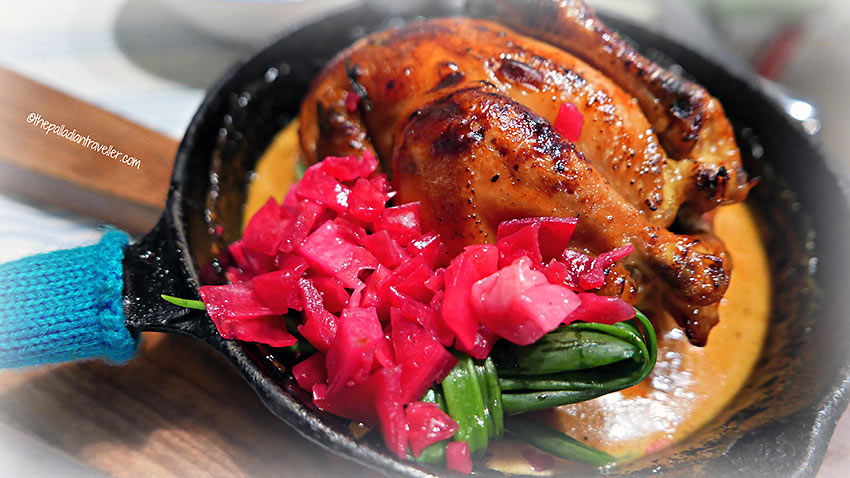 See you in a few hours when we put our knives and forks to the test and savor some Ukrainian dishes at a popular Muscovite restaurant that we’ll file under Odessa.